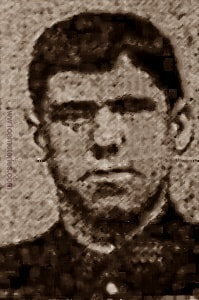 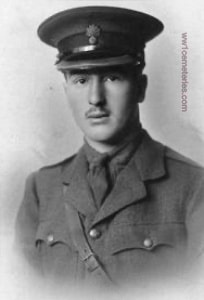 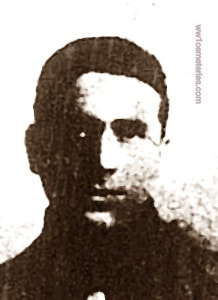 ​His headstone bears the inscription; "Yet Again We Hope To Meet Thee When The Day Of Life Is Fled."

Gerald left a wife and son, they lived at 10 Carter Street, Burnley.

He had enlisted on 1st September 1916 and prior to that he worked for Massey's Burnley Brewery. He was originally from Oxfordshire.
​
A fellow Burnley soldier, whilst convalescing in hospital wrote to a relative:

"I am sorry to say that my old pal Jerry got killed in the advance on the last day in July. Corpl. Sharples told me that he had no pain as it was so sudden, a whiz-bang hitting him and killing him instantly. He was one of a party on trench mortars." 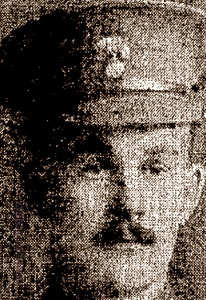 His headstone bears the inscription; "Their Name Liveth Forever More." 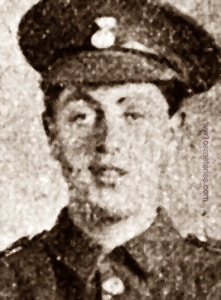 His headstone bears the inscription; "Thy Will Be Done."
​ 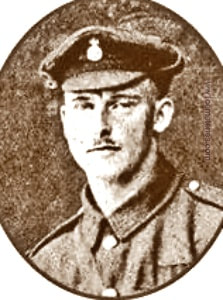 His headstone bears the inscription; "The Face Of Death Is Toward The Sun Of Life." 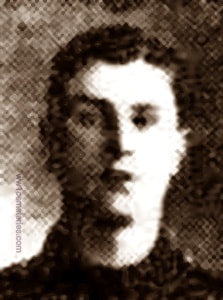 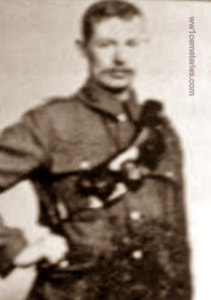 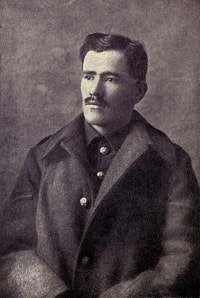 Son of Patrick and Anne Ledwidge, of Slane, Co. Meath. A prolific poet noted for his pastoral pieces about Ireland; his last poems made subtle reference to war.

Information below provided by Wikipedia .
In France by Francis Ledwidge (1917)

The silence of maternal hills
Is round me in my evening dreams;
And round me music-making rills
And mingling waves of pastoral streams.

Whatever way I turn I find
The path is old unto me still.
The hills of home are in my mind,
And there I wander as I will.

Ledwidge was born at Janeville, Slane, in Ireland, the eighth of nine children in a poverty-stricken family. His parents, Patrick Ledwidge (the Ledwidge family, from Shropshire, was granted land in Meath after the Norman invasion) and wife Anne Lynch (1853–1926), believed in giving their children the best education they could afford. But when Francis was only five his father Patrick died prematurely, which forced his wife and the children out to work at an early age. Francis left the local national school aged thirteen, and while he continued to educate himself, he worked at what work he could find, as farm hand, road mender and supervisor of roads, as copper miner (sacked for organising a strike for better mining conditions, three years before the general 1913 strike, and was a trade union activist since 1906) and shop assistant. Appointed secretary of the Slane branch of the Meath Labour Union (1913–14) he had aspirations of permanent white-collar work.

Strongly built, with striking brown eyes and a sensuous face, Ledwidge was a keen poet, writing where ever he could – sometimes even on gates or fence posts. From the age of fourteen his works were published in his local newspaper, the Drogheda Independent reflecting his passion for the Boyne Valley. While working as a road labourer he won the patronage of the writer Lord Dunsany after writing to him in 1912, enclosing copybooks of his early work. Dunsany, a man of letters already well known in Dublin and London literary and dramatic circles, and whose own start in publishing had been with a few poems, promoted him in Dublin and introduced him to W.B. Yeats with whom he became acquainted.
​
Dunsany supported Ledwidge with money and literary advice for some years, providing him with access to and a workspace in Dunsany Castle's Library where he met the Irish writer Katharine Tynan, corresponding with her regularly.Dunsany later prepared his first collection of poetry Songs of the Fields, which successfully appealed to the expectations of the Irish Literary Revival and its social taste for rural poetry.

Ledwidge was a keen patriot and nationalist. His efforts to found a branch of the Gaelic League in Slane were thwarted by members of the local council. The area organiser encouraged him to continue his struggle, but Francis gave up. He did manage to act as a founding member with his brother Joseph of the Slane Branch of the Irish Volunteers (1914), a nationalist force created in response to the arming of the Ulster Volunteers who swore to resist the introduction of Home Rule for Ireland by force, if need be. The Irish Volunteers were set up to prevent their belligerence and to ensure Home Rule would come to pass.

On the outbreak of World War I in August 1914, and on account of Ireland's involvement in the war, the Irish Volunteers split into two factions, the National Volunteers who supported John Redmond's appeal to join Irish regiments in support of the Allied war cause and those who did not. Francis was originally of the latter party. Nevertheless, having defended this position strongly at a local council meeting, he enlisted (24 October 1914) in Lord Dunsany's regiment, joining 5th battalion Royal Inniskilling Fusiliers, part of the 10th (Irish) Division. This was against the urgings of Dunsany who opposed his enlistment and had offered him a stipend to support him if he stayed away from the war. Some have speculated that he went to war because his sweetheart Ellie Vaughey had found a new lover, John O'Neill, whom she later married, but Ledwidge himself wrote, and forcefully, that he could not stand aside while others sought to defend Ireland's freedom.

Ledwidge seems to have fitted into Army life well, and rapidly achieved promotion to lance corporal. In 1915, he saw action at Suvla Bay in the Dardanelles, where he suffered severe rheumatism. Having survived huge losses sustained by his company in the Battle of Gallipoli, he became ill after a back injury on a tough mountain journey in Serbia (December 1915), a locale which inspired a number of poems.

Ledwidge was dismayed by the news of the Easter Rising, and was court-martialled and demoted for overstaying his home leave and being drunk in uniform (May 1916). He gained and lost stripes over a period in Derry (he was a corporal when the introduction to his first book was written), and then, returned to the front, received back his lance corporal's stripe one last time in January 1917 when posted to the Western Front, joining 1st Battalion, Royal Inniskilling Fusiliers, part of 29th Division.

Ledwidge continued to write when feasible throughout the war years, though he lost much work, for example, in atrocious weather in Serbia. He sent much of his output to Lord Dunsany, himself moving on war assignments, as well as to readers among family, friends and literary contacts.

On 31 July 1917, a group from Ledwidge's battalion of the Royal Inniskilling Fusiliers were road-laying in preparation for an assault during the Third Battle of Ypres, near the village of Boezinge, northwest of Ieper (Ypres). While Ledwidge was drinking tea in a mud hole with his comrades, a shell exploded alongside, killing the poet and five others. A chaplain who knew him, Father Devas, arrived soon after, and recorded "Ledwidge killed, blown to bits."
​
The poems Ledwidge wrote on active service revealed his pride at being a soldier, as he believed, in the service of Ireland. He wondered whether he would find a soldier's death. The dead were buried at Carrefour de Rose, and later re-interred in the nearby Artillery Wood Military Cemetery, Boezinge, (where the Welsh poet Hedd Wyn, killed on the same day, is also buried). A stone tablet commemorates him in the Island of Ireland Peace Park, Messines, Belgium. His work as "peasant poet" and "soldier poet", once a standard part of the Irish school curriculum, faded from view for many decades of the 20th century. Its intensity, coupled with a revived interest in his period, has restored it to life. 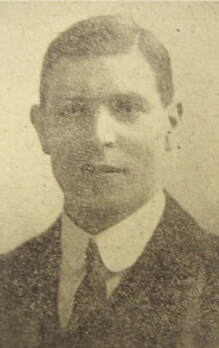 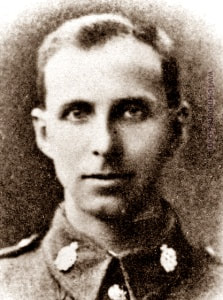 His headstone bears the inscription; "Ever Remembered." 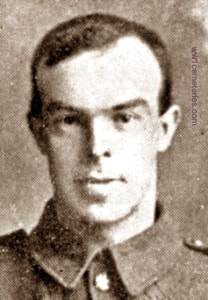 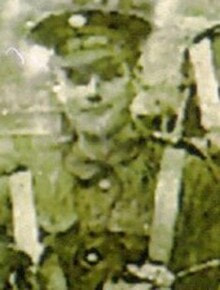 Jack first joined The Leinster Regiment in Portlaoise Barracks, though he was badly treated there. He met some friends who told him Irish Guards were looking for tall men. He deserted from Portlaoise, went home and buried his uniform. He went with three friends to the Barracks in Mullingar and joined the Irish Guards. He joined with his cousin John Redmond, and he was close by, crossing "no mans land" when great uncle Jack was killed by a German shell. John Redmond was the only survivor. 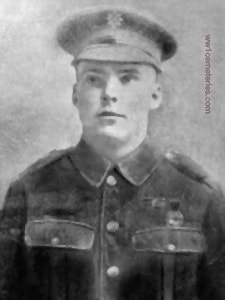 His headstone bears the inscription; "May His Soul Rest In Peace; Amen."