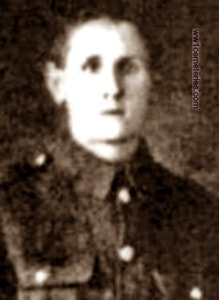 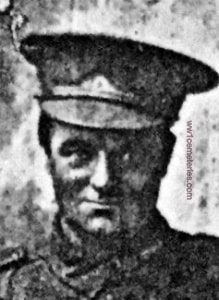 ​He was killed on the corduroy track going up to Westhoek Ridge whilst on an 8 horse team. All four men and the horses were killed outright when two shells dropped amongst them. 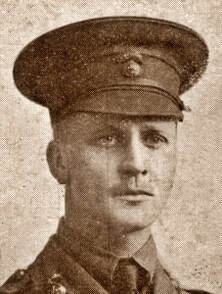 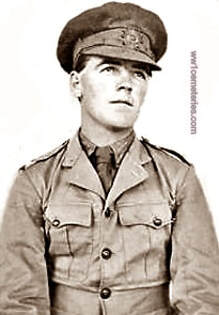 ​Son of Alfred and Louisa Baldock, of Jeparit, Victoria.

His headstone bears the inscription; "Father In Thy Gracious Keeping Leave We Now Our Loved One Sleeping."

A fellow member of the 8th Battalion recalled;

"I heard this man was hit in the jaw and taken to the Dressing Station close by together with a man named Crick*, who had both legs blown off. Both were seen there by a stretcher bearer who told me of it. The Dressing Station was blown up shortly afterwards and Crick was reported missing. He came from Victoria and was a great favourite with all." 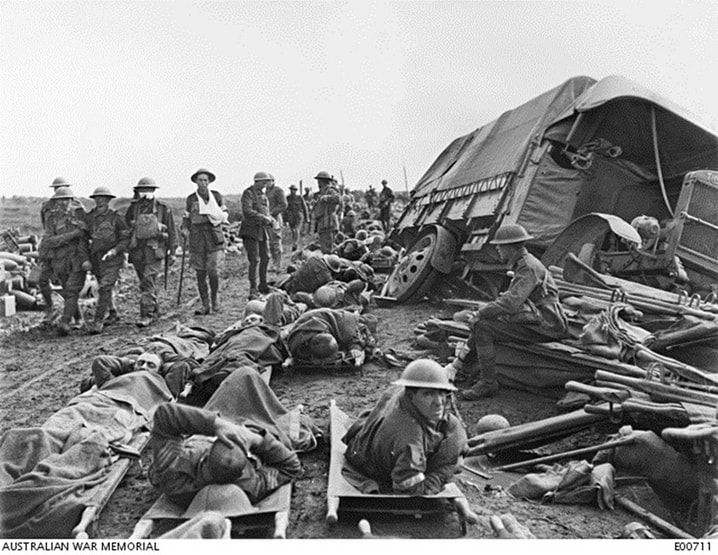 A scene on the Menin Road near Hooge, looking towards Birr Cross Roads, during the battle on 20 September 1917. The wounded on the stretchers are waiting to be taken to the clearing stations; others able to walk are making their way along the road as far as possible. Identified are: Major (Maj) G A M Heydon MC, Regimental Medical Officer of the 8th Battalion (fifth from the left with his arm in a sling). To his left is Private W Bain and next to him is Private (Pte) 'Spud' Murphy. To Pte Murphy's left (wearing a pack) is 58 Lance Corporal (LCpl) Roy Arthur Findlay MM, all are members of the 1st Field Ambulance. Shortly after the photograph was taken a shell landed in approximately the area where Maj Heydon and Pte Murphy had been standing. The shell killed most of the wounded on stretchers and LCpl Findlay was blown under the truck, shown lying on its side to the right. 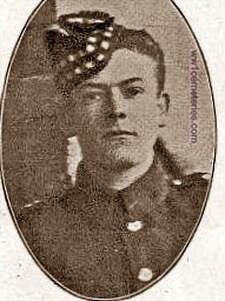 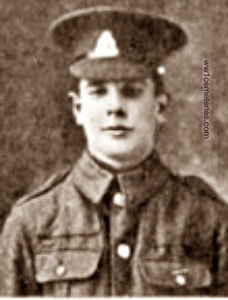 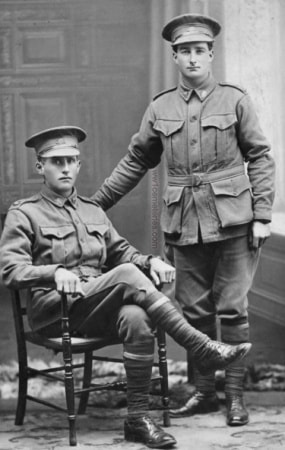 4128 Private, James Augustine Hanscombe (left) and his best mate, 4068 Pte Joseph Britten, 17th Battalion. Pte Hanscombe was later awarded the Military Medal (MM) for attempting to rescue Pte Britten, who was killed in action. Both farmers of Bega NSW, they embarked with the 10th Reinforcements on 8 March 1916. They transferred to the 5th Divisional Ammunition Column (5 DAC). Driver Britten's service number changed to 4068A; he also served with the 15th Field Artillery Brigade before returning to the 5 DAC. He was killed in action on 6 October 1917 and buried at Birr Cross Roads Cemetery at Zillebeke, Belgium. Driver Hanscombe's MM was awarded for bravery and devotion to duty, although heavily shocked, while delivering ammunition along the Menin Road whilst the column was being heavily shelled. Dvr Britten was the driver killed whilst delivering ammunition. 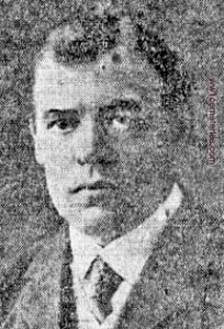 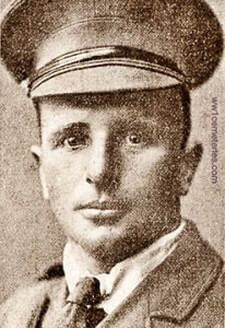 His headstone bears the inscription; "Time Changes Many Things But Memory Like The Ivy Clings."

A monumental worker from Yatala, South Australia, prior to enlistment, he embarked with the 7th Reinforcements from Adelaide on 27 June 1916 aboard HMAT Malakuta (A57) for Devonport, England. Following training in England he proceeded to France and joined his battalion on the Western Front near Dernancourt on 20 December 1916. A week later he was attached to the ANZAC Light Railway for six months before rejoining his unit near Bapaume. Pte. Coates was wounded in action near Zonnebeke, Belgium after being hit by an eighteen pounder shell which shattered his arm.

"I was right alongside him when Coates got his arm broken in supports, Passchendaele sector. He was delirious as I helped to carry him forward to the Dressing Station, right behind the front line (about 200 yards). He was taken further back to a Casualty Clearing Station by Divisional Stretcher Bearers and I understand he was then killed outright by a shell at the C. C. S., I was in the same platoon." 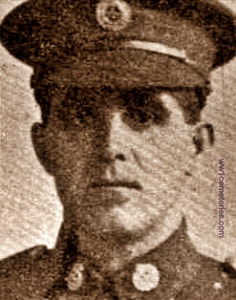 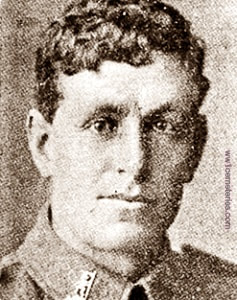 Husband of Mrs. A. M. De Blois, of Wanganui. 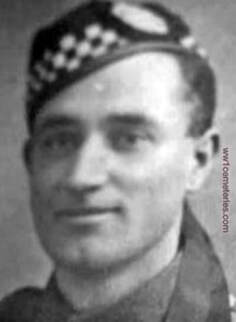 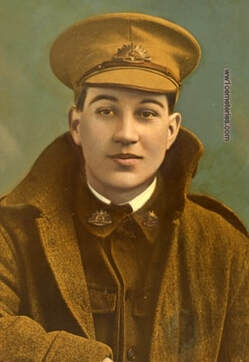 "Douglas was killed by a shell near Ypres (Anzac House). He was buried on the field, 20th September 1917,. Not in any cemetery. Death was instantaneous as his head and shoulders were blown off. Ground was held"

Three Douglas brothers (Below, left to right): 1800 Private Kenneth George Douglas of Erskineville, NSW; 848 Lance Corporal Alan Edward Douglas of Marrickville, NSW; 2879 Lance Sergeant Gordon Leslie Douglas of Woollahra, NSW. A motor mechanic prior to enlistment, Pte Kenneth Douglas enlisted under the name George Douglass and embarked with the 2nd Reinforcements of the 35th Battalion from Sydney on HMAT Port Sydney on 4th September 1916. After transferring to the 17th Battalion, he was killed in action on 20th September 1917 and was buried in the Birr Cross Roads Cemetery, Belgium. L Cpl Alan Douglas was employed as a printer prior to enlistment and embarked from Sydney with C Company, 20th Battalion on HMAT Berrima on 25th June 1915. On 30th July 1916 he was killed in action and was buried in the Pozieres British Cemetery, Ovillers-La- Boisselle, France. L Sgt Gordon Douglas, a labourer prior to enlistment embarked as a Private (Pte) with the 6th Reinforcements, 17th Battalion, from Sydney on HMAT Euripides on 2nd November 1915. Later promoted to Lance Sergeant, he was killed in action in France on 15th April 1917. He was buried near where he fell but after the Armistice his grave could not be located and he is commemorated on the Villers-Bretonneux Memorial. 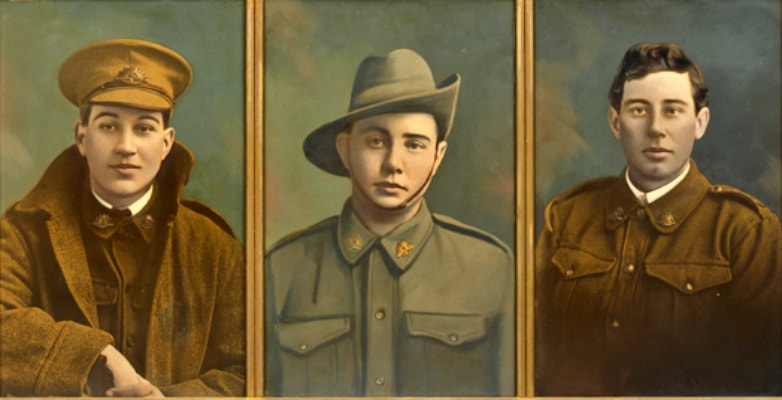 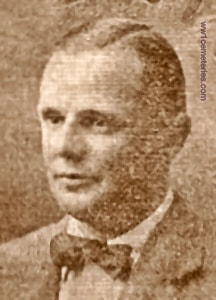 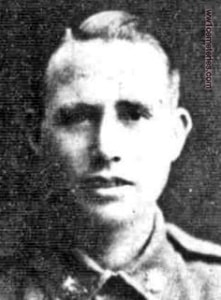