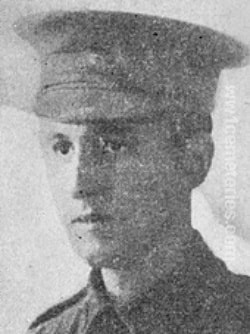 His headstone bears the inscription "His Duty Done" 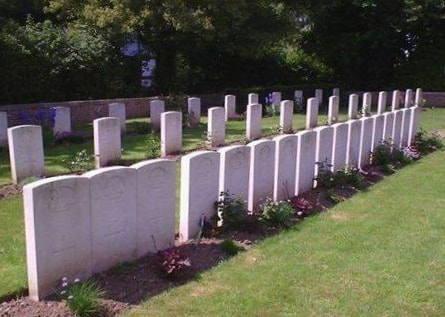 Shaw (Sonny)Wood’s grave is the first of the three which are close together.
‘FIRST BANDMASTER OF THE CLONCURRY CONCERT BAND 1915’
BANDMASTER SERGEANT SHAW WOOD
(Affectionately known as “Sonny”)
SER. No. 56.  20th Battalion   5th Company

Next of Kin: Mother, Mrs. Sarah Wood, of Cloncurry


Bandsman Sergeant and Ambulance Bearer
​
“The 20th Battalion was raised at Liverpool in New South Wales in March 1915 as part of the 5th Brigade. A sprinkling of the 20th's original recruits had already served with the Australian Naval and Military Expeditionary Force (AN&MEF) in the operations to capture German New Guinea in 1914. The 20th left Australia in late June, trained in Egypt from late July until mid-August, and on 22nd August landed at Anzac Cove. Arriving at Gallipoli just as the August offensive petered out; the 20th's role there was purely defensive. From 26 August, until its withdrawal from the peninsula on 20 December, the 20th Battalion was responsible for the defence of Russell's Top.  After further training in Egypt, the 20th Battalion proceeded to France. It entered the trenches of the Western Front for the first time in April 1916”.–

His father, George Shaw Wood had died in 1899, aged only 36, and was from England. His mother was formerly Sarah Caroline Jordan.
Sonny had three sisters, Florrie, later Mrs. Lewis, living in Ipswich, Queensland,  Ella - later Mrs. Chester, of Richmond, North Queensland,  and Lily -  and a younger brother Stanley.

Before leaving Sydney, he wrote to his mother and sisters, wishing Ella a happy birthday and telling them. “When we get to the Front, I have charge of 16 stretcher bearers and we are to carry on from field to Base Hospital.  On Wednesday next, my band has been picked from the remaining four to play at Parliament House Sydney at a big function.”
​
Embarked Sydney H.M.A.T. A35 ‘BERRIMA’  26th June 1915

Sonny was killed in action in France 5th May 1916

Effects returned in Package No. 245

Disc, Metal Watch, Watch protector, Photos, Strap, Gold ring engraved “Florrie”
Florrie is the name of Sonny’s eldest sister.
A letter was written on Mrs. Wood’s behalf to Senator Pearce, the Minister for Defence, Melbourne, requesting the return of any of Sonny’s belongings.  The writer says “Amongst these possessions was his Cornet which the mother prizes more than all else.”    This letter was written in July, 1916.  A separate package contained his Cornet in its case.  It does appear that the Cornet was returned safely, as Mrs. Wood acknowledged the receipt of 2 parcels in January, 1917 signing it.
‘Yours gratefully,  Mrs. S. C. Wood, Cloncurry’.

With regard to his medals, there was still a problem with these being received by the family, Mrs. Wood having died in 1919 and the rule being that both parents having died, they had to go first to the eldest surviving brother of a deceased soldier, then the next eldest and so on, and then to any sisters in order of birth. Letters sent to Stanley Wood in Sydney remained unanswered. He had also fought on the Western Front and was repatriated to Australia in 1919.  In 1923 his sister Ella (Mrs. Chester), was still enquiring about them.  War Records show that between  1919 – 1923 Medals were forwarded to returned soldiers and also to relatives of deceased soldiers.

7th June 1916,   Townsvlle Daily Bulletin    CLONCURRY  NOTES  “News reached here yesterday to the effect that Sergeant S. Woods (sic) of the 20th Battalion, had been killed in battle on May 5. Deceased enlisted at Lithgow whither he had gone from Cloncurry. He was well-known on Charters Towers, as a bandsman, and was the firstbandmaster of the present Cloncurry concert band. He was a great favorite whilst here. On the news being received here the flags in the town were lowered to half mast out of respect for the fallen hero. "Son" Wood’s many friends will be sorry to hear that he has gone under, whilst fighting for British freedom......”

We have received from the Charters Towers Queensland Bandmaster an excellent photographic “In Memoriam" card of the late *G.W. (Sonny). Woods*, band sergeant of the 20th Battalion Band who enlisted from Lithgow and was well known here. The late soldier bandsman was a native of Charters Towers, and the bandsmen of that city not only held a very impressive service in his memory, but have also issued enlarged photos of the young man, one of which has been presented to his mother while the other has been hung in the Council Chambers.

Among the letters forwarded to his mother from the field of battle was one from Capt. A. J. Roper of Lithgow, who stated that Sergt. Woods and two other members of the band received the full force of a shell explosion. “Sonny" , as he was known to his Queensland intimates, was killed instantly and did not suffer the agony that some did. He did his duty nobly and would be much missed by all.

At the band memorial there was a big crowd present and the service was said to be very solemn and impressive. His late bandmaster, by whom he was also previously employed, has published a poem to his memory, one verse of which reads:
​
“Nor flinching, in the fighting, He at the front did fall;
Attending to the dying, He gave his life — his all.”

This is true of many a noble stretcher-bearer.  Sergt. Woods died a noble death, and it is a consolation to his mother that his end was worthy of the son she loved. He was one of the many who have given their all, their life that we might live away from the shadow of Prussian oppression and the devilish ‘kultur’  of the Hun.”

Winner of the North Queensland Championships, Cairns Contest, 1911
“Sonny’s Cornet which his mother prized more than all else”
With many thanks to the Charters Towers Archives for supplying the above photo.

In a line of 17 graves – of young soldiers all killed on the same day 5th May 1916 -  Sonny Wood’s grave is the first.   His, and the next two graves are placed  very close together – as if “glued”.  The soldier next to Sonny is Jack McNeil, another Bandsman Ambulance Bearer.  Although the article in the Lithgow Mercury says that three members of the Band were killed by that one shell,  I think it is more likely that the third soldier, James Summerson, was a patient they were carrying


With thanks to Nicolas Devin of Armentieres, who recently visited these graves on my behalf, and sent the information and photograph.

​All The above provided by Shirley Powley 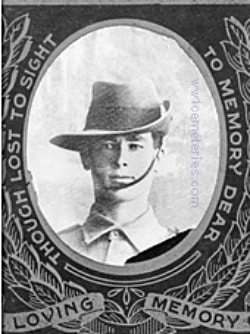 He was educated at Public School and was a native of the Yass district where he worked as a farmer and labourer before enlisting at Cumnock on 26 July 1915. Pte Merriman was assigned to the 20th Battalion and later saw service with that unit on the Western Front in France. In May 1916, the 20th Battalion was in action at Armentieres and it was in this action that Merriman was killed on 5 May 1916. 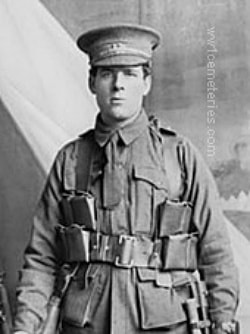 A labourer from Ballarat, Vic prior to enlistment, Pte Pring embarked with the 11th Reinforcements from Melbourne on HMAT Nestor on11 October 1915. On 29 June 1916 he died, aged 23, from wounds received in action at Armentieres. 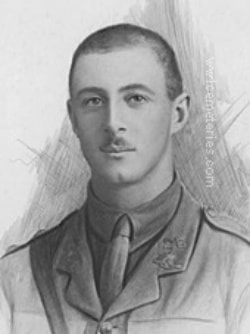 A grazier from Bondi, NSW prior to enlistment, Lt Pye embarked with A Company from Sydney on HMAT Themistocles (A32) on 12 April 1915. He was wounded in action at Gallipoli and evacuated to England, later rejoining his battalion. He was killed accidentally by his own men. Lt. Pye had been scouting the German wire at night, having left his men to do so. On his return he was challenged and either did not reply or did not hear the challenge. Thinking he was a German, his men opened fire and he was shot a number of times through the chest and head. 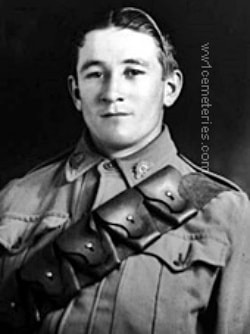 A 22 year old brass finisher prior to enlisting on 22 July 1915, he embarked for overseas with the 8th Reinforcements from Melbourne on 5 January 1916 aboard HMAT Afric. On arrival in Egypt, he transferred to the 8th Battalion and then to the 14th Battalion and embarked with the latter to the Western Front. He was killed in action near Armentieres, France. His brother, 4789 Private Joseph Shaw served with the 21st Battalion on the Western Front and returned to Australia in April 1918. 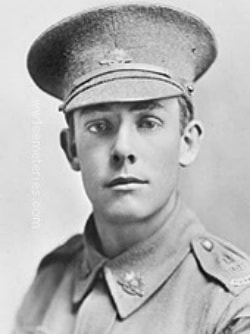 An 18 year old porter prior to enlisting on 16 July 1915, he embarked for overseas with the 10th Reinforcements of the 1st Battalion from Sydney on 8 October 1915 aboard HMAT Warilda. After joining the 1st Battalion in Egypt on 6 January 1916, he transferred to the 13th Battalion on 9 March 1916 and held the rank of Corporal for three months. He deployed with the 13th Battalion to the Western Front, arriving in France on 8 June 1916. Three weeks later, on 29 June 1916 he was killed in action at Erquinghem, France. 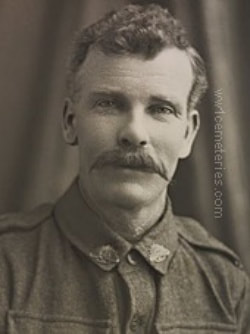 He worked as a barman prior to enlisting (under the name Patrick Augustus Wall) in July 1915. Pte. Wall embarked from Sydney with the 6th Reinforcements on board HMAT Euripides (A14) on 2 November 1915. On 27 April 1916, Pte. Wall died at Bois Grenier, Armentieres, France, of wounds received in action. ​