This cemetery stands behind a farm-house that was called "Bus House" by the troops during the First World War. It was made in June-November 1917, but one grave of January 1915 was brought in during the war, and four more were added in April 1918.

The British Expeditionary Force was involved in the later stages of the defence of Belgium following the German invasion in May 1940, and suffered many casualties in covering the withdrawal to Dunkirk. A number were killed during the battle on the Ypres-Comines canal and were originally buried where they died, but in 1941 their graves were brought in from sites scattered throughout the commune for reburial in this cemetery. 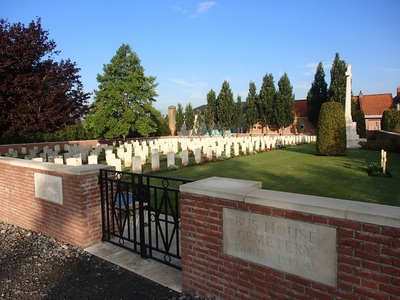 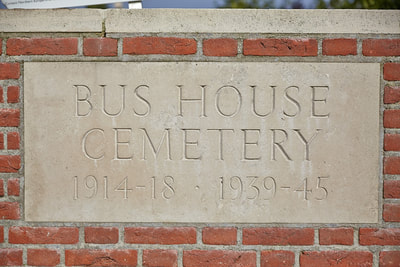 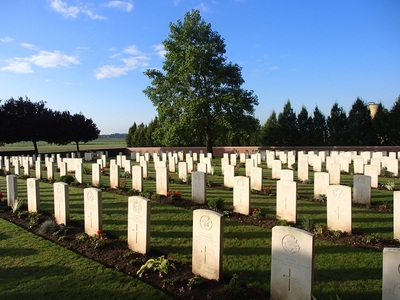 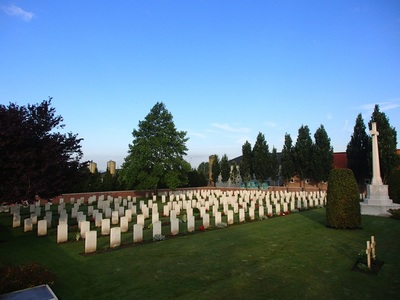 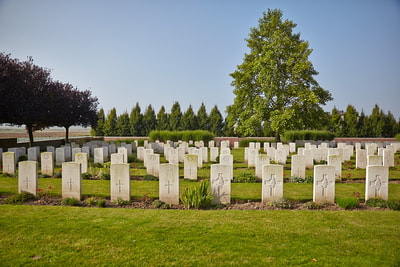 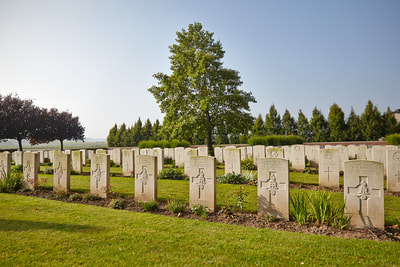 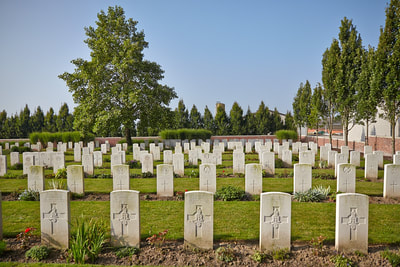 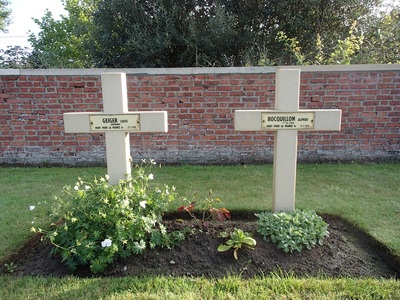 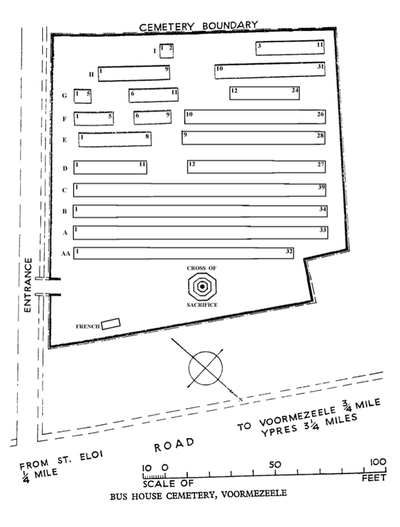 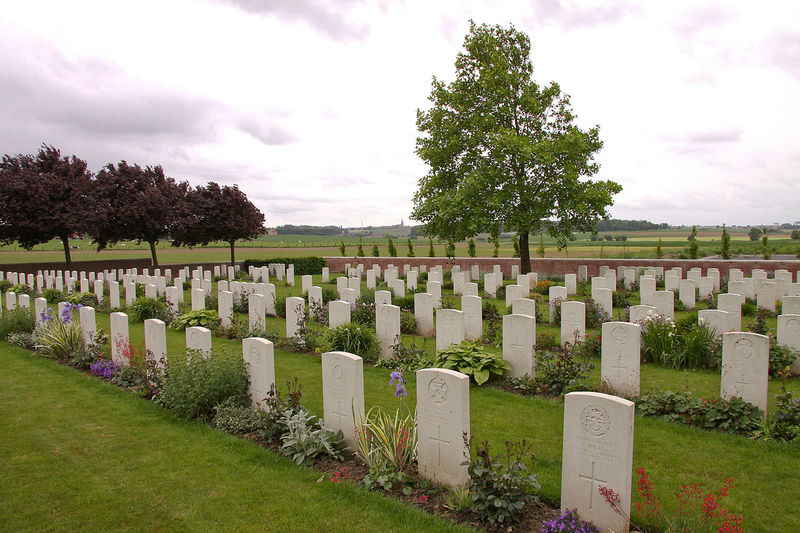 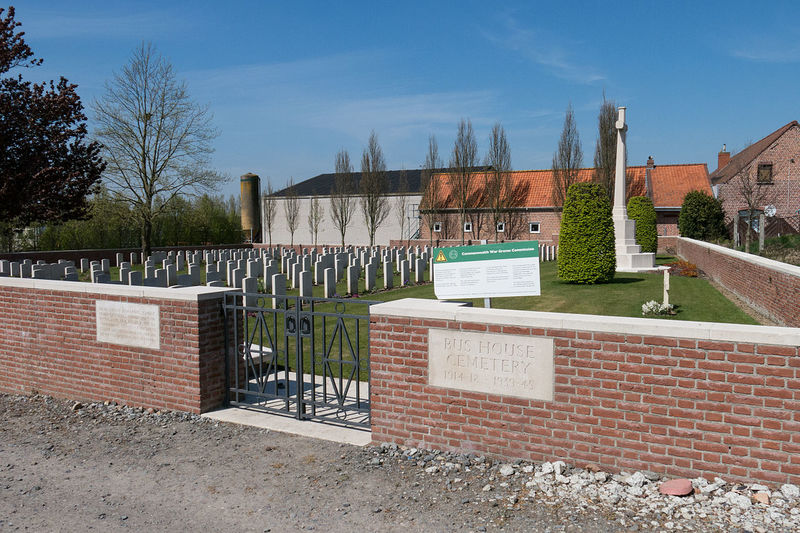 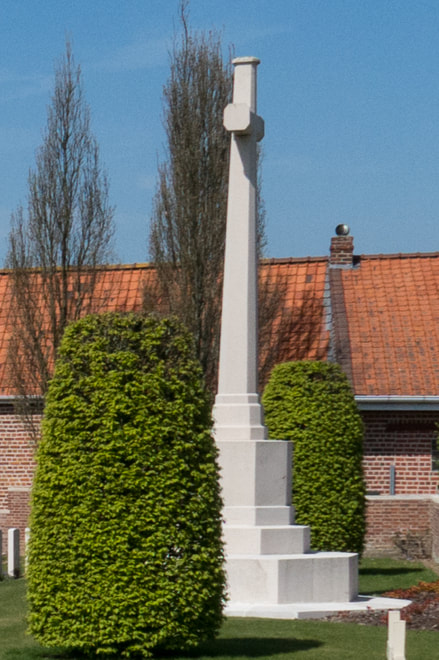 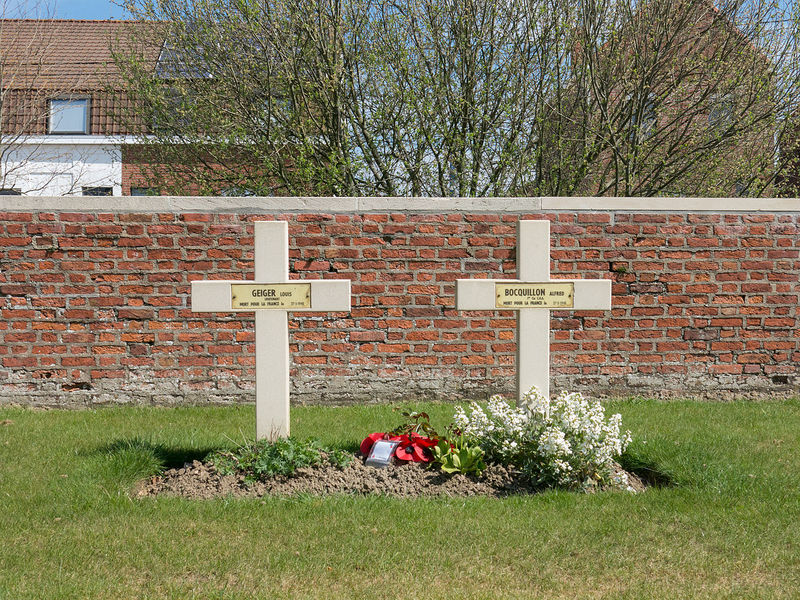 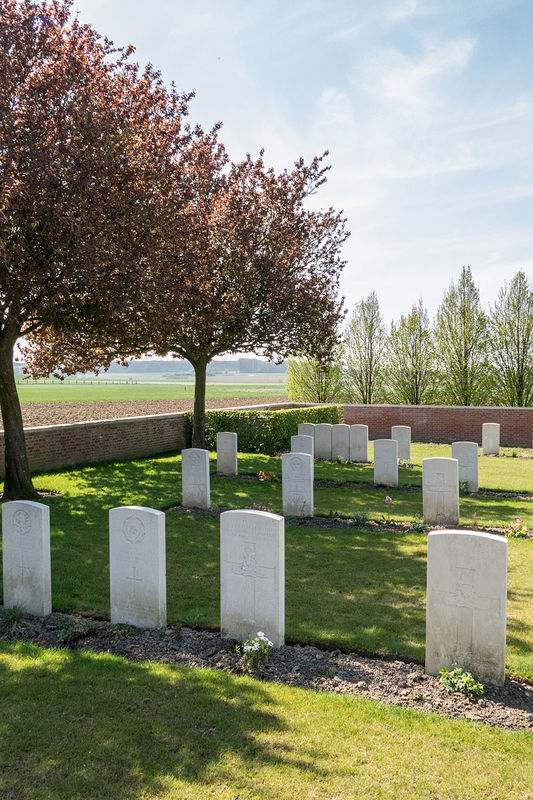 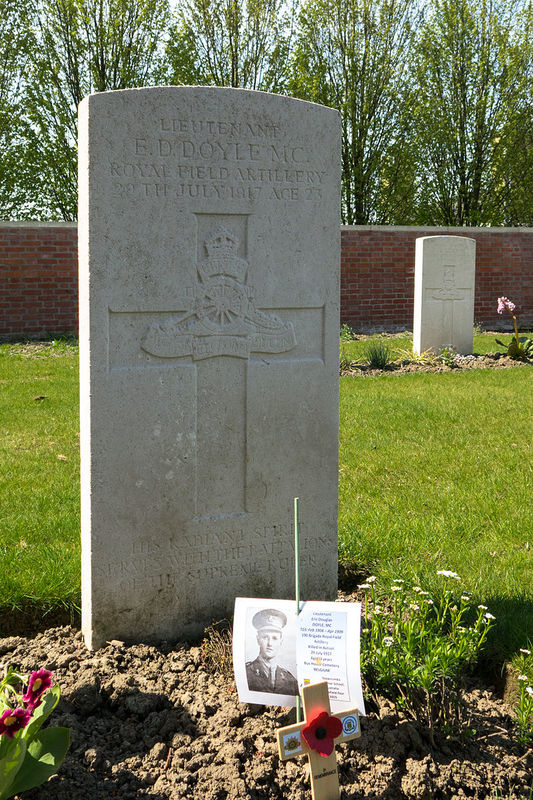 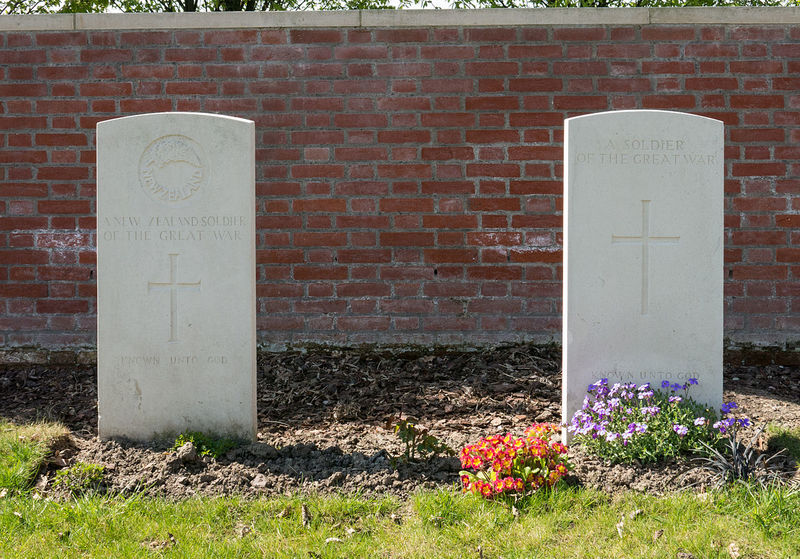 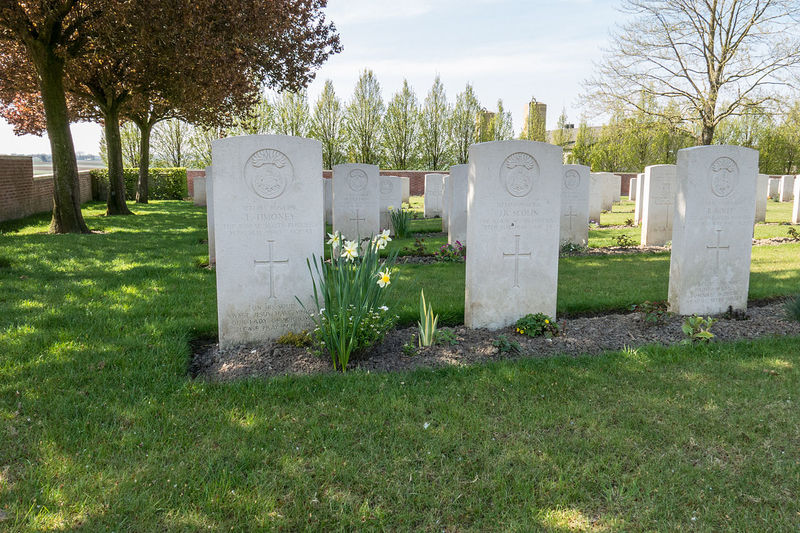 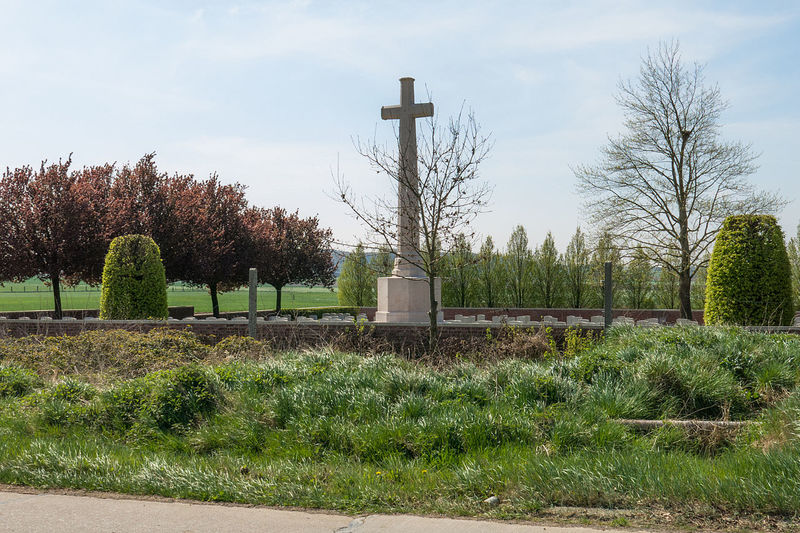 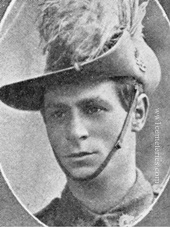 ​5th Light Horse Regiment (later 11th Brigade, Australian Field Artillery), of Nerang, Qld. A farmer prior to enlisting on 5 May 1915, he embarked from Sydney, NSW, aboard HMAT Mashobra on 4 October 1915. He was killed in action near Voormezeele, Belgium, on 22 July 1917, aged 20. 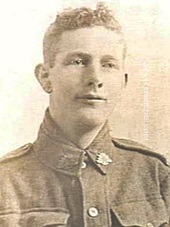 ​A 21 year old labourer prior to enlisting on 27 January 1915, he embarked for overseas with the 4th Reinforcements of the 15th Battalion from Brisbane on 8 April 1915 aboard HMAT Star of England. He was wounded in action at Gallipoli and recovered to see active service in Egypt and then on the Western Front. Gunner Carmody was killed in action at Spoil Bank near Ypres, Belgium on 22 July 1917 and is buried in the Bus House Cemetery, Voormezeele, Belgium. 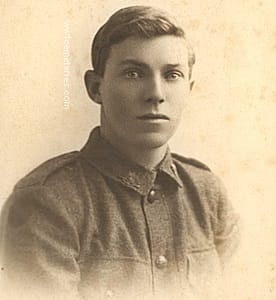 A farmer from Merredin, WA enlisted in the 10th LHR at Blackboy Hill, near Perth, WA. Under-age at 19, he requested his parents' permission which was given by telegram: "Dear Norman Father Mother give consent to enlist we commit you into God's care". He saw service with the 3rd LHR in Egypt before transfering to the 24th Howitzer Brigade, and later the 11th Field Artillery Brigade as a driver. In May 1917 he was re-mustered as a sapper with the 4th Division Signal Company, Australian Engineers. He was killed in action in Belgium, 31 July 1917. 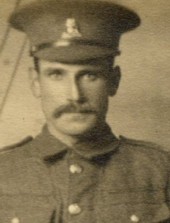 Son of Alfred and Angelina Doe; husband of Edith Doe, of The Post Office, Marchwood, Southampton. 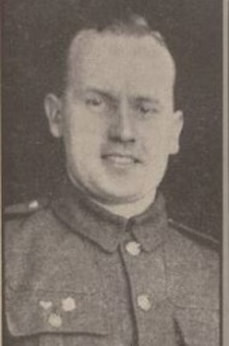 Son of James and Margaret Reid; husband of Anne Reid, of Halifax, Yorkshire. 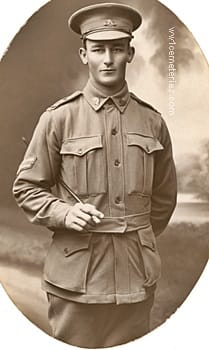 Son of Herbert and Harriett Williams, of Rockhampton, Queensland.

A clerk from Rockhampton, Queensland, before enlisting on 5 May 1915. He embarked at Brisbane aboard HMAT Shropshire (A9) on 20 August 1915 and joined the 15th Battalion at Lemnos on 23 October 1915. After the withdrawal from Gallipoli, Gnr Williams fought in France and Belgium. He joined the 42nd Battery, 11th Field Artillery Brigade on 18 March 1916. Gnr Williams was killed in action at Belgium on 3 August 1917.