On a terrace within the cemetery will also be found the Cambrai Memorial.

The chateau at Louverval, was taken by the 56th Australian Infantry Battalion at dawn on 2 April 1917. The hamlet stayed in Allied hands until the 51st (Highland) Division was driven from it on 21 March 1918 during the great German advance, and it was retaken in the following September.

Parts of Rows B and C of the Military Cemetery were made between April and December 1917. In 1927, graves were brought in from the following cemeteries:-

LOUVERVAL CHATEAU CEMETERY, which was in a meadow near the Southern angle of the Chateau grounds. It was begun by German troops in March 1918, and used by British in September and October 1918. After the Armistice, a further nine British graves were brought in. It contained the graves of 78 soldiers, sailors and Marines from the United Kingdom, one Australian soldier and one New Zealand, and 23 German soldiers.

LOUVERVAL GERMAN CEMETERY was at the Eastern angle of the Chateau grounds; it contained the graves of 138 German soldiers and seven unidentified Highlanders.

On a terrace at one end of the cemetery stands the CAMBRAI MEMORIAL which commemorates more than 7,000 servicemen of the United Kingdom and South Africa who died in the Battle of Cambrai in November and December 1917 and whose graves are not known.

Sir Douglas Haig described the object of the Cambrai operations as the gaining of a 'local success by a sudden attack at a point where the enemy did not expect it' and to some extent they succeeded. The proposed method of assault was new, with no preliminary artillery bombardment. Instead, tanks would be used to break through the German wire, with the infantry following under the cover of smoke barrages.

The attack began early in the morning of 20 November 1917 and initial advances were remarkable. However, by 22 November, a halt was called for rest and reorganisation, allowing the Germans to reinforce. From 23 to 28 November, the fighting was concentrated almost entirely around Bourlon Wood and by 29 November, it was clear that the Germans were ready for a major counter attack. During the fierce fighting of the next five days, much of the ground gained in the initial days of the attack was lost.

For the Allies, the results of the battle were ultimately disappointing but valuable lessons were learnt about new strategies and tactical approaches to fighting. The Germans had also discovered that their fixed lines of defence, no matter how well prepared, were vulnerable.

The Cambrai Memorial was designed by H Chalton Bradshaw with sculpture by C S Jagger.

His last letter to his parents dated Nov 21st 1917 ended with this verse:
God holds the key to all unknown
And I am glad;
If other hands should hold the key,
Or if he trusted it to me
I might be sad. 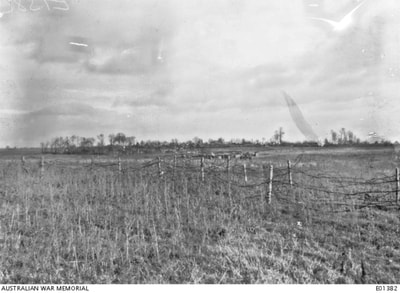 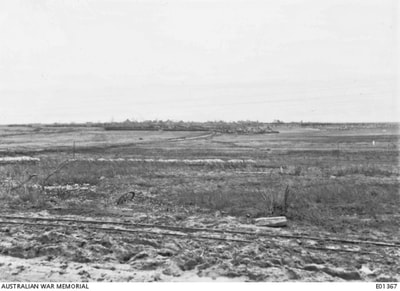 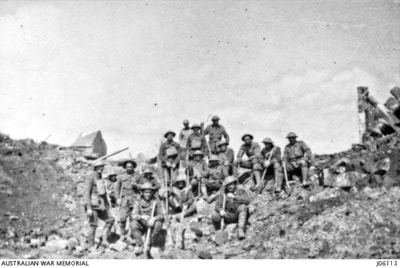 Citation: An extract from the "London Gazette," dated 8th Jan., 1918, records the following:- "For most conspicuous bravery and devotion to duty when, acting as a stretcher-bearer during a most intense and continuous enemy bombardment, Pte. Clare dressed and conducted wounded over the open to the dressing-station about 500 yards away. At one period when all the garrison of a detached post, which was lying out in the open about 1 50 yards to the left of the line occupied, had become casualties, he crossed the intervening space, which was continually swept by heavy rifle and machine-gun fire, and, having dressed all the cases, manned the post single-handed till a relief could be sent. Pte. Clare then carried a seriously wounded man through intense fire to cover, and later succeeded in getting him to the dressing station. At the dressing-station he was told that the enemy was using gas shells to a large extent in the valley below, and as the wind was blowing the gas towards the line of trenches and shell-holes occupied, he started on the right of the line and personally warned every company post of the danger, the whole time under shell and rifle fire. This very gallant soldier was subsequently killed by a shell."

Citation: An extract from "The London Gazette," dated 23rd Nov., 1917, records the following:-"For most conspicuous bravery and devotion to duty in attack. After the first objective had been captured and consolidation had been started, work was considerably hampered, and numerous casualties were caused, by an enemy machine gun firing from a concrete emplacement situated on the edge of our protective barrage. Pte. Dancox was one of a party of about ten men detailed as moppers-up. Owing to the position of the machine gun emplacement, it was extremely difficult to work round a flank. However, this man with great gallantry worked his way round through the barrage and entered the" Pillbox "from the rear, threatening the garrison with a Mills bomb. Shortly afterwards he reappeared with a machine gun under his arm, followed by about 40 enemy. The machine gun was brought back to our position by Pte. Dancox, and he kept it in action all day. By his resolution, absolute disregard of danger and cheerful disposition, the morale of his comrades was maintained at a very high standard under extremely trying circumstances."

Citation: An extract from "The London Gazette," dated 12th Feb., 1918, records the following:-"For repeated acts of most conspicuous bravery. He led his company in an attack and cleared 400 yards of trench. Though wounded, when the enemy attacked in superior numbers, he sprang out of the trench with eight men and met the attack in the open, killing many and taking six prisoners. For three hours after this, all other Officers having become casualties, he remained with his company, refusing to go to the dressing station, and repeatedly repelled bombing attacks. Later, when the enemy again attacked in superior numbers, he led his men to repel the attack and was mortally wounded. His heroism, when worn out and exhausted from loss of blood, inspired his men to hold out, though almost surrounded, till reinforcements arrived and dislodged the enemy.

Citation: An extract from "The London Gazette," dated 16th Nov., 1915, records the following:-"For most conspicuous bravery and devotion to duty in the attack on Hill 70 on 25th Sept., 1915. Second Lieutenant Johnson was with a section of his company of the Royal Engineers. Although wounded in the leg, he stuck to his duty throughout the attack, led several charges on the German redoubt, and at a very critical time, under very heavy fire, repeatedly rallied the men who were near him. By his splendid example and cool courage he was mainly instrumental in saving the situation and in establishing firmly his part of the position which had been taken. He remained at his post until relieved in the evening."

Citation: An extract from "The London Gazette," dated 12th March, 1918, records the following:- "For most conspicuous bravery and brilliant leadership. When the enemy penetrated some distance into our position and the situation was extremely critical, Capt. McReady-Diarmid at once led his company forward through a heavy barrage. He immediately engaged the enemy, with such success that he drove them back at least 300 yards, causing numerous casualties and capturing 27 prisoners. The following day the enemy again attacked and drove back another company which had lost all it's officers. This gallant officer at once called for volunteers and attacked. He drove them back again for 300 yards, with heavy casualties. Throughout this attack Capt. McReady-Diarmid led the way himself, and it was absolutely and entirely due to his marvellous throwing of bombs that the ground was regained. His absolute disregard for danger, his cheerfulness and coolness at a most trying time, inspired all who saw him. This most gallant officer was eventually killed by a bomb when the enemy had been driven right back to their original starting point."

Citation: An extract from "The London Gazette," dated 12th Feb., 1918, records the following:-"For most conspicuous bravery when in command of a company in an isolated position 1,000 yards in front of the main line, and overlooking the enemy's position. He observed the enemy massing for an attack, and afforded invaluable information to battalion headquarters. He was ordered to withdraw his company, leaving a rearguard to cover the withdrawal. The attack developing with unexpected speed, Capt. Stone sent three platoons back and remained with the rearguard himself. He stood on the parapet with the telephone under a tremendous bombardment, observing the enemy and continued to send back valuable information until the wire was cut by his orders. The rearguard was eventually surrounded and cut to pieces, and Capt. Stone was seen fighting to the last till he was shot through the head. The extraordinary coolness of this heroic officer and the accuracy of his information enabled dispositions to be made just in time to save the line and avert disaster."

Son of Florence E. Wain, of "Woodside," The Avenue, Llandaff, Cardiff, and the late Harris Wain.

Citation: An extract from "The London Gazette," dated 13th Feb., 1918, records the following:- "For most conspicuous bravery in command of a section of Tanks. During an attack the Tank in which he was, was disabled by a direct hit near an enemy strong point which was holding up the attack. Capt. Wain and one man, both seriously wounded, were the only survivors. Though bleeding profusely from his wounds, he refused the attention of stretcher-bearers, rushed from behind the Tank with a Lewis gun, and captured the strong point, taking about half the garrison prisoners. Although his wounds were very serious he picked up a rifle and continued to fire at the retiring enemy until he received a fatal wound in the head. It was due to the valour displayed by Capt. Wain that the infantry were able to advance." 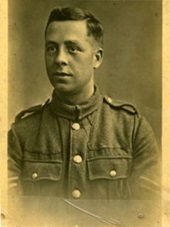 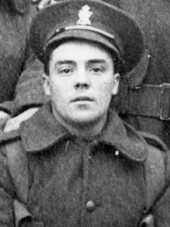 Son of Samuel and Rachel Bryans, of 150, Cambrai St., Belfast.

One of 5 brothers who fought in the war, two were killed; Henry and Frederick,  1 was badly wounded and the other two came through physically unharmed.

Picture courtesy of Robert Bryans, Great Nephew of this soldier 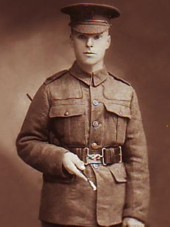 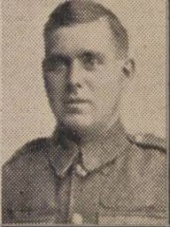 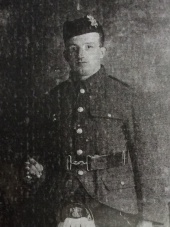 Son of Mrs. Isabella Knox Hamilton, of 6, Woodside Cottage, Bishopbriggs, Glasgow. He was the middle child of three from the marriage of Thomas and Isabella Patrick. 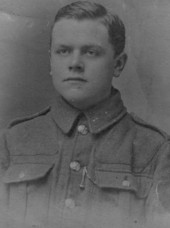 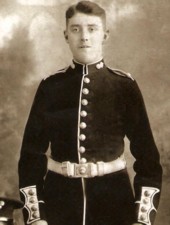 21623 Guardsman
James Yapp
3rd Bn. Grenadier Guards
27th November 1917, aged 22.
Panel 2.
​
Son of James & Sarah Yapp of 44 Stable Row, Lightmoor, Dawley, Shropshire and had enlisted into the KSLI Territorials (4th Bn.) in June 1913 aged 17 years 10 months and had been discharged as unfit for duty in Oct 1914 only to immediately re-enlist into the Guards.

1919: View of the Hindenburg Line and outpost villages in the vicinity of Bullecourt, taken from near Louverval. An unidentified village, possibly Bullecourt, is partly visible in the background (left).