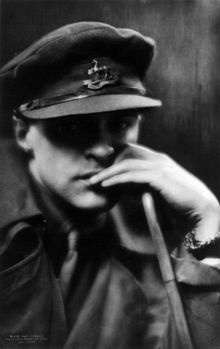 Captain (Charles) Bruce Bairnsfather was a prominent British humorist and cartoonist. His best-known cartoon character is Old Bill. Bill and his pals Bert and Alf featured in Bairnsfather's weekly "Fragments from France" cartoons published weekly in "The Bystander" magazine during the First World War.

Born to a military family in Murree, British India (now Pakistan), he spent his early life in India, but was brought to England in 1895 to be educated at the United Services College, Westward Ho!, then at Stratford-upon-Avon. Initially intending a military career, he failed entrance exams to Sandhurst and Woolwich Military Academies but joined the Cheshire Regiment.

He resigned in 1907 to become an artist, studying at the John Hassall School of Art. Unsuccessful at first, he worked as an electrical engineer. Working in this capacity for the Old Memorial Theatre, Stratford, brought him into acquaintance with Marie Corelli, who introduced him to Thomas Lipton, a connection that led to commissions to draw advertising sketches for Lipton tea, Player's cigarettes, Keen's Mustard, and Beecham's Pills.

In 1914 he joined the Royal Warwickshire Regiment and served with a machine gun unit in France until 1915, when he was hospitalised with shellshock and hearing damage sustained during the Second Battle of Ypres. Posted to the 34th Division headquarters on Salisbury Plain, he developed his humorous series for the Bystander about life in the trenches, featuring "Old Bill", a curmudgeonly soldier with trademark walrus moustache and balaclava. The best remembered of these shows Bill with another trooper in a muddy shell hole with shells whizzing all around. The other trooper is grumbling and Bill advises: Well, If you knows of a better 'ole, go to it.

Many of his cartoons from this period were collected in Fragments From France (1914) and the autobiographical Bullets & Billets (1916).

Despite the immense popularity with the troops and massive sales increase for the Bystander, initially there were objections to the "vulgar caricature". Nevertheless, their success in raising morale led to Bairnsfather's promotion and receipt of a War Office appointment to draw similar cartoons for other Allies forces.
In 1921 Bairnsfather married Cecilia Agnes Scott.

"Old Bill" and Bairnsfather himself continued in popularity between the World Wars. Many police officers of the time had similar facial hair, and that may have led to British police being referred to as "The Bill". Bairnsfather was the subject of one of the first British sound films in 1927, wrote and directed the 1928 Canadian film Carry On Sergeant, and took part in the early Alexandra Palace television transmissions in 1936. Old Bill appeared in numerous books, plays, musicals and films. In 1939 he published an autobiography, "Wide Canvas".

In World War II, he continued Old Bill work, but was not asked to help with the British war effort. Instead, he became official cartoonist to the American forces in Europe, contributing to Stars and Stripes and Yank, whilst residing at Cresswell House in Clun, Shropshire. He also drew cartoons at American bases and nose art on aircraft. His works are considered to have influenced artists such as Bill Mauldin.

In later life, he had found himself typecast as the creator of Old Bill, and his Times obituary concluded of his career that he was "fortunate in possessing a talent ... which suited almost to the point of genius one particular moment and one particular set of circumstances; and he was unfortunate in that he was never able to adapt, at all happily, his talent to new times and new circumstances". He died in 1959 of complications of bladder cancer, in Worcester.
​
A commemorative blue plaque appears outside one of his old studios, 1 Sterling Street, Knightsbridge London. The blue plaque was initiated by Tonie and Valmai Holt who later wrote Bairnsfather's biography (In Search of the Better Ole - the Life, the Works and the Collectables of Bruce Bairnsfather) and also sponsored a memorial plaque to Bairnsfather on the cottage at St Yvon in Belgium at the edge of Plugstreet Wood where Bairnsfather drew his first 'trench' cartoons.