A truce stranger than any fiction

The devil is often said to be in the detail, but not in this story. On 24 December 1914, something extraordinary happened amid the hellish killing fields of the Western Front. German and Allied troops, mercilessly slaughtering each other just hours earlier, laid down their arms and embraced Christmas together. In one of the most poignant events in human history, sworn enemies dropped their weapons, clambered out of trenches and crossed the shell-blasted mud of no-man’s land to shake hands, sing carols and exchange gifts. The British brought Bully beef, rum and cigarettes to the party. In exchange, the Germans traded sausages, coffee and cognac. Then, famously, a football match was played.
To be precise, a small number of football matches were played, up and down the length of the 500-mile front line. Out of necessity, many deployed a rolled up sandbag or tin can as an emergency football. But here and there a genuine leather ball was produced and a more serious match attempted. The largest shell craters were hastily filled in, referees were picked and military helmets or caps were placed as goalposts. The most famous of these impromptu international football matches occurred at St Yvon in southern Belgium, around eight miles south of Ypres. Here, in the fields of the Walloon village of Ploegsteert - known to the Tommies as “Plugstreet” - Saxon troops played their British counterparts on the slender strip of soil dividing the two armies. The Germans had started it. The unofficial truce began on 24 December - the day they traditionally celebrated Christmas - when they began decorating the frosted parapets of their trenches with candles and Christmas trees. Carols followed, including a rendition of ‘Stille Nacht.’ The British responded from across no-man’s-land with ‘The First Noel.’ And so it continued until, when the British sang ‘O Come All Ye Faithful,’ they heard the Germans joining in with the Latin words. Finally, a German messenger raised a white flag and strode boldly across the lines to broker the Christmas ceasefire. 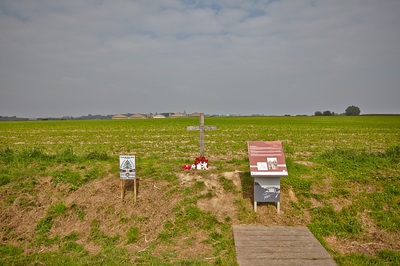 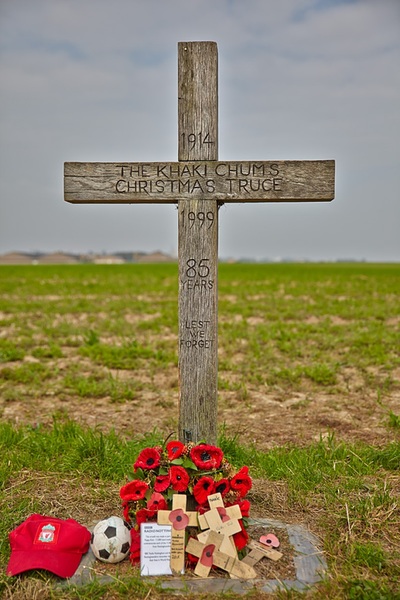 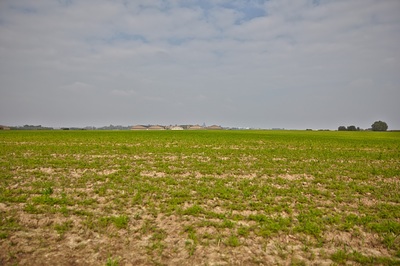 When it came to planning commemorative events for the centenary of war’s declaration in 2014, a re-enactment of this fabled Plugstreet football match was considered a ‘no brainer.’ Still at the planning stage, it will feature players, media representatives and serving soldiers from Britain, Belgium and Germany. The addition of kilts is yet to be confirmed.

The symbolic Christmas truce of 1914 wasn’t just about football, of course. The majority of the 100,000 British, French, Belgian and German soldiers who lowered their weapons and emerged from the trenches simply talked, told jokes and swapped keepsakes. Apart from the basic food, cigarettes and alcohol, these keepsakes also included buttons and belts from each other’s uniforms, Christmas puddings and Princess Mary Boxes: the small brass boxes sent to British soldiers in the run-up to Christmas containing pipes, lighters, cigarettes and bullet pencils. (The popular boxes had been the idea of the 17-year-old Princess Mary, the daughter of King George V and Queen Mary.) During the ceasefire, one British Tommy supposedly met his German barber from High Holborn and had an impromptu short-back-and-sides between the lines. Another German strutted about theatrically in a blouse, skirt and top hat taken from a nearby abandoned Belgian house, causing gales of laughter on both sides. Plenty of photographs were taken of the fraternisation between troops, with a British officer writing to his family that another truce had been fixed for New Year’s Day as “the Germans want to see how the photos come out.”

Although the Christmas Truce was utterly unofficial and went against direct orders from both armies’ high command, a number of the officer class inevitably succumbed to the festive spirit too. The commander of a guards battalion strode out to join a mixed group of British and German soldiers with the greeting: “Well my lads, a Merry Christmas to you! This is damned comic, isn’t it?” He then passed round a bottle of best rum which, one attendee noted, was “polished off before you could say knife.” For many, the truce was a surreal experience. “Just think,” Oswald Tilley of the London
Rifle Brigade wrote to his family, “while you were eating turkey, I was talking and shaking hands with the very men I had been trying to kill a few hours before. It was astounding!” There were more sombre scenes between the lines during the ceasefire too. On Christmas morning, a British chaplain performed a joint burial service in no-man’s-land for a number of fallen from both sides. The prayers and readings were recited first in English and then in German by a young divinity student. “It was an extraordinary and wonderful sight,” wrote one witness. “The Germans formed up on one side, the English on the other, the officers standing in front, every head bared.” In some places along the Western Front the truce lasted a number of days after Christmas, but in most the soldiers returned to their positions to recommence the bloodshed the following day - albeit with uniforms minus buttons, badges and belt buckles. Bizarrely, the details of the truce were not reported in the press for a week - an embargo finally broken by the New York Times on 31 December 1914. The British papers subsequently followed, printing numerous firsthand accounts and editorials on “one of the greatest surprises of a surprising war.” By 8 January, The Mirror had printed front page photographs of British and German troops mingling and singing in no-man’s-land. Despite the British Government’s official disapproval, the editorial tone was strongly positive across the board. The Times endorsed the “lack of malice” expressed by both sides, and The Mirror voiced regret that the “absurdity and tragedy” would have to begin again after such widespread demonstrations of fraternity. 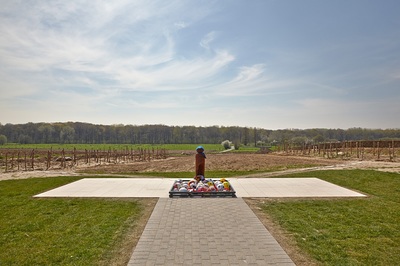 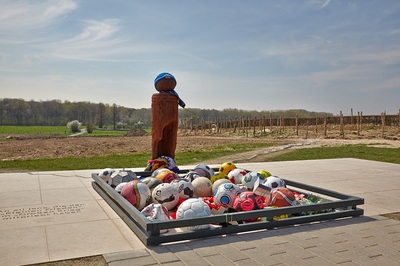 The Memorial by sculptor Andrew Edwards commemorates the 1914 Christmas Truce football event near the hamlet of St. Yvon, 3 kilometres south of Messines.

​The memorial is located near the tourist office in Messines. 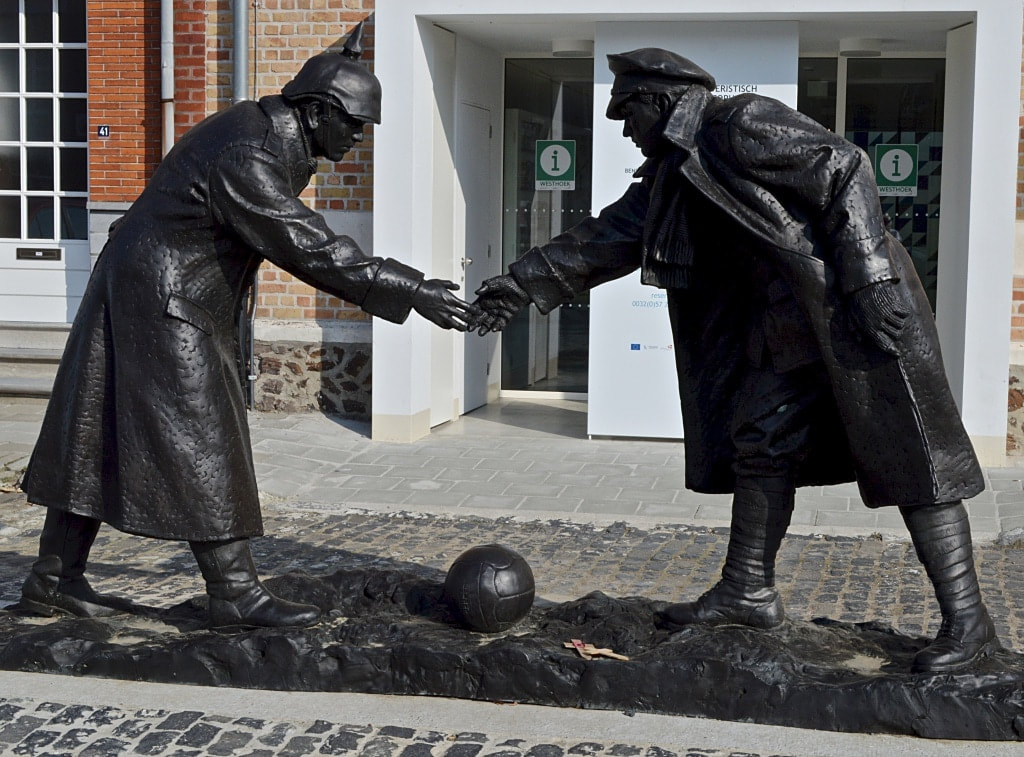 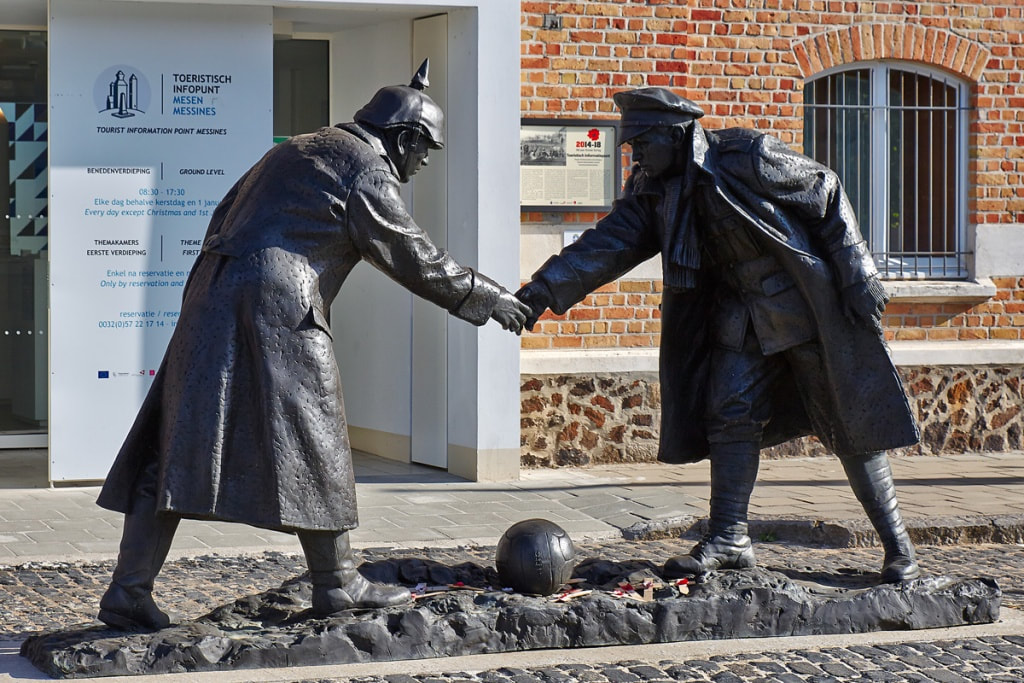 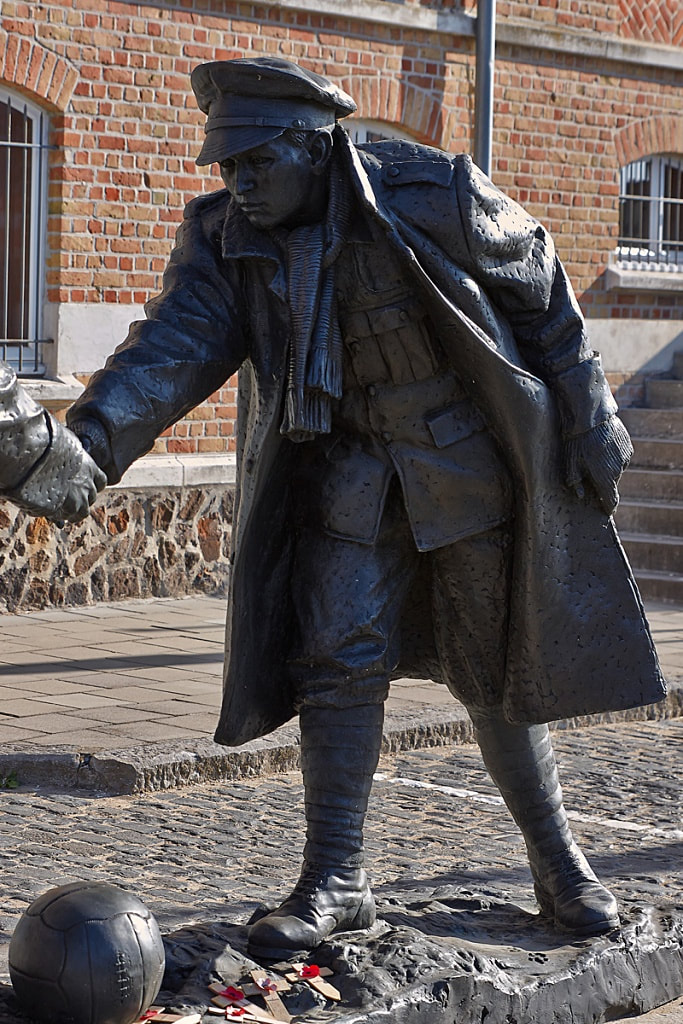 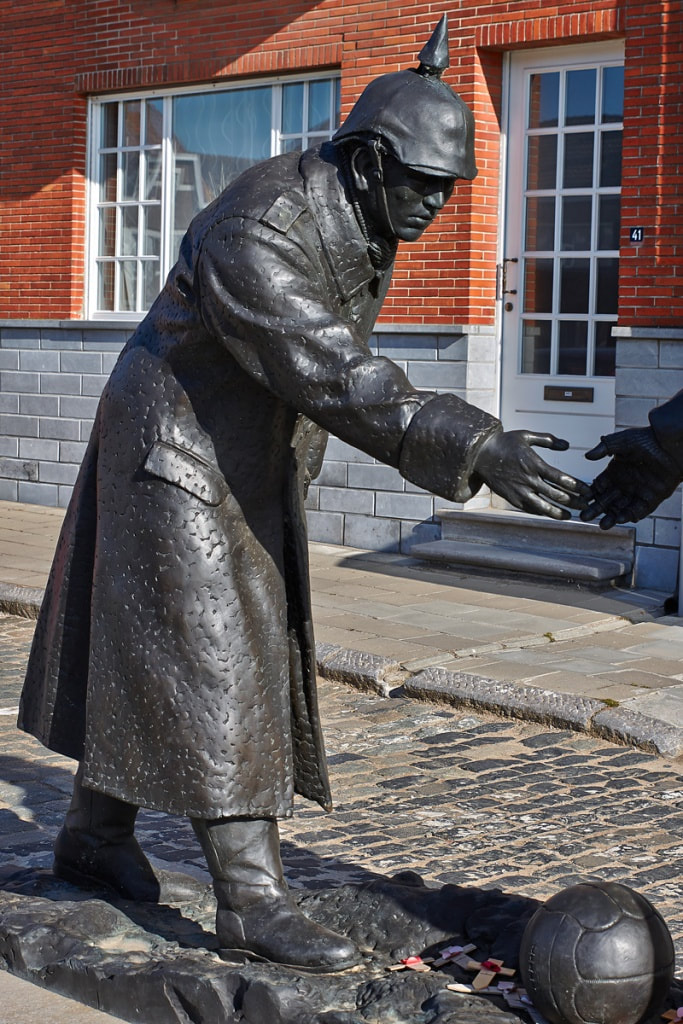 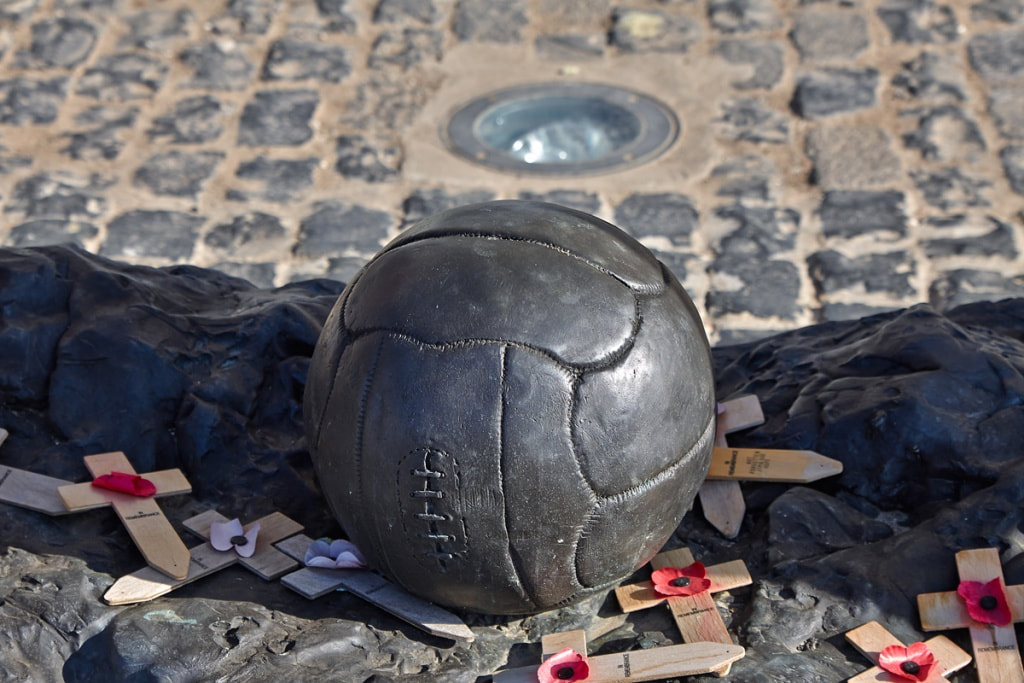 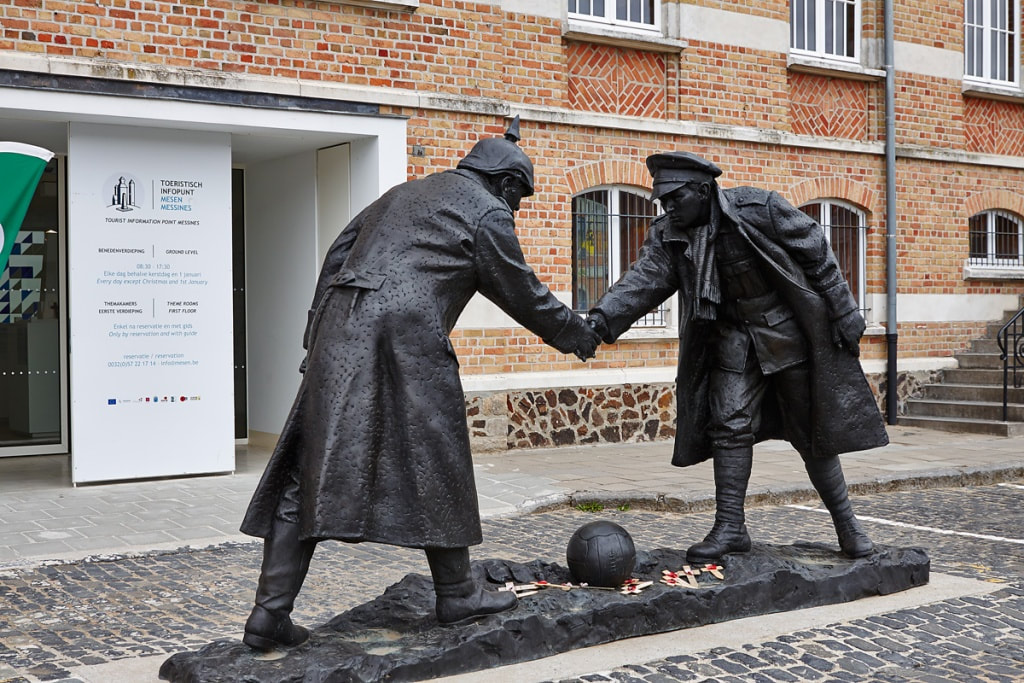 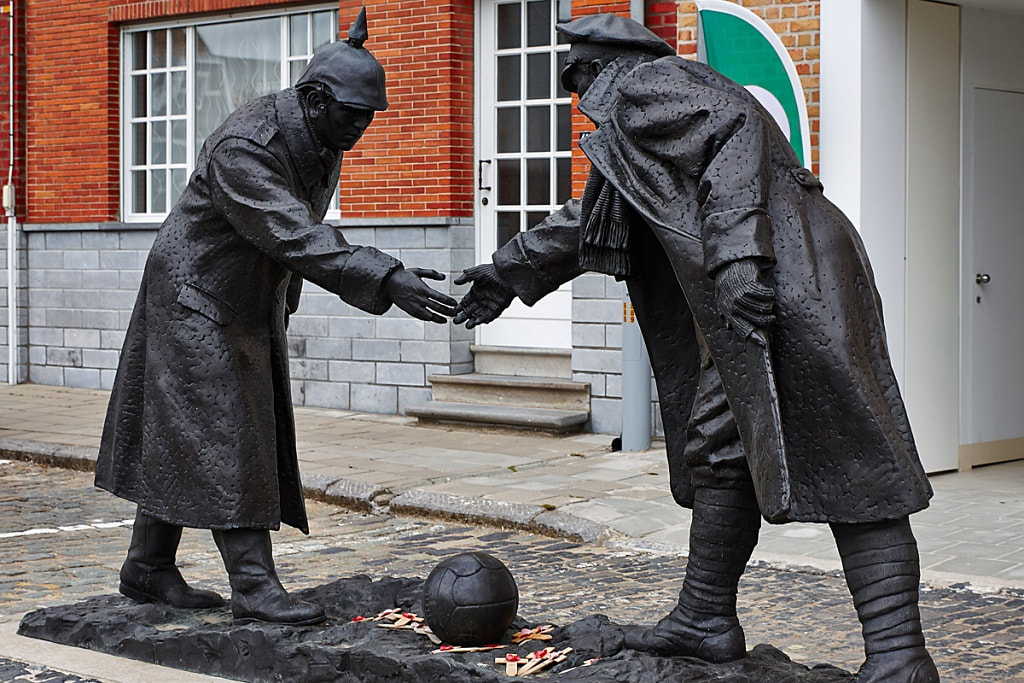 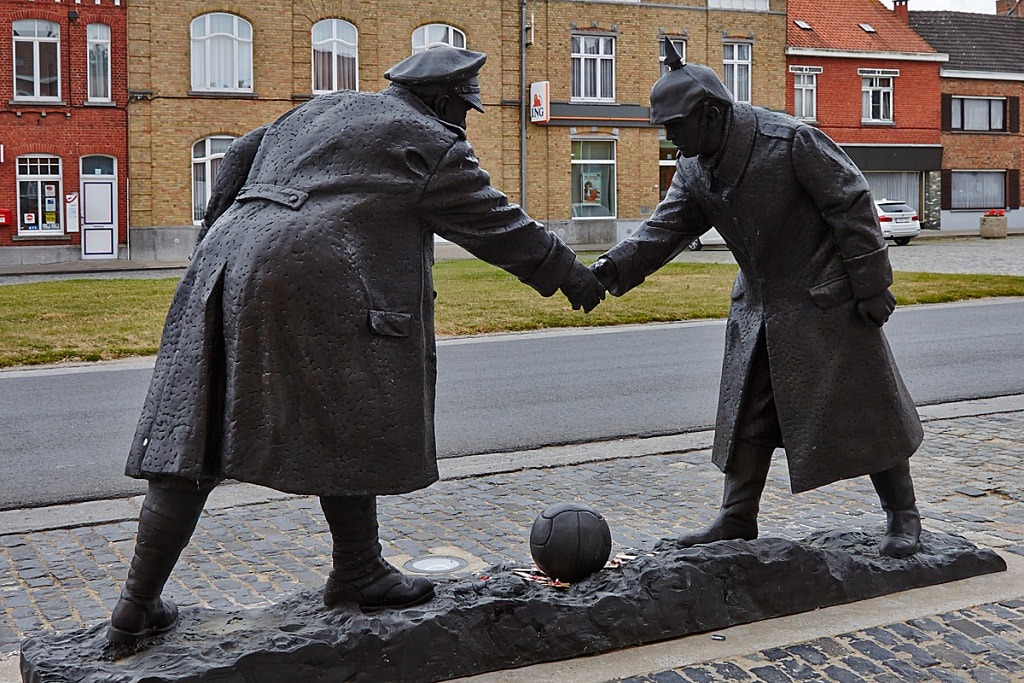 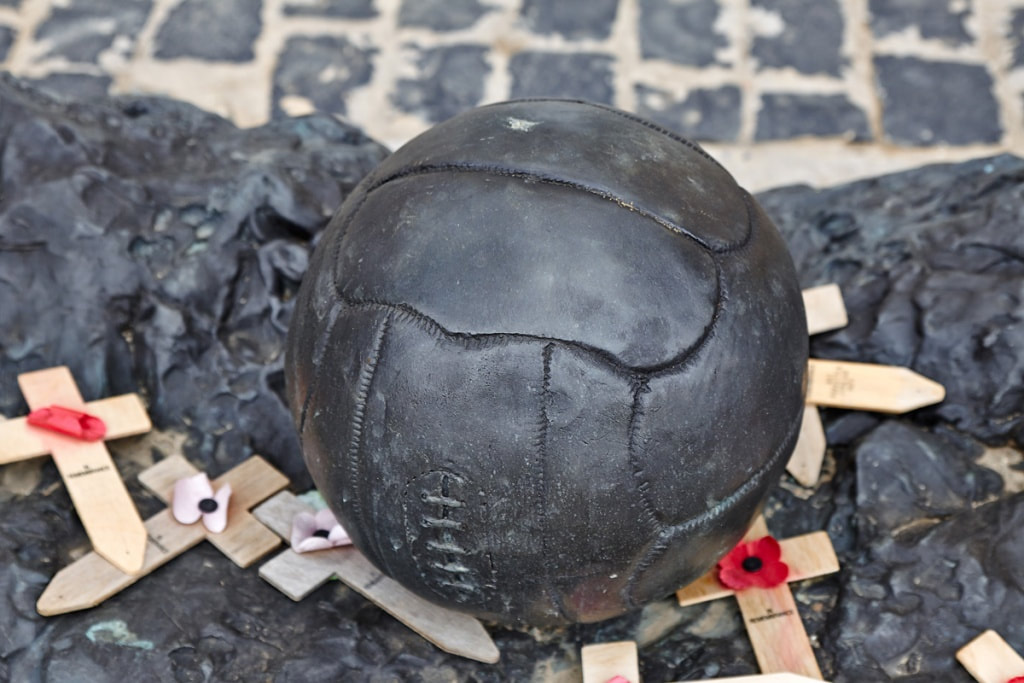 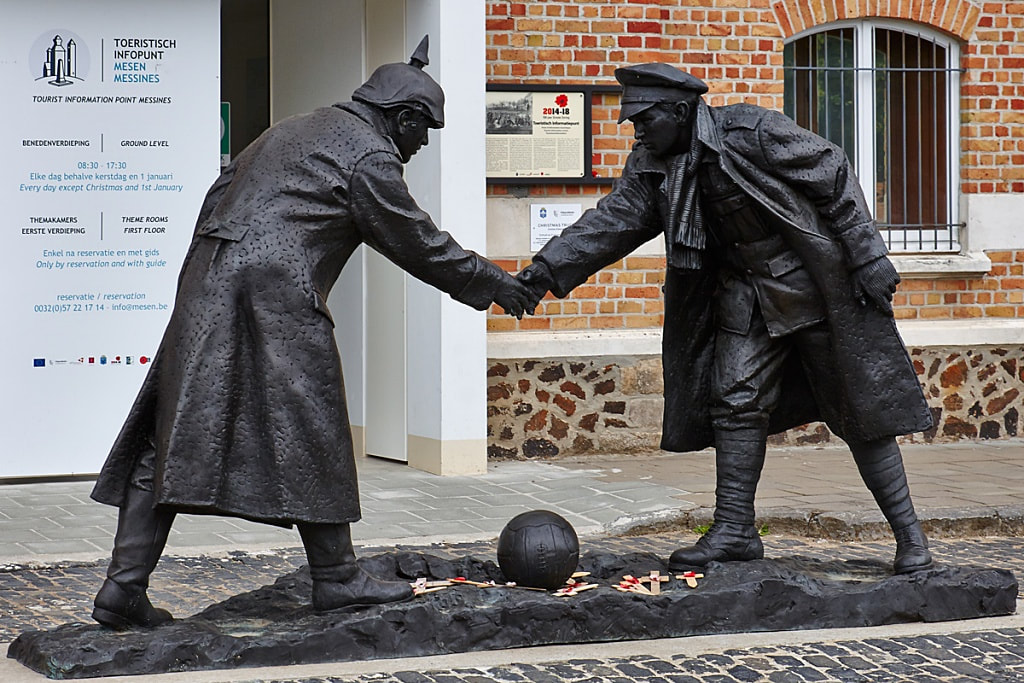