The ancient Roman military punishment of decimation, & other equally arbitrary variants are known (in detail) to have been inflicted on Italian soldiers on more than a few occasions in World War 1.

Decimation, as such, had no place of course in the Italian military penal code; however it permitted ‘summary justice’, bypassing courts martial but only in specified circumstances.  Acts of ‘cowardice’ or ‘revolt’ had to pose ‘grave and imminent danger’, & to be ‘flagrant’ in character. If called for, punishment had to be carried out on the spot, but even then had to be preceded by a ‘conscientious, albeit rapid assessment of responsibilities’.

On 19 May 1915, the first directive on discipline issued by the Italian C-in-C General Luigi Cadorna urged indestructible firmness on commanders, who were to apply ‘extreme measures of coercion & repression’. 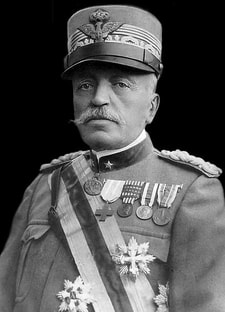 General Luigi Cadorna
In a  further directive in September, the implied threat of summary execution become explicit; & in the following months, Cadorna openly deplored the reluctance of courts martial to pass capital sentences.  The Justice Department at the Supreme Command laid down that proper courts martial should only be convened if they were sure to pass severe sentences.  Otherwise improvised tribunals in the field would suffice — where no military judge would be needed.

In June 1917, Cadorna informed the Italian Prime Minister that summary executions had been carried out ‘on a vast scale’ without regard to legal niceties.  He added that if indiscipline continued, he would be forced to resort to decimation — a step he had taken the previous November.  The Prime Minister seems to have accepted the situation — & the Justice Department had never apparently demurred.

Probably very few of the summary executions described below had fallen within the narrow exceptions mentioned above; these occasions will therefore  serve as samples only of a greater, perhaps never to be known number of executions.
(Prof Hew Strachan in his The First World War, published in 2003 gives a figure of 750)

​(In May 1915, decimation was inflicted on civilians by the Italian military, when a Captain rounded up farmers from the Caporetto/Tolmein area, who were accused of betraying Italian positions to the Austrians & sheltering Italian deserters.  Every tenth man in the line was ordered to step forward, & 6 were then shot)

On 26 May 1916, following the routing of an infantry regiment, several hundred soldiers failed to regroup.  Next day, the colonel commanding the regiment chose 12 men by lot & had them shot for desertion.  His name & the infliction of the punishment  was mentioned in the daily bulletin.

On 1 Nov 1916,  General the Duke of Aosta had 6 men summarily executed for mutiny — which led Cadorna to direct commanders to decimate mutinous units. 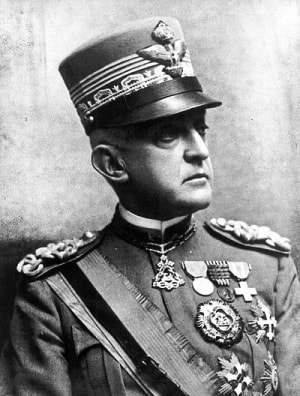 Duke of Aosta
In March 1917, a minor rebellion over a period of a few weeks in one battalion of the Ravenna Regiment, arising from the cancellation of leave, resulted in the execution of 29 men: some chosen by lot; some simply by order of the Divisional commander;  some after a mockery of a court martial hearing; & all carried out with the approval of the Corps commander.

By July 1917, the Catanzaro Brigade had fought on the Carso & on the Asiago plateau over a period of 2 years, taking heavy casualties: & many men had not been allowed a fortnight’s leave since the winter of 1915-16.  Following orders to return to the fray, elements in 2 regiments revolted, the consequent heavy-handed containment by HQ forces resulting in the death of 11 men, including 2 officers.
​
Next day, 28 men were charged with rebellion & executed on the spot: 12 had been chosen by lot from the company chiefly involved.  (Another 123 were sent for courts martial)

On 15 August 1917, in a trench above Caporetto, authority spotted a graffito written in insubordinate doggerel.  In the absence of an obvious culprit, the Corps commander ordered 4 men to be chosen by lot & shot.

In Sept 1917, a 5-man patrol returned having failed to bring back the expected Austrian prisoners.  Accusing its members of cowardice, the battalion commander ordered 2 to be shot at once.  Someone shot the Major; & in the end the Divisional commander had 14 men chosen by lot & executed.

On 2 November 1917, Cadorna made  (the brutal, & later enthusiastic Fascist) General Andrea Graziani responsible for restoring discipline among the troops retreating from Caporetto.  In the morning of 16 November, 19 men were shot in the back for sundry offences; another man was shot for saluting without taking his pipe out of his mouth, along with another 2 for hiding a couple of kilos of flour in their haversacks. 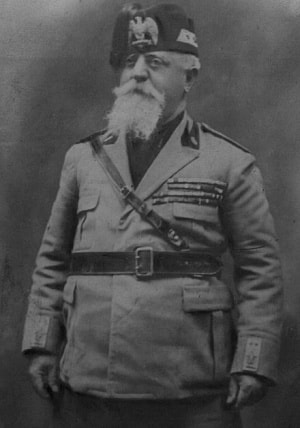 General Andrea Graziani
Cadorna was replaced later in the same month by General Armando Diaz, who acted to reform the conditions & treatment of his men — & abandoned decimation. 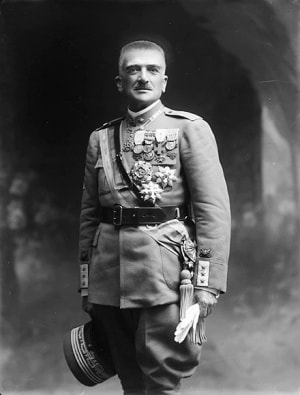