Location of the Tank Corps Memorial

In 1919 the Tank Corps applied for permission to put up a memorial on this site. The Corps put forward a design for this site comprising a granite obelisk on a plinth with four models of tanks. Having successfully been accepted by the British Battle Exploit Memorials Committee and the French authorities' “Decret d'hommage publique” the application proceeded with the purchase of the plot of land from Monsieur Thibaut for about 750 Francs. Representing King George VI, the Tank Corps Memorial was unveiled by Lieutenant- General Sir Thomas L. N. Morland in July 1922.

Inscription
Two bronze plaques on the memorial are inscribed with the battles on the Western Front in France which the tanks participated in from September 1916 to the Armistice in November 1918: “1916 — 1st SOMME — ANCRE ” and 1918 —2nd SOMME — RIVER LYS — HAMEL — MARNE — MOREUIL — AMIENS — BAPAUME — ARRAS — EPEHY — CAMBRAI — ST. QUENTIN — SELLE — MORMAL FOREST”

This place on the Somme battlefield was selected as the place for the memorial because it was near this location that tanks first went into action with the British Army as a new, surprise weapon against the German Army in the First World War. A few miles south of this memorial tanks were used at the Battle of Flers-Courcelette (15th - 22nd September 1916). In the night of 14th September a total of 36 tanks made their way to their allotted departure points for the launch of the British and French attack onto the German positions between Courcelette and Combles. Under a third of that number of tanks managed to make an impact on the German strongpoints, the others either breaking down, getting stuck or being knocked out. Although the battle resulted in high casualties for many of the British battalions taking part, and the majority of the tanks were not successful in reaching their objectives, there was a great moral boost reported by the British press with the capture of Flers combined with the played here by some of the tanks which did break through the
German lines. According to the British Official Military History “the scene in Flers was without precedent in war”  as tank D16 went forward into Flers village just before 8.20am. “Firing as it went, the tank lurched up the main street followed by parties of cheering infantry. Three other tanks (D6, D9 and D17) had begun to move along the eastern edge of the village, smashing into strongpoints and houses which contained machine guns, and spreading panic among the defenders who survived. Most of the Bavarians, however, had fled towards Gueudecourt, and although a few parties of desperate men held out for a time, all resistance was at an end by 10am.” An air report at 8.43am to III Corps reported: “Tank seen in main street Flers going on with large number of troops following it.” The successful capture of Flers village in this battle and the first co-operation of this new tank weapon with an infantry and artillery assault was indeed inexperienced and in its early stages, but it was a glimpse of things to come.

Boundary Fence
​
An interesting feature of the memorial is the boundary “fence” around the obelisk. In the application to build the memorial the fence was suggested as a way of keeping cattle away from the plinth of the memorial. The boundary fence consists of ten upright 6 pounder tank gun barrels with tank driving chains mounted across them. 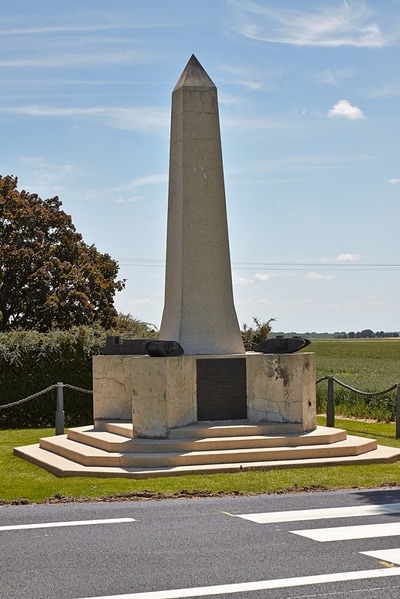 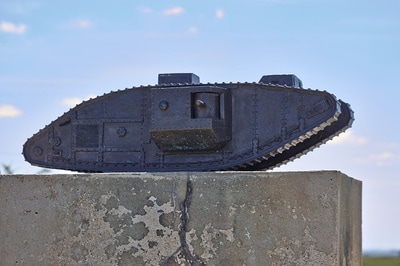 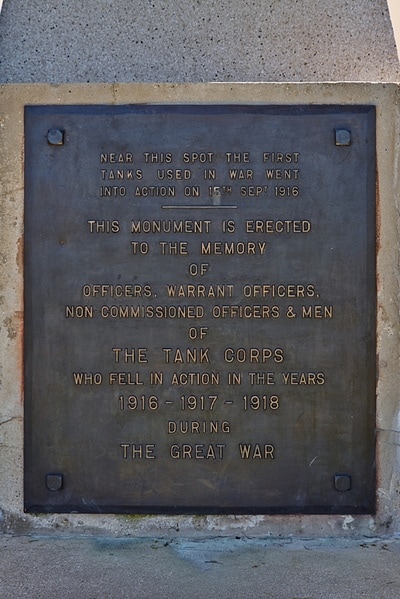 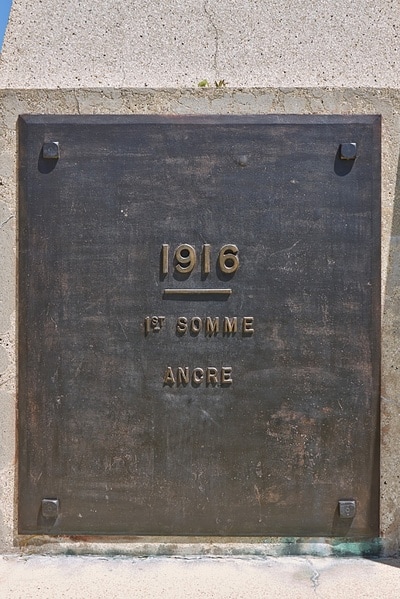 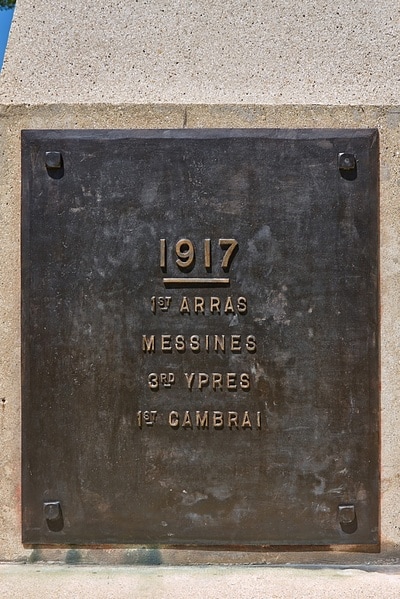 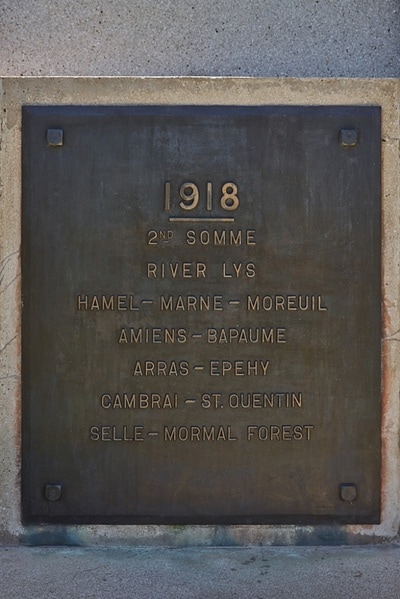 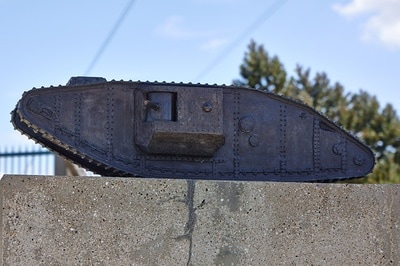 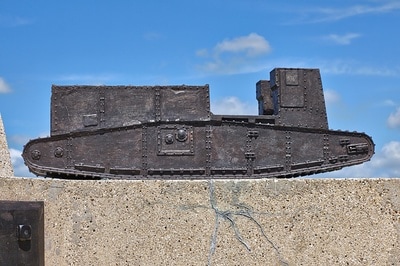 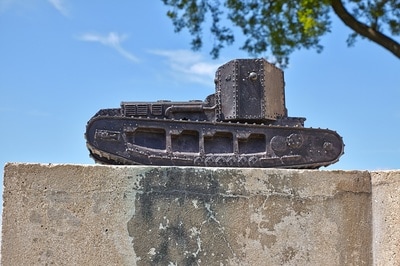 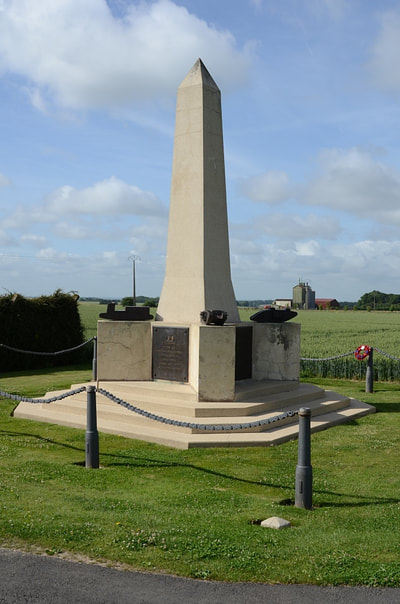 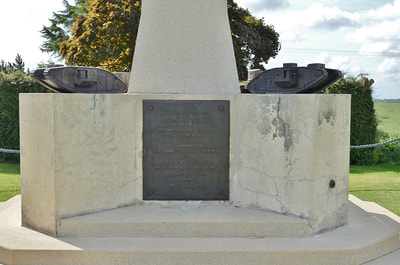 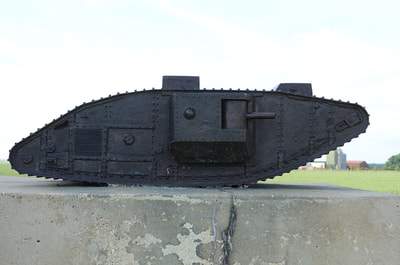 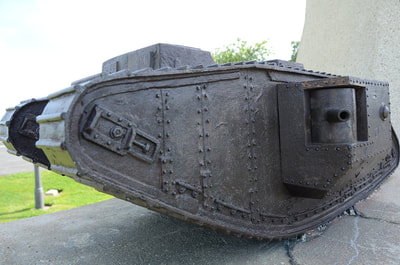 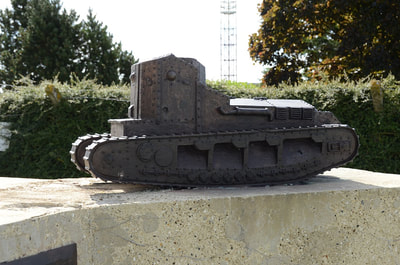 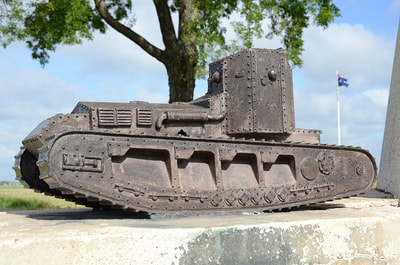 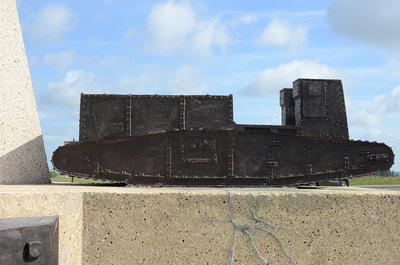 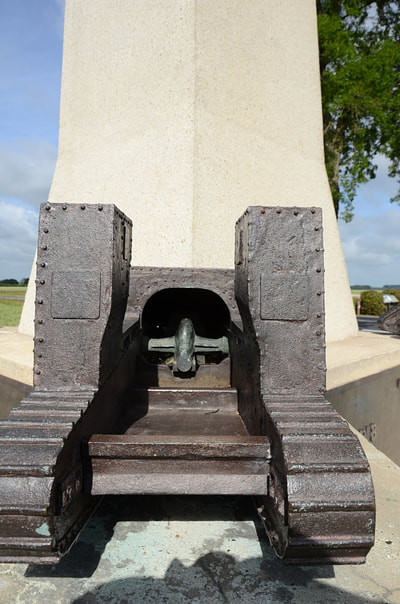 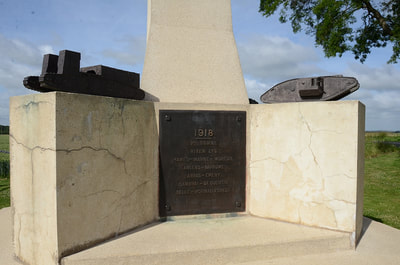