Monacu and Hem-Monacu are two villages about 13 kilometres south-east of Albert, a little south of the road from Albert to Peronne and north of the River Somme. Hem Farm Military Cemetery lies to the west of the village of Hem.

16 kilometres from Albert on the D938 (Albert-Peronne), turn south on to the D146 to Hem-Monacu. After 500 metres turn west onto the D1 to Curlu. Continue for 1.2 kilometres and then turn south.

Hem Farm Military Cemetery can be seen next to a large farmhouse 300 metres down this road.

Hem-Monacu was captured by French troops in the Battles of the Somme 1916, and taken over by British troops later in the year.

Hem Farm Military Cemetery was begun by British troops in January 1917, and used until the following March, and again in September 1918; and these graves now form part of Plot I, Rows E, F and G. It was greatly enlarged after the Armistice by the addition of graves from the battlefields on both sides of the Somme and from the following smaller cemeteries:-

ACHILLE BRITISH CEMETERY, FLAUCOURT, on a trench named Achille Alley, about 1 kilometre East of Flaucourt. This cemetery, begun by French troops, was continued in February and March, 1917, by units of the 48th (South Midland) Division, and contained the graves of 55 soldiers from the United Kingdom.

CLERY-SUR-SOMME FRENCH MILITARY CEMETERY, near the road to Marrieres Wood, where seven soldiers from the United Kingdom and one from Canada were buried in January-March 1917 (the present French National Cemetery is on the Maricourt road).

CURLU FRENCH MILITARY CEMETERY, midway between Curlu and Hem Farm. Curlu was captured by the French on the 1st July 1916, and again by the 3rd Australian Division on the 28th August 1918, and the cemetery contained the graves of 46 Australian soldiers who fell in August and September 1918, and seven from the United Kingdom, all but one of whom fell in the same months. Thirty-two of these graves were taken to Hem Farm and 21 to Suzanne Military Cemetery No.3.

FEUILLERES BRITISH CEMETERY, in the South part of the village, which contained the graves of 27 Australian soldiers who fell in August and September 1918.

FRISE FRENCH MILITARY CEMETERY, FEUILLERES, on the South bank of the Canal, midway between the two villages, in which one soldier from the United Kingdom was buried in April 1917.

MEUDON BRITISH CEMETERY, FLAUCOURT (also known as Meudon Quarry Cemetery), near the North-East corner of Meudon Wood. This cemetery was made by the 1st Division in February and March 1917, and contained the graves of 22 soldiers from the United Kingdom.

NEEDLE WOOD CEMETERY, CLERY-SUR-SOMME (also known as Andover Place) between Clery and Rancourt, which contained the graves of 18 soldiers from the United Kingdom who fell in the winter of 1916-17.

There are now nearly 600, 1914-18 war casualties commemorated in this site. Of these, one-third are unidentified and a special memorial is erected to one soldier from the United Kingdom, believed to be buried among them. Another special memorial records the name of a soldier from the United Kingdom, buried in Clery-sur-Somme French Military Cemetery, whose grave was destroyed by shell fire.

The cemetery covers an area of 2,198 square metres and is enclosed by a red brick wall. 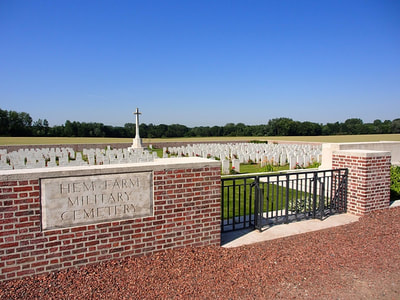 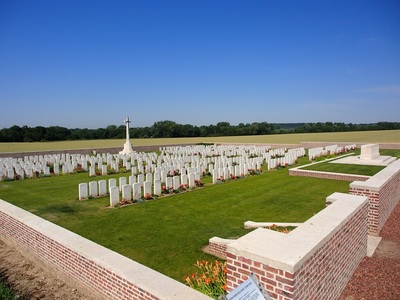 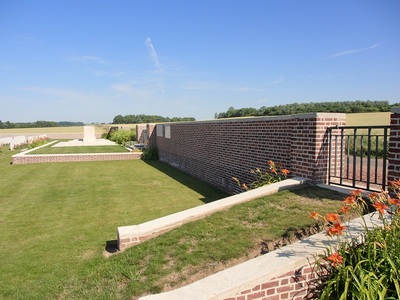 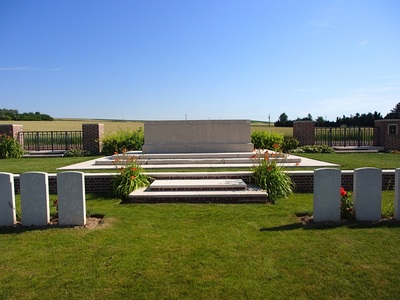 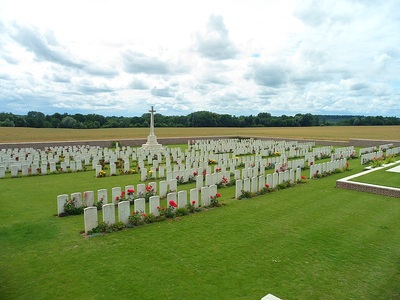 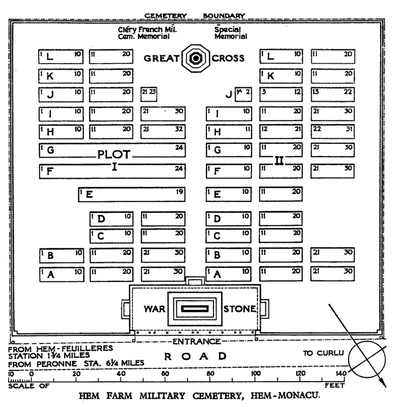 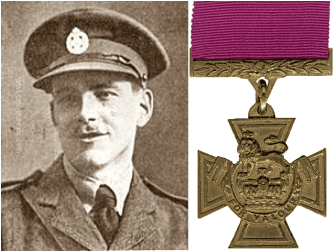 ​His headstone bears the inscription; "I Can Do All Things Through Christ Which Strengtheneth Me" Phil. 4.13."

Citation: An extract from the "London Gazette", dated 11th May, 1917, recorded the following:-"For most conspicuous bravery and self-sacrifice. When engaged with some other men in deepening a captured trench this officer struck with his spade a buried bomb, which immediately started to burn. 2nd Lt. Gates, in order to save the lives of his comrades, placed his foot on the bomb, which immediately exploded. He showed the most conspicuous gallantry and devotion to duty in performing the act which cost him his life, but saved the lives of others." 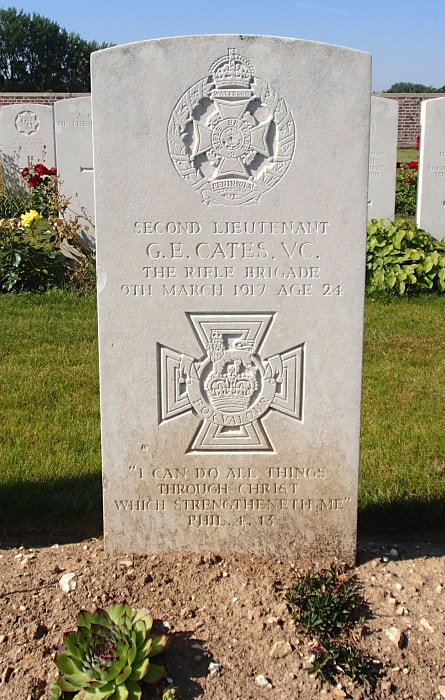 ​His headstone bears the inscription; "His Memory Will Always Live In Hearts That Knew His Worth."

Citation: An extract from the "London Gazette," dated 13th Dec., 1918, records the following:- "For most conspicuous bravery and devotion to duty on the morning of 1st September, 1918, during the attack on the village of Mont St. Quentin. Prior to the advance of the battalion, it was necessary to clear up several enemy strong points close to our line. This the bombing patrols sent forward failed to effect, and the battalion was unable to move. Pte. Mactier single-handed, and in daylight, thereupon jumped out of the trench, rushed past the block, closed with and killed the machine gun garrison of eight men with his revolver and bombs, and threw the enemy machine gun over the parapet. Then, rushing forward about 20 yards he jumped into another strong point held by a garrison of six men who immediately surrendered. Continuing to the next block through the trench, he disposed of an enemy machine gun which had been enfilading our flank advancing troops, and was then killed by another machine gun at close range. It was entirely due to this exceptional valour and determination of Pte. Mactier that the battalion was able to move on to its ' jumping-off ' trench and carry out the successful operation of capturing the village of Mont St. Quentin a few hours later." 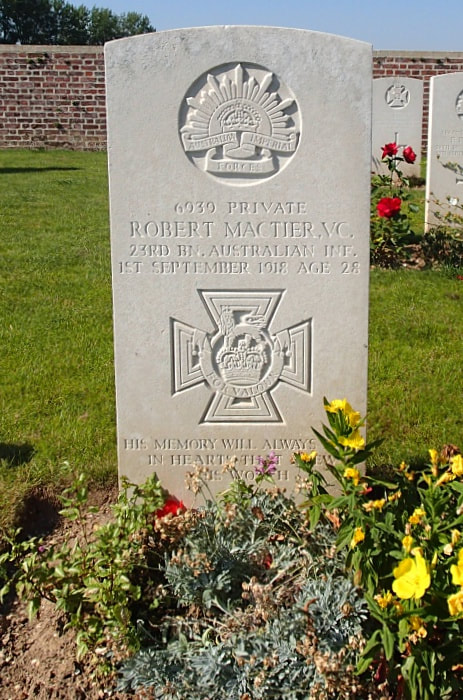 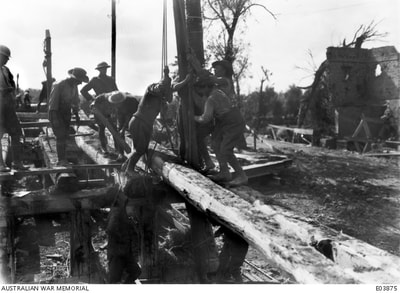 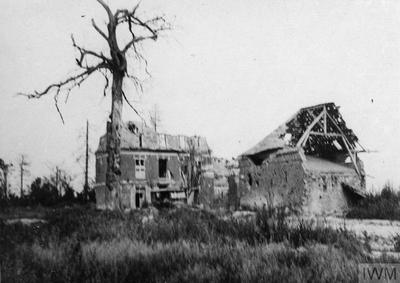 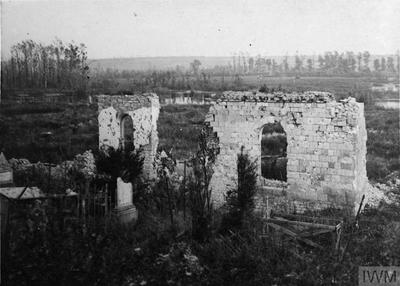 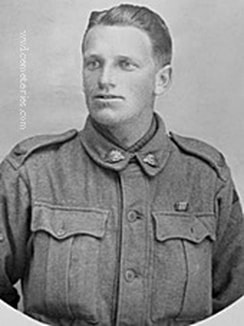 A leather worker prior to enlistment, he embarked with the 14th Reinforcements from Melbourne aboard HMAT Miltiades on 1 August 1916. While serving in Belgium in October 1917, Private (Pte) Bear was awarded the Military Medal (MM) for conspicuous gallantry at Broodseinde for his work maintaining communication lines under heavy fire. Promoted to the rank of Lance Corporal in December 1917, Pte Bear was again recognised for his courage and coolness under fire as a linesman at Herleville in August 1918, and was awarded the Bar to MM. During the battle for Mont St Quentin. 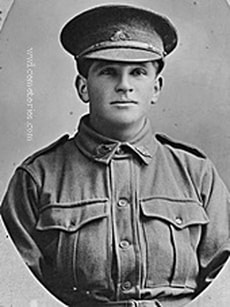 ​His headstone bears the inscription; "He That Loseth His Life For My Sake Shall Find It" Matt. 10. 39."

A farm labourer, he enlisted on 8 February 1916 and served with the 23rd Battalion on the Western Front. Throughout 1916-1917 the 23rd Battalion fought in France at Armentieres, Pozieres and Bullecourt. Later in 1917 the battalion moved to Ypres in Belgium and fought at Broodseinde Ridge.

From April 1918 they took part in the battles of Hamel, Amiens and Mont St Quentin. Pte Davidson died as a result of wounds inflicted at Mont St Quentin on 2 September 1918, aged 26. 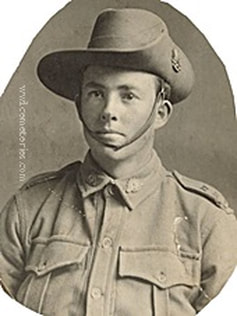 A farmer from Boomerang near Bathurst NSW, Pte Dulhunty enlisted on 16 June 1915. He embarked from Sydney on board HMAT A54 Runic on 9 August 1915 and after advanced training in Egypt he embarked for Gallipoli, arriving on 8 December 1915 where he served for the final eleven days of the campaign. Promoted to Company Sergeant Major (CSM) he served for two years on the Western Front before being killed in action on 31 August 1918. 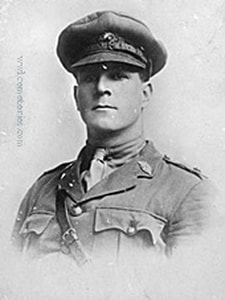 ​His headstone bears the inscription; "To Live In The Hearts Of Those We Love Is Not To Die."
​ 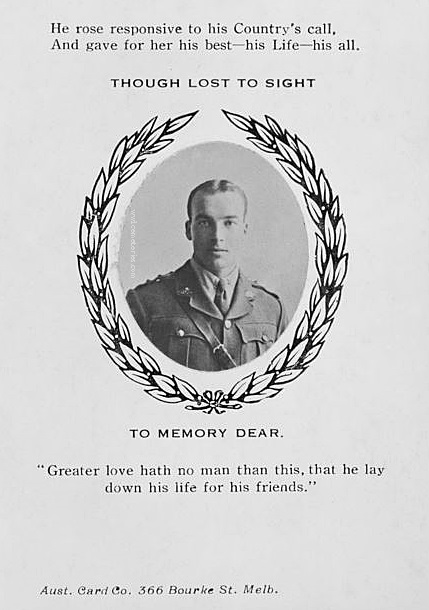 ​His headstone bears the inscription; "Be Thou Faithful Unto Death And I Will Give Thee A Crown Of Life."

This card was produced by his parents and reads: "In loving memory of Stan Le Fevre MC, lieutenant, 39th Battalion, Beloved Son of Mr and Mrs Jas. Le Fevre, Tasmania Who gave his life for the Empire in France August 30, 1918. We mourn your loss, dear Stan, but your actions; Sweet balm to your loved ones bring; For he's ever a hero, the man who dies; For his Country, God and King. You bore your cross, you have gained your crown; Though you sleep in a far off grave; And we think of your life and duty done; Manly unselfish and brave. Too dearly loved to ever be forgotten."
Lt Le Fevre was awarded the Military Cross for conspicuous bravery on 31 May 1917 for the actions he undertook on 28 May 1917 when in broad daylight he brought a wounded man back to the safety of the Australian lines who was some 50 yards in no man's land. 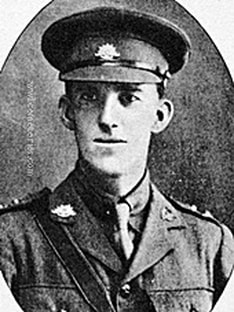 His headstone bears the inscription; "He Was A Father To His Men; The End Of The Upright Man Is Peace." 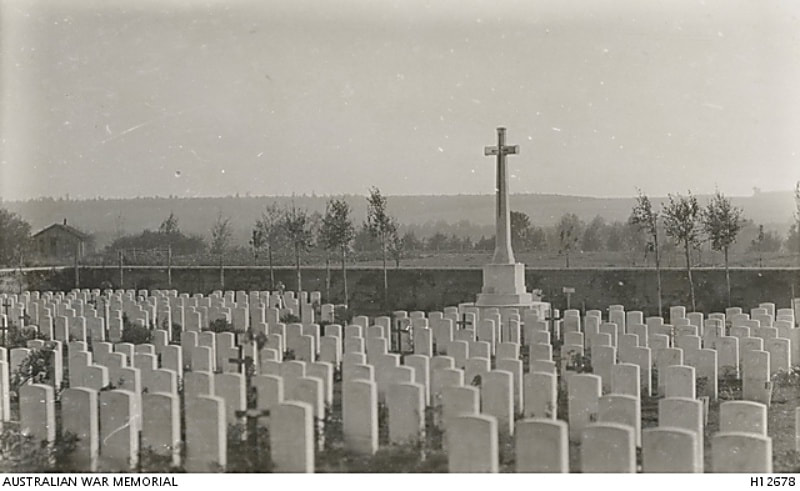 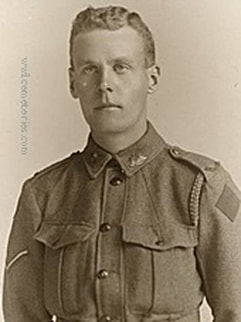 His headstone bears the inscription; "Until The Day Breaks." 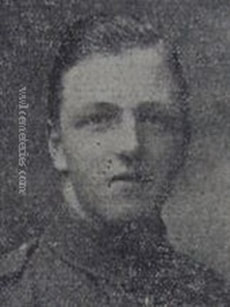 His headstone bears the inscription; "Loved And Remembered By All Who Knew Him." 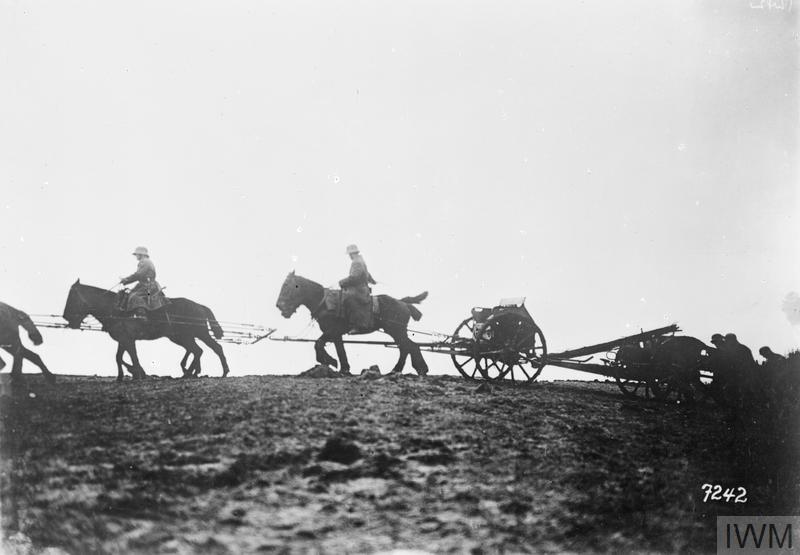