This cemetery has a plot for those men from the "Lusitania" whose remains were washed ashore.

There are now 127 Commonwealth burials of the 1914-1918 war commemorated here. There are also 14 non World War service burials and 1 Belgian Foreign National burial. 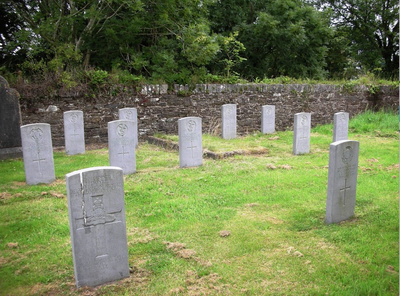 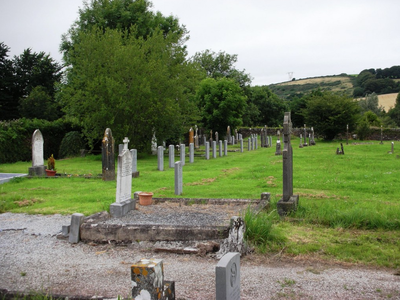 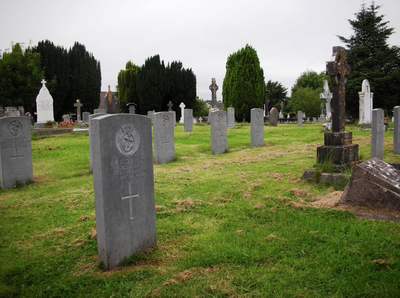 
Citation: The London Gazette dated 24th May 1919 records the following:- "For most conspicuous gallantry and devotion to duty when in command of theHorse Transport "Anglo Californian" on the 4th July 1915. At 8am on 4th July 1915 a large submarine was sighted on the port beam at the distance of one mile. The ship, which was entirely unarmed, was immediately manoevred to bring the submarine astern; every effort was made to increase speed, and a S.O.S. call was sent out by wireless, an answer being received by a man-of war. At 9a.m. the submarine opened fire making occasional hits until 10.30a.m. meanwhile Lieutenant Parslow constantly altered course and kept the submarine astern. At 10.30a.m. the enemy hoisted the signal to abandon the vessel as fast as possible and in order to save life Lt. Parslow decided to obey and stopped engines to give as many of the crew as wished the opportunity to get away in the boats. On receiving a wireless message from a destroyer however urging him to hold on for as long as possible he decided to get way on the ship again. The submarine then opened a heavy fire on the bridge and boats with guns and rifles wrecking the upper bridge, killing Lt. Parslow and carrying away one of the port davits causing the boat to drop into the sea and throwing its occupants into the water. At about 11a.m. two destroyers arrived on the scene and the submarine dived. Throughout the attack Lt. Parslow remained on the bridge on which the enemy fire was concentrated entirely without protection and by his magnificent heroism succeeded, at the cost of his own life, in saving a valuable ship and cargo for his own country. He set a splendid example to the officers and men of the Mercantile Marine."