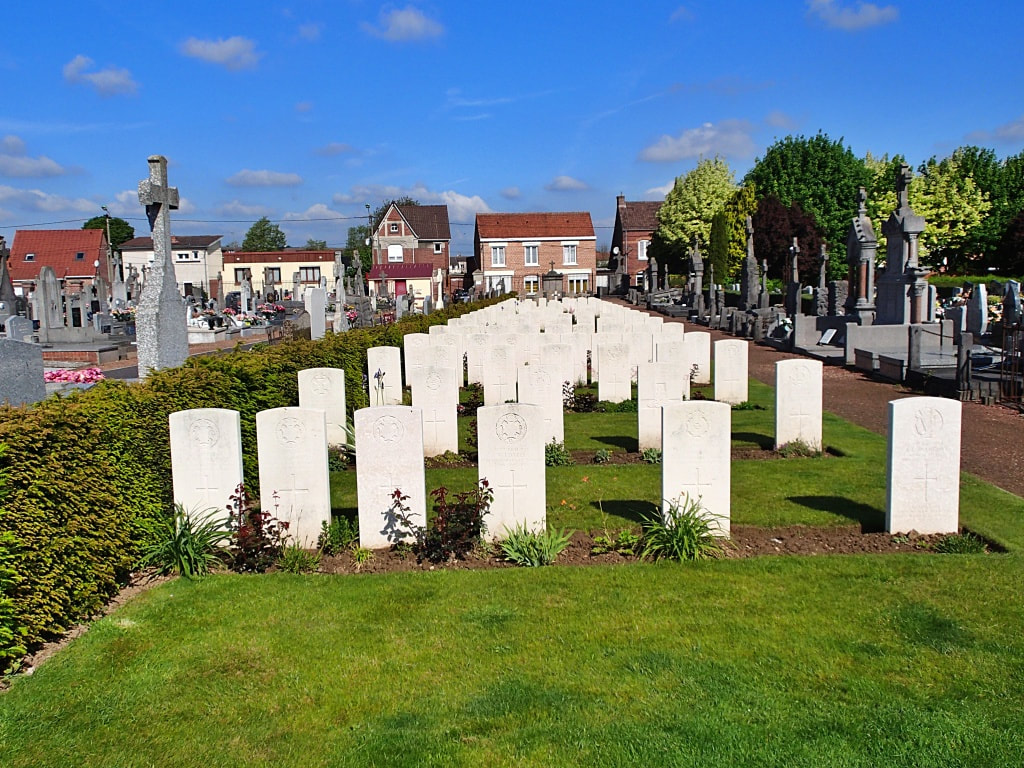 Mazingarbe is a small town located in the Pas de Calais between the larger town of Lens and Bethune.

Mazingarbe Communal Cemetery and Extension is situated adjacent to the Sains-en-Gohelle road from Mazingarbe on the D75, which can be reached from two major roads, the D932 Arras to Bethune road, and the N43 Lens to Bethune road.

The War Graves will be found in two parts of the Communal Cemetery and, as with all town cemeteries, opening hours must be observed.

The adjoining COMMUNAL CEMETERY EXTENSION was begun by the 16th (Irish) Division in April 1916 and was used until October 1918. It contains 248 Commonwealth burials of the First World War and two German graves. 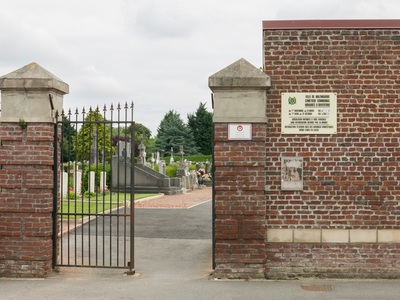 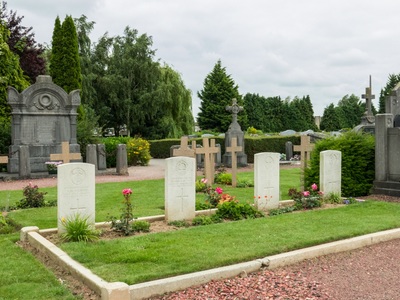 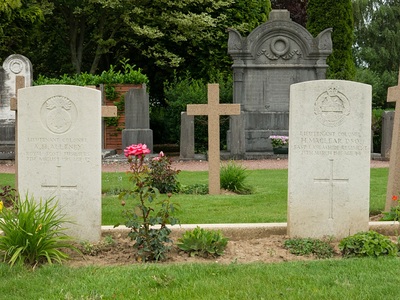 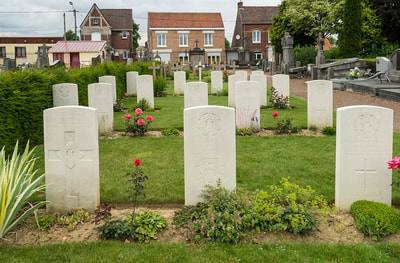 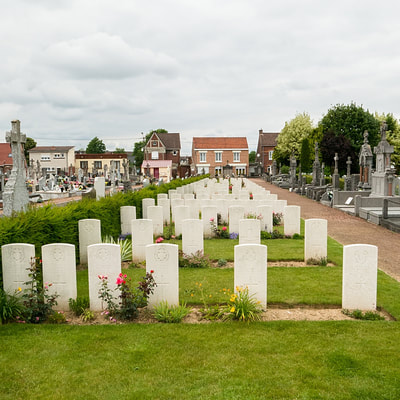 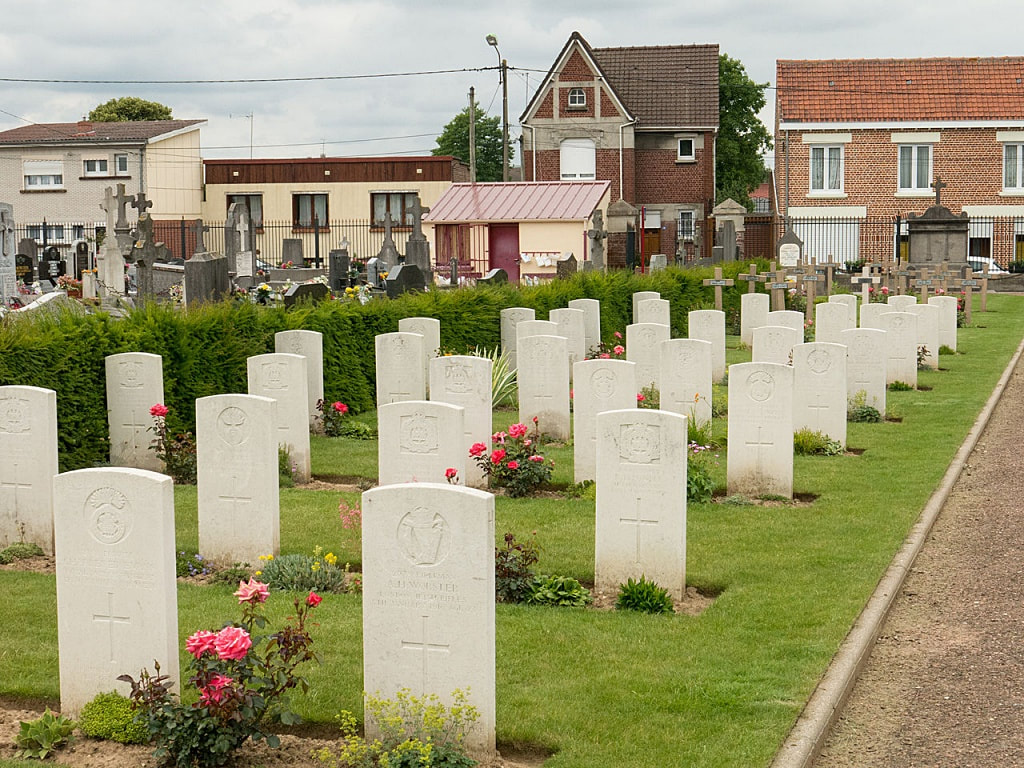 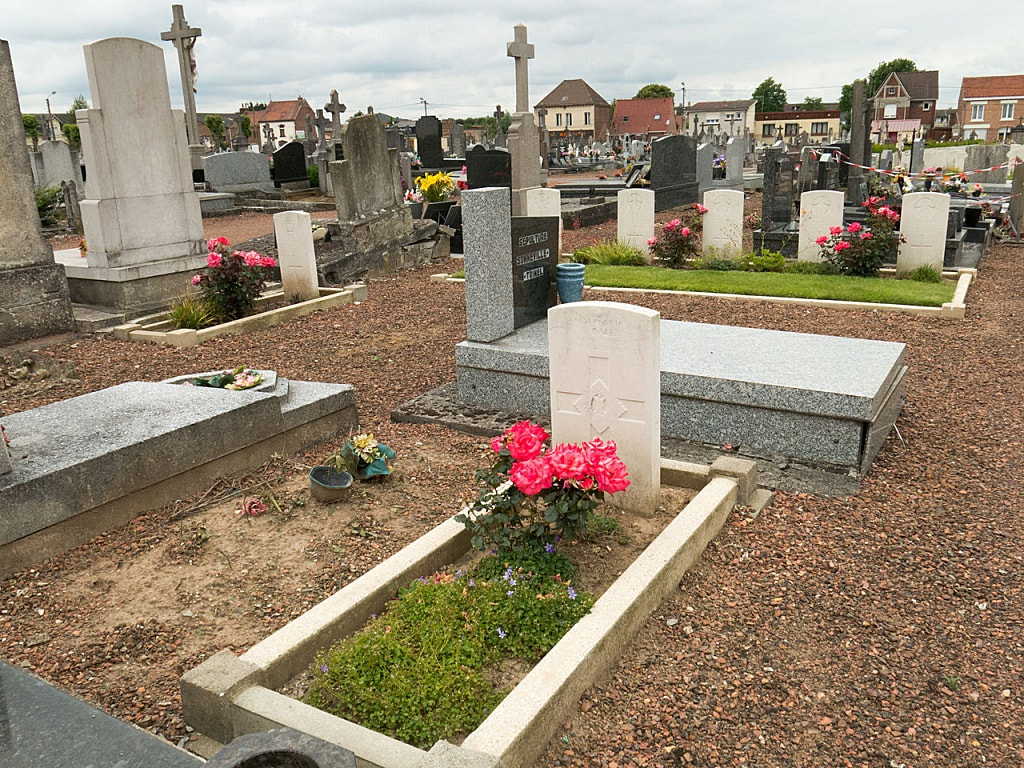 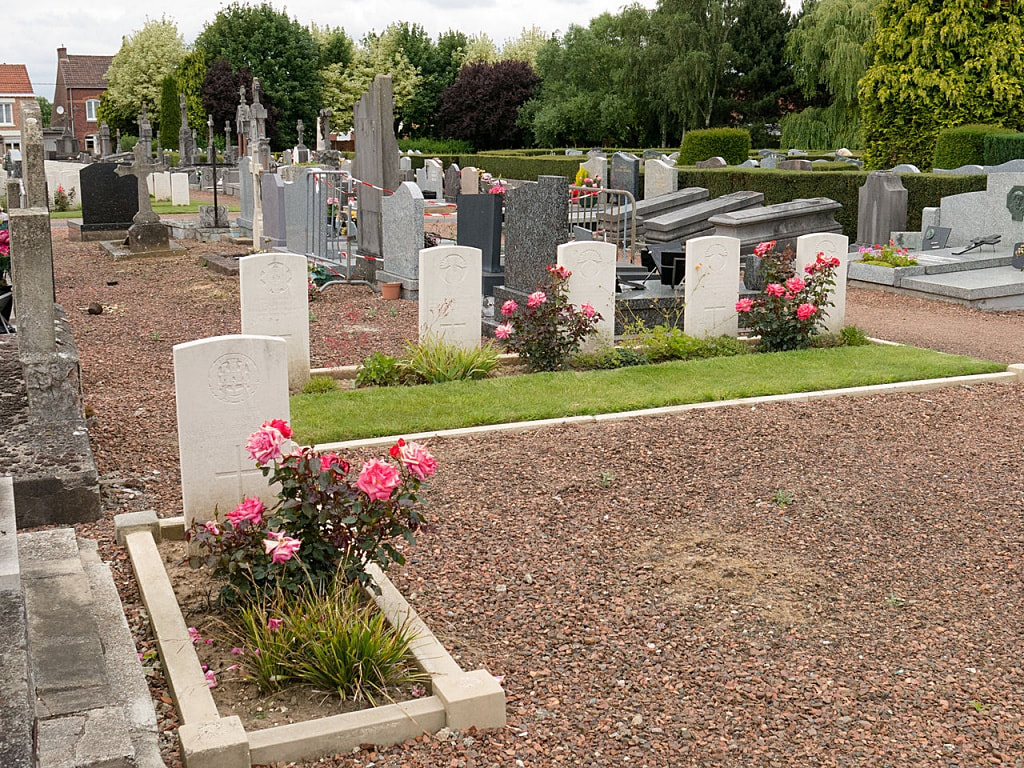 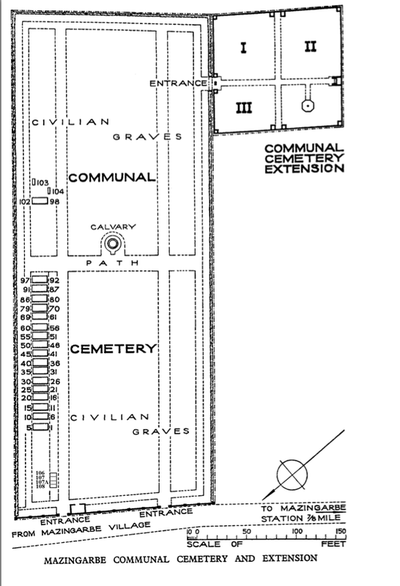 Citation: An extract from the London Gazette, No. 29371, dated 16th Nov., 1915, records the following:- "For most conspicuous bravery on Hill 70 on 26th Sept., 1915. Pte. Dunsire went out under very heavy fire and rescued a wounded man from between the firing lines. Later, when another man considerably nearer the German lines was heard shouting for help, he crawled out again with utter disregard to the enemy's fire and carried him in also. Shortly afterwards the Germans attacked over this ground." 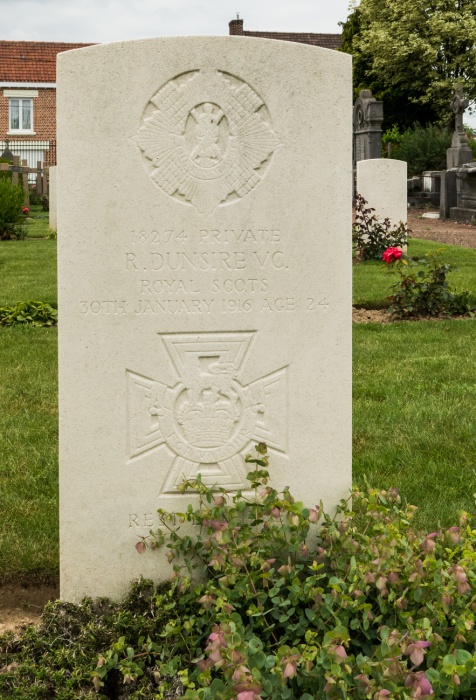 A panorama of Loos, showing on the left the road leading to Crucifix Dump. In the centre of the picture is Loos Crassier with Hill 70 in the background is Fosse 121, Cite St. Pierre. 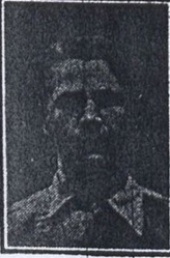 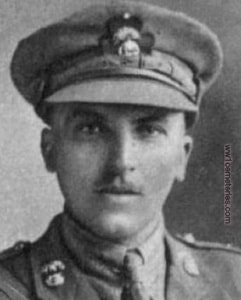 ​His headstone bears the inscription; "Est Voluntas Dei." (It is the will of God) 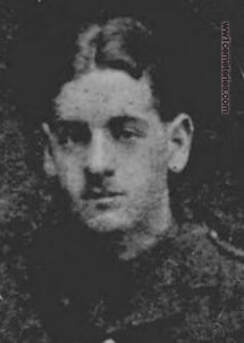 His headstone bears the inscription; "We Also Bless Thy Holy Name."
​ 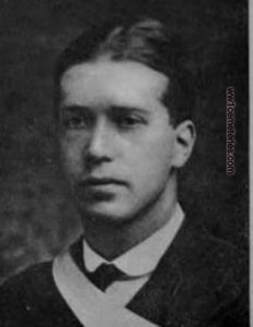 ​His headstone bears the inscription; "Until The Day Breaks And Shadows Flee Away." 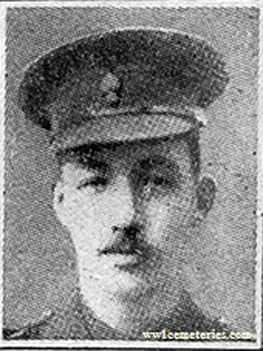 ​His headstone bears the inscription; "Never Forgotten."
Shot at Dawn

In the morning of 7 Feb 1916, Dale was seen to be drunk in an estaminet near his billet at Philosophe, & was told by Lance Corporal Snedden to return to his billet. Dale swore at Snedden, who took him there by his coat. Dale climbed up the ladder to his loft (without assistance), but soon shouted out to the yard below: ‘Here you are, Corporal’, & with his rifle shot Snedden to the ground. He later died of wounds to the abdomen.

Dale was found in the loft, crying (his rifle up against the wall), & variously described as ‘delirious’, & ‘very drunk …& mumbling’. Upon arrest, he appeared not to understand what was being said & was unable to descend the ladder unaided.

At trial, Dale gave no evidence, but defence witnesses spoke of  his friendship with the dead man, & that Dale was a good soldier with a good character.  His defending officer claimed that there was no evidence of malice aforethought; & that Snedden himself had said it was an accident.

After the finding — presumably because Dale had failed to discharge the legal burden on him to prove his lack of responsibility— no recommendation was made by the CO or Brigade commander, & the Corps commander did not consider execution appropriate, but higher authorities disagreed.  (Corns, pp.364-365)
​
Dale's victim is buried at Chocque Military Cemetery, but as a Private.

He enlisted in June 1915, & served at the Battle of Loos.
On the 4 Jan 1916, he was sentenced to death for desertion &  disobedience, the sentence being promulgated as commuted to 5 years’ Penal Servitude on 29 Jan 1916; but by then Docherty was missing again.
For on 24 Jan — after 9 days in the trenches at Loos — Docherty & Pte McCabe made off.  The next day at Béthune, about 7 miles behind the lines, they approached a Corporal of the RMP & sought a billet for the night. Improperly dressed & without passes, they were questioned, admitted desertion & so were arrested.
At court martial (they were tried separately by the same panel on the same day), neither man was represented or made any defence.
After Docherty’s conviction & sentence of death (McCabe received 10 years’ Penal Servitude), the various commanders recommended execution, but after a note emerged from the battalion commander stating that Docherty’s conduct was good before, but bad after Loos, medical examination was ordered. The finding was that Docherty suffered from marked neurasthenia, but the 2 doctors were unable to say that it resulted from shell-shock or was of recent onset.  However sentence was confirmed: Docherty was the first Kitchener volunteer to be executed. (Corns, pp. 342-343; Putkowski, p. 62-63)
​
9948 Private James Graham, 2nd Bn. Royal Munster Fusiliers executed for desertion 21st December 1915. Grave 42. Son of Mrs. Jane Graham, of 16, Lavitts Lane, off Old Market Place, Cork.

On 25 January 1915 he went absent immediately prior to a German attack at Givenchy.  Graham was arrested in a brothel in Béthune on November 14: he gave false particulars of identity & had been using a corporal’s stripes & carrying a false identity disc.  At trial there were additional charges relating to frauds committed during his long absence.  (Putkowski, p.56)

On 11 October 1915 he made off whilst on sentry duty in a support trench near Mazingarbe, prior to a renewed attack.  Jones was arrested the following day in Béthune, but on 14 December escaped, remaining at large till 3 February.  At trial he asserted that he had deserted because his platoon sergeant continually victimised him.  For some unknown reason, he was buried in an isolated grave quite separate from the other British military burials at the Communal Cemetery.  (Putkowski, p.65)
​

​On 23 January 1916 he deserted at Noeux-les-Mines when warned for the trenches.  Lewis was arrested in civilian clothes at Thiennes on 10 February, maintaining, amongst other things, that he was an American.  At trial he claimed to be prone to epileptic fits & loss of memory, resulting from a factory explosion a few years previously.  Medical examination thereafter was inconclusive.  (Putkowski, pp.69-70)

Pictures below of S. A. D. burials © Werner Van Caneghem
​ 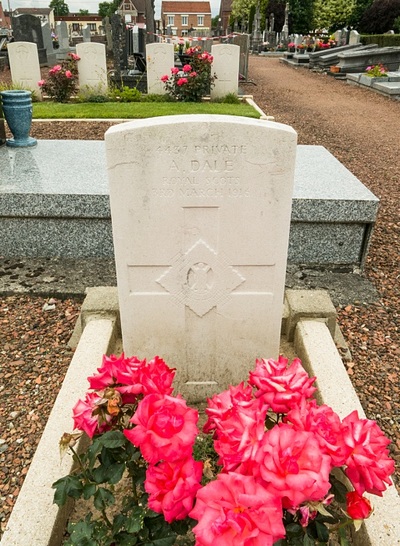 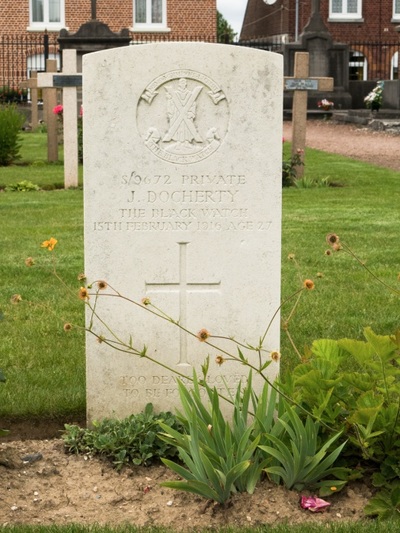 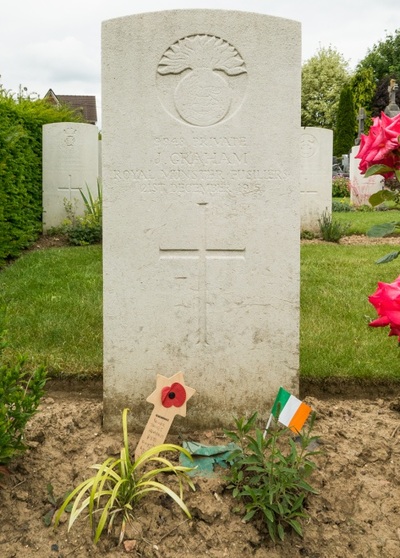 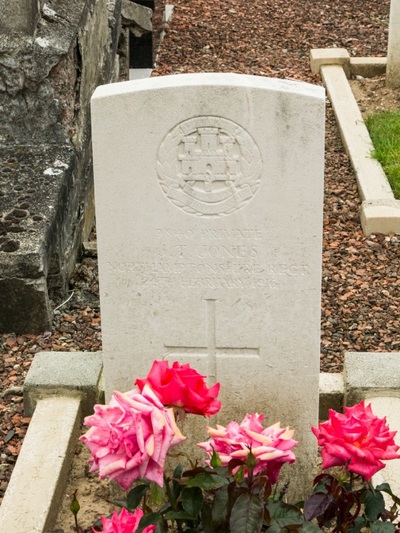 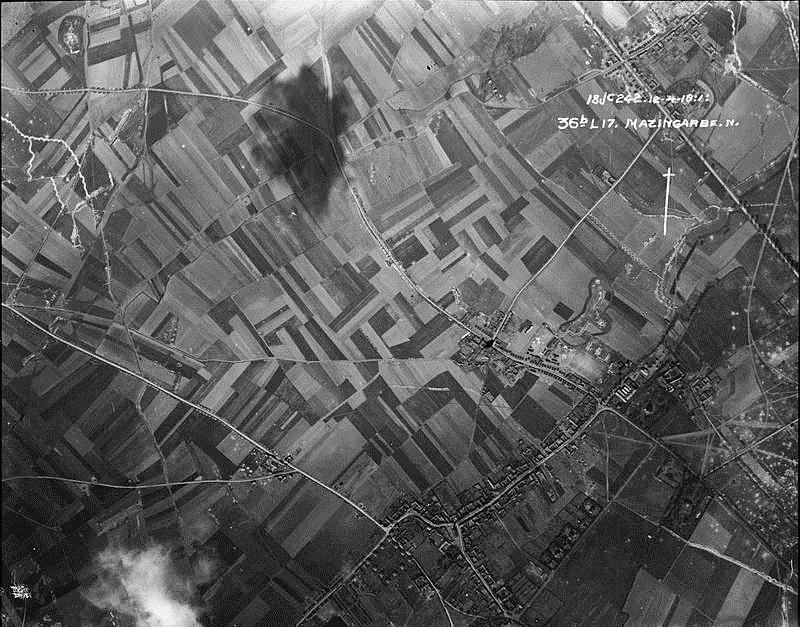 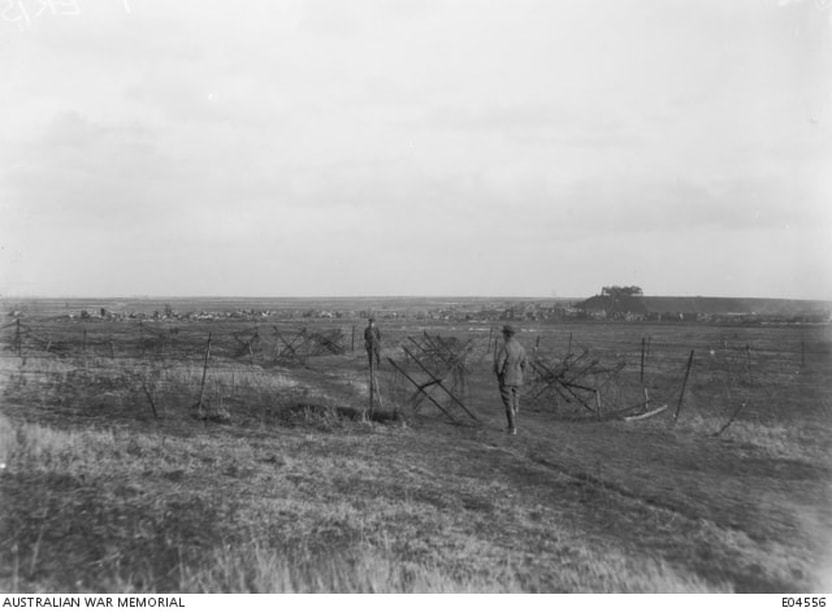 A view of the wire entanglements behind Loos Tower Bridge, with Fosse 15 and Loos Crassier in the background. The 3rd Australian Tunnelling Company (3ATC) were engaged on trench shelter construction and repair in this area after the battle of Hill 70, in August 1917. The wire entanglements formed part of a reserve line of defence across Crucifix Dump road through the old German lines to Hulluch. Identified: Lieutenant T. Taylor, 3ATC (left), and an unidentified sergeant, who is an assistant photographer with Captain Wilkins (right). 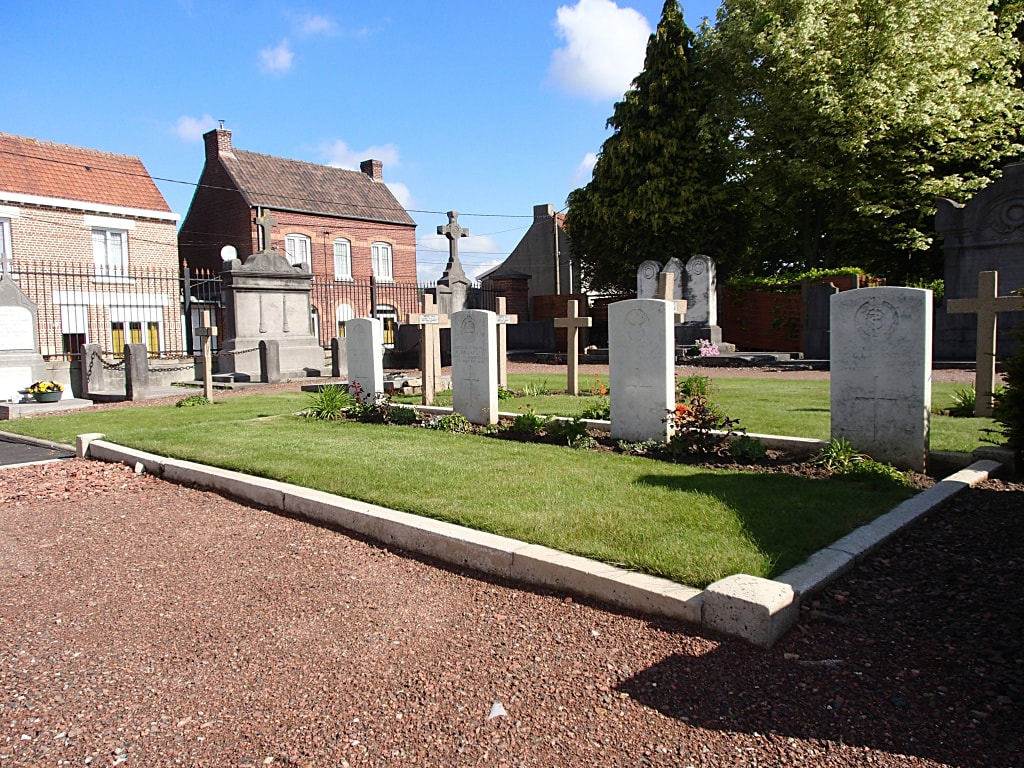