In the early summer of 1915, Commonwealth forces relieved French troops on this part of the front and Mericourt-Ribemont Station became a railhead. The extension to the communal cemetery at Mericourt was begun in August 1915 and was used chiefly by field ambulances until July 1916, when it was closed until the German advance of March 1918. From March 1918 to August 1918 it was used by units engaged in the defence of Amiens. After the Armistice, Rows G and K of Plot III were added when isolated graves (only one of which could be identified) were brought in from the battlefields north-east of Mericourt.

There are now 411 Commonwealth burials and commemorations of the First World War in the extension. 73 of the burials are unidentified and there are special memorials to two casualties buried in the German cemetery at Clery-sur-Somme whose graves could not be found. The extension also contains 11 German burials. 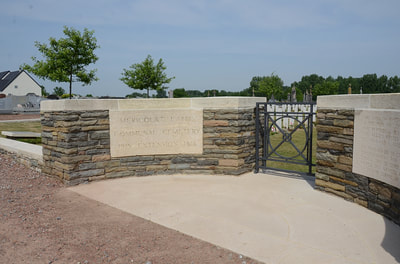 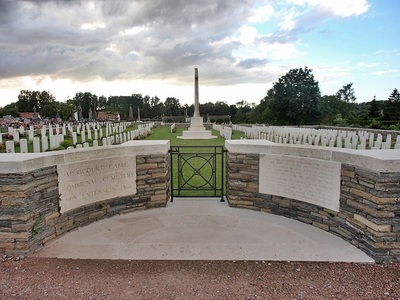 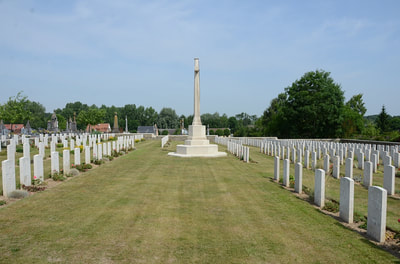 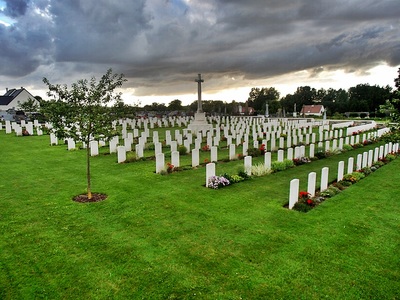 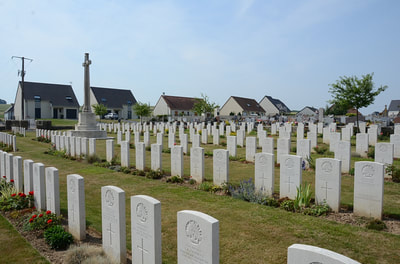 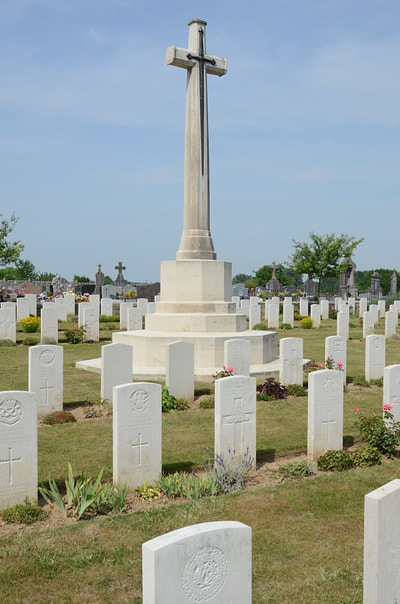 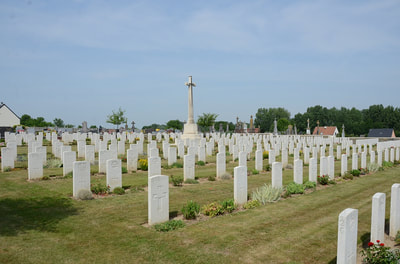 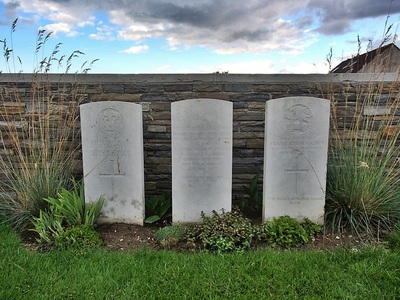 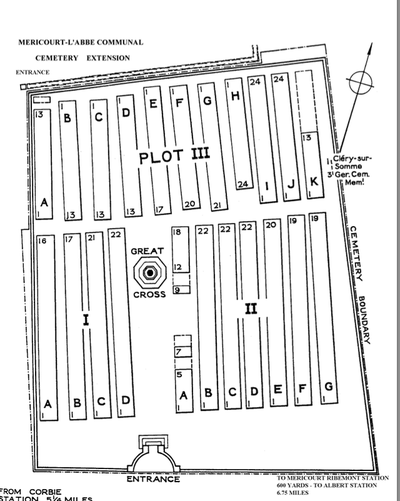 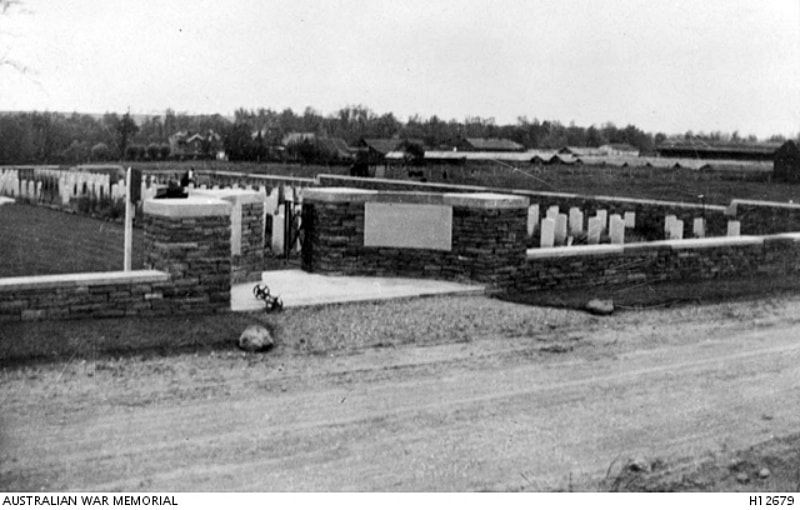 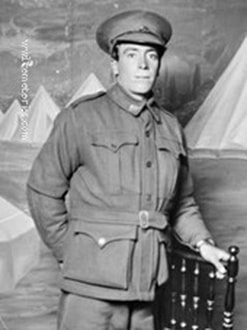 ​His headstone bears the inscription; "In Loving Memory Of Our Dear Son. Loved In Life Treasured In Memory."

A labourer from Ravenswood, Victoria prior to enlistment, Pte Adams embarked with B Company from Melbourne on HMAT Runic on 20 June 1916. Later transferring to the 59th Battalion, he was killed in action on 19 June 1918, aged 26, 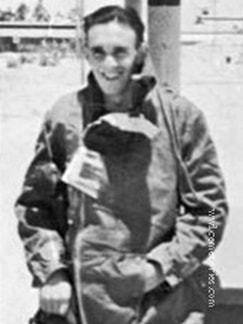 Son of Charles and May Burgess, of Preston, Tasmania.

His headstone bears the inscription; "In Memory Of Our Dear Son, Sadly Missed."

A farmer prior to enlistment he embarked from Melbourne with the 9th Reinforcements on board HMAT 30 October 1917. Pte Burgess was killed in action on the 8 May 1918, aged 19. 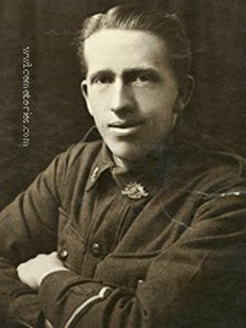 ​His headstone bears the inscription; "His Name Is Written In Love In Hearts He Left At Home."

A grocer prior to enlisting in July 1915, Pte Carnall embarked from Melbourne with the 29th Battalion, 3rd Reinforcements on board HMAT Ballarat (A70) on 18 February 1916. He arrived in England in April 1916 and after further training arrived for service in France on 23 June 1916. In November he was hospitalised with trench foot and sent back to England for recovery and furlough. In April 1917 he was transferred to the 66th Battalion and remained in England for training until October 1917 when he was returned to France. Pte Carnall, called "Snow" or "Snowy" by his mates,because he had fair hair, was killed in action on the evening of 23 July 1918 when a shell exploded in a dug out at Morlancourt in which he and others were waiting in reserve. He was 20 years of age.

325 Sergeant J. A. Pittock saw William Carnall being taken out of the line;

"I saw him on a stretcher being taken to the A. P. (Aid Post). He was badly wounded when we were holding the front line at Morlancourt, he and 4 others were killed by one shell. he was alive when I saw him on the stretcher and I know that he died soon after. He had been in the same company as me since 1916." 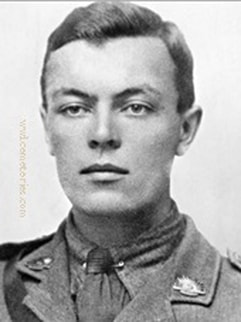 ​His headstone bears the inscription; "...Nothing But Well And Fair And What May Quiet Us In A Death So Noble." (From 'Samson Agonistes' by John Milton.)

A law clerk from Lilydale, Vic prior to enlistment, Lt Eales embarked with the rank of Corporal with D Company from Melbourne on HMAT Ulysses on 10 May 1915. On 21 August 1917 he was awarded the Distinguished Conduct Medal for daring and valuable reconnaissance work. Later, with the rank of Lieutenant, he was killed in action on 19 May 1918.

​252 Corporal L. F. Nielson gave this description of the events leading to the death of Thomas Eales;

"Eales was killed at Ville-Sur-Ancre about the middle of May. After Ville-Sur-Ancre had been taken and things had quieted down a bit, a party went into the place to "clear up." Lt. Eales was one of these, I was another.One of our shells burst short, just above us, but only 3 men hit, 2 men wounded Lt Eales killed. He put his hands up to his neck and said "I've got it," they were the last words he spoke and he died directly after. He was also hit in the body. The attack was at 2.30a.m., and he was killed at 8a.m. He was carried away the same day. he was in charge of No.3 platoon, Lt. Eales was very popular and we were awfully sorry when he was killed. He was always considered such a good soldier." 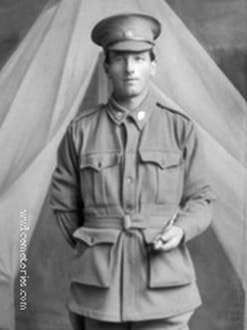 ​His headstone bears the inscription; "In Memory Of The Dearly Loved Son Of Mr. & Mrs.H.R.Gill Of Melbourne."

An orchardist prior to enlisting on 15 August 1916, Pte Gill, embarked from Melbourne aboard HMAT Hororata on 23 November 1916. He was wounded in action on the Albert-Amiens Railway Line near Morlancourt, France. On 14 May 1918, aged 23 years, he succumbed to his wounds later that same day. 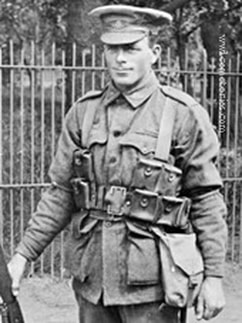 A farmer prior to enlistment, he embarked on board HMAT Medic (A7) on 16 December 1916. Pte Hogan, a stretcher bearer, was killed by a shell explosion as he was going to the assistance of a wounded man at Morlancourt, France, on 29 July 1918. He was 29 years of age.

2181 Private A. P. Leighton gave this description of the death of Roger Hogan;

"I knew casualty, he was a man of medium build about 5ft 8ins. fair complexion, about 25 years of age. Casualty was in the advance at Morlancourt. He was a stretcher bearer and was going forward to get a wounded man when an H. E. shell landed near, a fragment entering his head, killing him instantly. I was about 20 yards away at the time and saw him killed. He was buried near where he fell and a cross was erected over his grave." 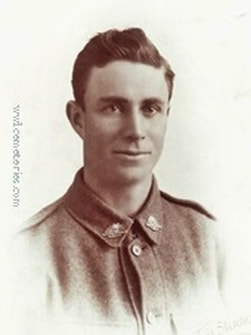 An accountant prior to enlisting in July 1915, he was promoted to the rank of Sergeant (Sgt) on 1 November. Sgt Jackson embarked from Melbourne on board HMAT Ascanius (A11) on 10 November 1915. Following some months in Suez, Sgt Jackson and his unit arrived in France on 23 June 1916. In January 1917 Sgt Jackson was promoted to the rank of 2nd Lieutenant and on 28 May he was promoted to Lieutenant (Lt). A few weeks later he became ill and was sent to England for treatment. He was diagnosed with trench fever in July and did not return to France until February 1918. Lt Jackson was killed in action in France, probably at Morlancourt, on 23 July 1918. He was 27 years of age. 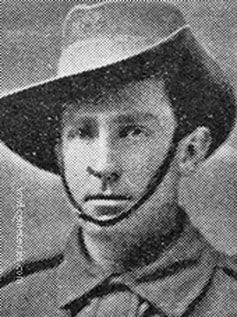 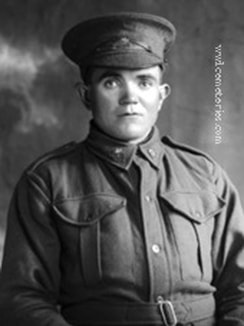 A 25 year old labourer prior to enlisting on 5 May 1916, he embarked for overseas with the 8th Reinforcements from Melbourne on 1 August 1916 aboard HMAT Orsova. While serving in France, he was wounded in action on 3 August 1917 and evacuated to England for medical treatment. He returned to France on 14 October 1917 and was killed in action on 29 July 1918. 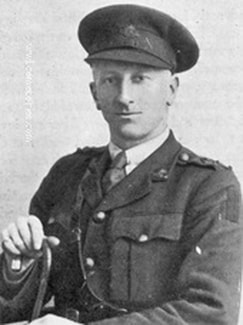 ​His headstone bears the inscription; "Righteousness And Judgment Live By This Death."

​1666 Private Alex Gordon was the stretcher bearer who picked up Edward Richardson's body;

"When leading a ration party toward the front line on June 22nd, he was hit by a piece of shell in the left side after the party had got about half the distance they had to go. I saw him about 5 minutes after he was hit, he was then dead. I do not know where he was buried. The ground was held." 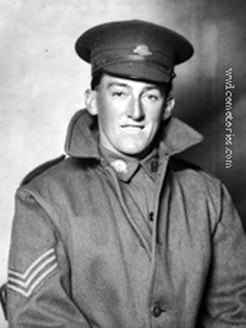 ​His headstone bears the inscription; "In Loving Memory Of Our Dearly Beloved Son & Brother R.I.P."

A 23 year old clerk when he enlisted in the AIF on 31 July 1915, he embarked for overseas with the 18th Reinforcements from Melbourne on 3 July 1916 aboard HMAT Ayrshire. He was an Acting Sergeant for the voyage to England and reverted to the rank of Private on arrival and was then transferred to the 59th Battalion in France on 22 November 1916. After also serving with the 67th Battalion and being promoted to the rank of Corporal (Cpl) on 17 August 1917, he was then transferred to the 59th Battalion on 19 September 1917. Cpl Rule was killed in action on 4 July 1918 at Morlancourt, France. 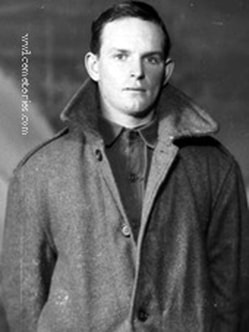 ​His headstone bears the inscription; "In Loving Memory Of Our Dear Son & Brother."

3637 Private G. McMillan was close to Cecil Teasdale when he was killed;

"I knew casualty, he was a tall man, well built, fair complexion, about 21 years of age. Casualty was in the front line trench at Morlancourt, he was sniped by a rifle bullet which entered his head, killing him instantly. I was 6 yards away at the time of his death, I examined his body one minute later."

A 22 year old driver prior to enlisting on 6 July 1917, he embarked for overseas with the 8th Reinforcements from Melbourne on 21 November 1917 aboard HMAT Nestor. Following further training in Egypt and England, he joined the 60th Battalion in France on 17 April 1918. He was killed in action at Morlancourt, France on 4 July 1918. 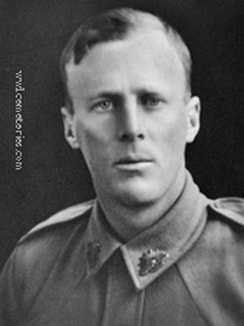 ​His headstone bears the inscription; "The Cherished Husband Of Daisy And Loved Father Of Coline Our Hero."

A farmer before enlisting in June 1916, Sgt Tyler left Australia for England with the 19th Reinforcements, and arrived in November 1917. He was killed by a machine gun bullet during a raid on German positions at Morlancourt on 9 June 1918, aged 33. His body was left where it fell but recovered the following day. Eye witnesses recalled that he still had his revolver gripped tightly in his hand. 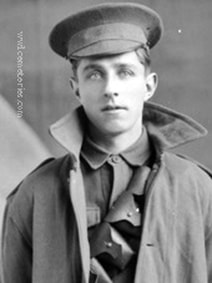 A 19 year old electrician prior to enlisting on 4 July 1917, he embarked for overseas with the 8th Reinforcements from Melbourne on 21 November 1917 aboard HMAT Nestor. After further training in Egypt and England, he transferred to the 60th Infantry Battalion in February 1918 and deployed to France in April 1918. Pte Watson was killed in action at Morlancourt, France on 5 July 1918.

"I saw Watson (C Coy.) hit by a piece of shell on the arm and chest while we were coming out after being relieved at Treux (near Ribemont.) He only lived about 10 minutes, dying at the dressing station. I saw him buried in a cemetery behind Treux village and also the cross erected over the grave." 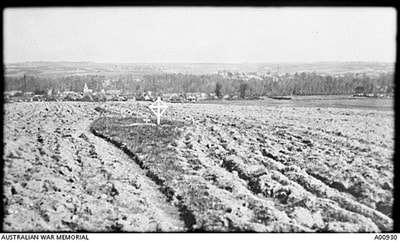 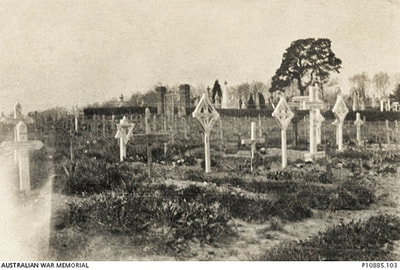 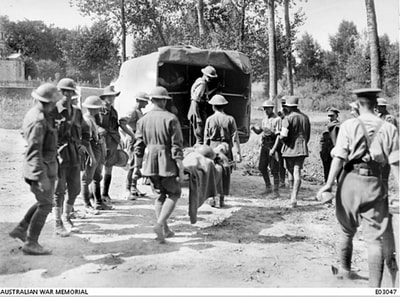 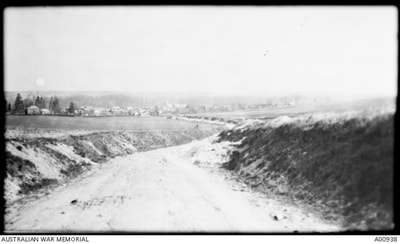 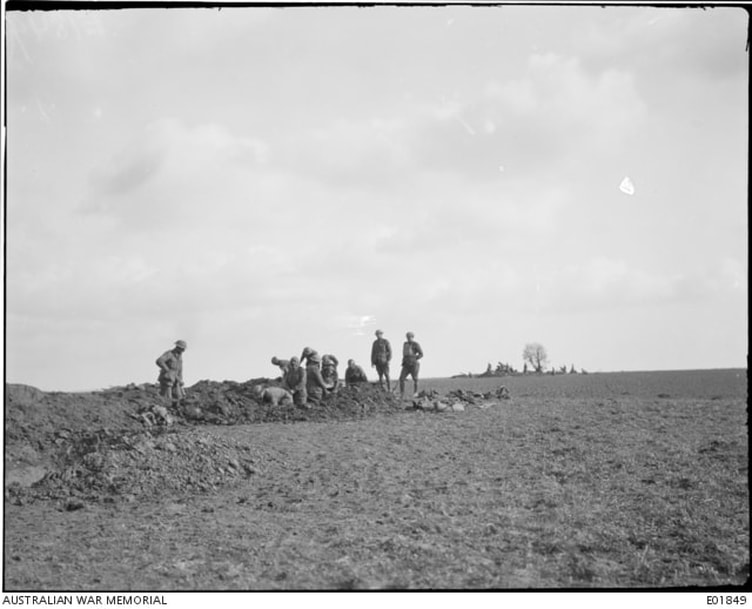 29th March 1918; Infantrymen of the Australian 3rd Division digging a new reserve trench system near Mericourt l'Abbe, in France. While the front line troops engaged the advancing Germans and prevented their rush on Amiens, other troops prepared further defensive positions upon which to fall back. There was, however, no retirement on the part of the Australian Corps.