Neuville-Bourjonval is a village 14 kilometres east of Bapaume and 4 kilometres south-east of Belincourt.

The rough access track leading to the cemetery may be difficult under bad weather conditions.

Neuville-Bourjonval village was taken on the 28th-29th March 1917, by the 12th King's Liverpool Regiment, lost on the 22nd March 1918, and retaken on the following 4th and 5th September by the 42nd (East Lancashire) Division.

The British Cemetery was begun by the 11th Rifle Brigade in April, 1917 and used by the 42nd and other Divisions until March 1918; further burials were made in Rows B and C in September 1918.

There are now over 200, 1914-18 war casualties commemorated in this site. Of these, a small number are unidentified and four are represented by special memorials.

The British Cemetery covers an area of 829 square metres and is enclosed by a low rubble wall.

12609 Private Private George Hanna, 1st Bn. Royal Irish Fusiliers, executed for desertion 6th November 1917, aged 26. Row E. 16. Son of Henry and Elizabeth Hanna. He had seen action in the Dardanelles & served in Salonika before transfer to the Western Front.  Hanna had twice previously been convicted of desertion, being sentenced to death on the second occasion.  But it seems that this last sentence was commuted to 7 years’ Penal Servitude before being suspended. (Putkowski,pp.213-214) 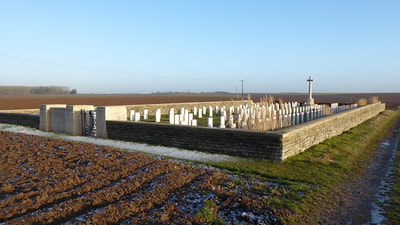 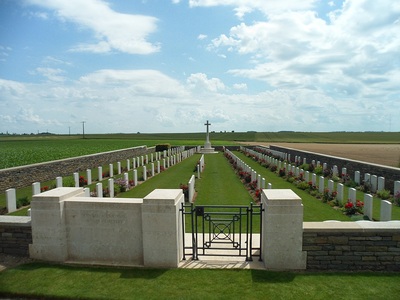 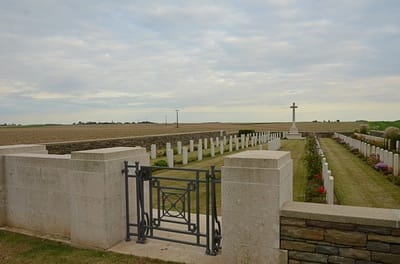 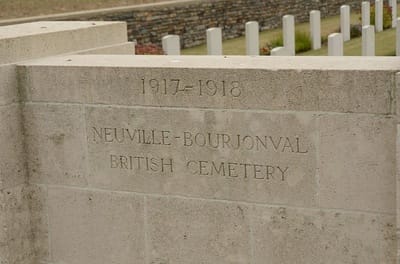 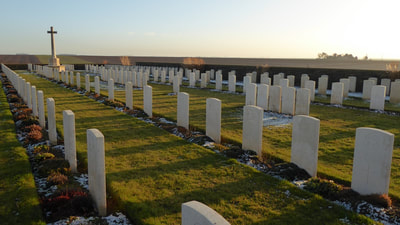 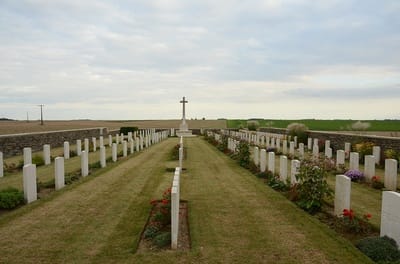 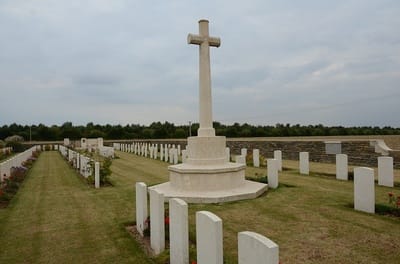 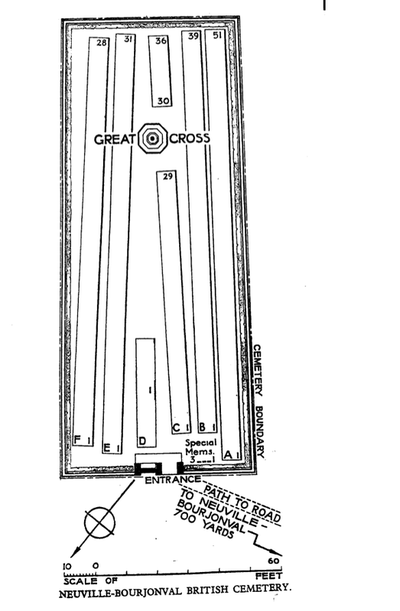 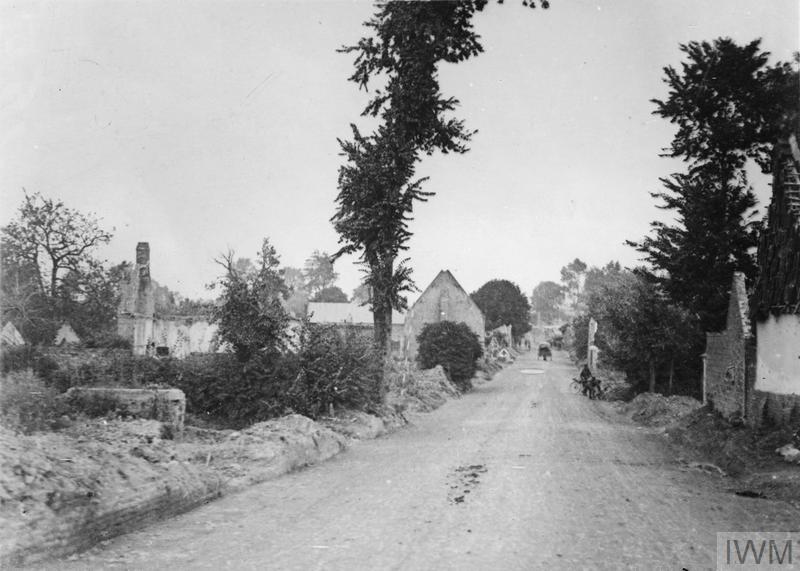 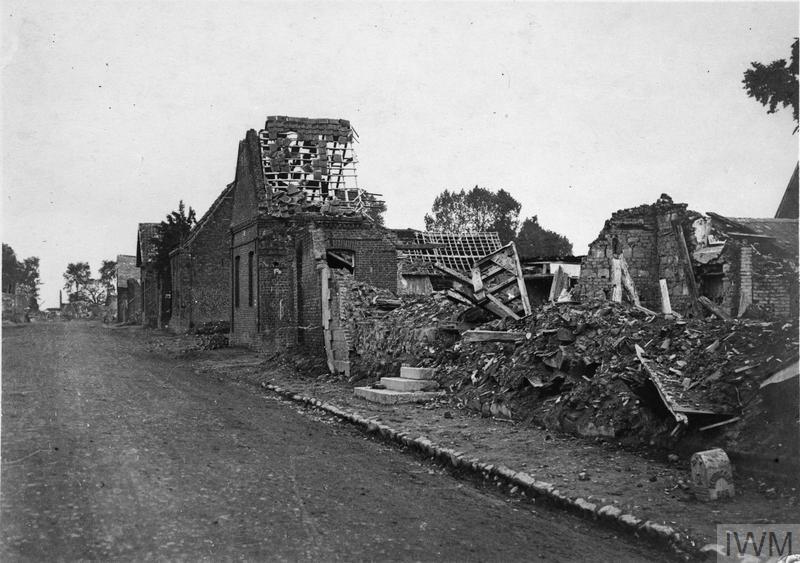 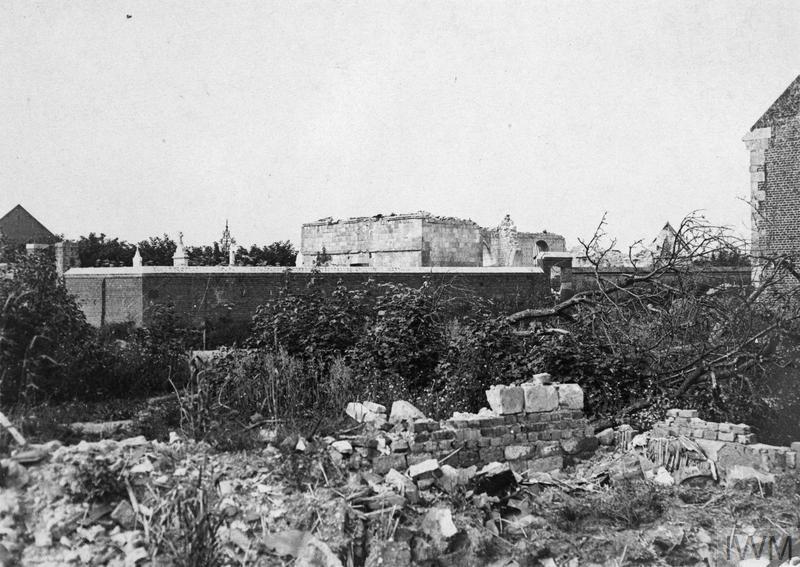 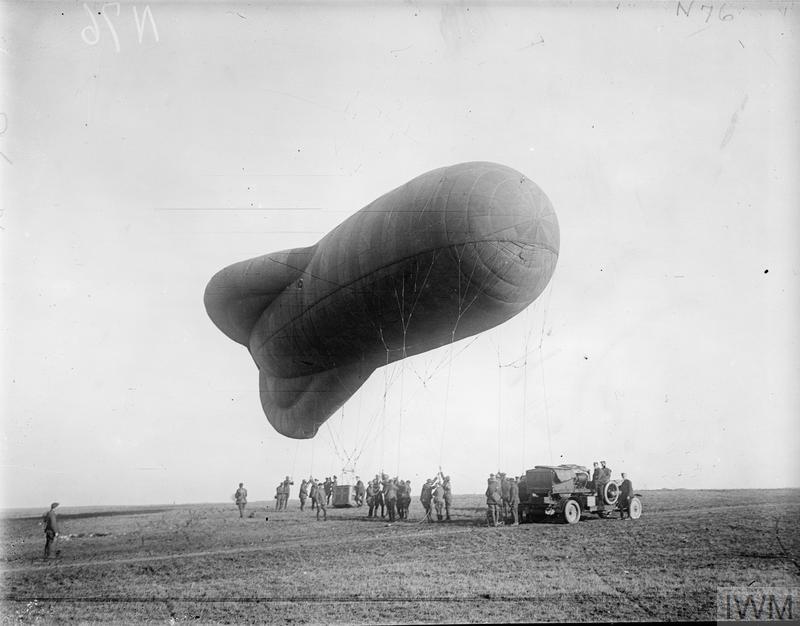 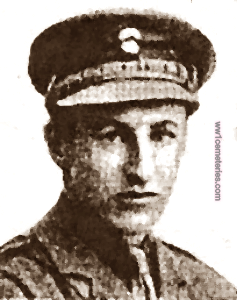 ​His headstone bears the inscription; "One Moment The Noise Of Battle The Next The Peace Of God." 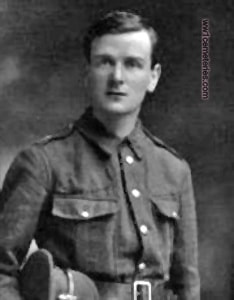 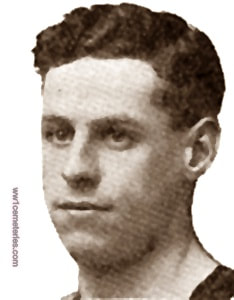 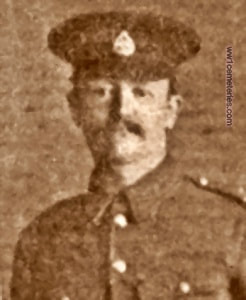 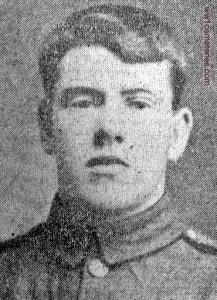 Billy, as he was known, joined the army in December 1914, he served in the Dardanelles and Egypt and arrived in France in March 1917. Prior to enlisting he worked at Pickles' Cairo Mills in the Whittlefield district of Burnley. Billy had not been home on leave for over 2 years and was expecting to go "any day," when he was shot through the head, a friend said in a letter that he didn't suffer much and died shortly afterwards. 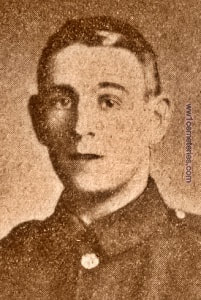 His headstone bears the inscription; "Gone But Not Forgotten."

John enlisted on 8th October,1914 and served in the Dardanelles and Egypt before being transferred to France. Prior to enlisting he was foreman bottler at Messrs. Grimshaw's wine and spirit department, Burnley. He left a widow, Annie and his little girl who was just 15 months old when he last saw her. His wife, Annie, received a letter telling her that John was killed, along with others, by a  shell. 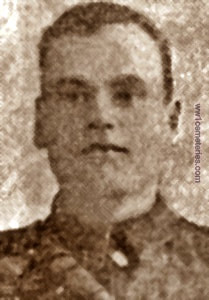 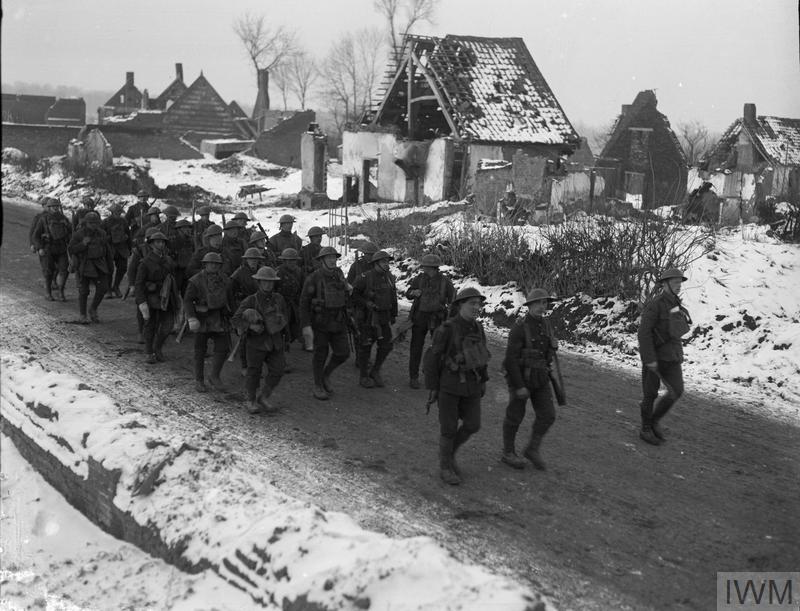 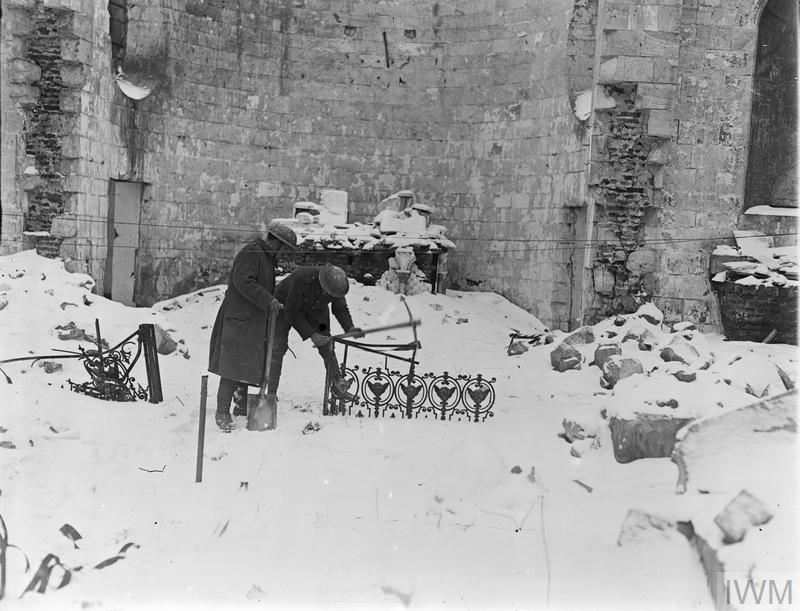 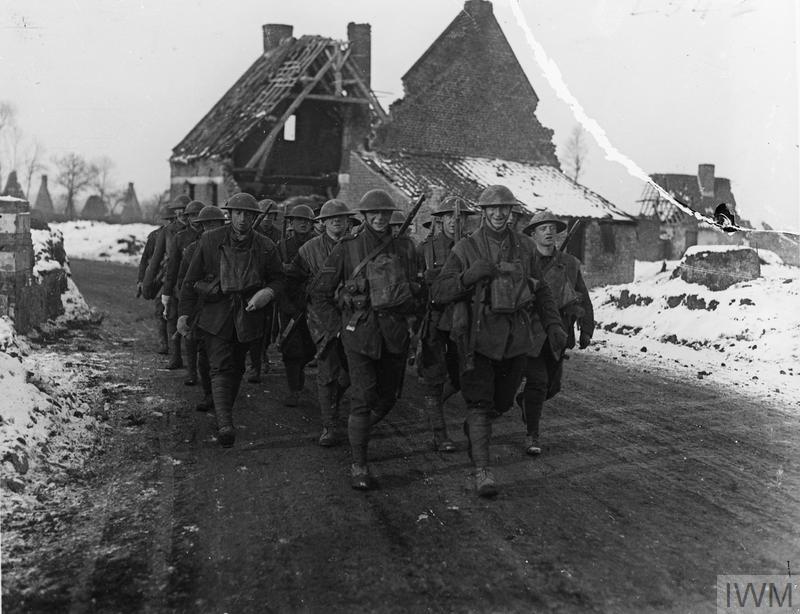 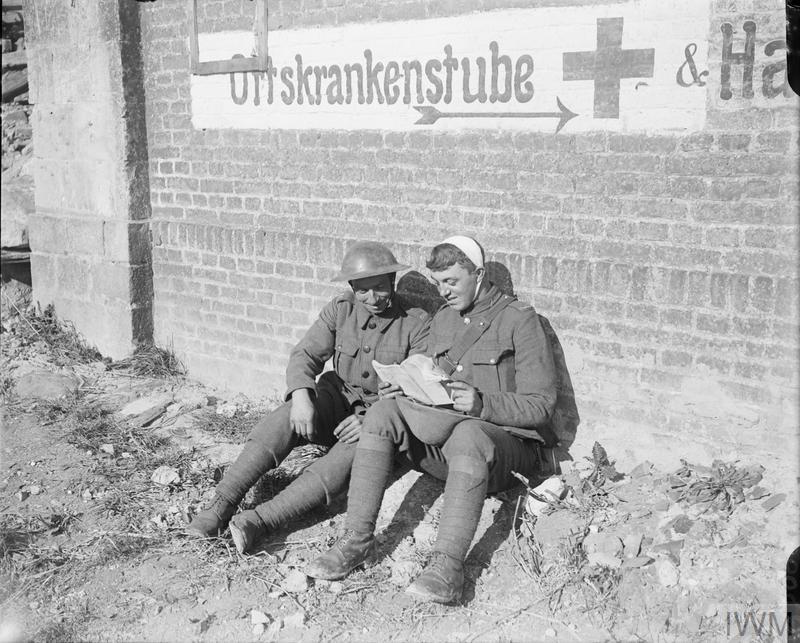 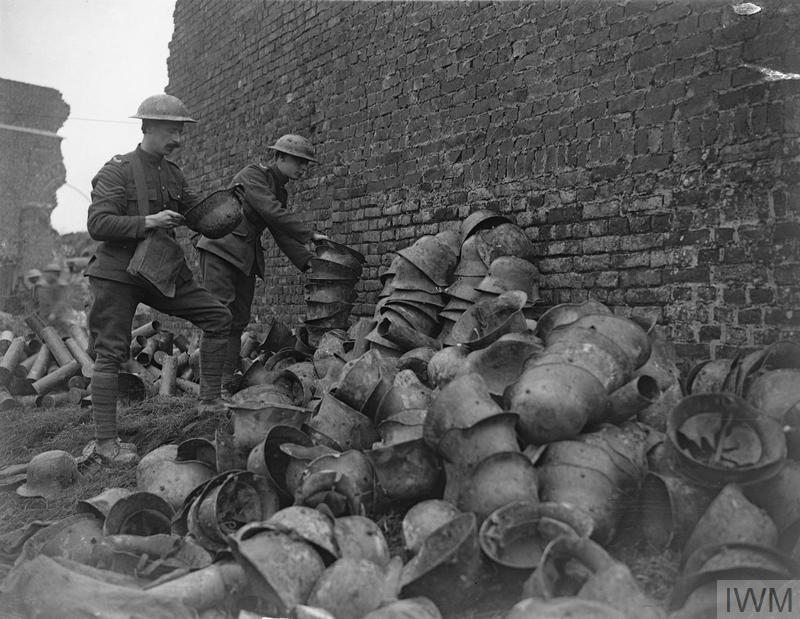 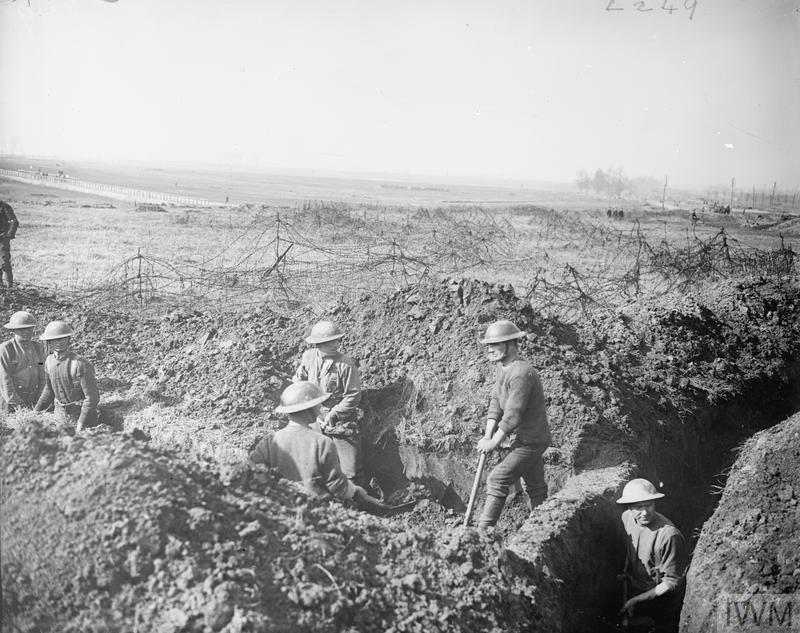