Yes the title is small

But its meaning is larger than you will ever know

World War One seriously under strength

What can be done to bolster these figures?

This was later to become known

As Kitchener’s Boys started in Liverpool

But it soon caught on, as is said simple Ideas are the best

Recruitment started from all walks of life

Where ever a group of Pals existed

Working men’s clubs: on the sports field too

Miners; Farmers there staff too, the Manor house grand

All answered the call, Villages and towns across this land

With a promise! Pals: Buddies: Mates and Colleagues too

Erie silence fell across this land

As Mothers Aunties Sister Daughters too

Were left to support this land fearful in knowledge

As vast numbers swelled, there ranks

They joined the British Expeditionary Force

In France and Belgium to fight and die

Or better known as Pals Battalions, One two and three

Men of the Royal Sussex Regiment

Who would pay dearly with their lives?

A real introduction to fighting from the trenches

The day before the Battle of the Somme

A diversionary force to be! But unknown to them

Hours they fought with great distinction

As the front they had captured! Then the tide turned

Losses were great amongst the Pals

Bodies of their Pals recovered and wounded too

Under intense fire from the enemy made no difference

But paying the ultimate price! Their life

For his outstanding Acts of Bravery

So young people of today in this turbulent world of today

Whilst you play with your Hi Tech gadgets

Remember your family Ancestors with Pride

Dedicated to the Men of the Royal Sussex Regiment

Who fought at Richebourg 30th June 1916?
​
The Battle of Boars Head 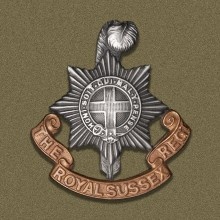