A poem written by Alan Brown in memory of the 36th Ulster Division R.I.R. and in particular in honour of his Grandfather (below) who fought with them.​ 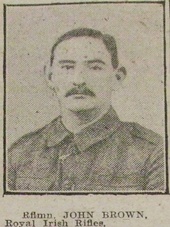 This year I’ll march in the Somme Day Parade

To remember those men of old.

They left these lands, and their families and homes.

To fight in the mire and the cold.


They left all their jobs with hammers and pens.

And went off with bayonet and gun.

To fight against a man they knew nothing about.

Kaiser Wilhelm and his German Hun.

Went off to the fighting in France.

And when they were told to go “over the top”.

The casualties ne’er stood a chance.


They fought for a cause that is noble and true.

Even after all these years.

They fought for what’s right. And for Liberty.

They died in their blood sweat and tears.


And so as I march with my medals worn proud.

I’ll keep in step with the drum.

With my heart soaring high and a lump in my throat

I’ll remember where those men came from.


They came from the very same streets we came from.

They walked the very same lanes.

They went to the very same churches and pubs.

They sang the same songs and refrains.


So, when I walk these roads to remember these folk.

(For, my Granda was one of these men).