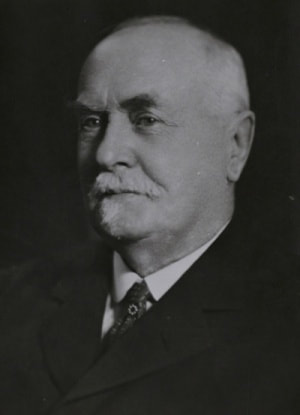 Sir Reginald Blomfield was born at Bow vicarage in Devon, where his father, the Rev. George John Blomfield was curate. His mother, Isabella, was a distant cousin of his father and the second daughter of the Rt. Rev. Charles Blomfield, Bishop of London. He was brought up in Kent, where his father became rector of Dartford in 1857 and then of Aldington in 1868. He was educated at Haileybury school in Hertfordshire and at Exeter College, Oxford, where he took a first-class degree in classics.

After Oxford, he spent a year travelling on the continent as a tutor before accepting an offer from his mother's brother, Sir Arthur Blomfield, to become an articled pupil in his London practice in the autumn of 1881. He also enrolled in the Royal Academy Schools, where R. Phene Spiers was Master of the Architectural School. He found the atmosphere in his uncle's office uncongenial and the practice's traditional Gothic Revival output hard and soulless, although he gained valuable mechanical skills at draughtsmanship and site experience

At the beginning of 1884, having completed his training, he left his uncle's office and spent a further four months travelling in France and Spain before returning to London and establishing a practice at 17 Southampton Street, in London; E.S. Prior had an office in the same building. Through Prior, a former pupil of Richard Norman Shaw, Blomfield met others of Shaw's circle, including Mervyn Macartney, Ernest Newton and Gerald Horsley. Although he never worked in Shaw's office, Blomfield was, like them, henceforth a great admirer of Shaw. With this ground, Blomfield was involved in the founding of the Art Workers Guild and was at first made its Honorary Secretary, but he attended infrequently and when admonished about this, resigned in a huff. In retrospect, however, he paid tribute to these efforts to set a new direction for architecture: "I think it is due to these young men of the 80s that the arts were rescued from the paralysing conventions of the Victorian era". In 1890, with the idea of designing and making fine furniture, Blomfield, Ernest Gimson, Macartney and William Lethaby joined forces to establish Kenton & Co. Although the venture had the makings of a success, it lasted only two years, as the partners decided to concentrate instead on their increasingly successful architectural practices.

In 1886 Blomfield married the daughter of Henry Burra of Rye, Sussex, where he designed several houses, including his own, the very informal Point Hill, Playden, where his family still live. One he let to the American novelist Henry James. The same year, Blomfield and the printer T. J. Cobden Sanderson (1840–1922) built themselves a pair of pretty houses in Frognal, Hampstead, Middlesex; 51 Frognal remained Blomfield's London home and he died there.The heyday of Blomfield's practice, between 1885 and 1914, was dominated by the construction of new country houses and the renovation and extension of existing ones on the most generous scale. Notable among these works are the alteration of Chequers, Buckinghamshire (mostly 1909-12), Heathfield Park, Sussex (1896–1910) and Brocklesby Park, Lincolnshire (1898–1910). The completely new buildings are mostly slightly smaller but still substantial; houses such as Wittington at Medmenham, Buckinghamshire; Caythorpe Court, Lincolnshire; Moundsmere Manor. Hampshire; or Wretham Hall, Norfolk. Much of this work was carried out in a manner inspired by Blomfield's studies of both English and French Renaissance styles. Blomfield's fairly numerous university and commercial buildings also included a number of prestigious commissions, including the college buildings for Lady Margaret Hall, Oxford and the United Universities Club in London. He played a major part in the completion of the Quadrant in Regent Street, London when Richard Norman Shaw withdrew from the project.

In 1918 he was appointed one of the Principal Architects of the Imperial War Graves Commission and for the next nine years was heavily involved with the design of their cemeteries behind the Western Front. He designed the Cross of Sacrifice which stands in most of the Commission's cemeteries. He collaborated with Sir Aston Webb and Sir W. Hamo Thornycroft in designing several war memorials for London. They were forbidden use of the Royal Parks, which explains the considerable number of war memorials on Victoria Embankment. He designed the Royal Air Force Memorial on the Embankment, the municipal memorials at Leeds, Luton and Torquay and the Memorial Chapel at Oundle School.
He was later appointed to the memorials committee convened by Sir Alfred Mond, First Commissioner of Works. In 1919 he was sent by the War Office to Ypres to design a memorial intended initially to take 40,000 names of those who had no known grave. Having chosen the site of the Menin Gate he then designed the magnificent memorial that was to be the best known work of his career. The construction of the Menin Gate Memorial (pictured left) was not without it’s problems, but he along with the help of the respected engineer Sir Maurice Fitzmaurice managed to overcome the problems and create one of the worlds finest monuments. The completion of the memorial ended his time with the Commission. In December 1927, Sir Fabian Ware wrote to him: 'I think you will understand it, when I say that everybody working had wished, looking back on the past years, to send you a special message of gratitude for the great work that you have done for the Commission…. We are all deeply grateful to you, and very proud to have been associated with you'.
​
The First World War put an end to the type of building projects on which he had been engaged, and after it ended in 1919 his practice never returned to its former size. He was 65 in 1921, but continued working at a gradually decreasing pace into his late 70s, producing a large number of war memorials and cemeteries in the 1920s, as well as the Menin Gate other of his creations included Bouzincourt Ridge Cemetery, Dozinghem Military Cemetery and Forceville Communal Cemetery and Extension: one of the first three CWGC sites to be built after the war. His last major project was the reconstruction of 4 Carlton Gardens, London, in 1932.

Information above by wikipedia