From the centre of Gothenburg head from the North East section of the city and pick up the sign for Gamelstaden then, subsequently, Kortedala. Follow this direction until a large roundabout is reached (junction of Kortedalavägen and Regementsgatan) with a petrol station on the right. The cemetery is directly opposite this.

In this very large cemetery the Commission plot (referred to as Engelska Krigsgrave) is marked with a red square on the cemetery plans at the entrance and close to the administrative buildings. From the entrance take the central avenue to the T junction, turn right and continue to the end of the road. Turn left and follow the road which winds upwards towards the rear of the cemetery. The plot is on rising ground close to the crematorium and can be seen from some distance.

Although Sweden remained neutral throughout both world wars, a number of Commonwealth servicemen lie buried in her cemeteries and churchyards.

Most of the First World War burials are of Naval casualties from the Battle of Jutland in 1916, or from the hired drifter 'Catspaw', wrecked on the south-east coast in December 1919. The Second World War graves are mostly those of airmen who failed to return from bombing raids over Germany or German occupied territories.

Many casualties of both wars were buried in isolated and inaccessible locations and in 1961, the Gothenburg Church Commission made land available for a war graves plot in Kviberg Cemetery, which allowed these graves to be relocated. Three further burials were made in the plot in 1976, when a crashed aircraft, buried in snow in Lapland since 1942 was discovered during a thaw.

The Commonwealth plot in Kviberg Cemetery now contains 68 burials of the First World War, 30 of which are unidentified. Second World War burials number 46, 11 of them unidentified. 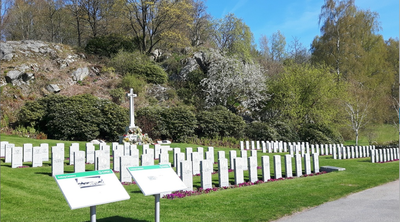 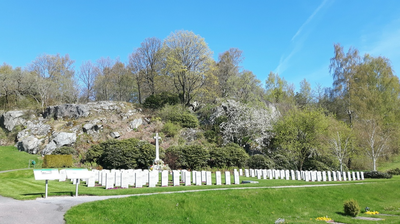 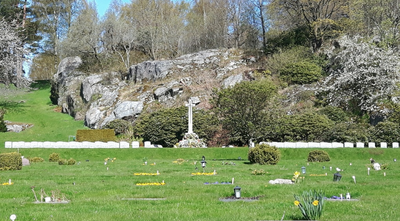 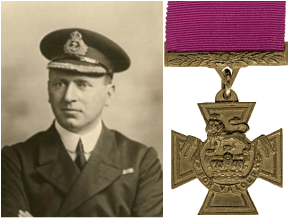 Citation: An extract from "The London Gazette" dated 6th March 1917, records the following:- "On the afternoon of the 31st May, 1916, during the action, Commander Jones in H.M.S. "Shark", Torpedo Boat Destroyer, led a division of Destroyers to attack the enemy Battle Cruiser Squadron. In the course of this attack a shell hit the "Shark's" bridge, putting the steering gear out of order, and very shortly afterwards another shell disabled the main engines, leaving the vessel helpless. The Commanding Officer of another Destroyer, seeing the "Shark's" plight, came between her and the enemy and offered assistance, but was warned by Commander Jones not to run the risk of being almost certainly sunk in trying to help him. Commander Jones, though wounded in the leg, went aft to help connect and man the after wheel. Meanwhile the forecastle gun with its crew had been blown away, and the same fate soon afterwards befell the after gun and crew. Commander Jones then went to the midship and the only remaining gun, and personally assisted in keeping it in action. All this time the "Shark" was subjected to very heavy fire from enemy light cruisers and destroyers at short range. The gun's crew of the midship gun was reduced to three, of whom an Able Seaman was soon badly wounded in the leg. A few minutes later Commander Jones was hit by a shell, which took off his leg above the knee, but he continued to give orders to his gun's crew, while a Chief Stoker improvised a tourniquet round his thigh. Noticing that the Ensign was not properly hoisted, he gave orders for another to be hoisted. Soon afterwards, seeing that the ship could not survive much longer, and as a German Destroyer was closing, he gave orders for the surviving members of the crew to put on lifebelts. Almost immediately after this order had been given, the "Shark" was struck by a torpedo and sank. Commander Jones was unfortunately not amongst the few survivors from the "Shark" who were picked up by a neutral vessel in the night."