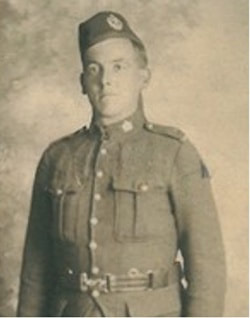 
The information below supplied by 'The Ellesmerian Club', the alumni organisation for Ellesmere College where George was a pupil.

George Ewens grew up in a very female orientated household - he and his two half brothers, Charles and Thomas, had eight sisters. A great deal of misfortune affected the family very early on in their lives. Thomas Ewens married his first wife, Eda in 1873 and they went on to have nine children but she died shortly after giving birth to the twins, Evelyn and Elsie in 1886. Thomas, a well-known member of the community in Collumpton, Devon where he combined the trades of tanner, fellmonger and surveyor, was left with nine children to bring up, the eldest being only twelve years old.

However, on 31st March 1887, he re-married Eleanor Maria Waugh in a ceremony at St. Helier’s Church, Jersey. They set up home together back in Devon and their first child, Eleanor, was born a year later. Their son, George, was born on 26th February 1890 in Dublin but then tragedy struck again and Thomas died after a three week illness on 27th June.

As such, George never knew his father and it is probably not surprising, therefore, to discover that for much of his life he was known by his mother’s maiden name of Waugh.

Exactly what the family circumstances were following the father’s death, we have not been able to discover but when George arrived at Ellesmere College his previous school was recorded in the Headmaster’s Register as being “Ecole Industrielle, Lausanne’. He was educated there for two terms prior to his arrival at Ellesmere in January 1903, along with nineteen other new boys. George was allocated to the ‘Alfred’ dormitory but there is almost no reference to his time at the college in any of the records available. His mother gave a correspondence address at the time of his entry to Ellesmere as ‘Carleon House, Aberystwyth’.

George was allocated to Form Upper III under the instruction of Mr. Fyffe, himself an Old Ellesmerian and, in a letter from his sister that is held at the college, we learn that he was a member of the choir and sang solo at the 1903 Speech Day Chapel Service. In the letter she mentions that his career at Ellesmere was cut short due to his suffering an injury whilst playing cricket. After only three terms, George left Ellesmere.

Seven years later, the 1911 Census of Canada records he was single and lived at Portage La Prairie, Manitoba where he was employed as a farm labourer by a Samuel Crabbe.  He had disembarked the ss Lake Erie at St. John, New Brunswick on 13th March 1910.

George signed his Attestation Papers at Winnipeg on 18th December 1914 and enlisted with the Canadian Overseas Expeditionary Force. He declared that he was single, employed as a clerk and had no previous military experience. He also gave his surname as ‘Waugh’ causing some confusion for the Canadian administration.

Private Waugh, Service No: 420975 underwent his basic training and embarked on ss Grampian at Montreal on 1st June 1915 for the voyage to England. Ten days later he arrived and transferred to the vast Canadian Base Camp at Shorncliffe where his training would have continued. His service records reveal he was ‘absent’ on 2nd August – this cost him one day’s pay and two days Field Punishment No. 2.

On 20th February 1916, he embarked for another sea voyage – this time his destination was France with the 43rd Battalion, Manitoba Regiment, the Cameron Highlanders of Canada. This was an infantry battalion of the Canadian Expeditionary Force that fought as part of the 9th Infantry Brigade, 3rd Canadian Division in France and Flanders until the end of the war. During George’s time with the unit, they saw action at Mount Sorrel, the Somme and Flers-Courcellette.

On 5th July George was admitted to No. 50 Casualty Clearing Station for treatment to an injury to his left leg. He had been working on the ‘Warrington Avenue’ trenches in the Sanctuary wood sector when he had caught his leg on a piece of protruding revetting. This was initially described as a ‘slight wound’ which would not impede his ability to undertake his military duty but the next day he was admitted to No. 30 General Hospital at Calais as the leg had stiffened, probably due to the spread of infection.

In those days there was no anti-biotic medication available, those serving on the front line were living in very basic conditions and they suffered great depravations, lack of nourishment etc.

One officer described the area in mid-1916 thus: “Sanctuary Wood was by this time a wood in name only. Such trees that stood were riven and leafless, whilst their fallen branches added to the maze of wire and trenches beneath. The air was heavy with the sickening odour of decay, so that the whole battered district, even by day, was a place of grisly horror and evil omen”.

George was treated in hospital for ten days and then discharged to No. 1 Convalescent Depot at Boulogne prior to his return to his unit.

Two weeks later a second entry is made on his conduct sheet. This time he was found in a state of drunkenness and in possession of a bottle of liquor – this cost him the loss of fourteen day’s pay.

How and exactly where George died is not recorded but it is likely that his death occurred during action at Flers-Courcellette.

He was declared dead on 21st September 1916 and his death is recorded on the Vimy Memorial and on Cullompton War Memorial, Devon.

The information below supplied by 'The Ellesmerian Club', the alumni organisation for Ellesmere College where Herbert was a pupil.
​
Herbert Hale Fletcher, the eldest son of Septimus, a grocer, and his wife Mary, was born on 23rd December 1870 in Cardiff, South Wales. He was baptised on the 24th January 1871 when the family were resident at 23, St. Mary Street, Cardiff. Little did anyone in the family realise then that some thirteen years later Herbert would be one of the original ‘Aborigines’ who entered Ellesmere College on 8th September 1884 – the day it opened for business. Seventy six boys arrived that day ready to make history in their own way.

The records of the time are sparse. He entered Form II and was allocated to the ‘Alfred’ dormitory which was to be his home for the next two years. The Ellesmerian (August 1885), reported on the comments made by the School Inspectorate which record that Herbert impressed them with his efforts. He played cricket and rugby for his dormitory team – at this stage in the college’s development it had not organised any formal matches between other schools or local teams.

Herbert left the college on 5th August 1886. It is not known if he went onto any form of further education but it is highly probable that he returned home to work in his father’s grocery business.

In 1894, his father died and it is likely that Herbert then took over running the business totally. The 1901 Census records him as a ‘Grocer’ and resident at Llandaff Road, Cardiff – the same census also shows that he had married Elizabeth May Needham the previous year (on 31st January). Their son, Herbert Needham Fletcher, was born on 26th April 1902 and he was to attend Ellesmere as a boy from September 1916, following in his father’s footsteps – one of the very first second generation Ellesmerians.

Sadly, this was something his father never got to see as, by then, he was fighting with the 2nd Battalion, the Canadian Mounted Rifles and he was presumed to have been killed in action on 30th September.

Herbert is recorded in the 1911 Census as running the family grocery business but it would appear that he may have been considering a move to Canada for quite a while as he made two prior trips there in 1905 and 1906.

The family moved to Canada after the 1911 Census and Herbert established himself as a grocer.

However, just four and a half years later the family faced total upheaval yet again. Herbert’s family returned to Cardiff whilst, on 28th September 1915, he enlisted in the Canadian Expeditionary Force at Vernon, British Columbia. He was 41 years old – or so he would have had the military believe as he declared his year of birth to be 1875. In fact, he was 46 years old.

He was embodied to the 62nd (Overseas) Battalion, the Canadian Expeditionary Force on 7th October as Private Fletcher, Service No: 464398. On his Attestation Papers he indicated that he had previously served with the Duke of Cambridge’s Own Regiment for one year but it has not been possible to discover any further information.

On 1st April 1916 Herbert embarked at Halifax for the voyage to England and some seven weeks later, on 25thMay, he was boarding another troop-ship for the shorter sea crossing to France. At the time of his embarkation he was transferred to the 2nd Battalion, the Canadian Mounted Rifles and he also reverted to the ranks. This ‘demotion’ was not in any way connected with poor performance or as a result of any disciplinary action – the unit he has been posted to simply had sufficient Lance-Corporals already in post.

Herbert’s unit soon saw active service and on 3rd June he suffered a gun-shot wound to his face. This was described in his service records as being ‘slight’. He received immediate treatment at No. 17 Casualty Clearing Station before being transferred to No. 18 General Hospital at Camiers and thence on to a convalescent depot at Etaples. By August he was back on active service with the 3rd Entrenching Battalion which was organised at the Canadian Base Depot, Le Havre in July 1916 under the command of Lieutenant-Colonel A. K. Hobbins. The men in these units were trained as infantry battalions but they also provided working parties that could undertake Royal Engineer work, trench repairs, wiring, road making, burial parties, battlefield clearance etc.

Such work was not without its dangers for the men involved and Herbert’s military service records conclude that, having initially been reported ‘missing’, he was to be presumed dead as of 30th September. There are no details available as to exactly where he was working or posted to at the time of his death but one record indicates he died in or near the trenches at Courcelette.

His sacrifice is commemorated on the Vimy Memorial, Pas – de – Calais.