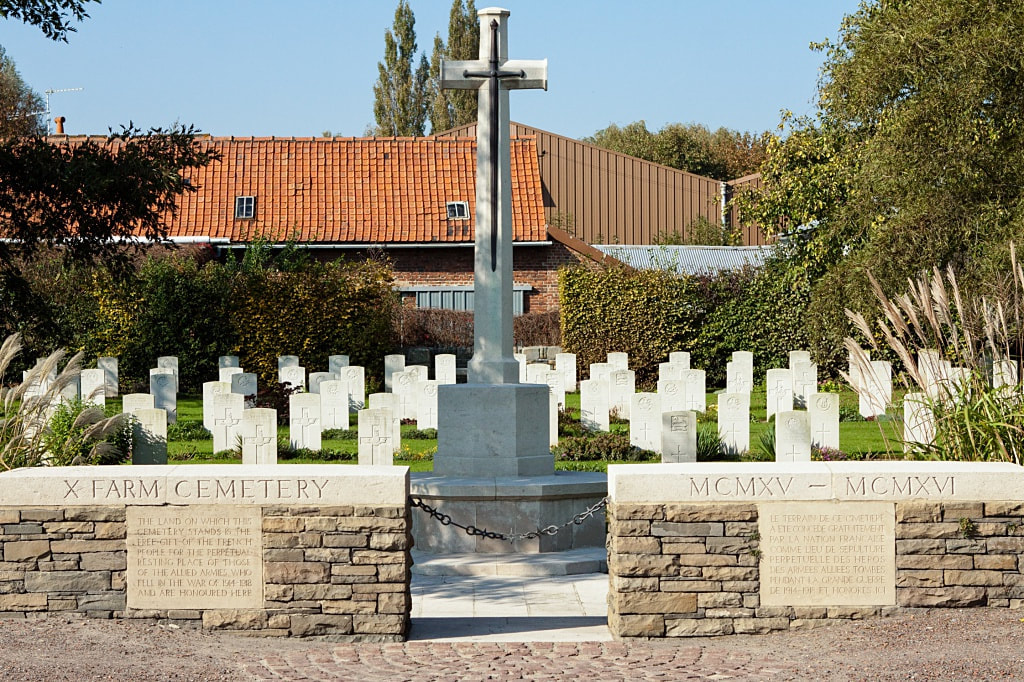 "X" Farm Cemetery is approximately 1 kilometre south of the village on the Avenue Président Kennedy, west of the road to Bois-Grenier, between the road and the site of a farm.

La Chapelle-d'Armentieres was in British hands from October 1914 until the fall of Armentieres on 10 April 1918, and it was retaken in the following October. During the British occupation it was very close to the front line, and the cemeteries which it contains are those made by fighting units and Field Ambulances in the earlier days of trench warfare.

"X" Farm Cemetery was begun in April 1915 and used until June 1916, and it was sometimes called "Wine Avenue". It was intended to take the place to Desplanque Farm Cemetery.

The Cemetery covers an area of 1,065 square metres and is enclosed by a low rubble wall. 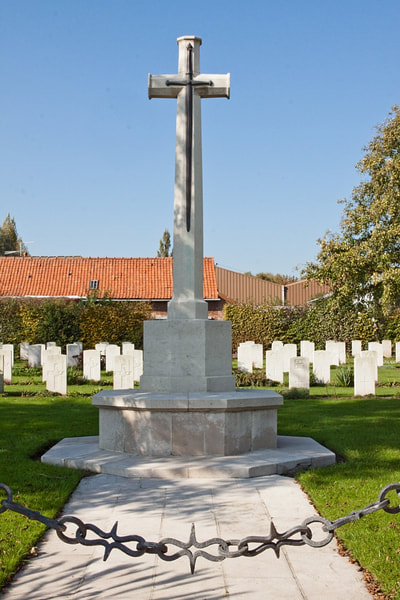 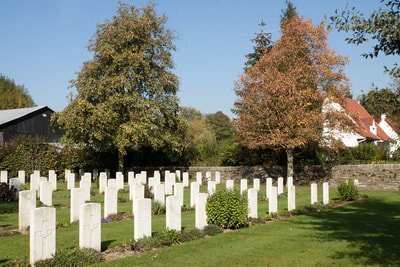 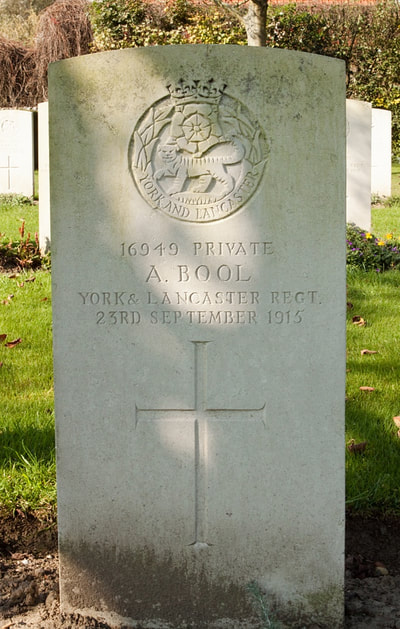 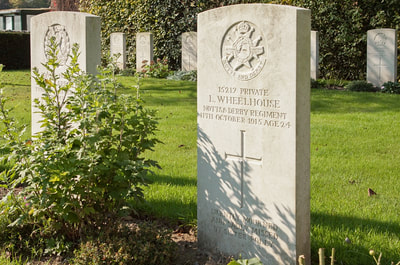 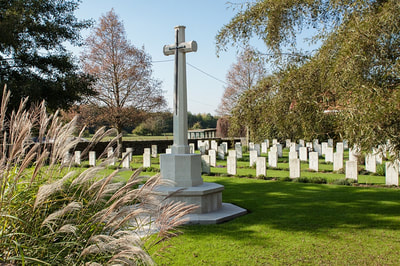 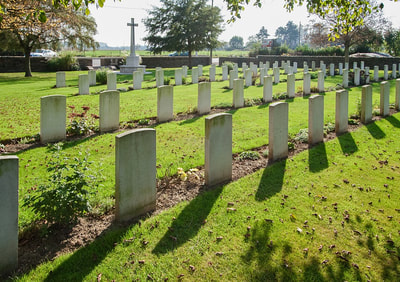 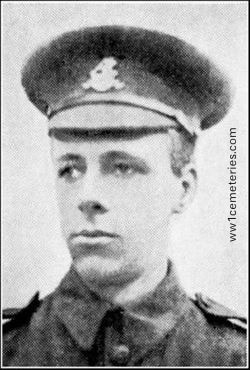 His headstone bears the inscription "He Fought The Good Fight" 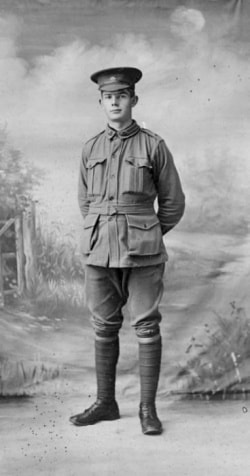 Studio portrait of 2125 Private (Pte) John Blackler Brooks, 27th Battalion, of Tarlee, SA. With three years service in senior cadets and one year with the 79th Infantry, Citizens Military Forces (CMF), Pte Brooks was employed as a clerk with the National Bank of Australia before he enlisted in in the AIF in June 1915. He left Australia for Egypt with the 4th Reinforcements in September 1915, and was transferred to the Western Front four months later. Pte Brooks was killed in action whilst manning a front line trench in the Bridoux Salient near Bois Grenier on 30 May 1916, age 20. 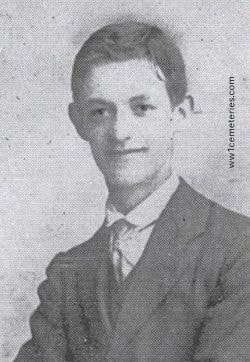 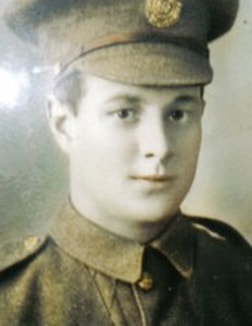 
Edward George Crowter, was born at 2 Lowther Road `"Holm Lea", Kingston Upon Thames, Surrey on the 11th May 1896. The son of Edward Evelyn Crowter and Lilly Eliza Crowter (nee Crumpter), he had a younger brother Wilfred C Crowter. Edward was educated at Richmond Road School and for many years was a member of The Church of the Good Sheppard Choir, he was also well known in St. Luke’s Parish. He was also one of the original members of Kingston United Football Club, playing in defence. Having left school he worked as a sign painter in Kingston. At some point he moved along with his parents and brother to 78 Deacon Road, Kingston.

On the 25th January 1915 aged 18 years and 9 months he joined the army, at Lochabur Street, London. He enlisted in the Royal Engineers and was given the Regimental number 65323. His service papers give the following details. Height 5` 8.5”, weight 139Lbs, chest 34”. He had good physical development and brown hair and brown eyes. His vision was 6/6 in both eyes. On the 2nd February he began his training at the Army School of Engineering, Chatham, Kent. Further training at Rye, Bordon Camp, Henley Upon Thames, his employment was as a painter.

On the 27th August 1915, he embarked with 128 Field Company Royal Engineers (23rd Div) for France, from Southampton. Arriving on the 28th, at Le Havre. The Division concentrated in the Tilques area near St Omer. On the 7th Sept, they moved to Bailleul. The next day saw the Company employed in trench construction. On the 14th September they moved to Rue Marle near Armentieres. The unit war diary gives the following account, for the 23rd November 1915. Enemy very quiet, his artillery action was confined to the occasional bombardments. Weather bitterly cold. 27th November: Unit employed in front line underpinning front parapet. One Sapper killed and one wounded. Edward being killed and a Sapper called Brett, being wounded. Edward was killed in Wine Ave, a communication trench leading to the front line. I have not been able to ascertain his exact cause of death, but feel sure that it was either a shell that killed him, and wounded Brett, or maybe a sniper. As the next trench along, which runs parallel with Wine Ave (Wellington Ave), saw a Sapper called King being killed by a sniper. Edward is buried in X Farm Cemetery, Armentieres. Which is very close to were Wine Ave would have been. One of Edward’s Officers had the following to say about him, when writing to his parents. “I had only just taken command of this section, but at once recognised Edward’s good soldiering qualities”. Edward served just 307 days in the army and only 91 in France. He is commemorated on the Kingston Cenotaph and in St. Luke’s Church, just round the corner from his home, on Deacon road. I have no idea of what happened to Edward’s medals or personnel effects, which were sent home to his parents. But I do know the location of his Memorial Scroll and a large framed portrait of him, both of which were rescued from a SKIP!!! I just hope that his medals didn’t meet a similar fate!! I think you’ll agree, the saving of these two items is a happy ending to a sad story. His picture and scroll, now hang on a wall in my home. I never knew Edward or his family, but feel they would be happy in the fact that his sacrifice has not been forgotten, and someone cares, even after all these years!! I put forward Edward’s name be read out on the anniversary of his death, at the services which were carried out everyday in 2001 at the Menin Gate, Belgium, and am pleased to say that my wish was carried out by the Last Post Committee Association, on the 27th November, 86 years after his death. 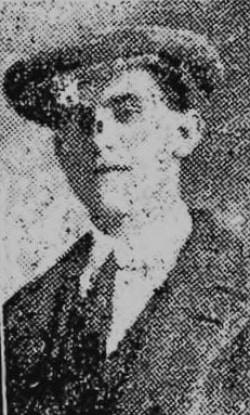 His headstone bears the inscription "He Died A British Hero" 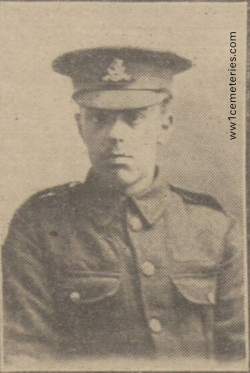 His headstone bears the inscription "Ever In Our Thoughts" 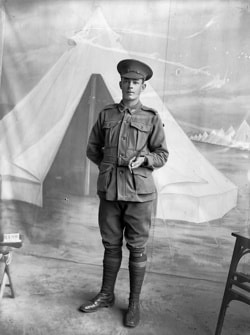 His headstone bears the inscription "And There Shall Be No Night There" Rev. 22. CH. 5th Ver"

Studio portrait probably of 985 Private (Pte) Harold Charles Jennings, 24th Battalion from Oakleigh, Victoria. He was an 18 year old clerk when he enlisted in the AIF on 31 March 1915 and embarked for overseas with D Company from Melbourne on 10 May 1915 aboard HMAT Euripides. After serving at Gallipoli, he went on to serve on the Western Front where he died of wounds on 24 June 1916. 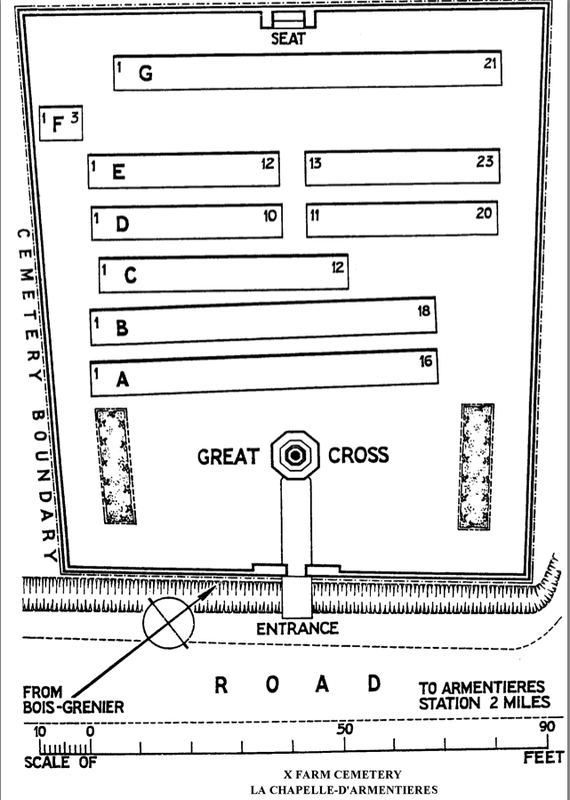 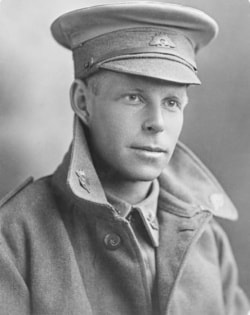 His headstone bears the inscription "His Desire Was Duty To His Country Faithful To The End"
​
Portrait of No 3239, Private Frederick Rae McPhie (from Lameroo, SA) of the 27th Battalion, AIF. He was killed in action at Armentieres, France, on 31st May 1916. 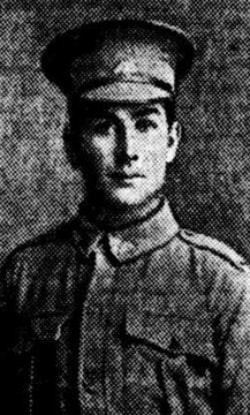 His headstone bears the inscription "In Remembrance Of Gil. Beloved Son Of M. And A. Munday A Noble Sacrifice" 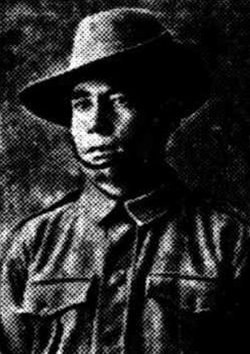 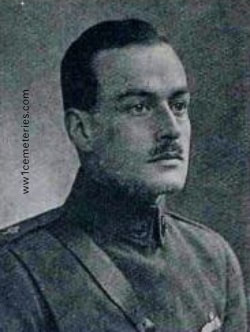 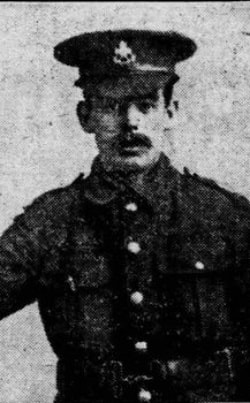 Son of Arthur and Catherine Wheelhouse, of Nottingham.