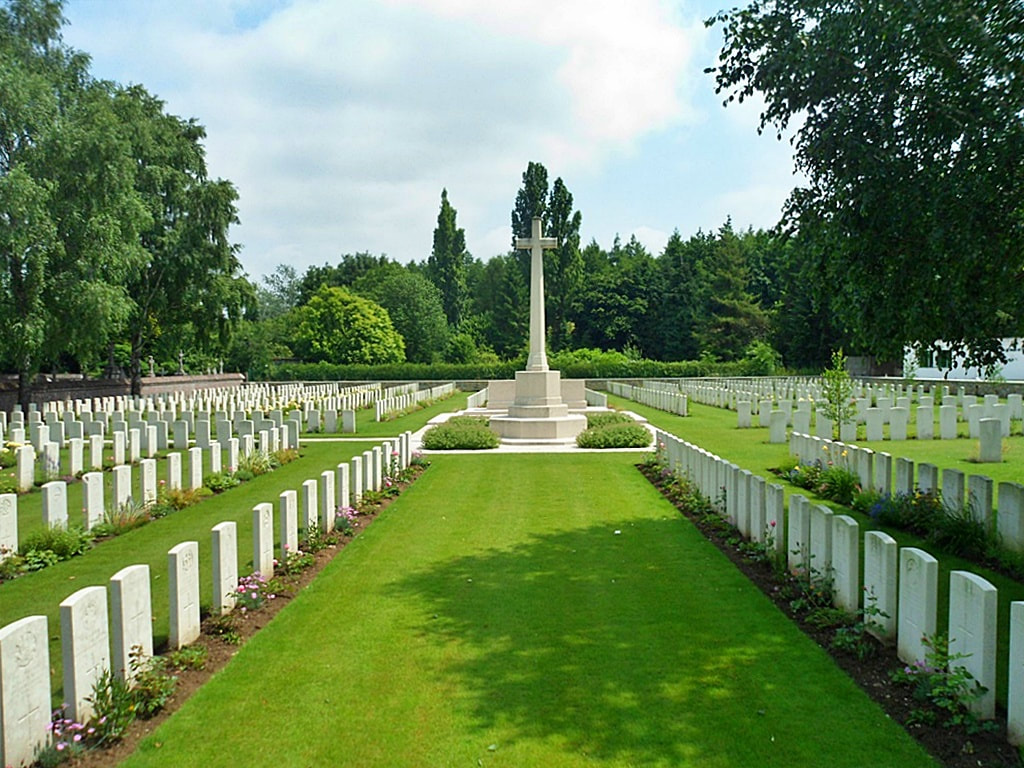 Bully is approximately 20 kilometres north of Arras. From Arras, take the D937 towards Bethune. At Sains-en-Gohelle, turn right onto the D166E towards Bully. At the first (Casimir Beugret) roundabout, turn right into the Rue Ferdinand Marche. The Cemetery (known locally as the 'Cimetiere de Bully-les-Mines') is 200 metres down this road on the right. The Commonwealth war graves plot is reached via 'Allee 8'.

Bully-Grenay is the name of the railway station (on the main Hazebrouck-Arras line) serving this village and Grenay, but the double name was generally applied to the village and the communal cemetery of Bully by the troops.

The FRENCH EXTENSION was made by French troops on the west side of the communal cemetery, and Commonwealth forces, who took their place in this part of the line in June 1915, buried in it until June 1916.

The BRITISH EXTENSION, on the south-west side of the communal cemetery, was begun at the end of April 1916, and was used until October. From April 1917 to March 1918, (Plot II, Row E to the last row of Plot IV), it was very largely an artillery burial ground. At the Armistice, Plot VI, Rows A-C, had been completed, and the cemetery contained 595 graves.

After the Armistice, Plots V (D-G), VI (C and D) and VII to IX were made when graves were brough in from isolated positions and small burial grounds on the battlefields east of Grenay. Three came from Grenay Churchyard, which had been damaged by shell fire and was closed. One came from the German Extension of Sallaumines Communal Cemetery.

There are now 803 Commonwealth burials and commemorations of the First World War in the British extension. 141 of the burials are unidentified and there are special memorials to two casualties known to have been buried at Sallaumines whose graves could not be found. The extension also contains one Second World War burial. 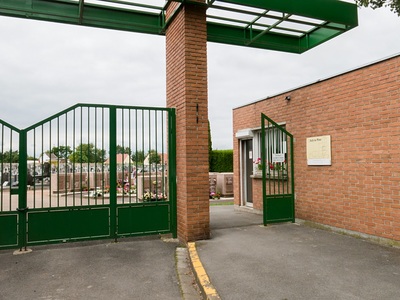 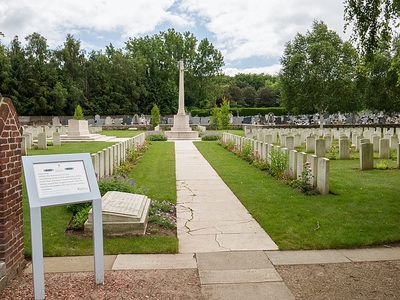 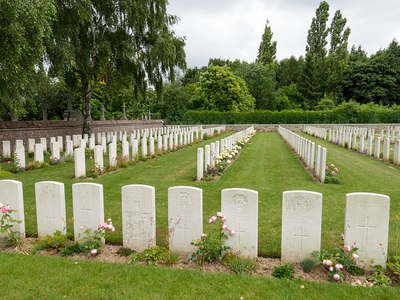 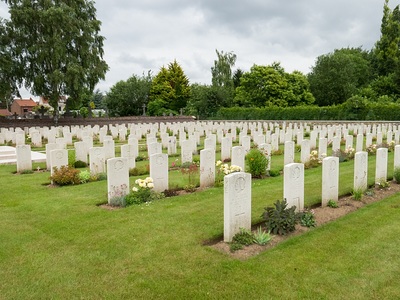 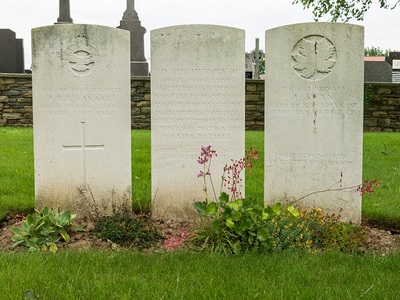 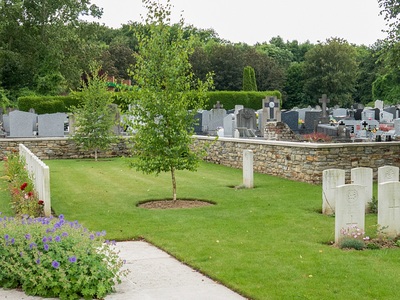 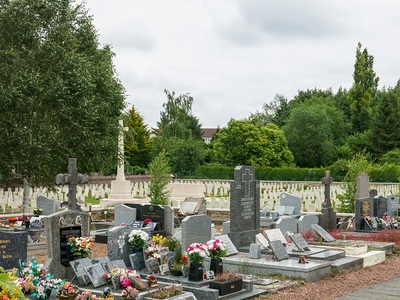 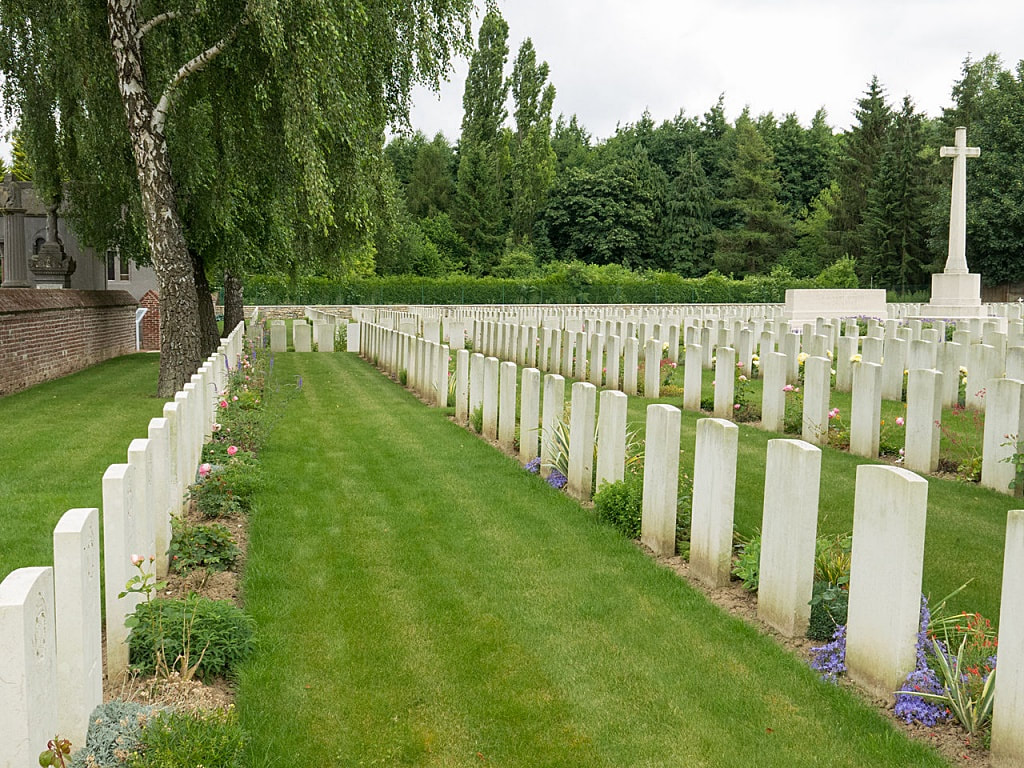 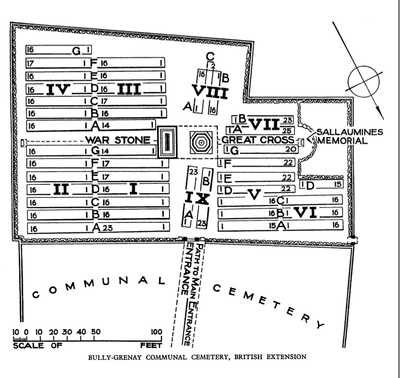 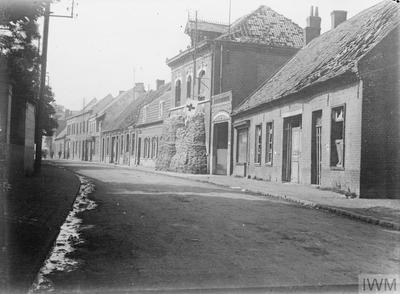 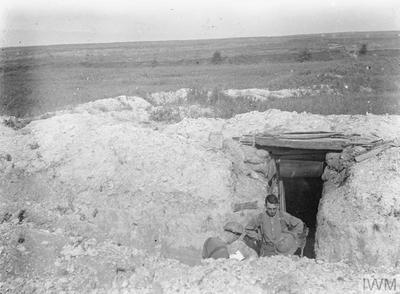 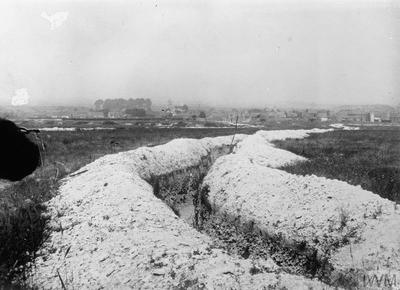 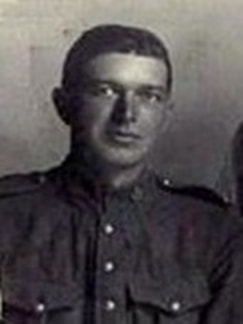 904821 Private
Albert Oscar Emil Alde
10th Bn. Canadian Infantry (Alberta Regiment)
20th July 1917, aged 31.
Plot III. C. 7.
​
Albert Alde, my great-great uncle, joined up on the 27th of March 1916, in Edmonton, Ontario. Albert was the son of German immigrants and family man, with a wife and daughters. As a private in the army, Albert was originally part of the 194th Battalion – the Edmonton Highlanders. Later, he became part of the 10th Battalion (Alberta Regiment) and was killed in action on July 20th 1917, in the Loos sector. 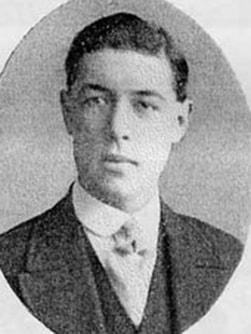 
Picture courtesy of Andrew Goff, great nephew of this soldier 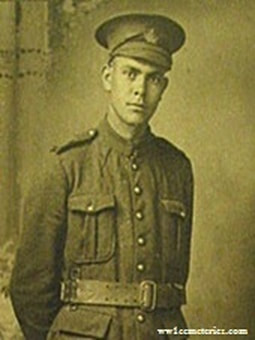 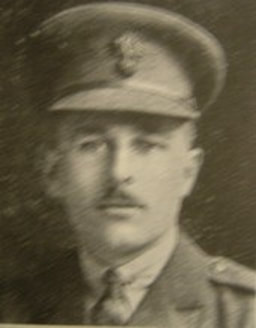 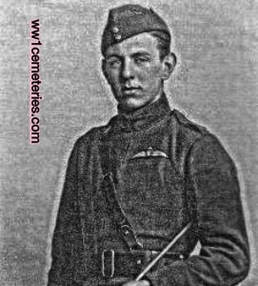 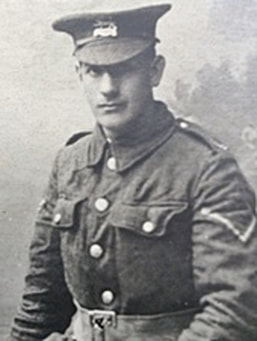 b. Stapenhill 1886. A shoe hand, resident of Earl Shilton. Son of John and Sarah Startin.
Killed by friendly fire.
​
"If ever a man did his duty it was your husband. He was always cheerful and cheering other men. He died like a true Englishman."

On 8 Mar 1918, at Bernes, Stevenson was found missing from roll-call & was next seen at Hallencourt on 29 Apr 1918, leading a 'civilian’ pony & alleging, when questioned, employment by the Town Major. Taken to the latter’s office, he ran away, but appeared later, giving his name & regiment, but being without ID disc or pay-book, was arrested.

On 3 May, he was sent under escort to Army HQ.  On 5 May, Stevenson was admitted to a Casualty Clearing Station, but disappeared — to be arrested on 8 May ‘loitering about’ in Saleux.

Stevenson — who was represented at trial — testified at length. In regard to 8 March, he was told that he was for leave, but this was cancelled within minutes which ‘worried me a bit as I had some trouble at home’. He just went for a walk: ‘I do not know what came over me for the moment but I went too far from my unit so I went on & got to Mons’. On 21 March he was sent up the line by police who were dealing with stragglers but did not report to anyone during his time in the trenches. He later tried to find his unit, but was afraid of  getting into trouble, so just loitered around till he was arrested. As for escaping from hospital, he said that he thought that he was free to go for a walk if he liked.

After conviction, he claimed to have had only one crime in the regiment ‘since which I have never had a chance’; & sought to prove himself as a soldier if transferred to another regiment.

Though at one stage after sentence a medical examination was proposed, no redeeming features were noted by any commander. (Corns, pp.351-353) 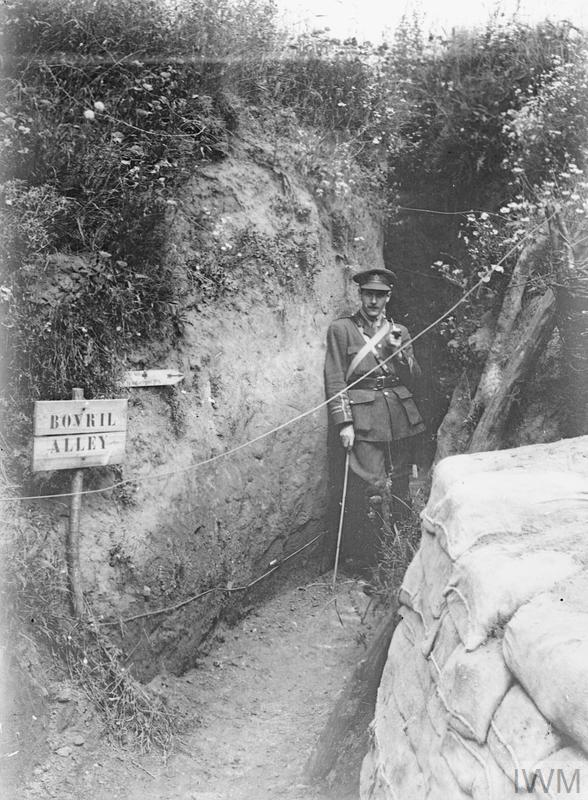 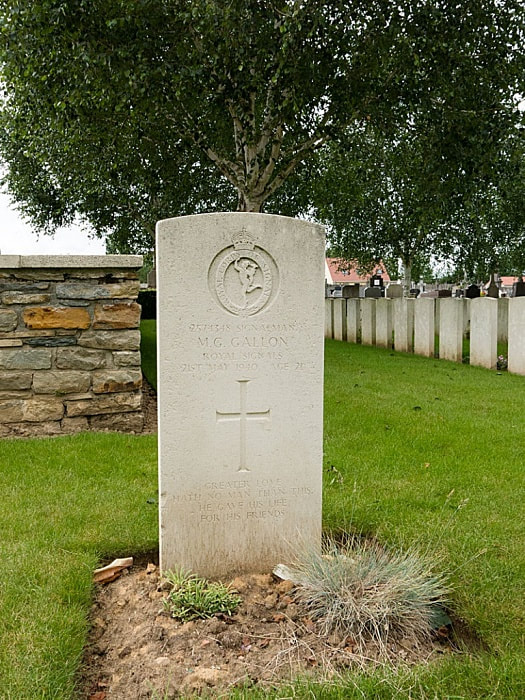 2574348 Signalman Matthew Greenwell Gallon, Royal Corps of Signals, died 21st May 1940, aged 21. Son of William and Isabella Gallon, of Philadelphia, Co. Durham. Plot 8. D. 1. His headstone bears the inscription "Greater Love Hath No Man Than This. He Gave his Life For His Friends"