Dury is a village in the Department of the Pas-de-Calais, 1 kilometre north of the straight main road (D939) from Arras to Cambrai. Approximately 16 kilometres from Arras travelling towards Cambrai on the D939 is the Canadian Forces Memorial at Dury. 300 metres after the Memorial the Cemetery is signposted to the left towards Dury village. It is located in open fields, and is approached along an unsurfaced track about 500 metres long.

In August, 1918, Dury was behind the German defence system known as the Drocourt-Queant line; but on the 2nd September this line was broken by the Canadian and XVII Corps, and Dury village and the hill just South of it (Mont Dury, or Dury Ridge) were captured. The Mill (Moulin Damiens) stood beside the road from Dury to Villers-les-Cagnicourt, and was destroyed.

The cemetery was begun by Canadian units on the 5th September, 1918, and closed sixteen days later.

There are now 337 First World War casualties buried in this cemetery. Of these14 are unidentified.

This cemetery was designed by Sir Edwin Lutyens 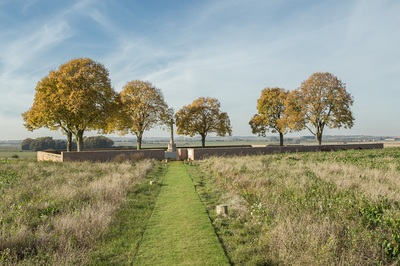 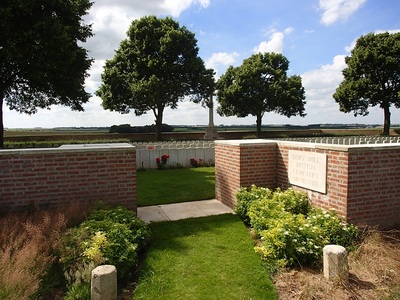 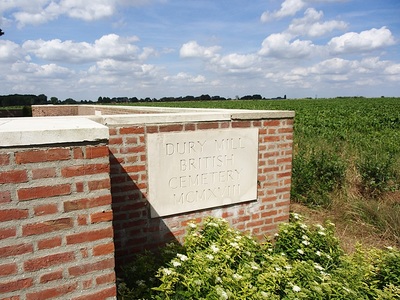 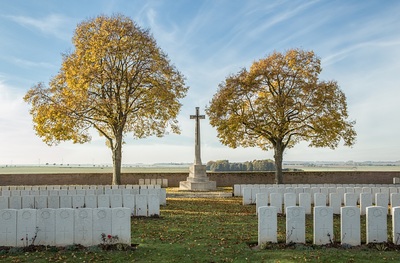 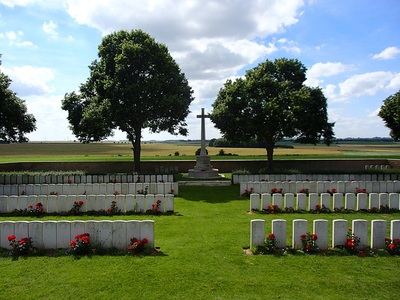 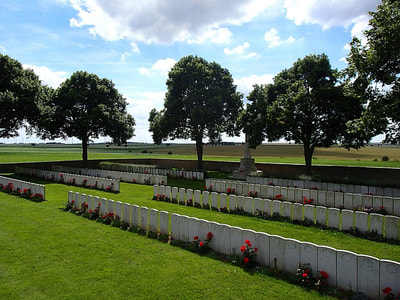 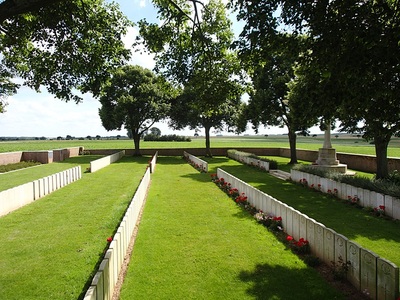 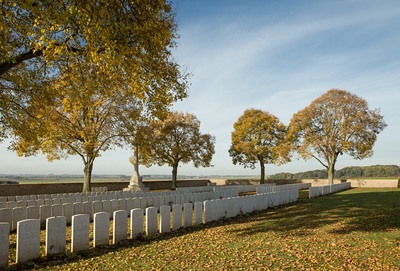 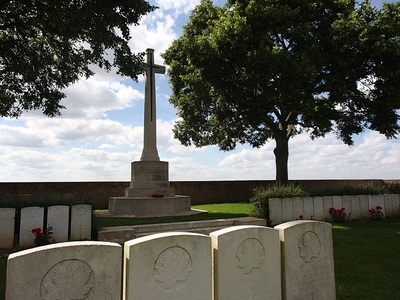 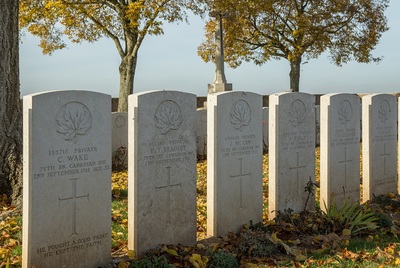 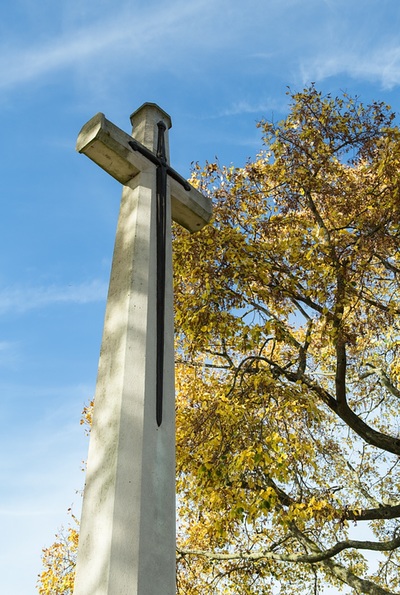 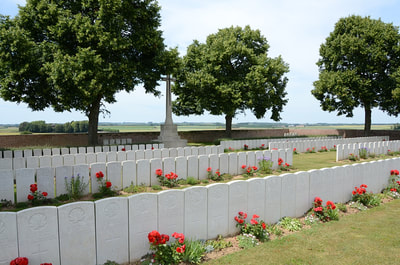 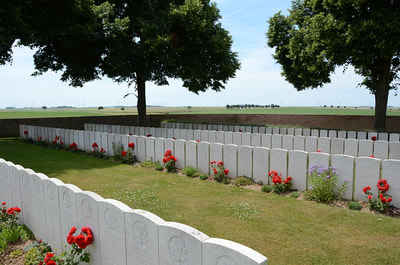 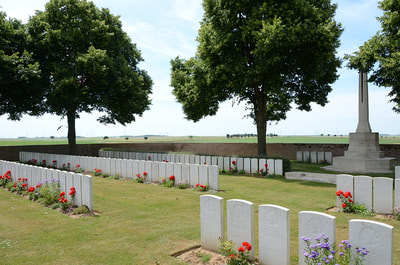 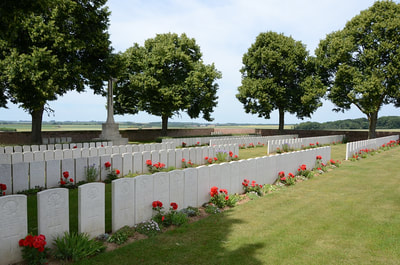 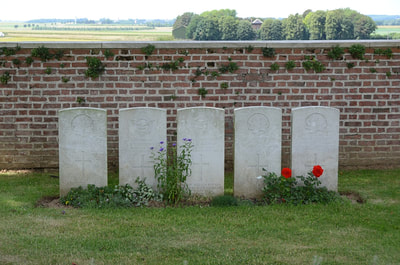 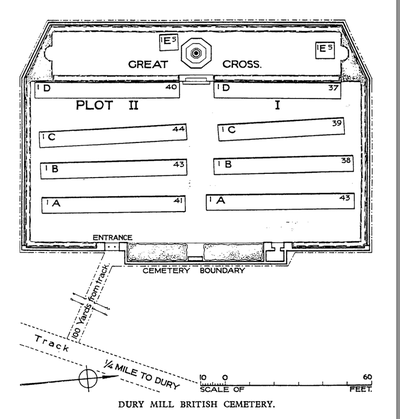 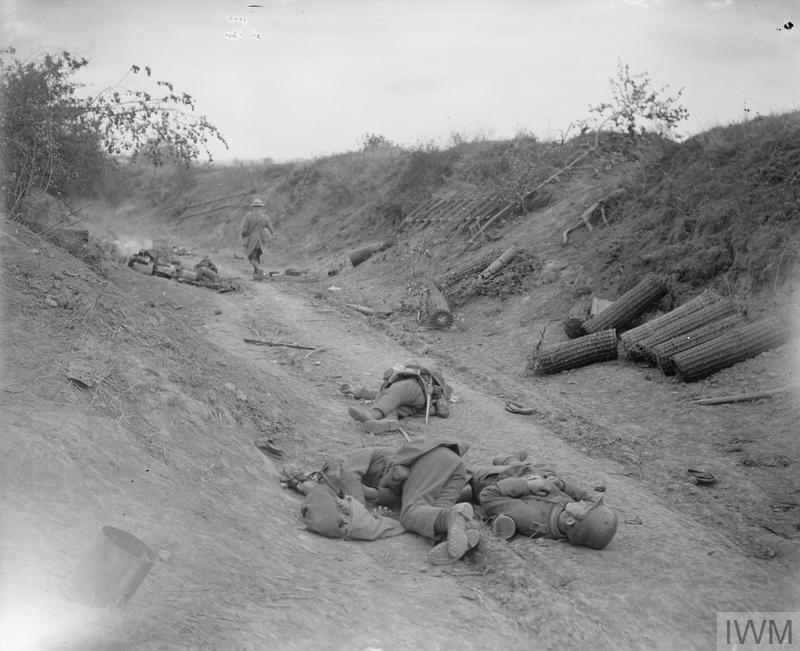 Battle of the Drocourt-Queant Line. Dead German soldiers in sunken road that was strongly held by machine guns but was taken by the 4th Division. Near Dury, 2 September 1918. © IWM (Q 7030) 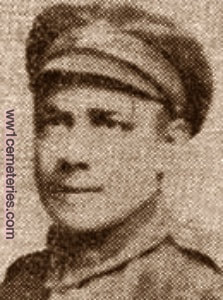 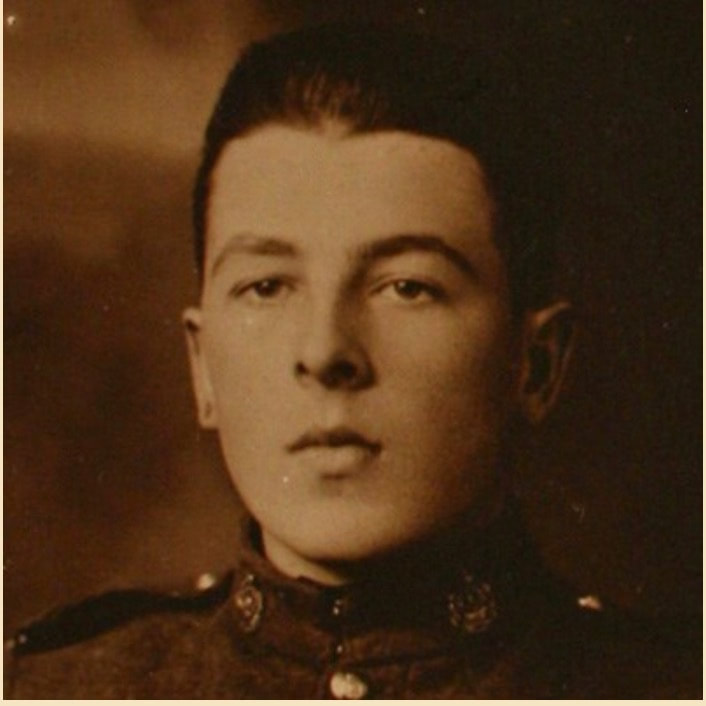 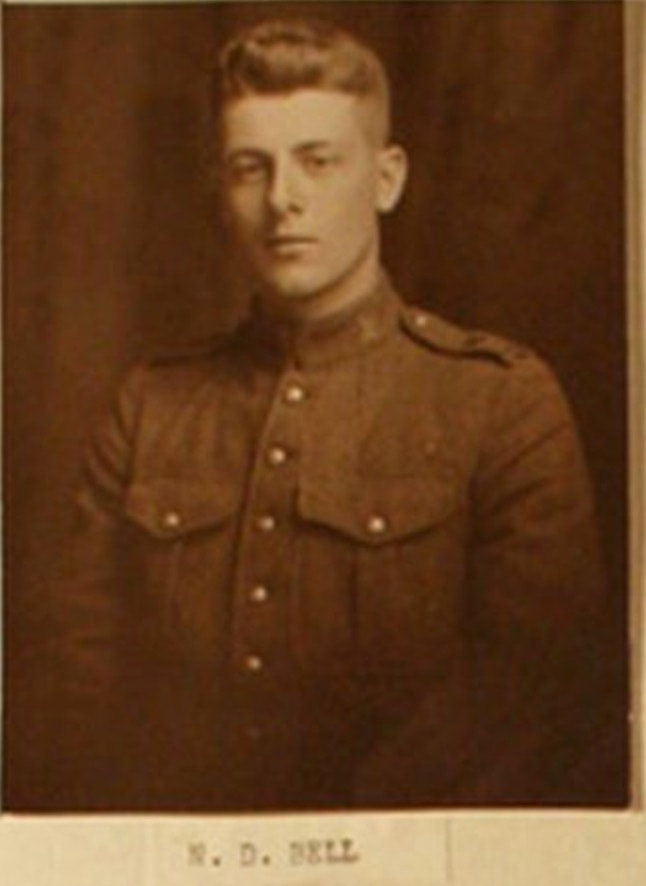 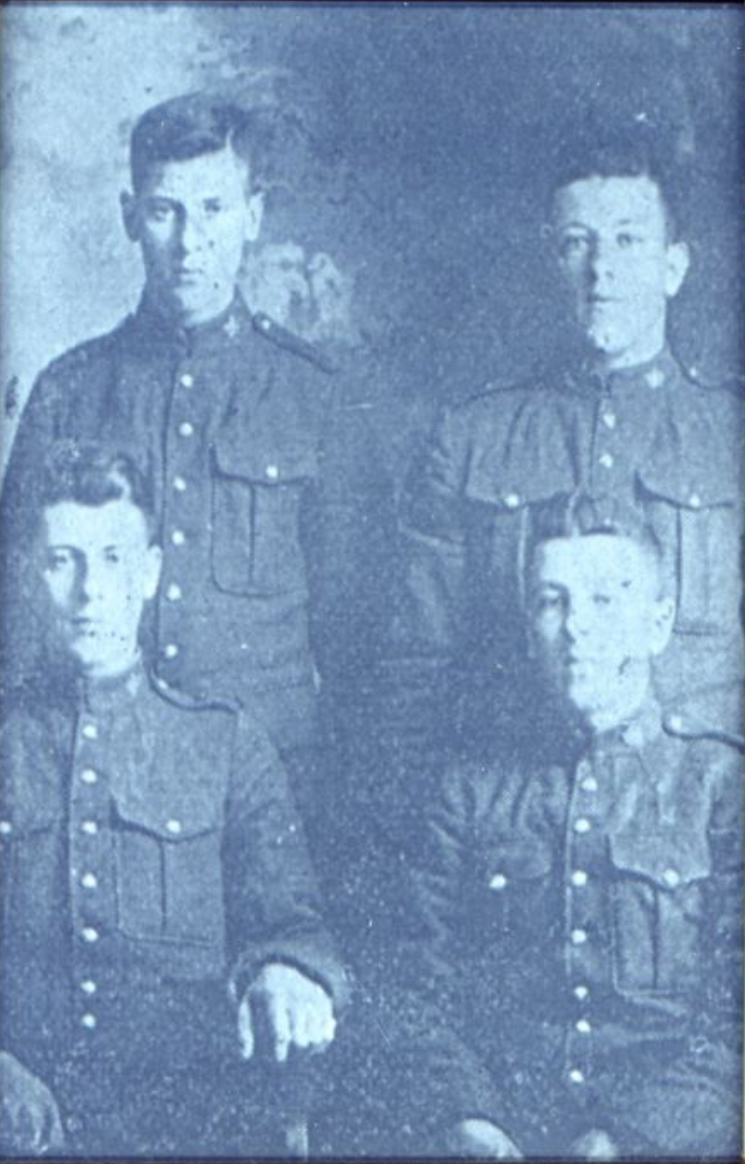 Four brothers who entered the war together, but only 2 made it home to Canada. The other 2 are buried at Dury Mill, both falling the same day within minutes of each other on Sept. 2nd, 1918.

The contributor of the pictures above, wishes to remain anonymous 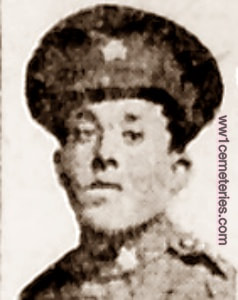 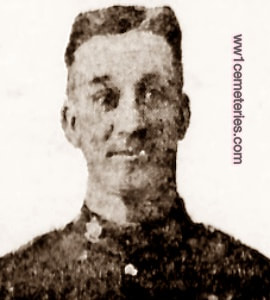 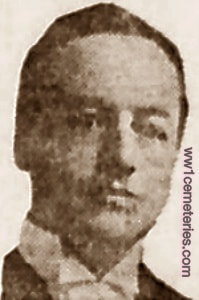 His headstone has the following inscription; "To die thus is immortality."

His headstone has the following inscription; "Lead thou me on The night is dark and I am far from home. Still lead thou me on."
​ 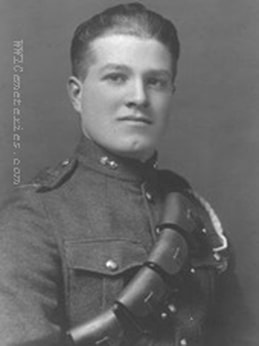 Son of Thomas and Margaret Harrison, of Harriston, Ontario. 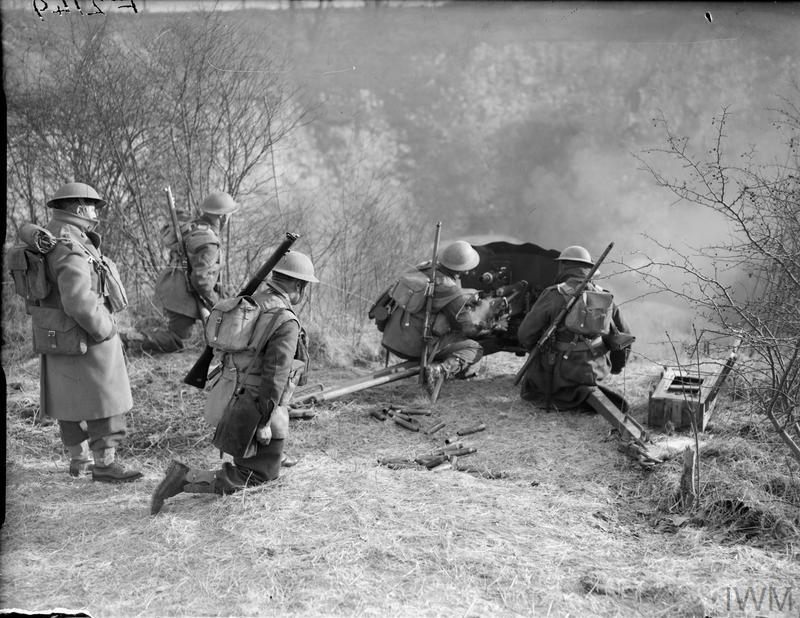 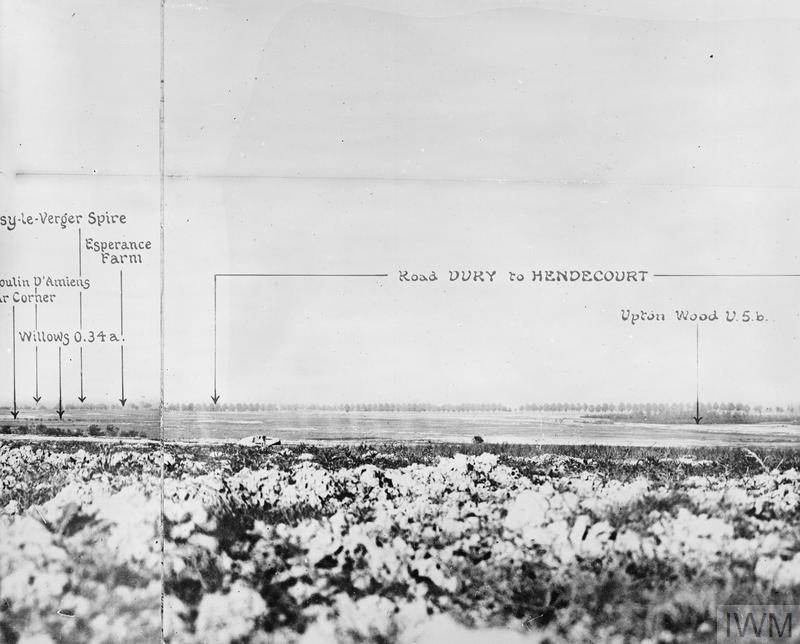