The Anzac and Suvla cemeteries are first signposted from the left hand junction of the Eceabat- Bigali Road. From this junction travel into the main Anzac area. After 12.8kms Embarkation Pier cemetery will be found on the left.

Embarkation Pier is on the north side of the mouth of Chailak Dere, at the north end of Ocean Beach (or North Beach). The cemetery is a little way inland, between the beach and the road from Anzac to Suvla.

The Cemetery is permanently open and may be visited at any time. The location/design of this site, makes wheelchair access impossible.

Early in August 1915, the Embarkation Pier area was occupied by the headquarters of two divisions, and later by the 16th (British) Casualty Clearing Station. The pier was made for the purpose of evacuating wounded from the Battle of Sari Bair, but it came under heavy rifle and shell fire and was abandoned after just two days.

Apart from five original burials, the cemetery is made up of burials brought in after the Armistice from the cemeteries known as Chailak Dere Nos 1 and 2, Mulberry Tree, and Apex, and from isolated graves.

There are now 944 Commonwealth servicemen buried or commemorated in the cemetery. There are special memorials to 262 casualties known or believed to be buried among them but 662 of the burials are unidentified. 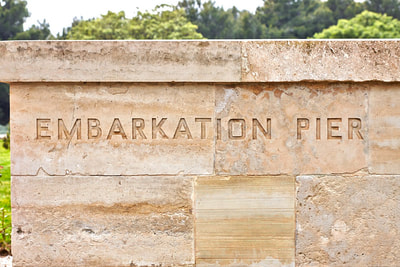 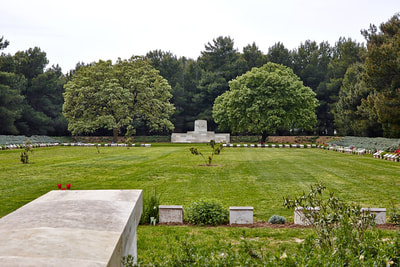 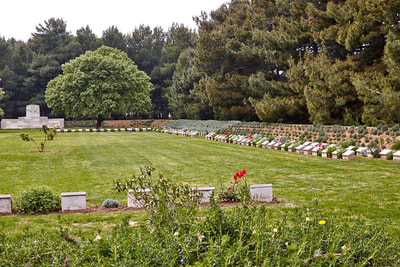 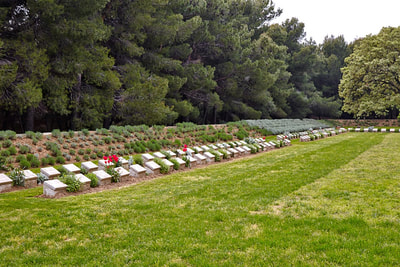 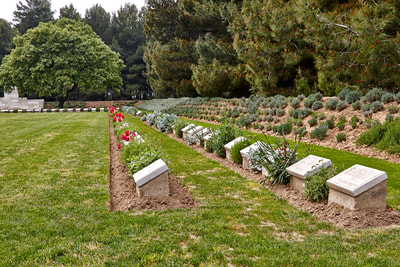 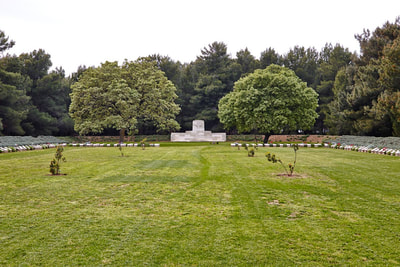 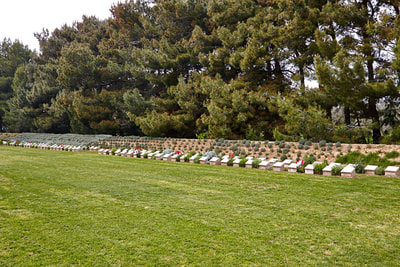 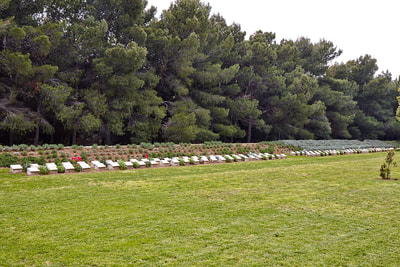 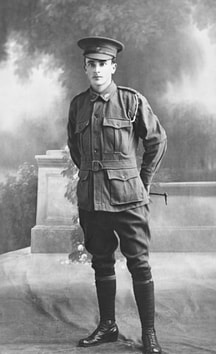 Inscription " Sleep on dear son & take thy rest. They miss you most who loved you best" 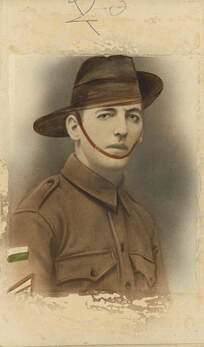 Inscription " And the morn those angel faces smile"

A hand coloured portrait of Lieutenant (Lt) Archibald Vivian (Viv) Auchterlonie, one of the three Auchterlonie brothers, from Inglewood Hill, near Gympie, Queensland. The eldest, Lt Archibald Vivian Auchterlonie initially served as a sergeant with the Australian Naval and Military Expeditionary Force (AN&MEF) on Thursday Island in August 1914 before successfully applying for a commission in the AIF in early 1915. He was killed on 20 October, 1915 at Gallipoli, aged 23 and is buried at Embarkation Pier Cemetery, Gallipoli Peninsula, Turkey. His younger brother, 1702 Sergeant Bertrand Innes (Bert) Auchterlonie, 15th Battalion was killed on 8 August 1915 at Gallipoli, aged 21 and is commemorated on the Lone Pine Memorial, Gallipoli. The youngest, 1030 Lt Cecil Arthur Auchterlonie, also of the 25th Battalion, served at Gallipoli and was later awarded the Military Cross for actions near Villers Bretonneux in July 1918. He was awarded a Bar to his MC a month later. Lt Cecil Auchterlonie was killed in action on 10 August 1918, aged 22 and is buried in Heath Cemetery in France.

The hand-colouring of these portraits contributes to the uncertainty surrounding the identities of the men. The service record of all three Auchterlonie brothers records their brown eyes, a feature misrepresented by the stark blue eyes created by the studio’s hand colouring. Further contradictory visual evidence includes the incorrect colour patches added to their uniforms and the heavy brush-strokes concealing the correct physiognomy of the men. This is exacerbated by the physical disparity of those depicted in these portraits with other portraits of the Auchterlonie brothers held at the Memorial (See P01202.001) and in private collections. Nevertheless, the portraits were donated to the Memorial by a sister of the men, almost certainly confirming their validity as true, if somewhat distorted representations of them. 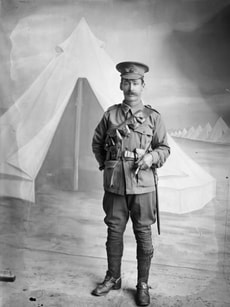 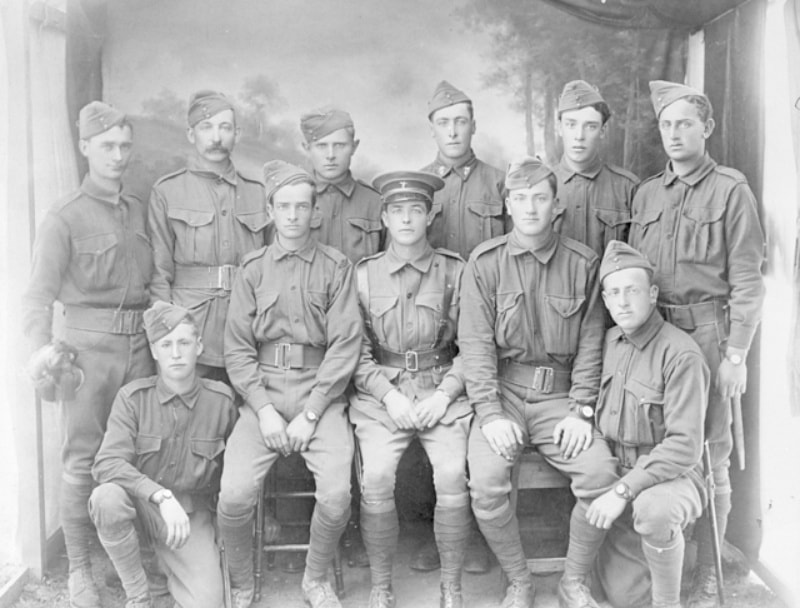 Studio portrait of a group of 11 soldiers, shortly after their enlistment in the AIF and assignment to the 6th Battalion. 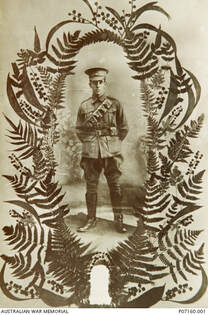 Studio portrait of 1100 Trooper (Tpr) Charles William Collins, 9th Light Horse Regiment, of Wanbi, SA. The portrait is framed by a decorative photographic border of eucalyptus leaves, wattle and ferns. A farmer and motor mechanic before enlisting on 20 January 1915, Tpr Collins embarked from Adelaide on RMS Morea on 26 August 1915 with the 8th Reinforcements. He was killed in action on Gallipoli on 29 November 1915 at the age of 27. 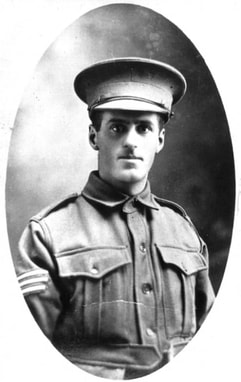 Studio portrait of 253 Sergeant (Sgt) William Henry Cooling, 26th Battalion, of Corrinda, Qld. A school teacher prior to enlisting in May 1915, Cooling embarked as a Sergeant from Brisbane on board HMAT Ascanius (A11) on 24 May 1915. On 22 October 1915, Sgt Cooling died of wounds received in action at Gallipoli. He was 20 years of age. 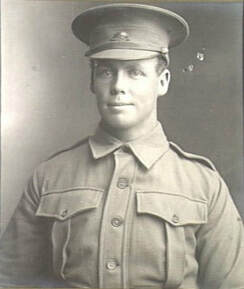 Son of Alfred B. and Mary Dean. Native of Port Melbourne, Victoria, Australia.

Studio portrait of 88 Trooper John Francis Dean, 8th Light Horse from West Brunswick, Melbourne, Victoria. A 25 year old labourer prior to enlisting on 8 September 1914, he embarked for overseas with A Squadron from Melbourne on 25 February 1915 aboard HMAT Star of Victoria. While serving at Gallipoli, he suffered a gunshot wound to the head at Walker's Ridge and died of his wounds on 11 August 1915. He is buried in the Embarkation Pier Cemetery at Gallipoli, Turkey. His younger brother, 2166 Private William Walter Dean, served in the 4th and 13th Light Horse Regiments and was awarded the Military Medal. 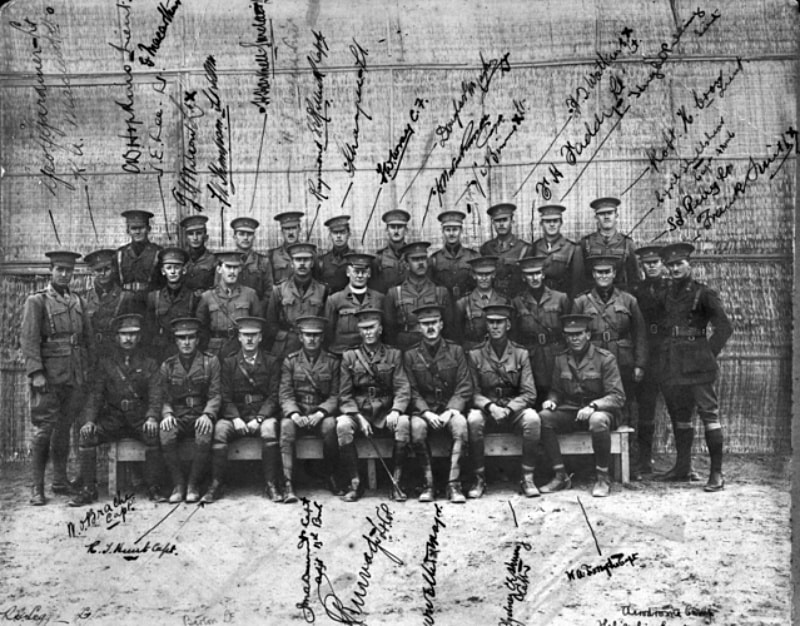 Group portrait of officers, many from the 13th Infantry Battalion, annotated "Aerodrome Camp". Some in this group died at Gallipoli. 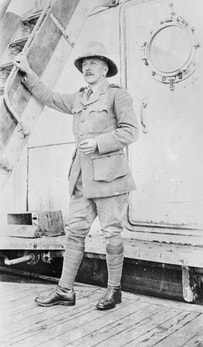 c. 1915. Informal portrait of Captain The Reverend Andrew Gillison, Chaplain 4th Class, of St Kilda, Vic, on board a ship. He died of wounds in Gallipoli on 22 August 1915 and he is buried at the Embarkation Pier Cemetery. Born in Scotland in c. 1869 to John Gillison and Jane Brootch, he was the husband of Isobel Gillison. (Donor D. Culey) 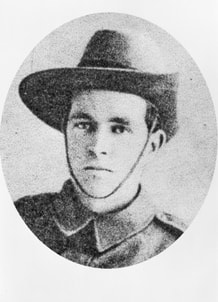 Inscription "For king and country" 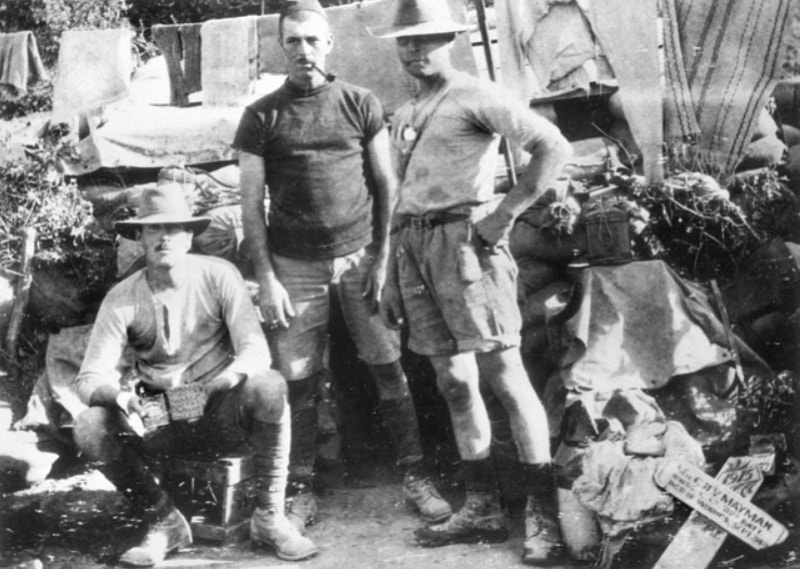 Three unidentified soldiers outside dugouts of C Section 7th Australian Field Ambulance at Chailak Dere. The soldier (left) sitting on a box has a wounded hand and is holding a tin in his right hand and a biscuit in his left hand. In the right foreground is a wooden cross which is inscribed '1915 L/Cpl C H V MAYMAN No 634 C Co 27th Batt Died of Wounds Sept 24th'. 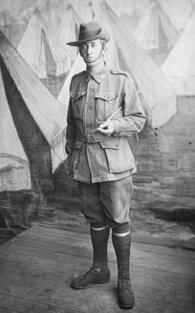 Studio portrait of 1228 Private Charles Frederick Palmer, 15th Battalion. A miner of Branxholm, Tas, he enlisted on 1 October 1914 and sailed with H Company aboard HMAT Ceramic on 22 December 1914. He was killed in action, aged 21, on 25 August 1915 on the Gallipoli Peninsula. 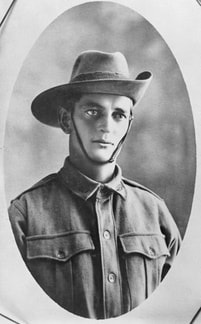 Studio portrait of 2183 Private (Pte) Louis Victor Parker, 15th Battalion. Pte Parker, a bricklayer from Belmore, NSW prior to enlistment, embarked with the 6th Reinforcements from Brisbane on HMAT Karoola on 12 June 1915. On 8 August 1915, aged 27, he died of wounds received in action and was buried in the Embarkation Pier Cemetery, Gallipoli. 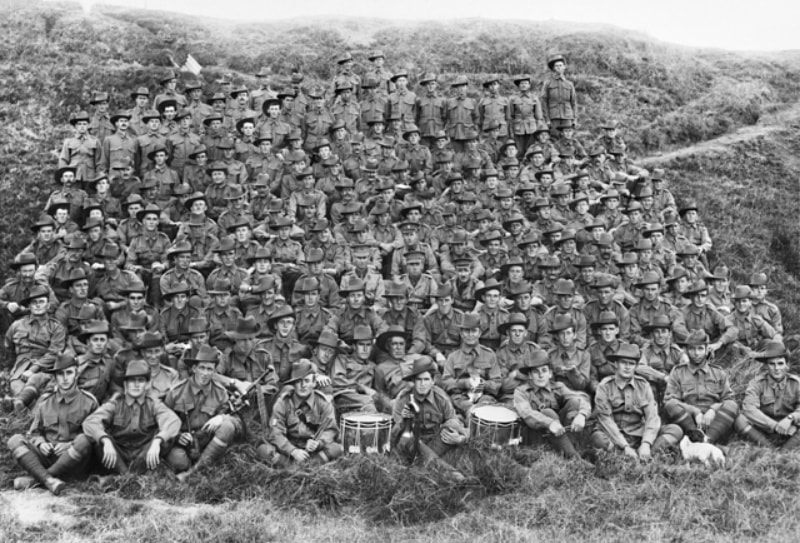 Group portrait of members of D Company, 18th Battalion, taken at the Liverpool, NSW Army camp shortly before the troops embarked to take part in World War 1. Soon after this photo was taken, many of the troops were drafted into other Battalions including the 17th, 19th and 20th. Of those who remained and sailed with the 18th Battalion on 25 June 1915, 23 died in the Battle of Hill 60 at Gallipoli on 22 August 1915.