The Lone Pine Memorial is at the east end of Lone Pine Cemetery.

At 7.6kms., take a right turn to Chunuk Bair and initially take the road to Kemalyeri. At 10.3kms, Lone Pine will be found on the left. Lone Pine Cemetery stand on the plateau at the top of Victoria Gully.

The Cemetery is permanently open and may be visited at any time. Wheelchair access to the cemetery is possible via the main entrance.

Lone Pine was a strategically important plateau in the southern part of Anzac which was briefly in the hands of Australian forces following the landings on 25 April. It became a Turkish strong point from May to July, when it was known by them as 'Kanli Sirt' (Bloody Ridge).

The Australians pushed mines towards the plateau from the end of May to the beginning of August and on the afternoon of 6 August, after mine explosions and bombardment from land and sea, the position was stormed by the 1st Australian Brigade. By 10 August, the Turkish counter-attacks had failed and the position was consolidated. It was held by the 1st Australian Division until 12 September, and then by the 2nd, until the evacuation of the peninsula in December.

The LONE PINE MEMORIAL stands on the site of the fiercest fighting at Lone Pine and overlooks the whole front line of May 1915. It commemorates more than 4,900 Australian and New Zealand servicemen who died in the Anzac area - the New Zealanders prior to the fighting in August 1915 - whose graves are not known. Others named on the memorial died at sea and were buried in Gallipoli waters.

The memorial stands in LONE PINE CEMETERY. The original small battle cemetery was enlarged after the Armistice when scattered graves were brought in from the neighbourhood, and from Brown's Dip North and South Cemeteries, which were behind the Australian trenches of April-August 1915.

There are now 1,167 Commonwealth servicemen of the First World War buried or commemorated in this cemetery. 504 of the burials are unidentified. Special memorials commemorate 183 soldiers (all but one of them Australian, most of whom died in August), who were known or believed to have been buried in Lone Pine Cemetery, or in the cemeteries at Brown's Dip. 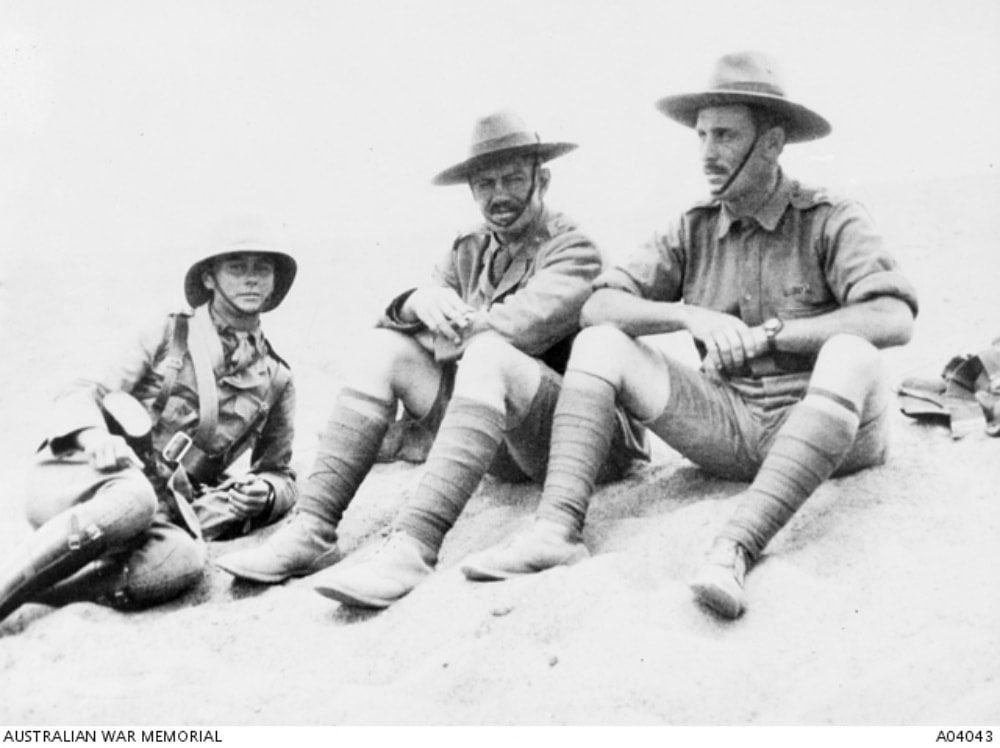 ​
Informal group portrait of three 1st Battalion officers at their camp outside Cairo. Identified left to right: Captain Albert George McGuire, who later died of wounds in Egypt on 7 May 1915, age 23; Major Blair Inskip Swannell, who was killed during the landing at Anzac Cove on 25 April 1915; Lieutenant Alfred John Shout (later Captain, MC and VC), who died at sea on 11 August 1915 of wounds sustained at Lone Pine on 9 August.

Citation: An extract from "The London Gazette," No. 29328, dated 15th Oct., 1915, records the following:-"For most conspicuous bravery at Lone Pine trenches in the Gallipoli Peninsula on the 9th Aug., 1915. In the early morning the enemy made a determined counter-attack on the centre of the newly captured trench held by Lieutenant Tubb, Corporals Burton and Dunstan, and a few men. They advanced up a sap and blew in a sandbag barricade, leaving only one foot of it standing, but Lieutenant Tubb, with the two corporals, repulsed the enemy and rebuilt the barricade. Supported by strong bombing parties, the enemy twice again succeeded in blowing in the barricade, but on each occasion they were repulsed and the barricade rebuilt, although Lieutenant Tubb was wounded in the head and arm, and Corporal Burton was killed by a bomb while most gallantly building up the parapet under a hail of bombs."

Citation: An extract from "The London Gazette," No. 29328, dated 15th Oct., 1915, records the following:-"For most conspicuous bravery at Lone Pine trenches, in the Gallipoli Peninsula. On the morning of the 9th Aug., 1915, with a very small party, Capt. Shout charged down trenches strongly occupied by the enemy, and personally threw four bombs among them, killing eight and routing the remainder. In the afternoon of the same day, from the position gained in the morning, he captured a further length of trench under similar conditions, and continued personally to bomb the enemy at close range under very heavy fire until he was severely wounded, losing his right hand and left eye. This most gallant officer has since succumbed to his injuries." 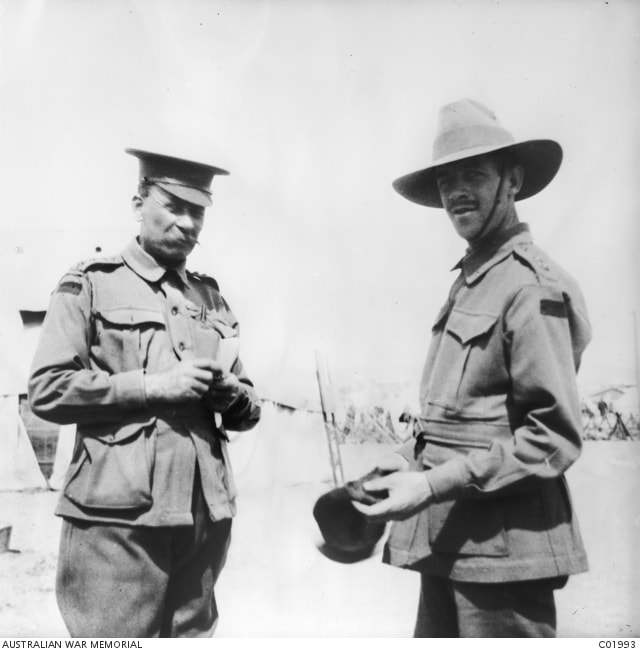 Informal portrait of two officers of the 1st Battalion; Major (Maj) William Davidson (left) of Oakley, NSW and Lieutenant (Lt) William Sydney Duchesne of Summer Hill, NSW. Both men embarked from Sydney on HMAT Afric on 18 October 1914. Maj Davidson, a professional soldier and a native of Nairn Scotland, died on board HMHS Guildford on 21 August 1915, aged 48, from wounds received in action at Gallipoli. He was buried at sea and is commemorated on the Lone Pine Memorial. Lt Duchesne, a military student prior to enlistment, was killed in action at Gallipoli sometime between the 25 and 28 April 1915, aged 20 and is buried in the Baby 700 Cemetery, Anzac. 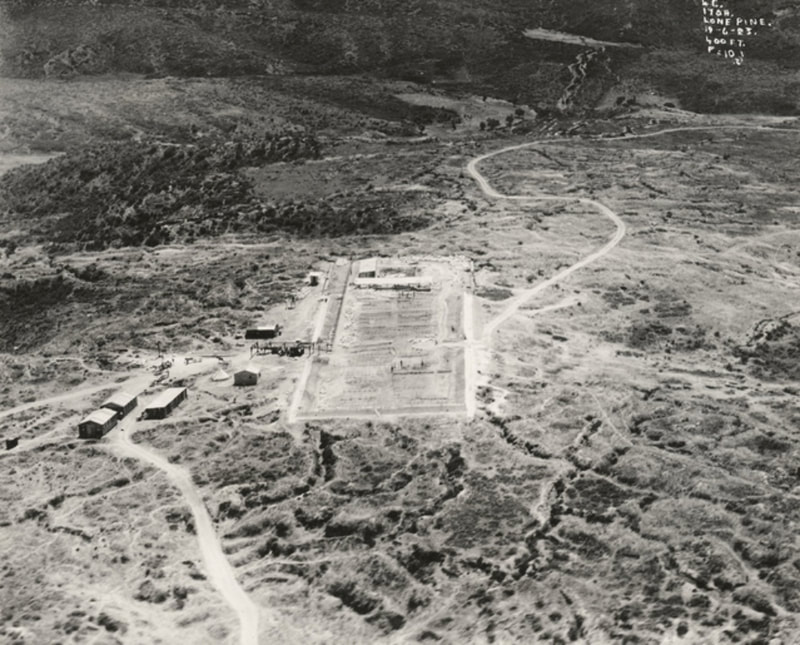 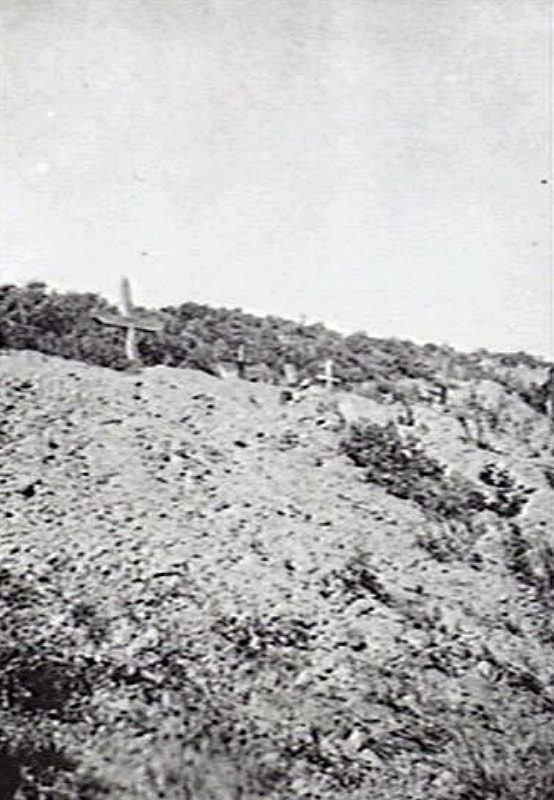 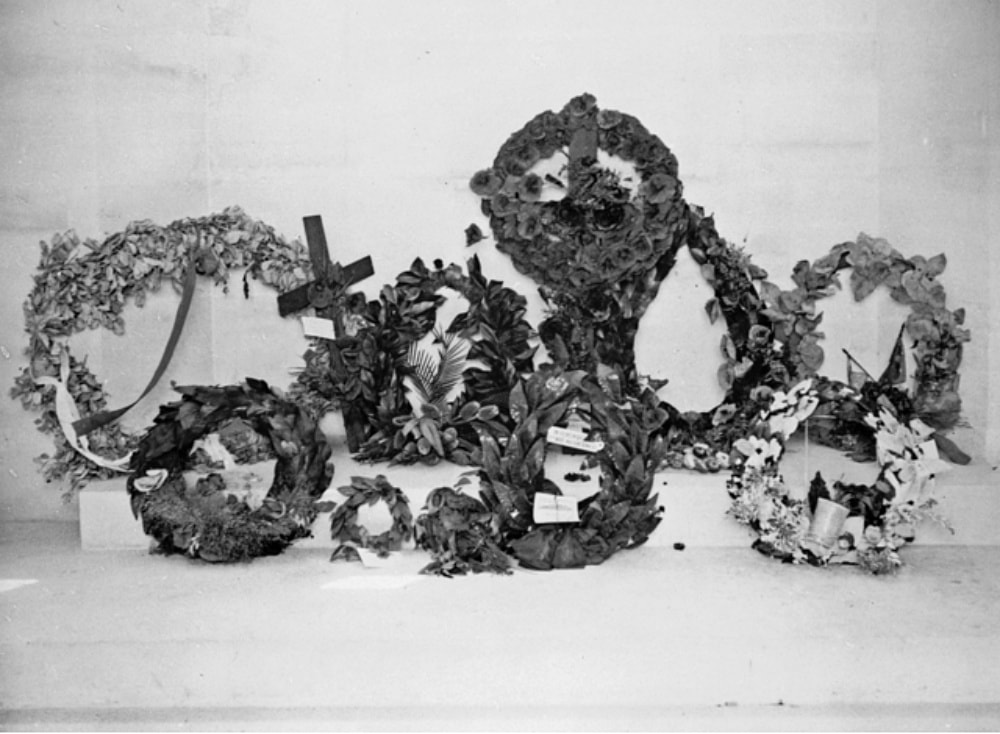 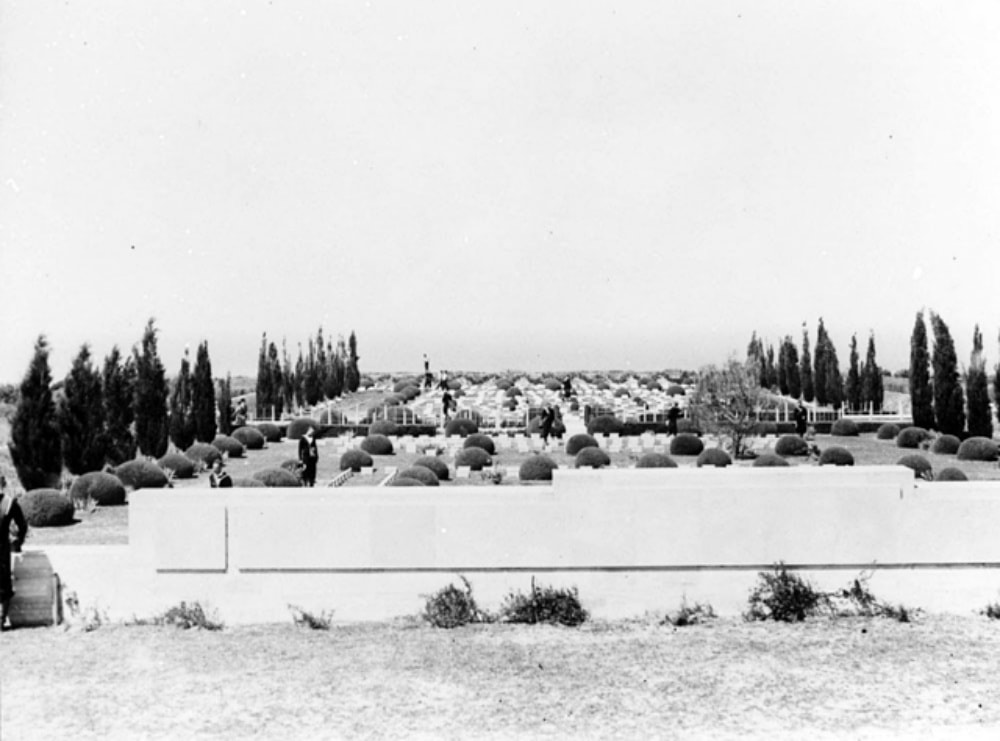 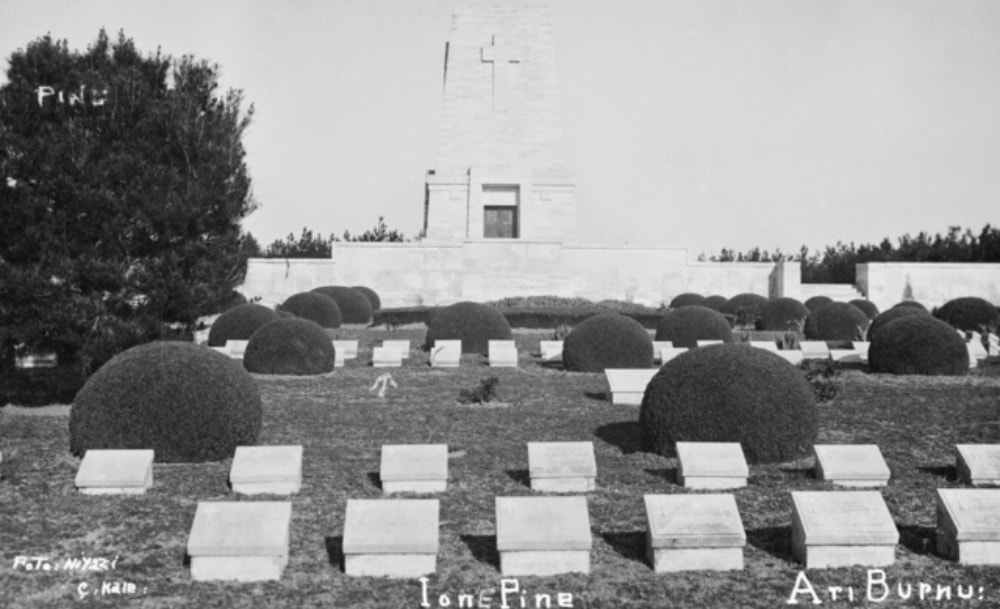 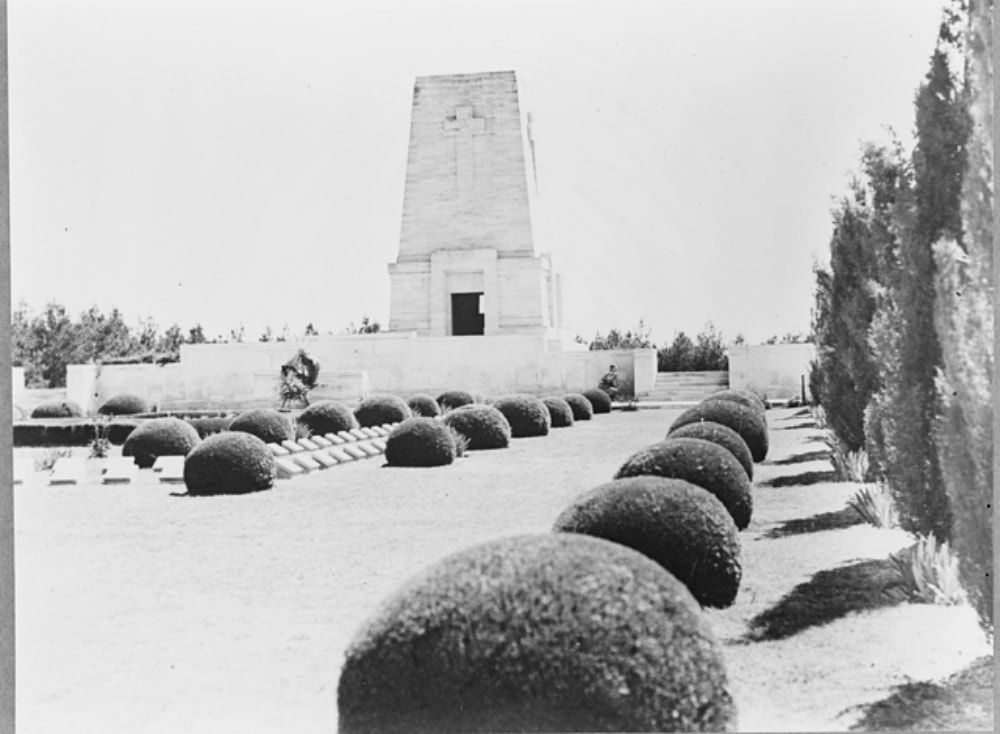 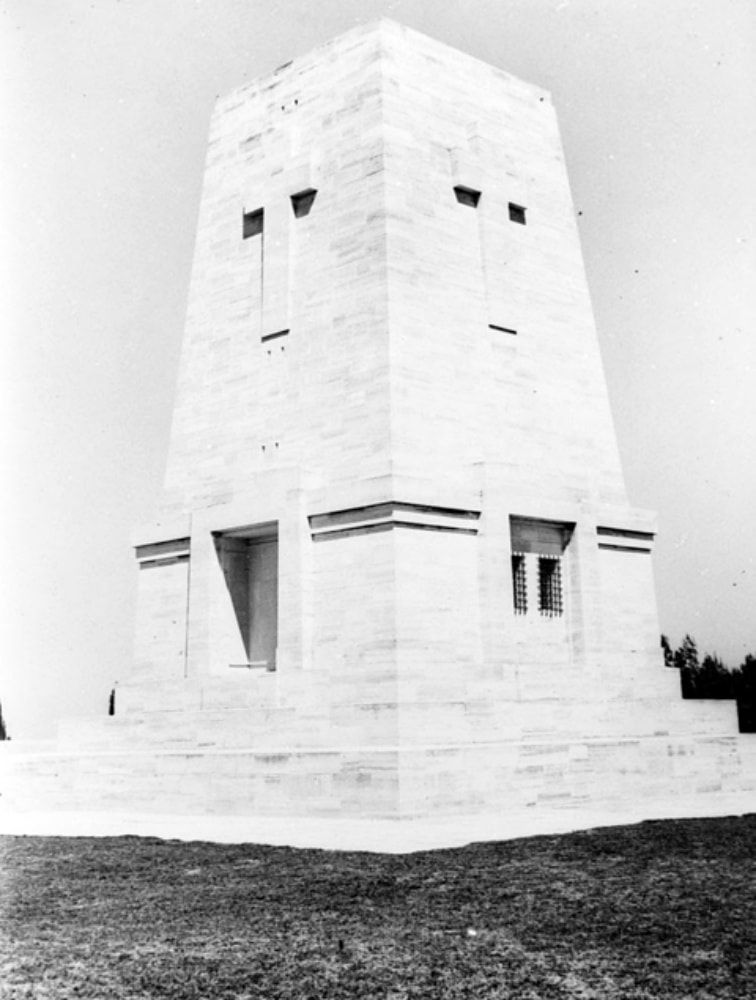 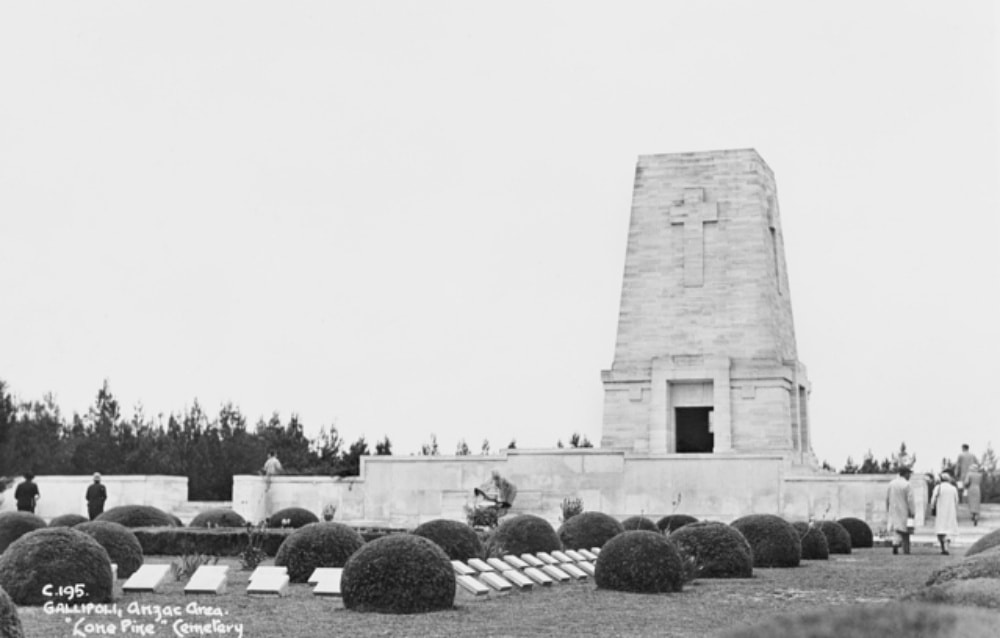 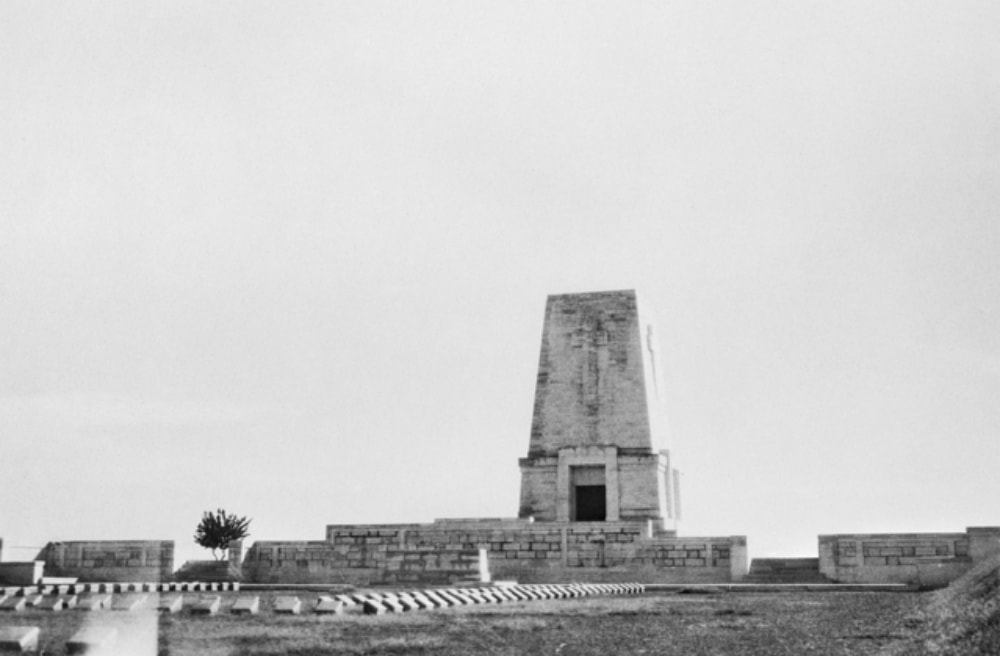