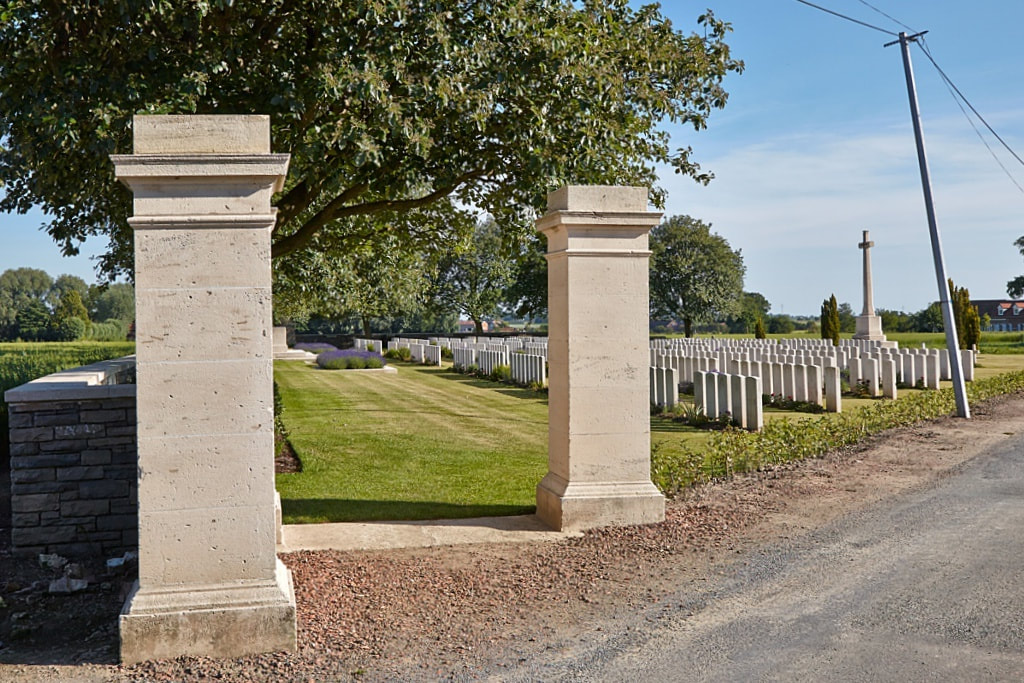 Esquelbecq is a village near the Belgian frontier, 24 kilometres north of Hazebrouck and the same distance south of Dunkirk. The Military Cemetery is about one kilometre west of the village, 200 metres south of the road to Zeggers-Cappel.

The cemetery was opened in April 1918 during the early stages of the German offensive in Flanders, when the 2nd Canadian and 3rd Australian Casualty Clearing Stations came to Esquelbecq. It was closed in September 1918.

The cemetery was used again during the Second World War, mainly for the burial of those killed during the German advance of May 1940 and the withdrawal of the British Expeditionary Force to Dunkirk.

Esquelbecq Military Cemetery contains 578 Commonwealth burials of the First World War and 47 from the Second World War. There are also 11 French and German burials.

Commemorated here are 30 of the victims of the Wormhoudt massacre that occurred on 28 May 1940 during the evacuation from Dunkirk.

On previous days, the First Battalion of the Leibstandarte SS Adolf Hitler (formed in 1933 as Hitler’s personal bodyguard) had suffered a heavy defeat at the hands of the Royal Warwicks, the Royal Cheshires & the Royal Artillery; &  moreover SS General Sepp Dietrich (C-in-C of the Sixth SS Panzer Army) had twice been attacked when being driven around the area in his car, wounded the second time, & — at some cost to the SS — rescued.

​Orders were given to the Second Battalion (under Hauptsturmführer Wilhelm Mohnke) to attack the British HQ at Wormhoudt.  When this was overrun, & ammunition exhausted, surrender was inevitable.  The remaining British troops (almost 100) were rounded up, & in due course marshalled into an empty barn.  Hand-grenades were then thrown in, but when the SS realised that 2 British NCOs (Sgt Stanley Moore & CSM Augustus Jennings) had  thrown themselves  on top of the grenades to shield others, forced out some of the troops to be shot, & sprayed gunfire on those remaining inside.  The SS abandoned the scene, believing that there would be no survivors.  80 had died that day, a further 9 soon thereafter from their wounds, 6 survived, some of whom were able in due course to testify to the events.
​
Charge was taken of the scene 2 days later by German army medics (or a unit of the German Red Cross) who had been looking for wounded SS troops; & the dead soldiers were buried in a shallow grave nearby by the French.  Investigation began in early 1944 soon after the news reached Britain, but despite extensive inquiries, it did not prove possible to bring Mohnke to book for his crime.

Remembered with love by granddaughter Susan and family 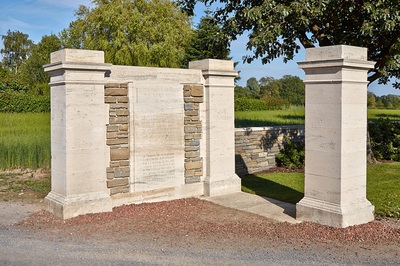 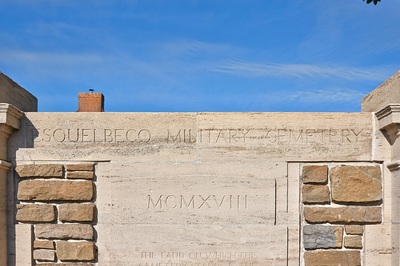 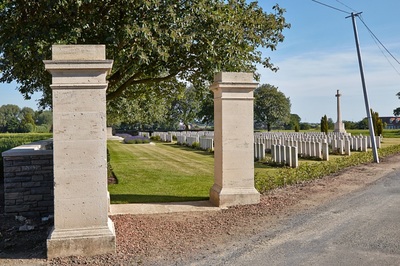 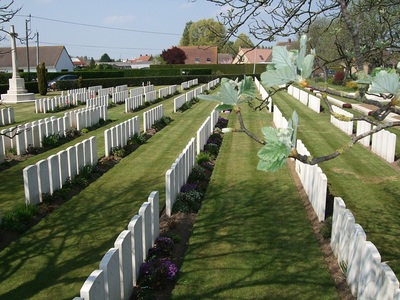 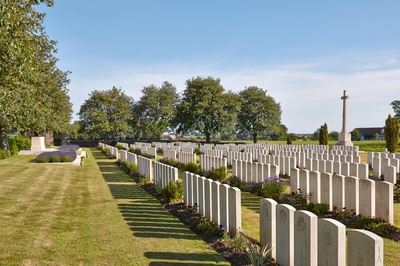 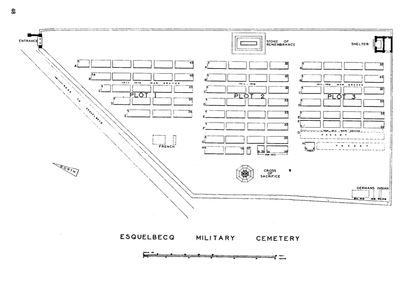 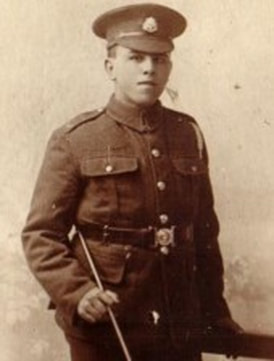 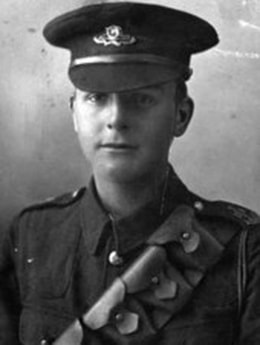 Son of Booth and Jessie Law, of 21, Darfield St., Bradford. 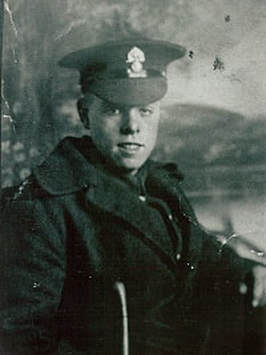 Son of Thomas and Ellen Moon, of 82, Priory St., Liverpool.

INSCRIPTION : GOD IS LOVE THY WILL BE DONE 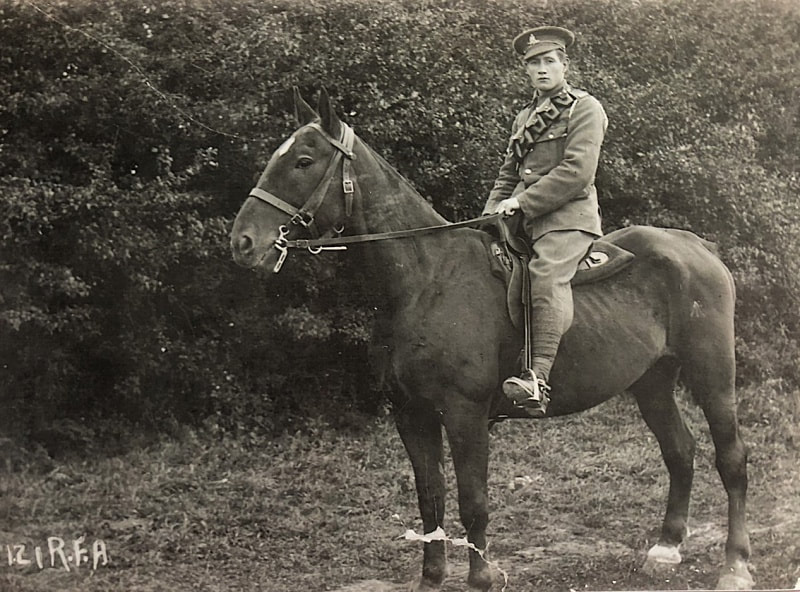 His headstone bears the inscription

"HE GAVE HIS LIFE FOR ALL" 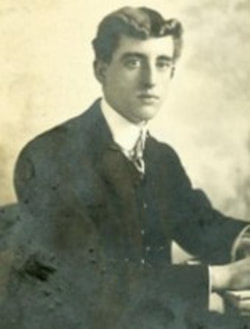 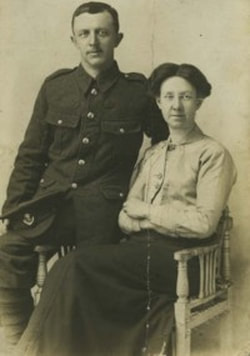 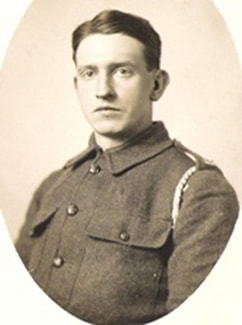 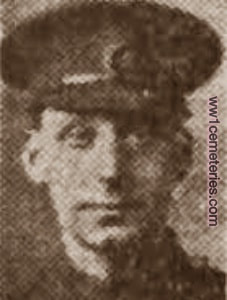 His headstone bears the inscription: "Thy Will be Done."
Shot at Dawn

Private George Hunter, 2nd Bn. Durham Light Infantry, executed for desertion on 2nd July 1916, Plot I. B. 1A. Having absented himself previously on 10 different occasions,& also having been convicted of carelessly wounding himself, he deserted from the trenches at the north of Ypres during May 1916.  Hunter was the first of the very few soldiers who managed to cross the Channel to England — where he was arrested.  At trial, he claimed to have suffered from ‘a wandering mind’ for 18 months; & after trial his commanding officer recommended examination for mental abnormality, but no notice was taken.  (Putkowski, p.92) 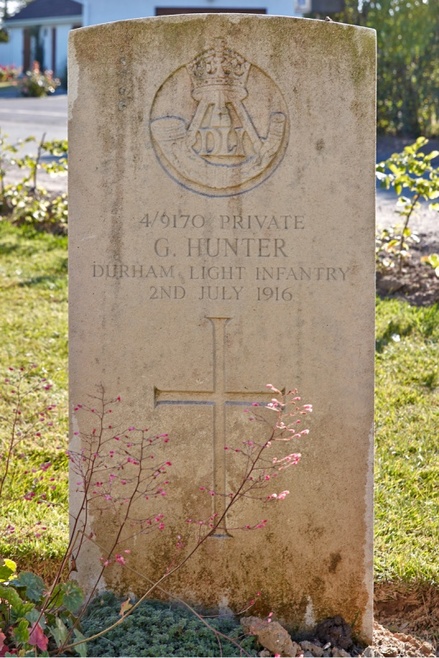 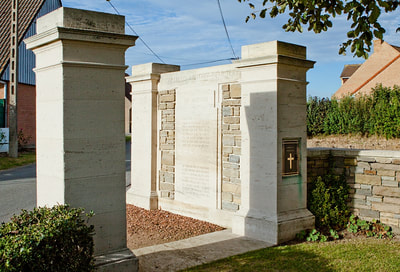 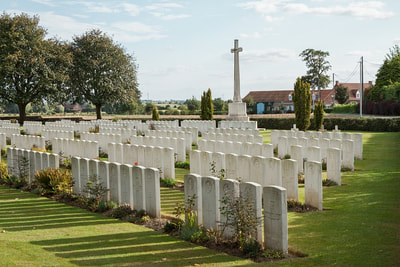 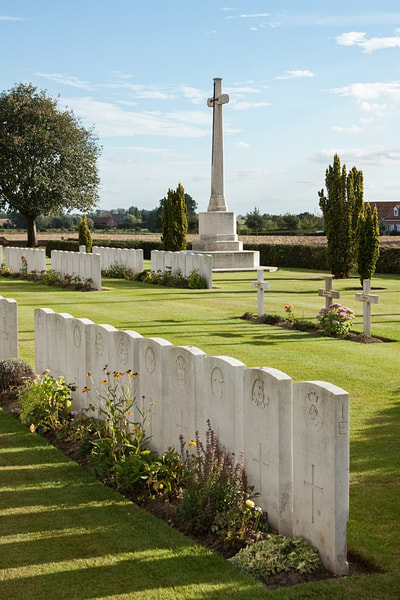 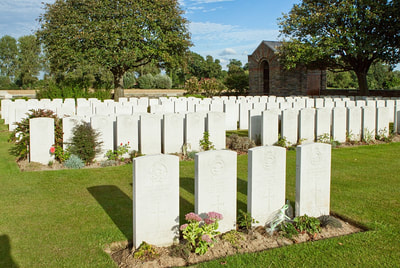 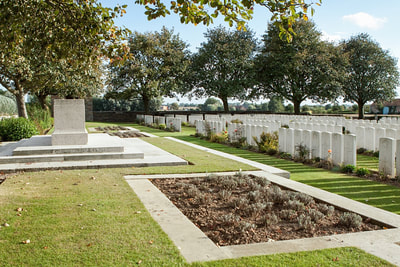 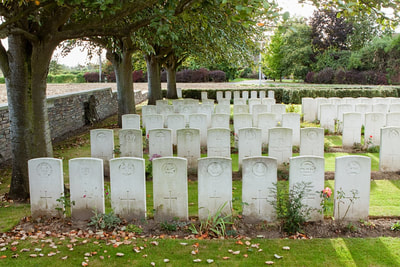 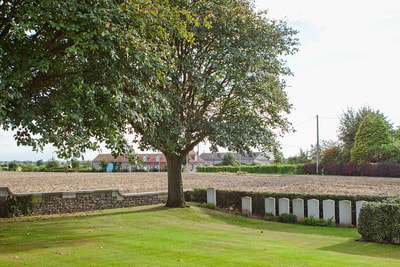 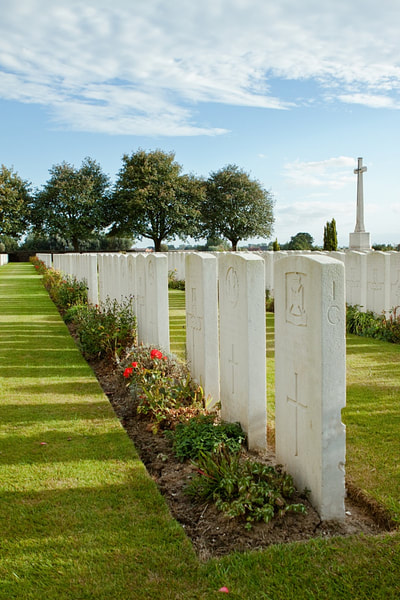 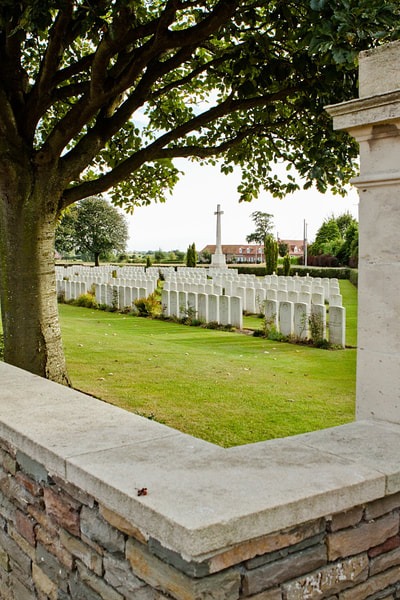 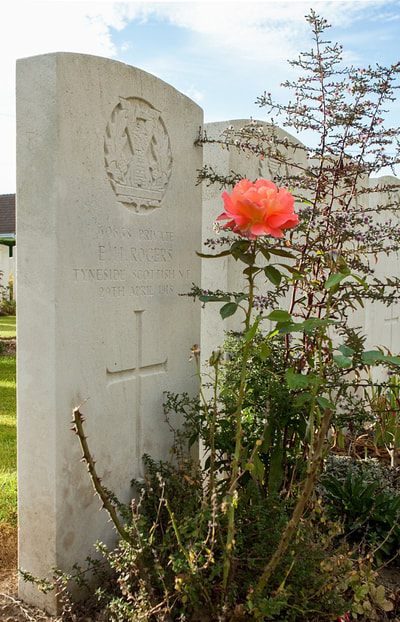 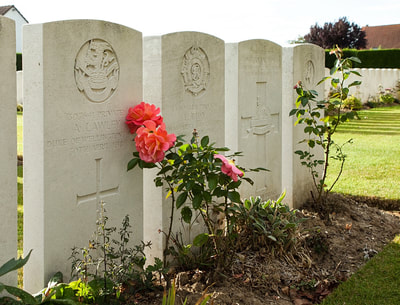 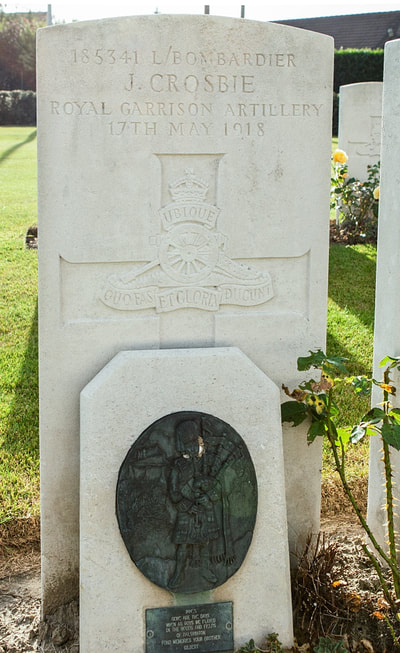 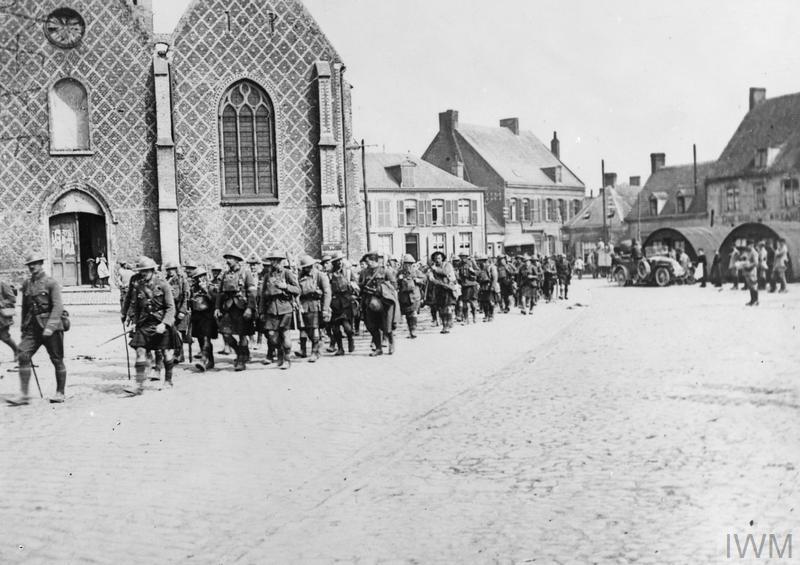 Troops of a Scottish regiment returning from the lines passing through Esquelbecq, 4 May 1918. © IWM (Q 60807) 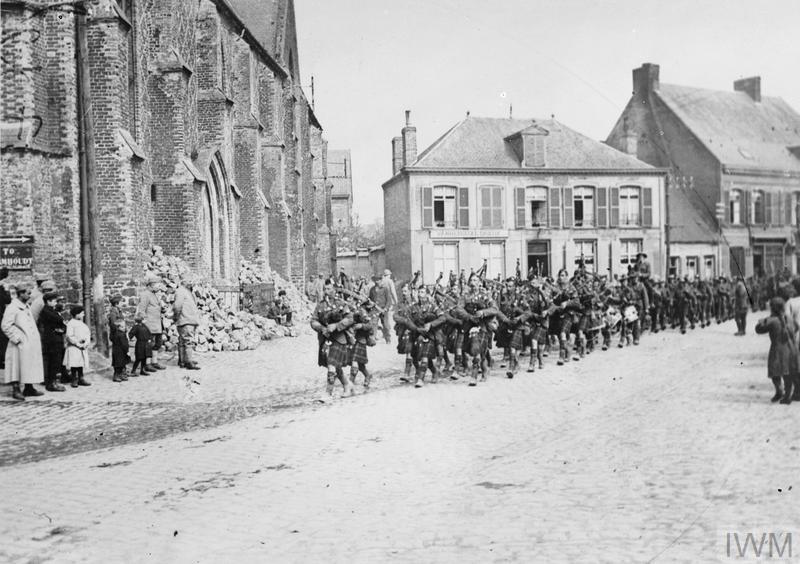