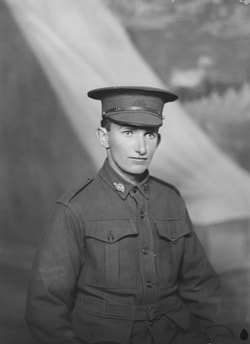 Inscription "In Memory Of The Dearly Loved Son Of Mr. & Mrs. Barnes Of Coburg"

Studio portrait of 3463 Private William Gladstone Barnes, 58th Battalion, of Coburg, Victoria. A draper prior to enlistment, he embarked on HMAT Afric on 5 January 1916 initially to join the 57th Battalion in Egypt. In March 1916 he was transferred to the 58th Battalion and then was sent to France in June 1916. He was wounded in the field on 31 August 1916 and died the following day in the 1st Australian Casualty Clearing Station 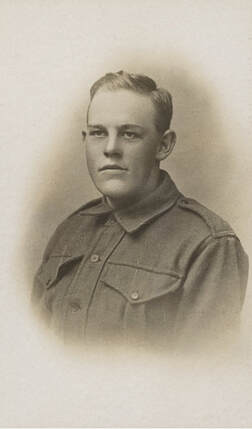 Portrait of 1615 Private (Pte) Cecil James Baxter a carrier of Burwood, New South Wales. He enlisted on 16 February 1916 and embarked on HMAT Ceramic for Egypt. On 28 May 1916 he was transferred to the 56th Battalion and embarked at Alexandria and disembarked at Marseilles on 29 June 1916 for service on the Western Front. Pte Baxter was wounded in action during the Battle of Fromelles and died in the 1st Australian Casualty Clearing Station on 22 July 1916, aged 22 years. 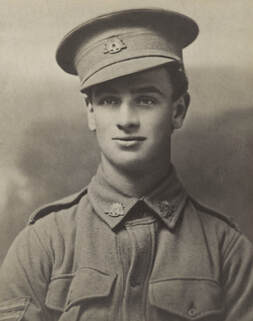 Inscription "He Died The Noblest Death That Man May Die"

Portrait of 3255 Acting Corporal (Cpl) Eldred James Belford, a cleaner for the NSW Government Railway, of Toronto, New South Wales. He enlisted in the 1st Battalion on 13 July 1915 and embarked from Sydney on HMAT Themistocles on 5 October 1915 for Alexandria, Egypt. The battalion then sailed for Marseilles, France, en route to the Western Front on 28 March 1916 where Private Belford was promoted to LCpl on 6 April 1916. LCpl Belford was wounded in action near Fromelles, France, on 18 June 1916 and died the following day in No 1 Casualty Clearing Station, Rouen.
​ 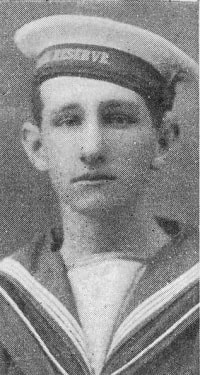 Inscription "Sacred Heart Of Jesus Have Mercy On His Soul"

Studio portrait of 130 Private William James Clarence Connors, of Darlinghurst, NSW, wearing his Royal Australian Naval Reserve uniform. Prior to his enlistment on 31July 1915, he spent ten and a half months as a naval guard at Cockatoo and Garden Islands. He embarked from Sydney, NSW, aboard HMAT Beltana on 9 November 1915. He died of wounds received at Armentieres, France, on 20 September 1916, aged 19, while serving with the 30th Battalion. 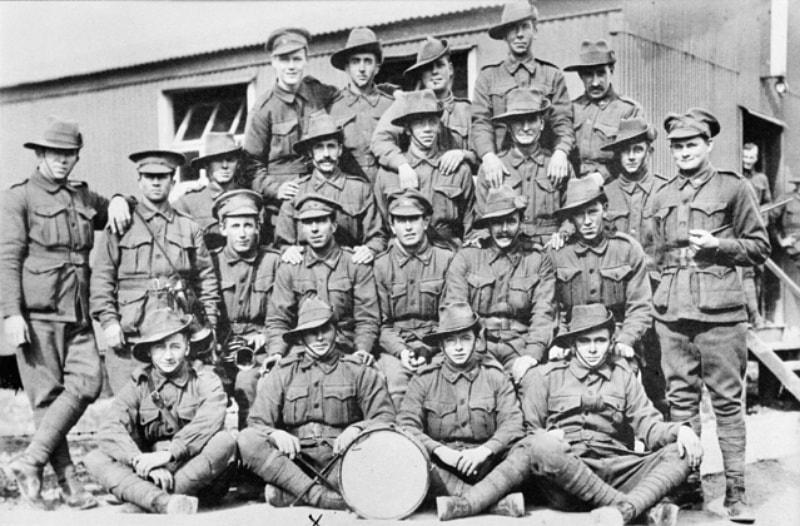 Group portrait of hut mates, all members of the 36th Battalion.
Identified in the back row, 4th from the left and buried in this cemetery is 2548 Private Frank Robert Cooper, 36th Bn. Australian Infantry, A. I. F. who died on 6th June 1917 from wounds received in action in Messines, Belgium. Plot IV. E. 4. Son of William and Helen Cooper; husband of Alice Alma Cooper, of Rawson St., Kurri Kurri, New South Wales. Born at Murrurundi, New South Wales. 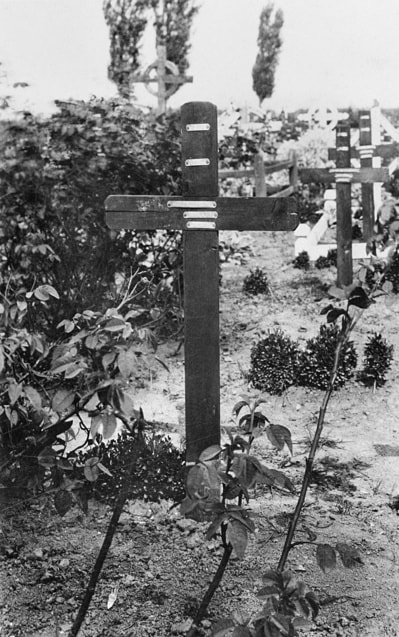 Grave of 3043 Private Thomas Crooks, 17th Battalion, of Rozelle, Sydney, NSW. A tram conductor prior to enlistment he embarked with the 7th Reinforcements on HMAT Suevic (A29) on 20 December 1915. He later transfered to the 55th Battalion and died of wounds in France on 13 October 1916, aged 25. Pte Crooks is buried in this cemetery. Plot II. B. 11. Son of Robert Stalker Crooks and Christina Crooks, of 31, Crescent St., Rozelle, New South Wales.Inscription "Too Far Away Your Grave To See But Not Too Far To Think Of Thee"

Inscription "A Destiny Too Great For Words Too Beautiful For Regret"

Studio portrait of 185 Private (Pte)) Herbert Martyn Davies, 13th Light Horse Brigade, of Heidelberg, Vic. A farmer prior to enlistment, Pte Davies embarked from Melbourne with C Squadron on HMAT Persic on 28th May 1915. After promotion to Sergeant (Sgt) he was transferred to the 57th Battalion where, on 22nd July 1916, he died of wounds received in action at Fleurbaix, France and was buried in the Estaires Communal Cemetery and Extension. His brother 5362 Pte Alan Mervyn Davies was killed in action on 17th July 1917 and is buried in Crucifix Corner Cemetery in France. 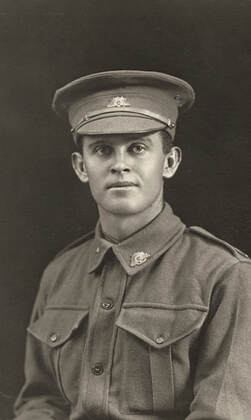 Inscription "Absent From The Body Present With The Lord"

Studio portrait of 2913 Private (Pte) Bertram George Dix, 32nd Battalion, of Renmark, SA. A carrier prior to enlistment, Pte Dix embarked with the 6th Reinforcements from Adelaide on HMAT Aeneas on 11th April 1916. On 9th August 1916 he died of wounds received in action and was buried in the Estaires Communal Cemetery, France. 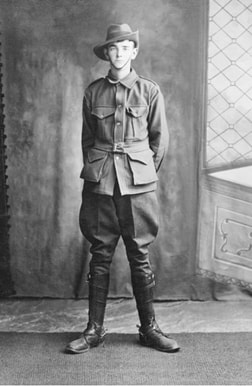 Studio portrait of 1158 Private (Pte) Timothy Doyle, 4th Light Horse Brigade, of Dubbo, NSW. A labourer prior to enlistment, Pte Doyle embarked with the 6th Reinforcements from Sydney on SS Hawkes Bay on 21 October 1915. After transferring to the 5th Division Trench Mortar Brigade with the rank of Gunner (Gnr) he died of wounds received in action on 13 September 1916, aged 18, and was buried in the Estaires Communal Cemetery and Extension. 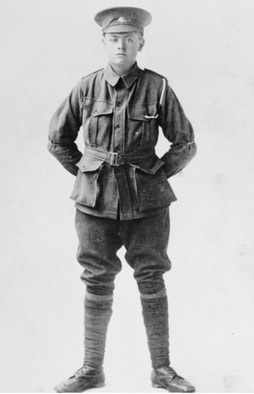 Inscription "In Memory Of The Dearly Loved Son Of G. And E. Fairs"

Studio portrait of 2648 Private (Pte) James Elvey Fairs, 28th Battalion of Bayswater WA, formerly of Sussex England. A bedmaker and apprentice upholsterer prior to enlistment, Pte Fairs embarked on board HMAT Ulysses (A38) on 2 November 1915. He later transferred to the 51st Battalion. Pte Fairs died on 6 July 1916 of wounds received in action at Fleurbaix, France. 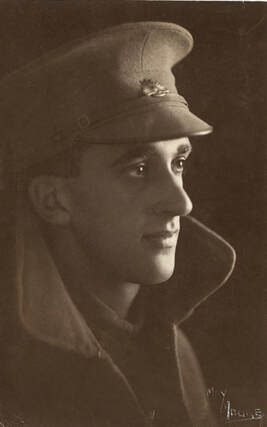 Studio portrait of 9146 Gunner (Gnr) Leopold Eric Alexis Ferguson, Dermatalogical Hospital Unit, of Goulburn, NSW. A clerk prior to enlisting with the AIF on 18 June 1915, he embarked from Sydney aboard HMAT Kanowna on 22 December 1915. Gnr Ferguson transferred to Artillery training on 2 April 1916 and in December was transferred to the 25th Field Artillery Brigade (FAB) to the 106th Battery. He died of wounds on 9 June 1917 in France, whilst serving with the 106th Battery, FAB. His cousin, Captain Leon Dudley Ferguson MC, 45th Battalion, of, North Sydney, NSW, also served with the AIF; he returned to Australia on 1 November 1919. 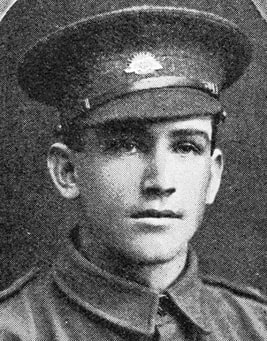 Inscription "For God, For King And Country Deeply Mourned By Relatives"

Studio portrait of 2192 Private Dallas William Henry Green, (also known as Frank Henry Green) 31st Battalion of Wollongong, NSW. A labourer prior to enlisting, he embarked from Melbourne aboard HMAT Ballarat (A70) on 18 February 1916. He was wounded at Fleurbaix France, on 17 July 1916 and died on 18 July 1916 at the 1st Casualty Clearing Station, France, aged 22.