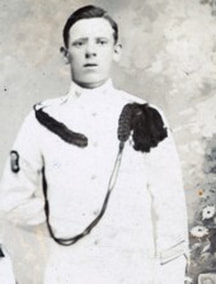 "In loving memory" from Louisa, Ethel and Margaret
​
Picture courtesy of Margaret Thomas 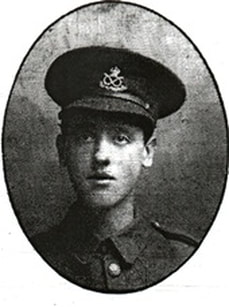 Killed during the attack on the Hohenzollern Redoubt 13/10/1915 and his body was never found. 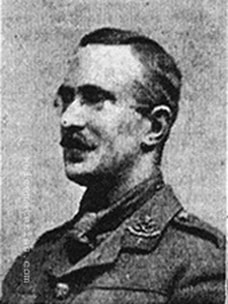 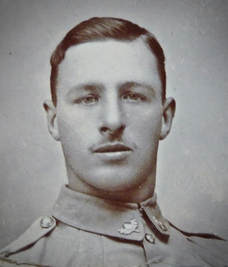 Son of the late Mr. and Mrs. Henry Howerth Dance and Brother of Ella Mary. 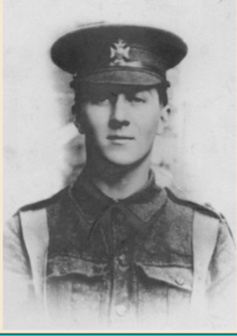 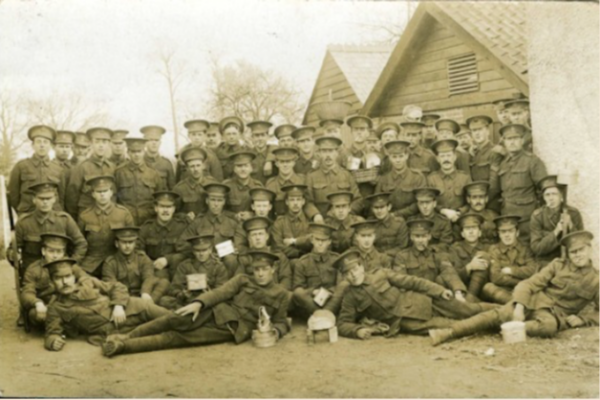 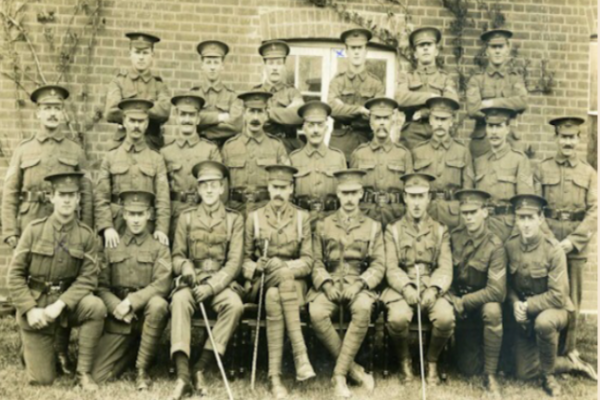 ​Officers and NCOs A Company, Mount Nessing George Davis appears back row, 4th from the left 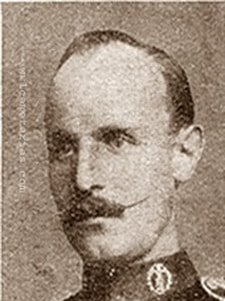 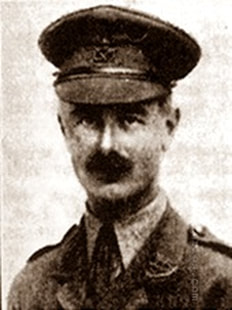 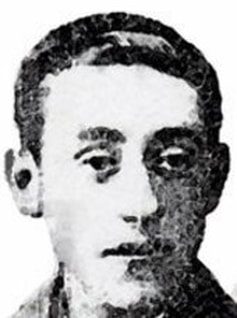 Husband of Jessie Francis Walsh (formerly Dixon), of 6, Peter St., Bolton.
​
He was born in Burnley in 1885 and son of William and Nellie Dixon, and was married in Bolton at St Matthews Church in 1908 to Jessie Francis, nee White, She also lost her brother the same year so it was a double tragedy for her and the family. 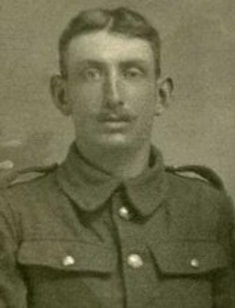 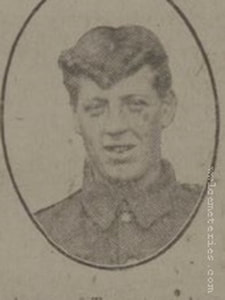 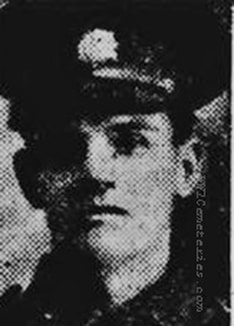 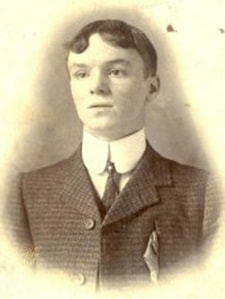 Private 3958 George Henry Eyers 2nd/7th (Birmingham) Battalion Royal Warwickshire Regiment was born 1886 in Birmingham. He volunteered to go to war in 1914 and fought at Neuve Chappelle, Festubert, and Givenchy before being reported missing presumed dead on 25/09/1915 the first day of the battle of Loos; regimental records indicate that after 'going over the top' at 06.00 hrs the regiment were fighting towards the Hulluch quarries which can still be seen today. LIke so many who sacrificed their lives, he was never seen again. He has no known grave.

George left a wife, and young daughter Minnie Eyers later to become Minnie Taylor my Grandmother on my fathers side. A photo of George taken before he enlisted aged around 22 is the only record we have of him, along with his medals, five postcards sent from the front written in pencil, and a 'Dead Mans Penny'' with his name on.
It would be nice to remember the life that he gave in order that his family could remain free. 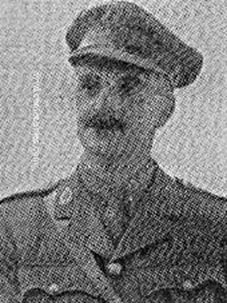 Son of Arthur and Emma Faulks, of Sparrow Hill, Loughborough.

My great uncle Edgar was the son of Arthur & Emma Faulks of Sparrow Hill, Loughborough. He qualified as a doctor via Nottingham University and Guy's Hospital and worked at the London County Asylum, Bexley, Kent. He joined the R.A.M.C. in June 1915. 21st Division was hurriedly committed to action shortly after its arrival in France on the second day of the battle of Loos, 26th September 1915.

Lieutenant Edgar Faulks met his death while he had been attending to the wounded all the morning of Sunday September 26th, and was well in the fire zone. Lieutenant G. T. Dacton of the Regiment to which Dr. Faulks belonged, writing to Mr. A. Faulks said:
​
"It was between two and three o'clock on the afternoon of Sunday September 26th. We were having a rough time, being heavily shelled. Faulks did sterling work with the wounded. He was attending a wounded gunner by one of the guns when he was hit through the chest. He said I've got it this time, and then collapsed. It must have been through the lungs. I suppose for he died in about 30 seconds or less. It was a good death in the act of doing his duty. I buried him close to where he fell by the side of a rough road, which runs from Vermelles to Loos."
​
Picture and information courtesy of great nephew, Chris Robinson 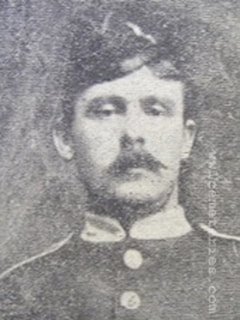 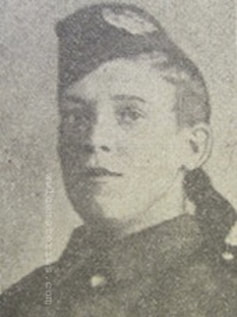 Known as "Bob," he was killed on the first day of the Battle of Loos, his friend and fellow member of the 10th Cameronians, Albert Bridge wrote the following letter to Bob's parents;

"It was on September 25th we made the advance on the German trenches. We had only just got over the parapet and extended out when a shell came and burst among our section, and Bob must have been killed then, as he was never seen after. He is a great loss to his platoon, as he was a good soldier and a cheery sort of fellow. We spent many a happy hour together with the rest of the Burnley lads. We have to pay the price of victory, and I am sorry to say that Bob was one of the unlucky ones. My comrades as well as myself send their deepest sympathy for the loss of your son."


Sadly, Albert Bridge would be killed in August 1916, he is buried in Contalmaison Chateau Cemetery 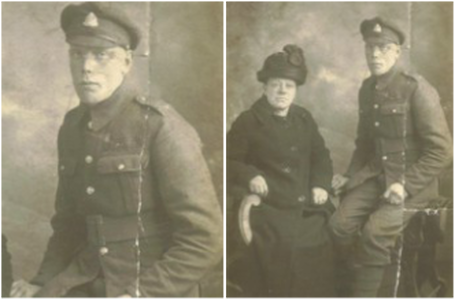 Son of the late Mr. and Mrs. Fullerton.

He is shown sitting with his mother Flora Fullerton (nee Mills). William was blown up on 23rd April 1918 at the age of 19 years. He is remembered on the Loos Memorial. May he rest in peace. 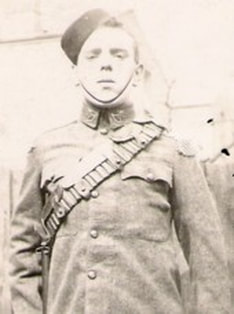 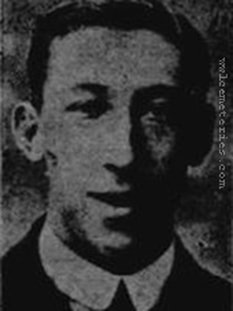 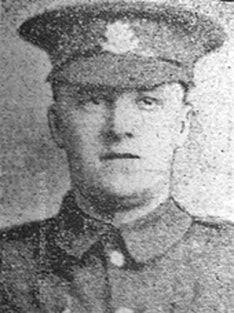 Son of the late Jack and of Harriet Ann Gough, of 7, Temple St., Nelson; husband of Jane Gough, of 2c, Palace St., Burnley.

Enlisted October 24th, 1916, prior to which he worked as a joiner for Clegg Bros., Blakey Street. He was married with one child. 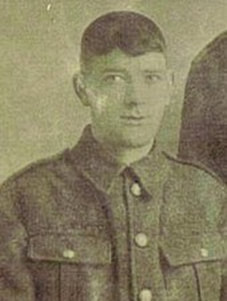