The Loos Memorial forms the sides and back of Dud Corner Cemetery.

Loos-en-Gohelle is a village 5 kilometres north-west of Lens, and Dud Corner Cemetery is located about 1 kilometre west of the village, to the north-east of the D943, the main Lens to Bethune road.

The Panel Numbers quoted at the end of each entry relate to the panels dedicated to the Regiment served with. In some instances where a casualty is recorded as attached to another Regiment, his name may alternatively appear within their Regimental Panels. Please refer to the on-site Memorial Register Introduction to determine the alternative panel numbers if you do not find the name within the quoted Panels.

The Commonwealth War Graves Commission would like to apologise for any inconvenience caused to visitors, whilst panel number 139 is being replaced on the memorial wall

Dud Corner Cemetery stands almost on the site of a German strong point, the Lens Road Redoubt, captured by the 15th (Scottish) Division on the first day of the battle.

The name "Dud Corner" is believed to be due to the large number of unexploded enemy shells found in the neighbourhood after the Armistice.

The Loos Memorial commemorates over 20,000 officers and men who have no known grave, who fell in the area from the River Lys to the old southern boundary of the First Army, east and west of Grenay. On either side of the cemetery is a wall 15 feet high, to which are fixed tablets on which are carved the names of those commemorated. At the back are four small circular courts, open to the sky, in which the lines of tablets are continued, and between these courts are three semicircular walls or apses, two of which carry tablets, while on the centre apse is erected the Cross of Sacrifice.

The memorial was designed by Sir Herbert Baker with sculpture by Charles Wheeler. It was unveiled by Sir Nevil Macready on 4 August 1930. 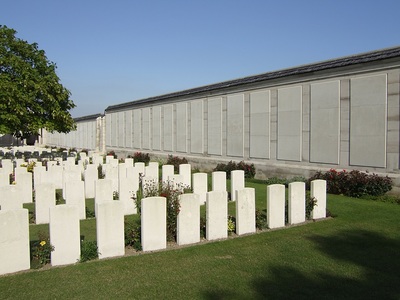 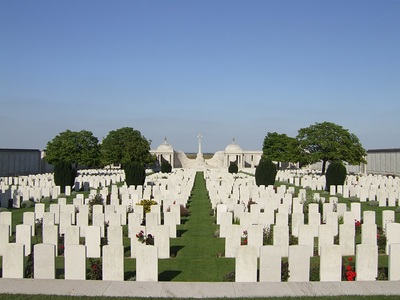 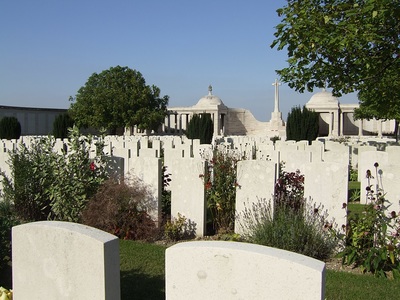 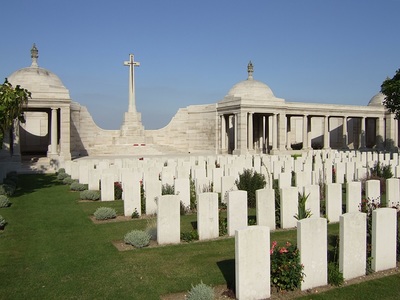 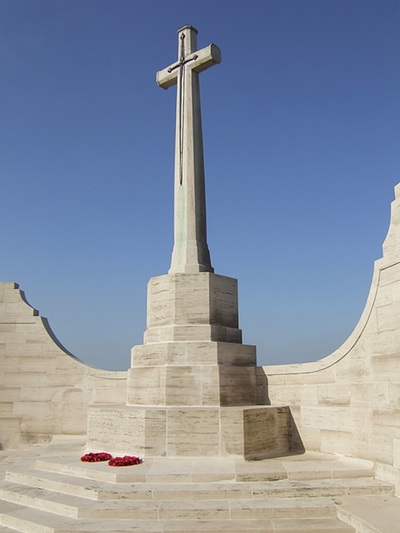 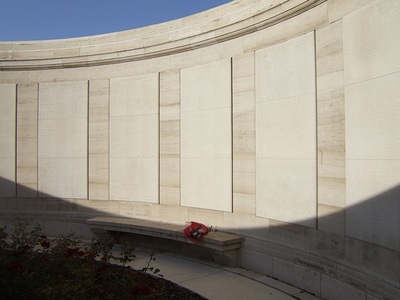 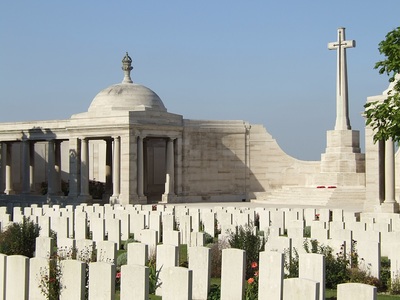 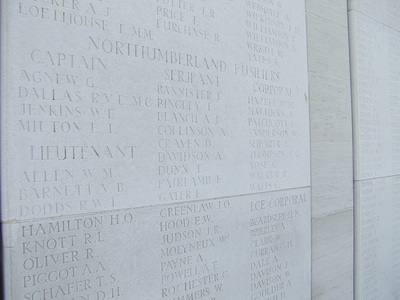 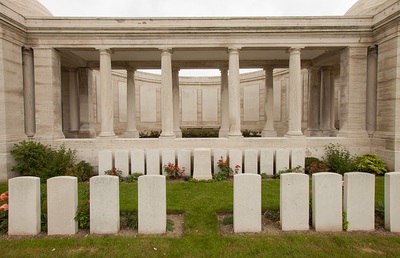 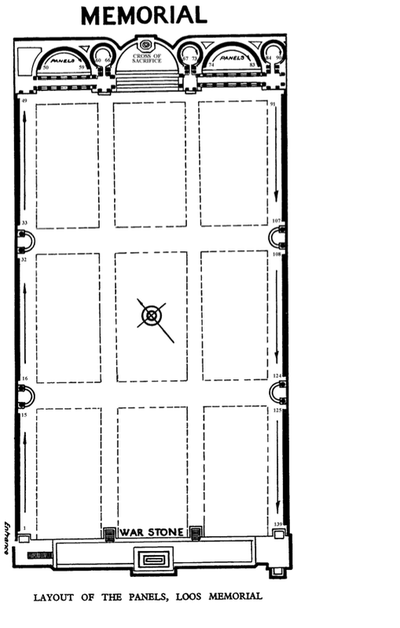 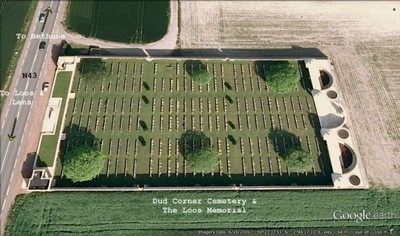 February 1918: A panorama of Loos, showing on the left the road leading to Crucifix Dump. In the centre of the picture is Loos Crassier with Hill 70 in the background is Fosse 121, Cite St. Pierre.

​
Citation: An extract from The "London Gazette," dated 18th Nov., 1915, recorded the following:-"For most conspicuous bravery and devotion to duty when commanding his battalion during operations on 25th and 26th September, 1915, on Hill 70. On the 26th, when the battalions on his right and left had retired, he rallied his own battalion again and again, and led his men forward four times. The last time he led all that remained, consisting of about fifty men, in a most gallant manner and was killed at their head. It was mainly due to his bravery, untiring energy and splendid leadership that the line at this point was enabled to check the enemy's advance."


Citation: An extract from "The London Gazette", dated 18th Nov., 1915, records the following:-"For most conspicuous bravery near Hulluch on 25th Sept., 1915. During very heavy fighting, when our front line was compelled to retire in order to re-organise, Pte. Peachment, seeing his Company Commander, Captain Dubs, lying wounded, crawled to assist him. The enemy's fire was intense, but, though there was a shell hole quite close, in which a few men had taken cover, Pte. Peachment never thought of saving himself. He knelt in the open by his Officer and tried to help him, but while doing this he was first wounded by a bomb and a minute later mortally wounded by a rifle bullet. He was one of the youngest men in his battalion and gave this splendid example of courage and self-sacrifice."

Born Parkhills, Fishpool, Bury, Lancashire on 5th May 1897. His parents were George Henry and Mary. Educated at Parkhills United Methodist Church School. St, Chad’s and Bury Technical School. He was an apprentice fitter engineer at Ashworth & Parker of Elton, Bury and later another Bury firm J. H. Riley. George enlisted 18th April 1915, in 5th K.R.R.C falsely giving his age as 19 years and one month, although he was only 17 years and 11 months. He then went absent from 7.30p.m. on 2nd July until 8.10a.m. on 5th July 1915 and for this he was fined seven days pay. Eventually George transferred to the 2nd Battalion on posting to France 27th July 1915. He was later confined to barracks for three days on 19th September 1915, for having a dirty sword (bayonet) whilst on guard mount parade.

George Peachment won  his VC near Hulluch, France on 25th September 1915, and his citation appeared in The London Gazette of 18th November 1915.He had been killed in action at Hulluch, France on 25th September 1915 during the action for which he won his medal and is commemorated on the Loos Memorial. George was unmarried and the VC was presented to his mother by the King at Buckingham Palace on 29th November 1916
.
The officer saved by George Peachment was Captain Guy Rattray Dubs. He was born in 1890 and commissioned in the K.R.R.C on 15th July 1910. he became a temporary Captain on 10th September 1914 and Captain 9thNovember 1915. Later awarded the Military Cross and French Croix de Guerre. He was Brigade Major of 140th Infantry Brigade from July 1917 to May 1918. He was promoted Brevet Major 3rd June 1918, and attended Staff College in 1926, Promoted Major 21st October 1928 and retired from the Army about 1930.
​
The 2nd K.R.R.C suffered particularly badly in an attack and, having failed to break into the enemy positions, was ordered to reorganise in the front line. As Rifleman Peachment retired he saw his company commander, Captain G. R. Dubs, lying wounded. The enemy fire was intense but in spite of this Peachment crawled to the officer’s assistance. Ignoring the danger he knelt over Dubs to attend to his wounds. Peachment was wounded by a bomb splinter but continued his work even though he could have sheltered in nearby shell-holes. A minute later a rifle bullet fatally wounded him. He was one of the youngest soldiers in the Battalion.

Son of Frank and Ada Wearne, of The Manor Lodge, Worcester Park, Surrey.

​
Citation: An extract from The London Gazette dated 31st July, 1917, records the following:- "For most conspicuous bravery when in command of a small party on the left of a raid on the enemy's trenches. He gained his objective in the face of much opposition and by his magnificent example and daring was able to maintain this position for a considerable time, according to instructions. During this period 2nd Lt. Wearne and his small party were repeatedly counter-attacked. Grasping the fact that if the left flank was lost his men would have to give way, 2nd Lt. Wearne, at a moment when the enemy's attack was being heavily pressed and when matters were most critical, leapt on the parapet and, followed by his left section, ran along the top of the trench, firing and throwing bombs. This unexpected and daring manoeuvre threw the enemy off his guard and back in disorder. Whilst on the top of the trench 2nd Lt. Wearne was severely wounded, but refused to leave his men. Afterwards he remained in the trench directing operations, consolidating his position and encouraging all ranks. Just before the order to withdraw was given, this gallant officer was again severely hit for the second time, and while being carried away was mortally wounded. By his tenacity in remaining at his post though severely wounded, and his magnificent fighting spirit, he was enabled to hold on to the flank."

The Inscriptions from the Memorial © Geerhard Joos

February 1918: A view of the ruins of Loos showing the extent of the destruction wrought by the years of bombardment to which the town was subjected. Beyond the coal mine to the right is the famous Hill 70, in the capture of which the 3rd Australian Tunnelling Company was associated with the Canadians.
​Although many observers view the British successes at the Battle of Loos with cynicism, Major-General Richard Hilton, at that time a Forward Observation Officer, said of the battle in Philip Warner's 1976 book, The Battle of Loos (Wordsworth):

"A great deal of nonsense has been written about Loos. The real tragedy of that battle was its nearness to complete success. Most of us who reached the crest of Hill 70, and survived, were firmly convinced that we had broken through on that Sunday, 25th September 1915. There seemed to be nothing ahead of us, but an unoccupied and incomplete trench system. The only two things that prevented our advancing into the suburbs of Lens were, firstly, the exhaustion of the "Jocks" themselves (for they had undergone a bellyfull of marching and fighting that day) and, secondly, the flanking fire of numerous German machine-guns, which swept that bare hill from some factory buildings in Cite St. Auguste to the south of us. All that we needed was more artillery ammunition to blast those clearly-located machine-guns, plus some fresh infantry to take over from the weary and depleted "Jocks." But, alas, neither ammunition nor reinforcements were immediately available, and the great opportunity passed." 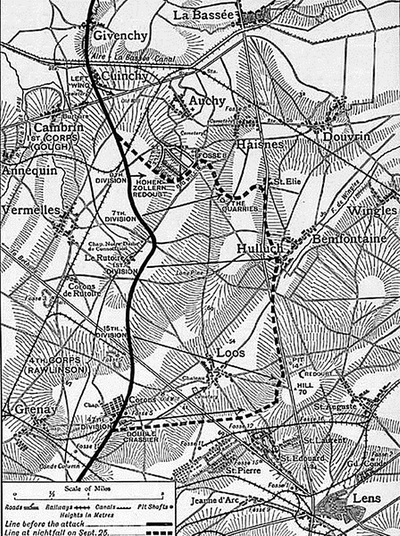 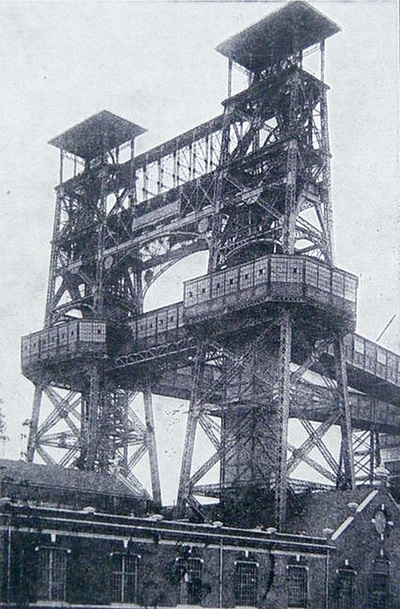 A view across to the distinctive mining village of Loos, dominated in the centre middle ground by the looming metal pit-head, known colloquially as 'Tower Bridge'. There are further mining structures to the right, all surrounded by houses and with a windmill in the centre left. The flat landscape in the immediate foreground is criss-crossed by a network of trenches. Drawn by Geoffrey K. Rose. © IWM (Art.IWM ART 4801)
Pictures in gallery below © Geerhard Joos 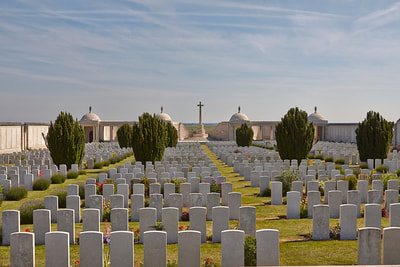 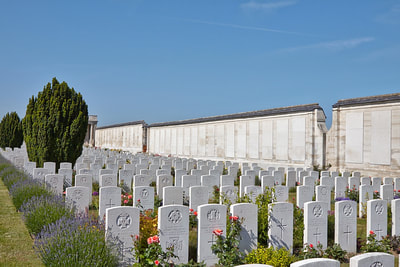 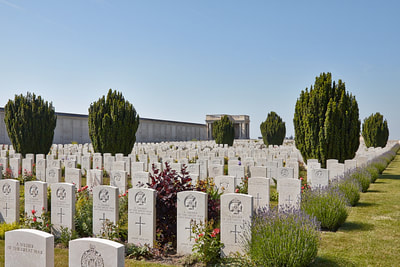 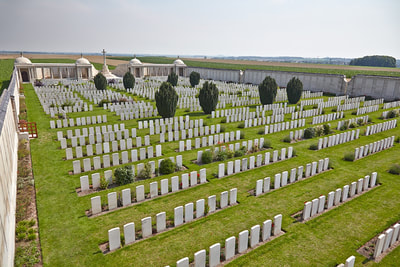 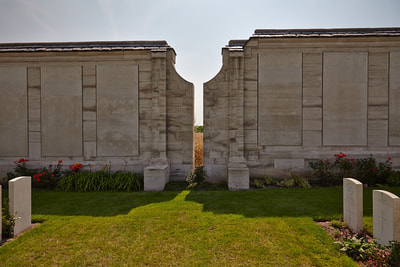 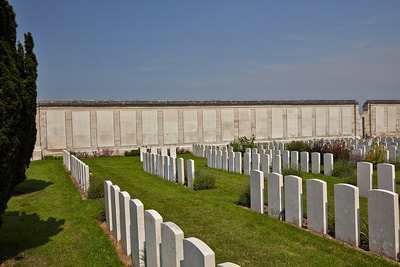 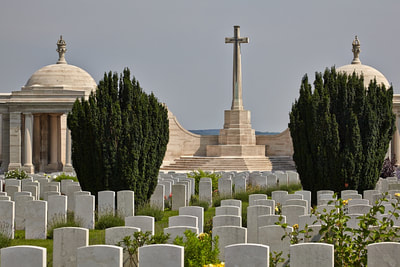 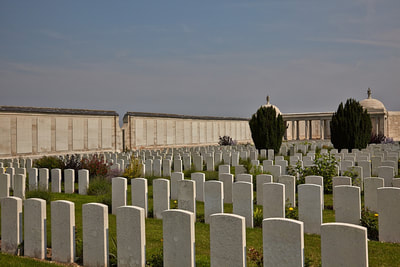 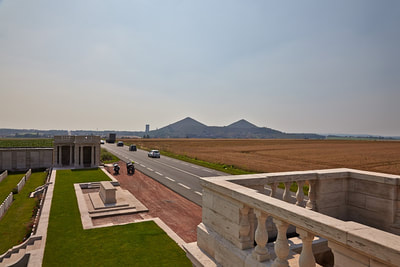 43499 Private Thomas Foulkes, 1st/10th Bn. Manchester Regiment, executed for desertion on 21st November 1917, aged 21. Panel 103. Son of Thomas and Ellen Foulkes, of 2, Mazzini Street, Everton, Liverpool. No details of his offence are available, but an account of his execution — from a dubious source — is mentioned at Putkowski, pp.217-218. 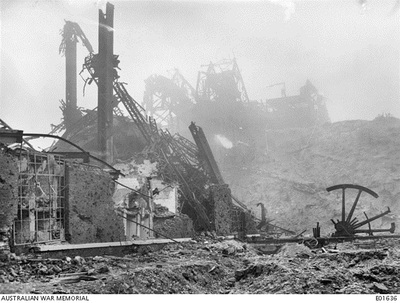 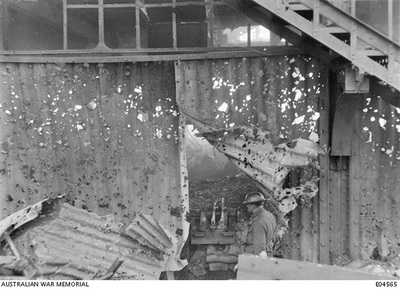 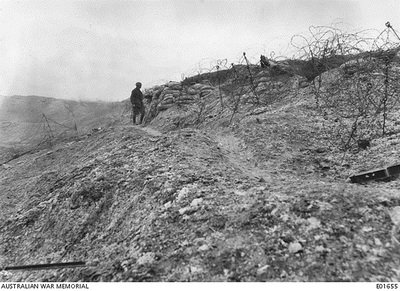 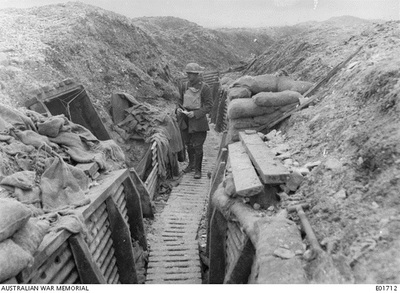 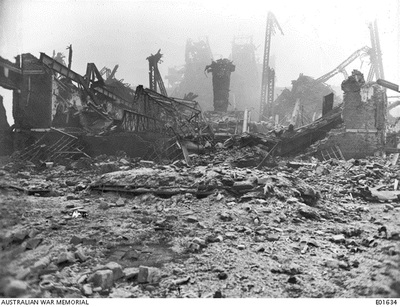 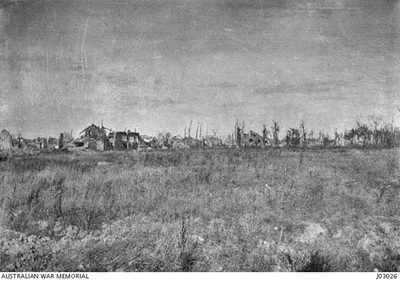 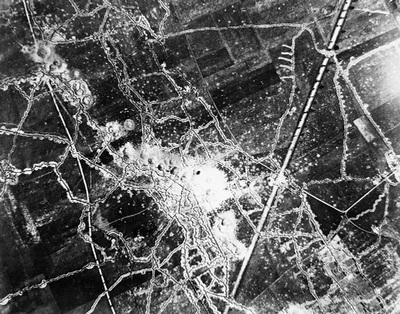 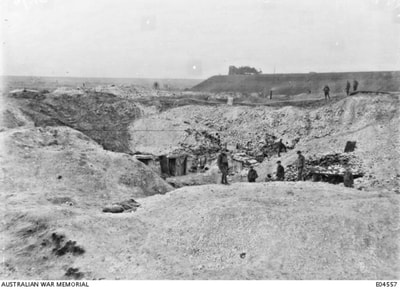