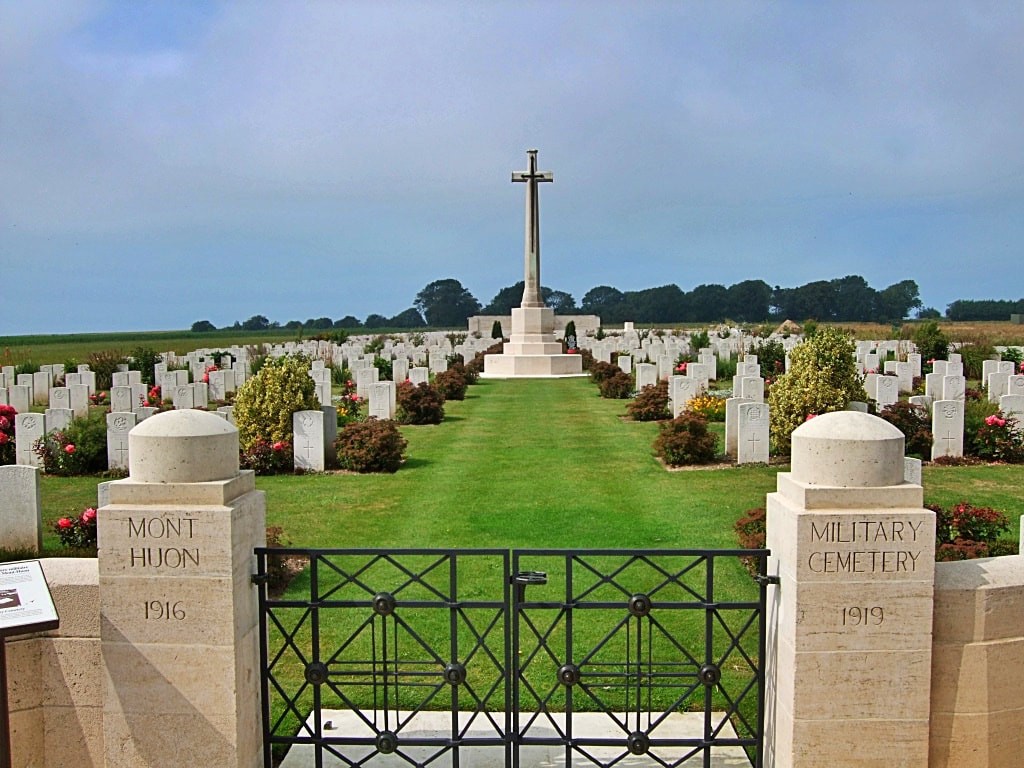 Le Treport is a small seaport 25 kilometres north-east of Dieppe. Mont Huon Military Cemetery is 1.5 kilometres south of the town. Go towards the centre of Le Treport and then follow the Littoral/Dieppe sign. The Cemetery stands on the D940.

During the First World War, Le Treport was an important hospital centre and by July 1916, the town contained three general hospitals (the 3rd, 16th and 2nd Canadian), No.3 Convalescent Depot and Lady Murray's B.R.C.S. Hospital. The 7th Canadian, 47th and 16th USA General Hospitals arrived later, but all of the hospitals had closed by March 1919.

As the original military cemetery at Le Treport filled, it became necessary to use the new site at Mont Huon.

There are now 2,128 Commonwealth burials of the First World War in the cemetery and seven from the Second World War. The cemetery also contains more than 200 German war graves. 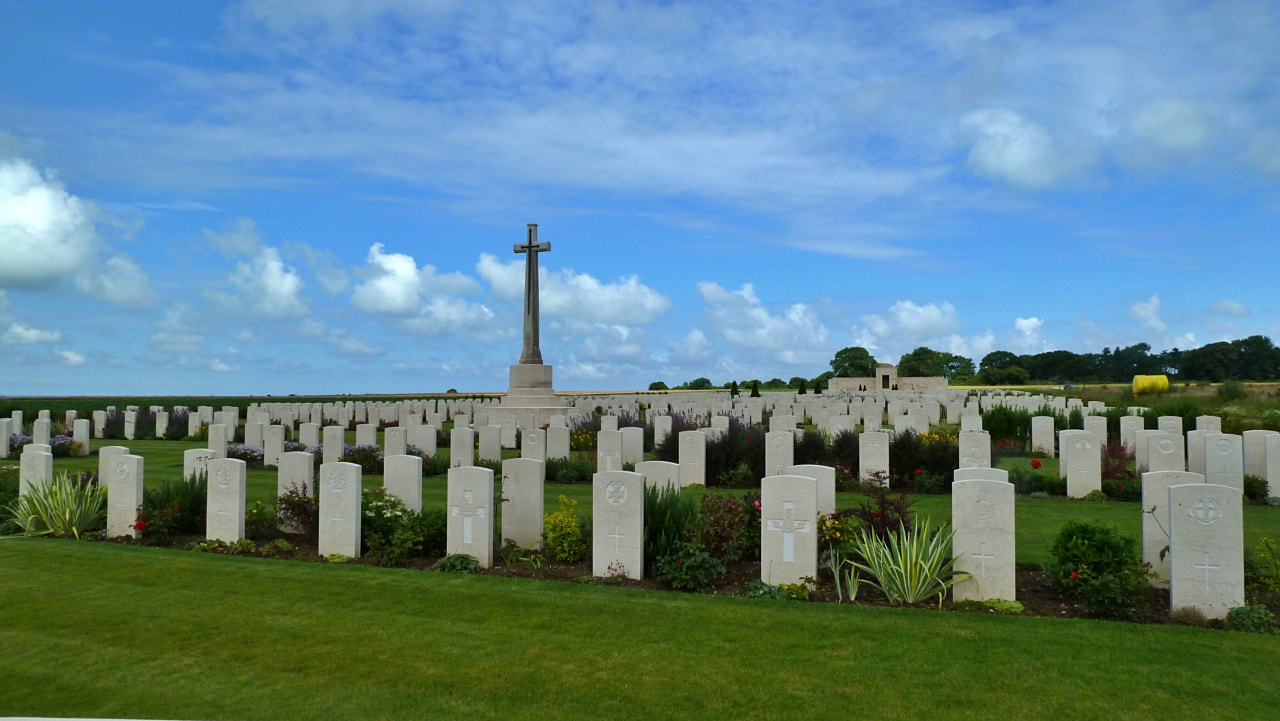 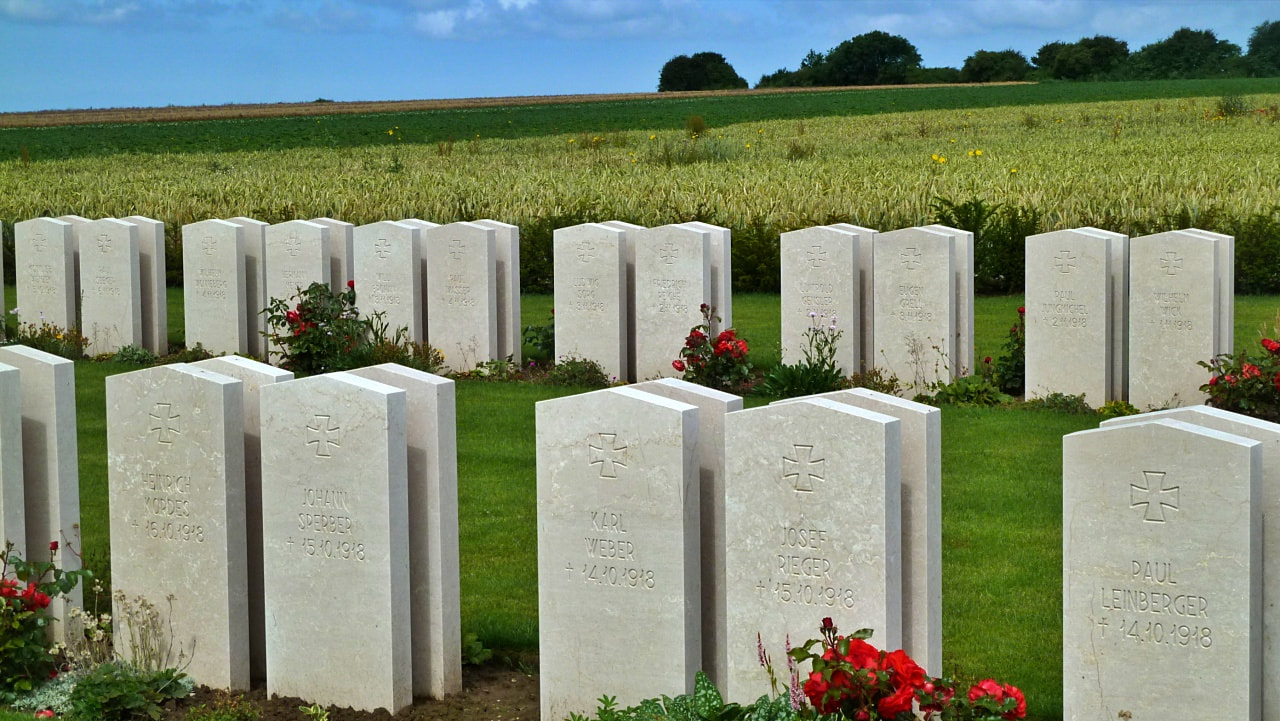 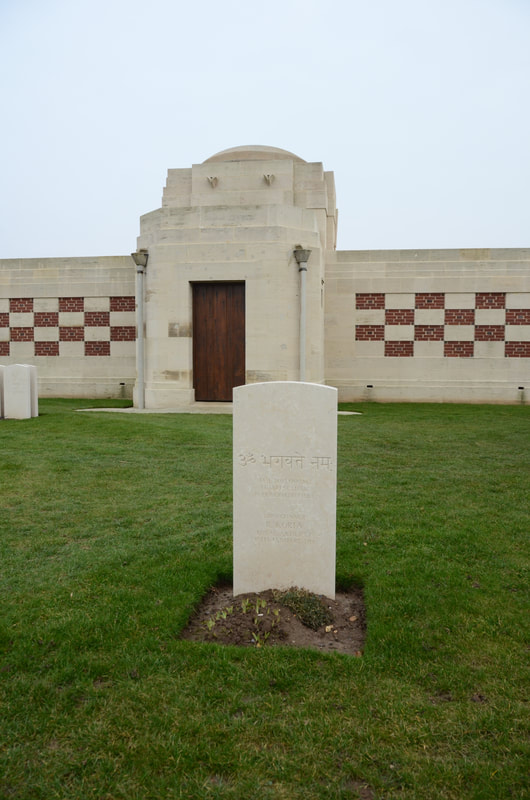 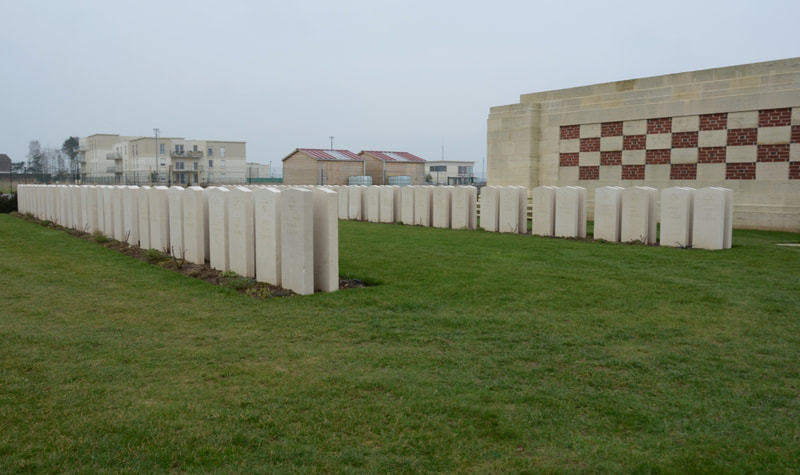 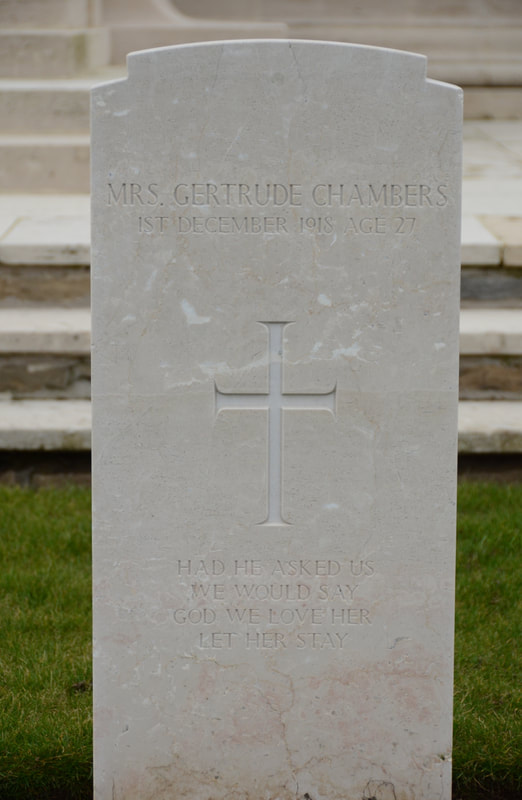 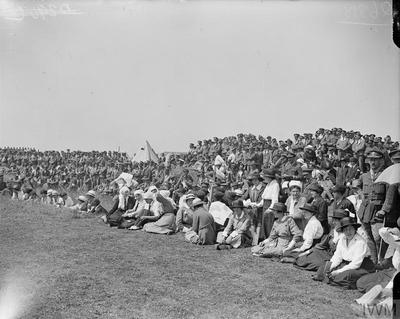 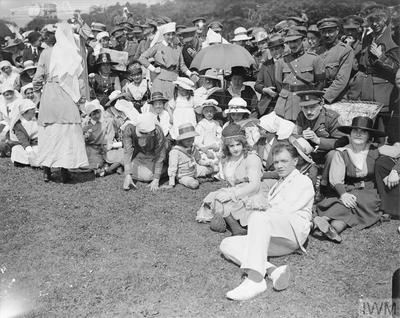 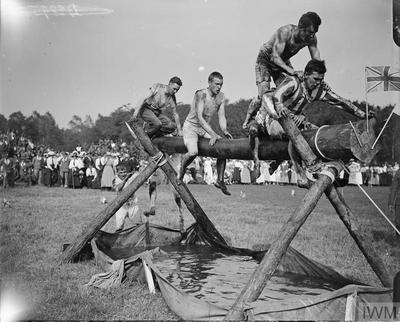 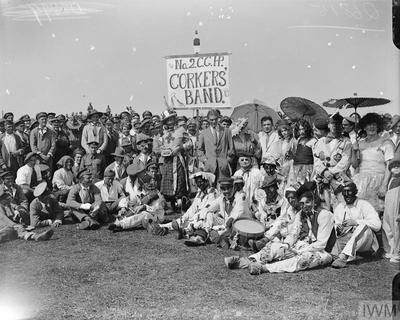 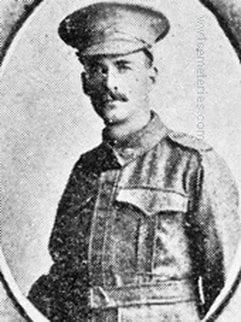 From Yankalilla, South Australia. A 26 year old labourer prior to enlisting on 1 September 1916, he embarked for overseas with the 7th Reinforcements from Adelaide on 6 November 1916 aboard HMAT Afric. Following further training in England, he joined the battalion in the field in France in July 1917 and was wounded in action at Broodseinde Ridge, Belgium on 19 October 1917. After being evacuated for medical treatment at the 3rd General Hospital at Boulogne, France, he died from his wounds on 19 December 1917 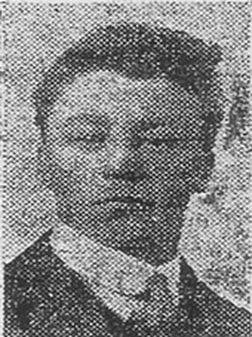 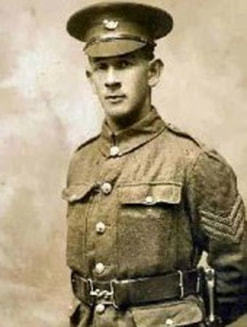 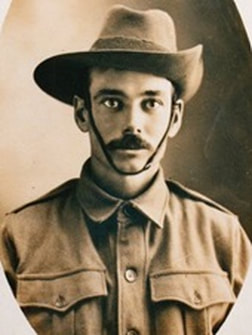 One of 5 sons and 3 daughters born to immigrant Irish parents, he and an elder brother were considered the best rough riders in the district of Tenterfield. He left behind a widow and two young sons, Charles Thomas Coghlan and the youngest, John Kitchener Coghlan born July 1915, a month after his father was dispatched overseas. 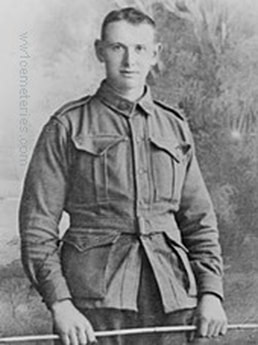 From Wollombi, NSW. A school teacher prior to enlistment, Pte Diplock embarked from Sydney with C Company on HMAT Afric on 18th October 1914. After transferring to the 1st Australian Light Trench Mortar Battery he was promoted to Corporal (Cpl) and on 8th October 1917 died of wounds received in action.

"This patient admitted 08.10.17. The notes state that he had wounds of the Epigastrium (Upper abdomen) and thigh (left) both wounds clean, but condition very bad. Pulse almost imperceptible, stimulative given, no reaction and that he died 9.20p.m. on 08.10.17. The day of admission." 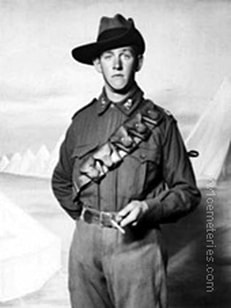 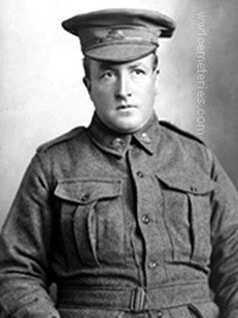 A seaman from Brunswick, Victoria prior to enlistment, Pte McQueen embarked with the 11th Reinforcements from Melbourne on RMS Malwa on 21 March 1916. Later transferring to the 6th Light Trench Mortar Battery he was one of a group who were awarded the Military Medal for “the gallantry and determination which they continued to serve their mortars throughout the day and night”. He was later promoted to Corporal and was wounded in action at Passchendaele Ridge. On 16 November 1917, aged 34, he succumbed to his wounds and was buried in the Mont Huon Military Cemetery, Le Treport, France. 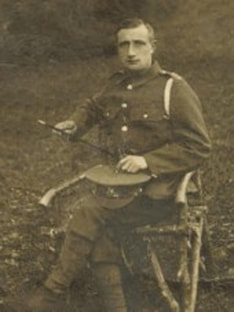 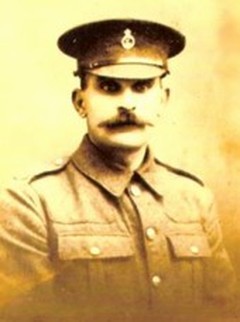 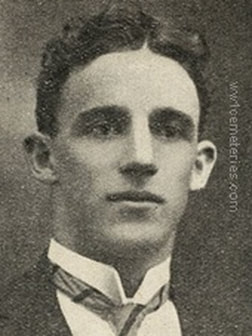 From Lidcombe, NSW. A blacksmith prior to enlisting, he embarked from Sydney aboard HMAT Argyllshire (A8) on 30 September 1915. He was wounded in action on 23 September 1917 at Menin Road, Belgium, and died of his wounds at the 2nd Canadian General Hospital, Le Treport, France on 24 September 1917, aged 23. 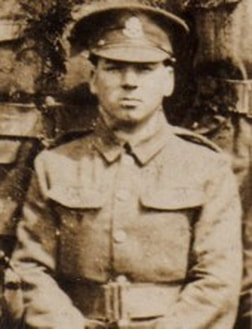 Son of William and Mary Peet, (they were his grandparents and were probably named as his guardians as his parents died when he was 12). Husband of Ada Peet, of 38, Oxford St., Church Gresley, Burton-on-Trent. 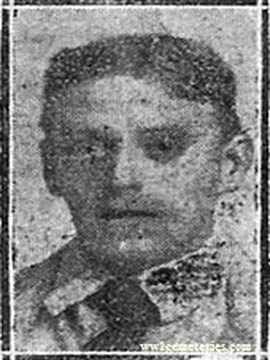 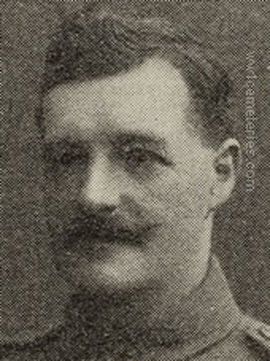 2048 Sapper (later Sergeant) George William Taylor, DCM, MM, 1 Field Company Australian Engineers of Annandale, NSW. An bricklayer prior to enlisting, he embarked from Sydney aboard HMAT Ballarat (A70) on 6 September 1915. He was wounded in action near his billet at Harbonnieres, France on 12 August 1918 and died of his wounds at the 3 General Hospital, Le Trepot, France on 19 August 1918, aged 40. He is buried in the Mont Huon Military Cemetery, Le Treport, France. Sgt Taylor was awarded the Distinguished Conduct Medal on 7 March 1918 for 'his splendid behaviour and initiative under extremely adverse conditions...' on 4 October 1917 during operations east of Ypres, and the Military Medal on 2 May 1918 for 'showing great courage digging out and attending casualties......' on 20 September 1917 during operations along the Menin Road.

Notes from No.3 General Hospital give the following information;

​"Sergeant Taylor was admitted to this hospital from 53 Casualty Clearing Station, on 16.08.18. Suffering from G.S.W. Leg Lt, Thigh Rt, Head, Chest and Arm Rt. He was very ill on admission, extremely anaemic and weak, no progress was made and patient died at 11.35p.m. on 19th August 1918." 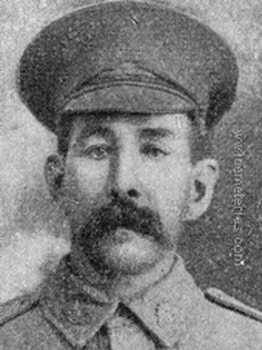 From Maryborough, Qld, son of George and Mary Ann Townley, of Gundurimba, via Lismore, NSW, (originally of Stepney, London). A labourer prior to enlisting on 13 September 1916, he embarked from Brisbane, Qld aboard HMAT Commonwealth (A73) on 28 March 1916. He died of disease on 9 January 1917 in France, aged 50. 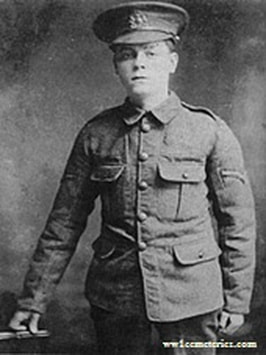 Son of Edward and Elizabeth Ann Walker, of Salford, Manchester 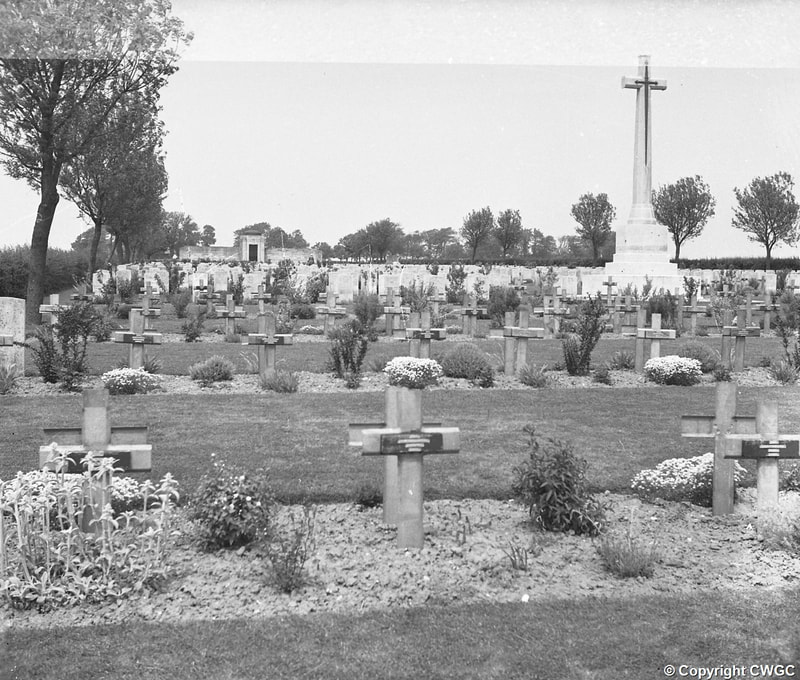 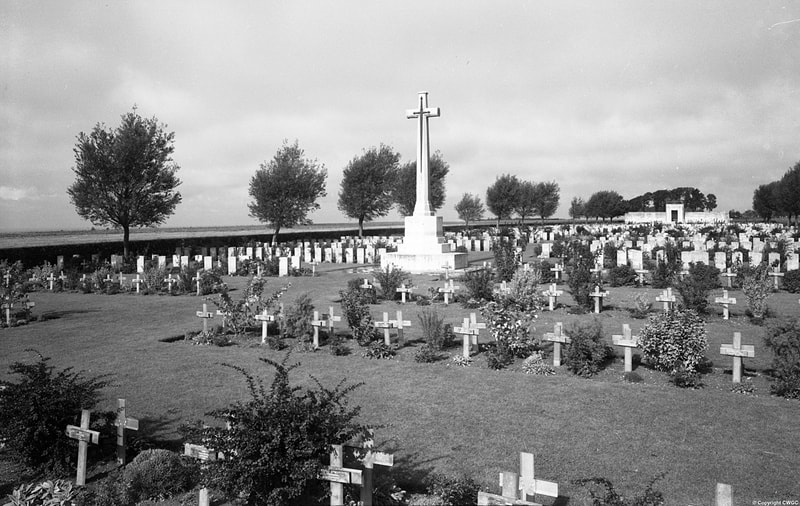 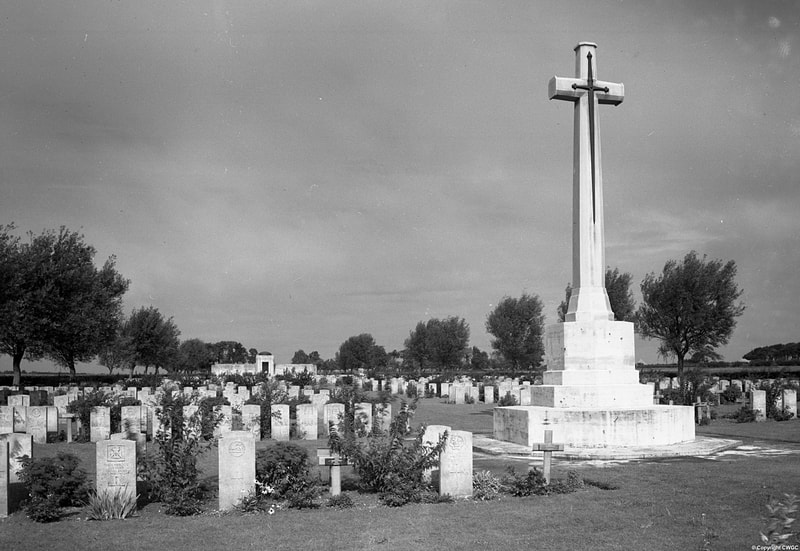