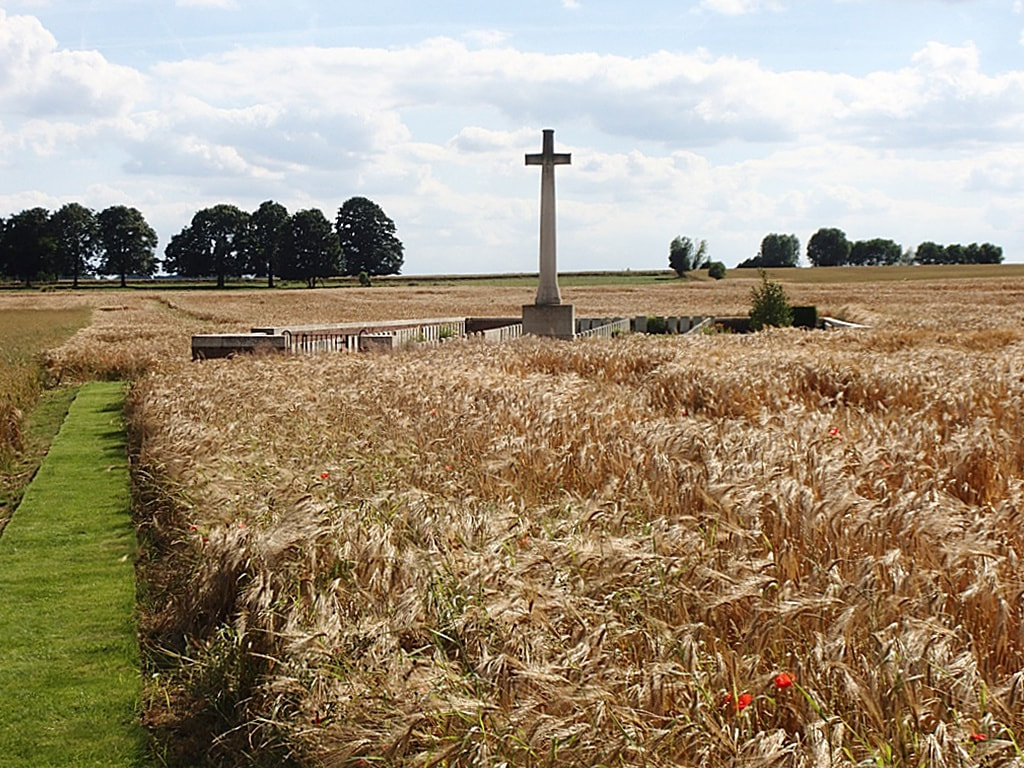 Morchies is a village 8 kilometres north-east of Bapaume and 2 kilometres north of the RN30 road from Bapaume to Cambrai. Leave the RN30 on the RD18 signposted Morchies, pass through the village and Morchies Military Cemetery can be seen clearly on the left. The signpost indicates an access path.

Morchies was occupied by British troops on the 20th March 1917; lost on the 21st March 1918; and retaken in September 1918. It was later "adopted" by the Urban District of Barking.

This cemetery contains the graves of 163 casualties of the First World War, 74 of which are unidentified and special memorials are erected to eight soldiers from the United Kingdom who are known to be buried among them. Other special memorials record the names of nine soldiers from the United Kingdom and one sailor of the Royal Naval Division, buried by the enemy at Morchies, whose graves were destroyed by shell fire. This cemetery also contains the graves of 13 German casualties of the First World War.

This cemetery was designed by W H Cowlishaw. 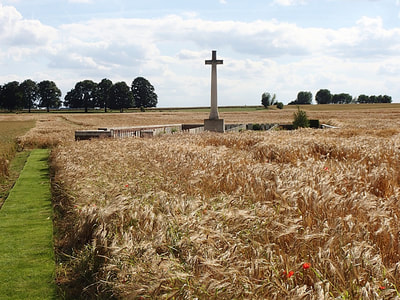 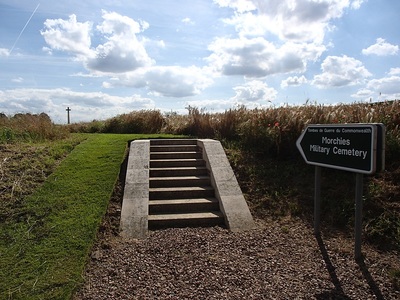 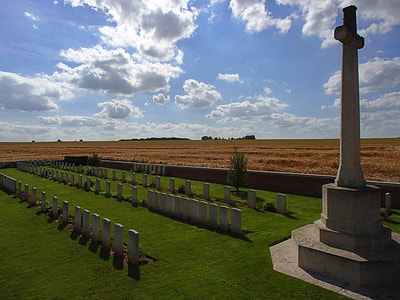 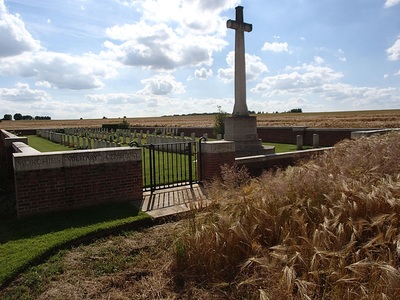 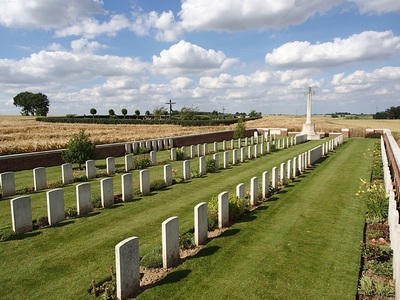 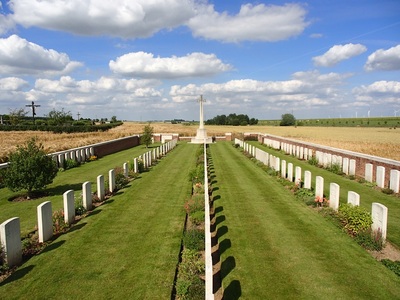 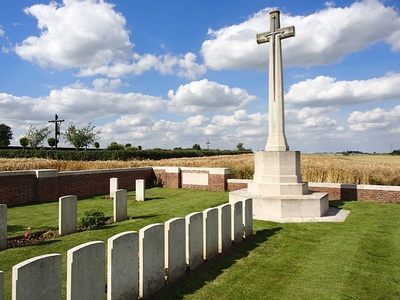 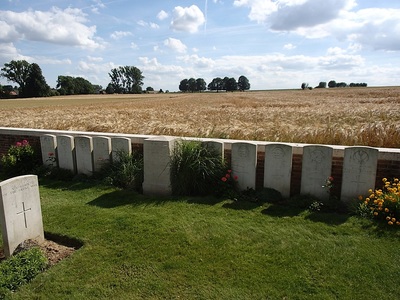 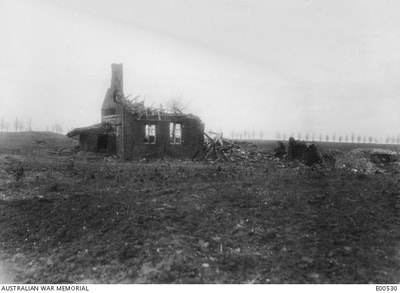 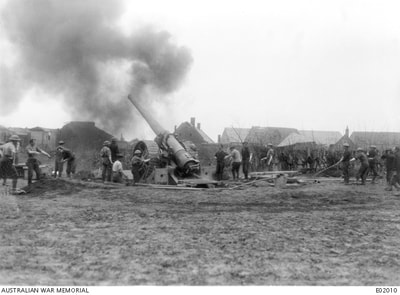 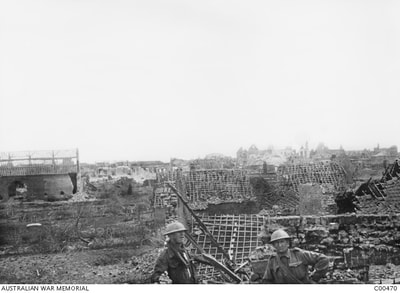 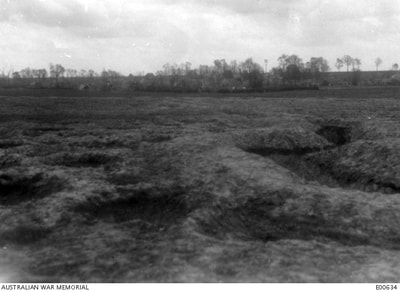 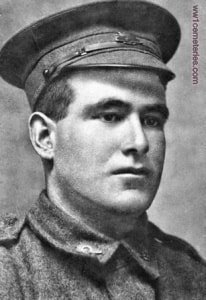 A contractor prior to enlistment, Pte Dadswell embarked with the 22nd Reinforcements from Melbourne on HMAT Ulysses on 25th October 1916. He was killed in action on 22nd April 1917 at Lagnicourt.

A 19 year old storekeeper's assistant prior to enlisting on 24 July 1916, he embarked of overseas with the 21st Reinforcements from Melbourne on 2 October 1916 aboard HMAT Nestor (A71). Following further training in England, he proceeded to France where he joined the 5th Battalion on 4 March 1917. Pte Ditchfield died on 29 April 1917 of wounds received in action.

Son of the late Edward and Eliza J. Thomson. Born at Abbotsforth, Victoria.

A printer from Abbotsford, Vic prior to enlistment, Pte Thomson embarked with the 18th Reinforcements from Melbourne on HMAT Ayrshire on 3 July 1916. On 4 May 1917, aged 21, he was killed in action.

"I was about 70 yards away from him when a shell fell close to him and I saw him fall. He did not move again. I was told by Cpl. Fogarty that he went up and examined Thomson and found him dead with the top of his head blown off. This occurred about the 18th or 19th of April near Lagnicourt."

His headstone bears the inscription; "The Lord Gave And The Lord Taketh Away."

A railway fireman prior to enlisting on 1 September 1916, he embarked for overseas with the 22nd Reinforcements from Melbourne on 25 October 1916 aboard HMAT Ulysses. After further training in England, he joined the 5th Battalion in France in March 1917 and died of wounds received in action on 29 April 1917 at Lagnicourt.

552A Private, Horace Rouse, 5th Battalion was involved in the accidental death of John Yates and six others;

​"I saw Jackie Yates killed (I believe instantaneously) one night about April 29th at Lagnicourt, when he was out on patrol.
I was on a post that night, and it had not been reported to me that any patrol had gone out. I enquired and was told "No." Then the Germans sent a barrage over, and as I saw a party coming across, I felt sure that it must be the enemy, and I reported what I had seen to our officer, Lt. G. L. Makin. He have the order to fire, and we fired. I saw Jackie Yates fall and watch him being carried in. He was buried in a cemetery in a little village near Lagnicourt, but I cannot remember the name. I was taking water up and saw the funeral going on. There was a chaplain and others up there, I have seen the grave several times, there is a cross put up." 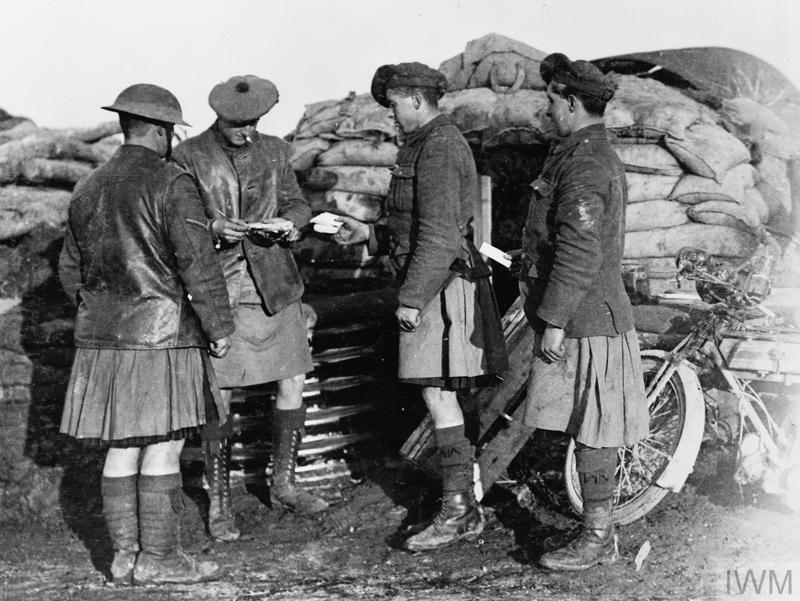