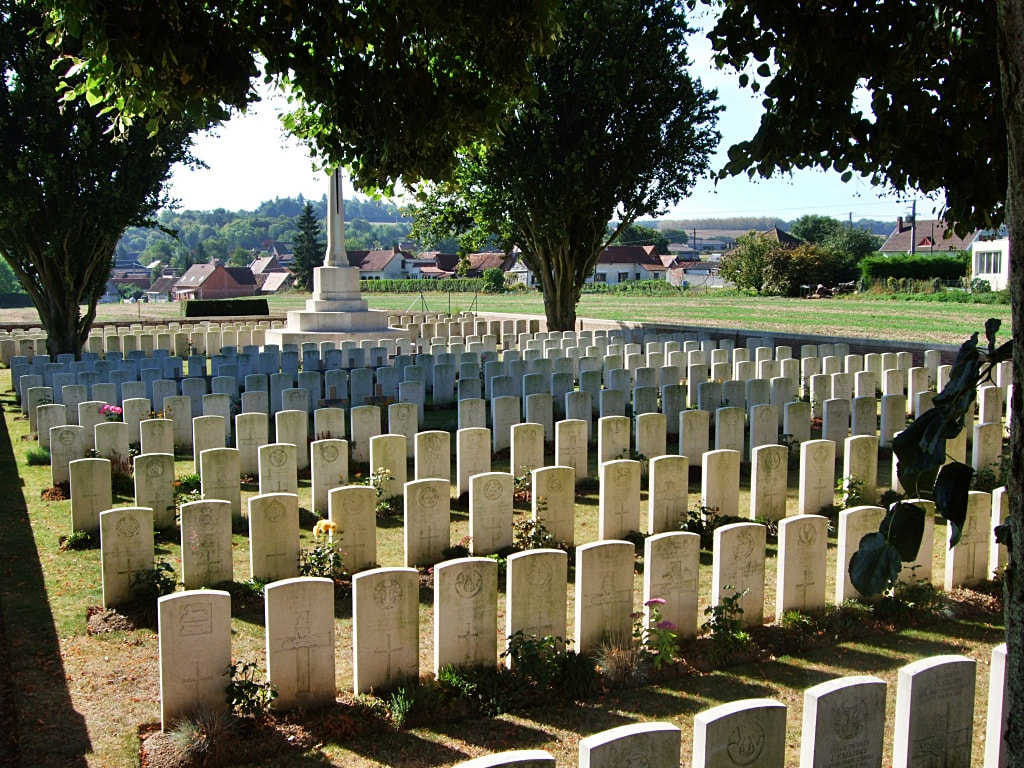 Namps-au-Val is a village in the Department of the Somme approximately 16 kilometres south-west of Amiens. The British Cemetery is between the village and the railway station.

At the end of March 1918, when the German offensive in Picardy began, the 41st, 50th and 55th Casualty Clearing Stations came to Namps-au-Val, remaining until the middle of April. Almost all the burials in the cemetery were carried out by them, but nine graves in Plot II, Row D, were brought after the Armistice from CONTY FRENCH MILITARY CEMETERY.

The cemetery contains 408 Commonwealth burials of the First World War and one from the Second World War. There are also 16 French war graves.

​"Once we knew, we never forgot you" 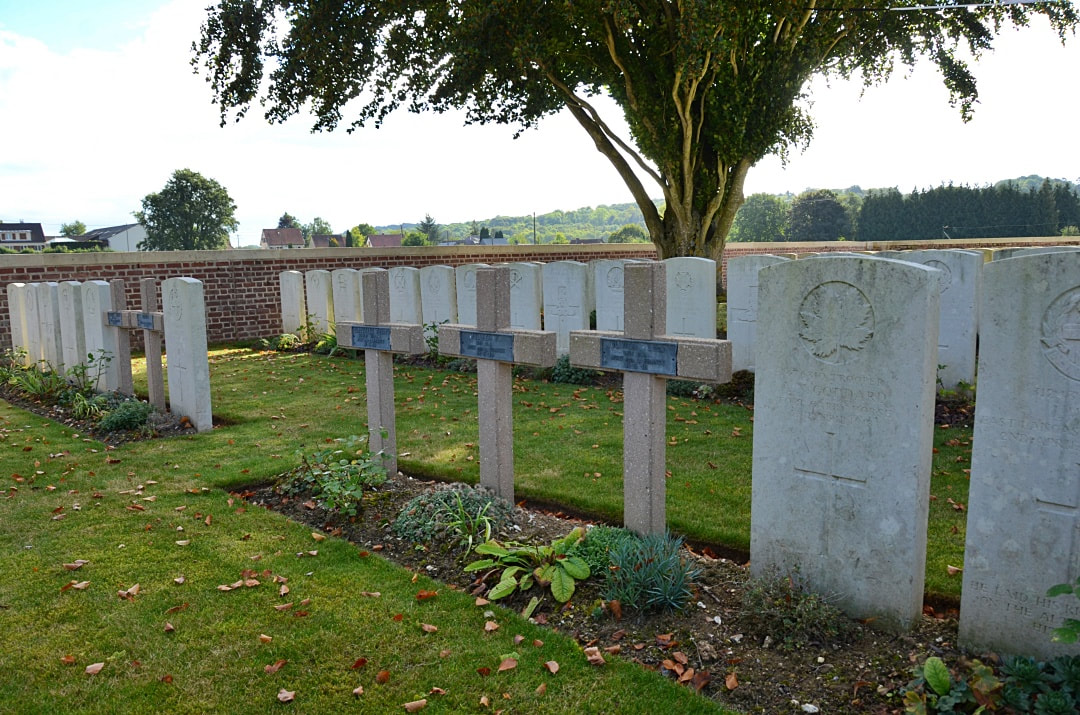 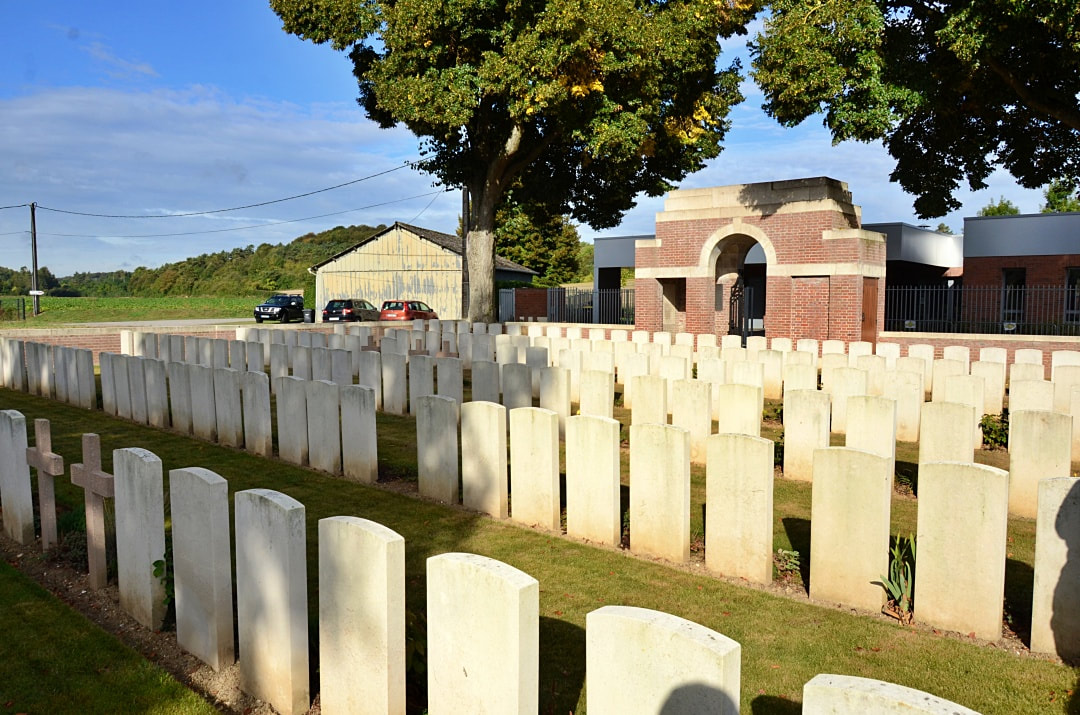 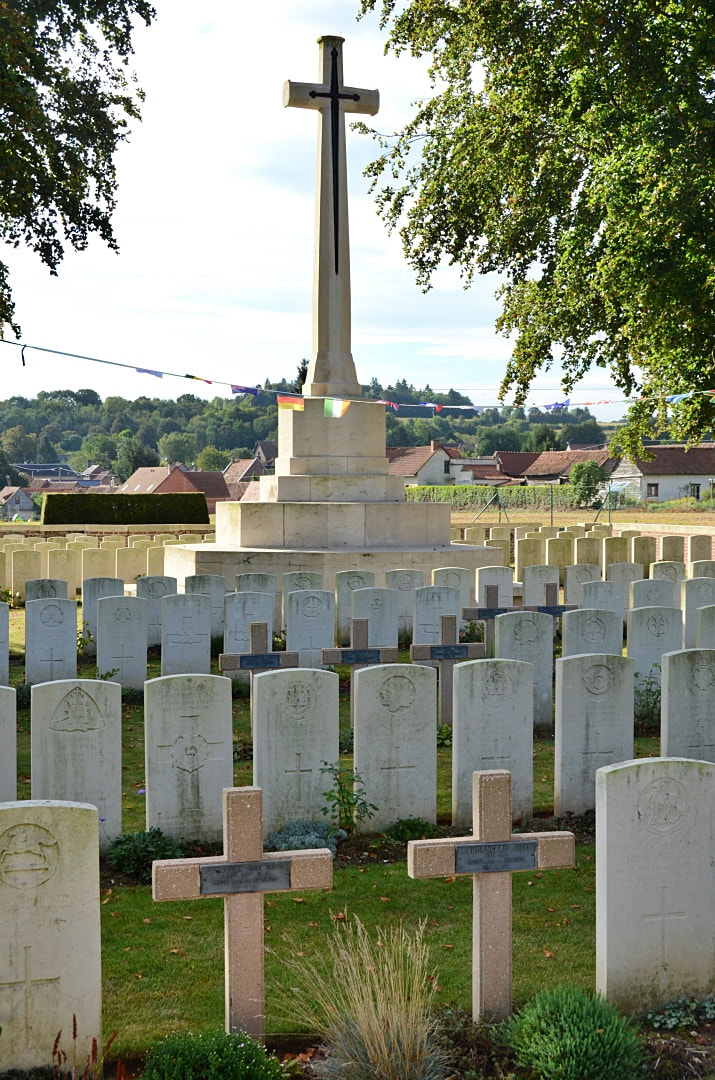 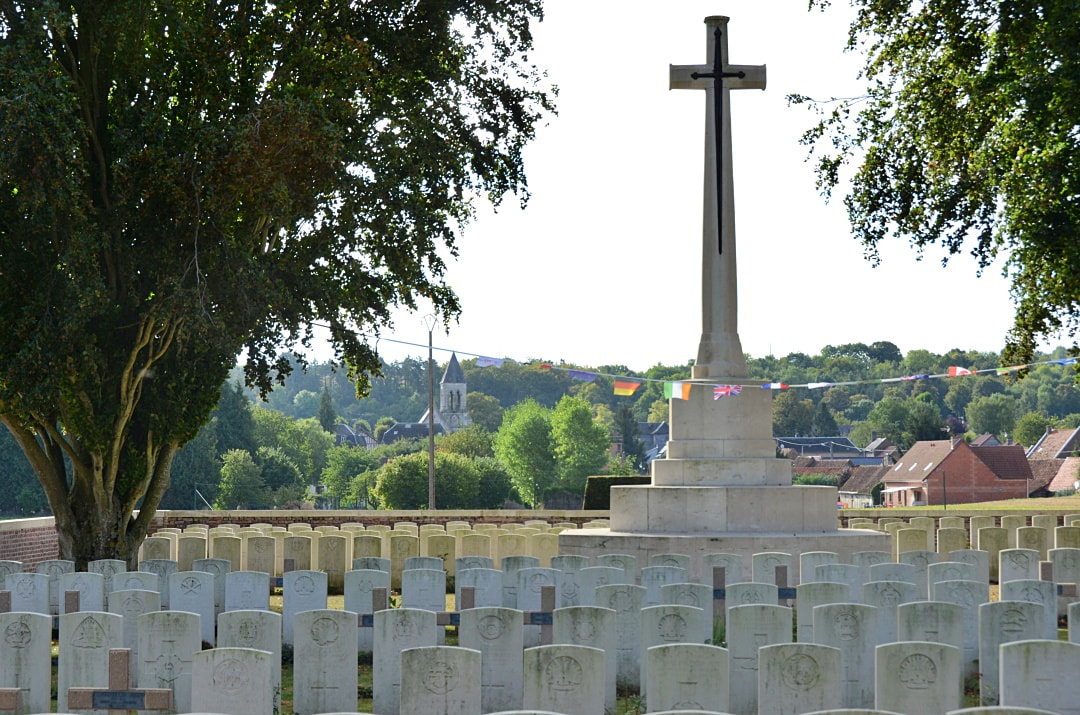 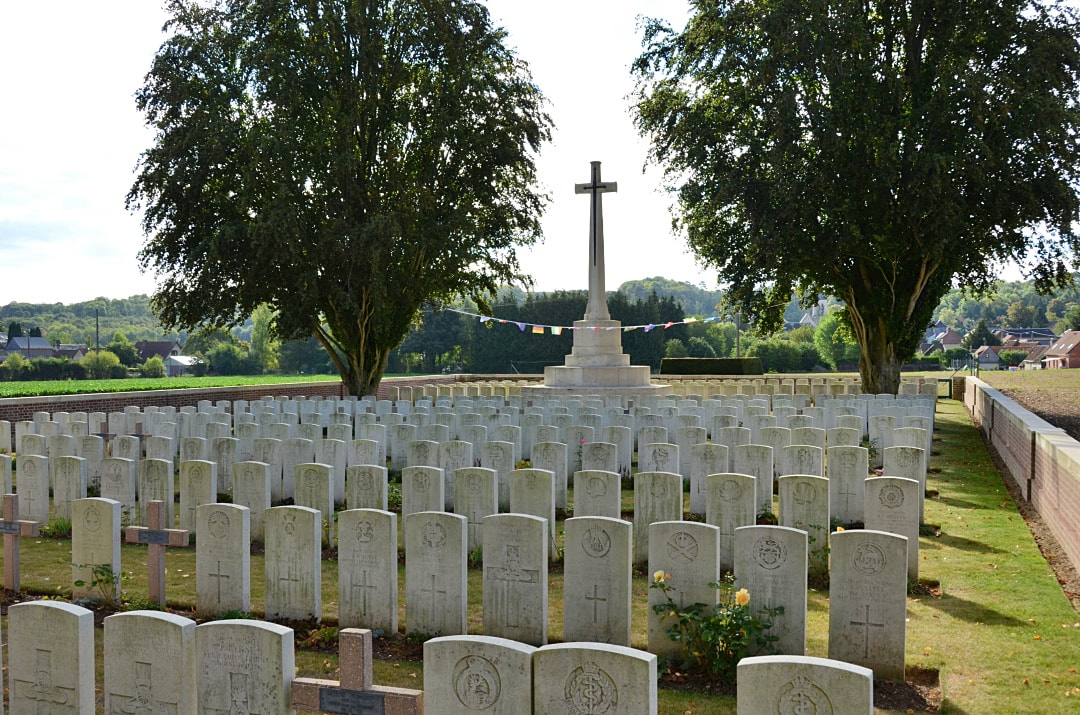 Son of Arthur J. B. and Hannah Flowerdew, of Billingford Hall, Scole, Norfolk.

His headstone bears the inscription: "Loved Son, Brother And Comrade."

Citation: An extract from the Second Supplement to the London Gazette, No. 30648, of 24th April, 1918, records the following: "For most conspicuous bravery and dash when in command of a squadron detailed for special service of a very important nature. On reaching the first objective, Lt. Flowerdew saw two lines of the enemy, each about sixty strong, with machine guns in the centre and flanks, one line being about two hundred yards behind the other. Realising the critical nature of the operation and how much depended upon it, Lt. Flowerdew ordered a troop under Lt. Harvey, V.C. to dismount and carry out a special movement while he led the remaining three troops to the charge. The squadron (less one troop) passed over both lines, killing many of the enemy with the sword; and wheeling about galloped at them again. Although the squadron had then lost about 70 per cent of its numbers, killed and wounded, from rifle and machine gun fire directed on it from the front and both flanks, the enemy broke and retired. The survivors of the squadron then established themselves in a position where they were joined, after much hand-to-hand fighting, by Lt. Harvey's party. Lt. Flowerdew was dangerously wounded through both thighs during the operation, but continued to cheer on his men. There can be no doubt that this officer's great valour was the prime factor in the capture of the position."
​ 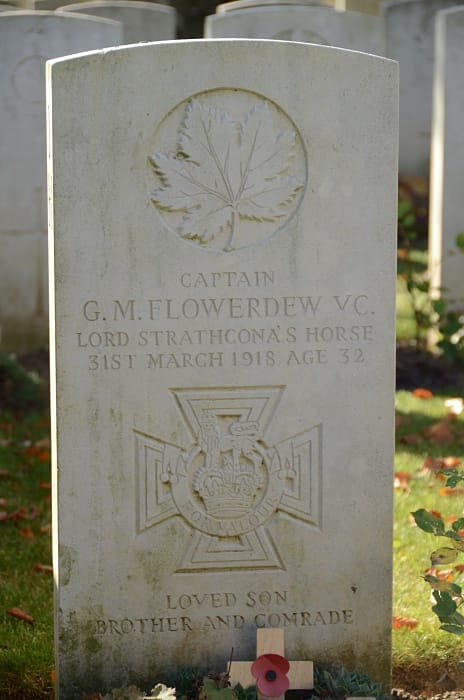 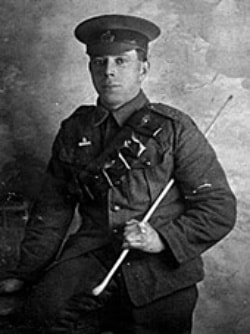 Son of William and Emily Anthony, of Longburton, Sherborne, Dorset. 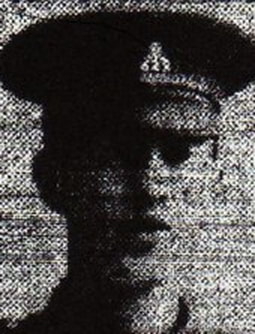 536557 Private
James Llewellyn Davies
2nd/2nd Northumbrian Field Ambulance, Royal Army Medical Corps.
31st March 1918
Plot I. B. 32.
​
Son of Mr. J. Davies, of Galwyn House, Curnann, Lampeter, Cardiganshire.
​
From Cwmann, Lampeter, Wales - he died in 1918 and is buried in France, in Namps-au-Val military cemetery.  He was the son of John and Jane Davies (my great-grandparents). 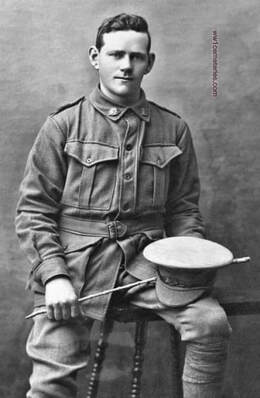 ​"I saw Erwin, "A" Coy., wounded by a M. G. burst through the stomach at Hangard Wood, March 30th, about 9.p.m. during a night counter attack. Lieut. Button (Since dead) and two or three others took back the wounded. Erwin was conscious but in great pain when I left. I don't know where he died." 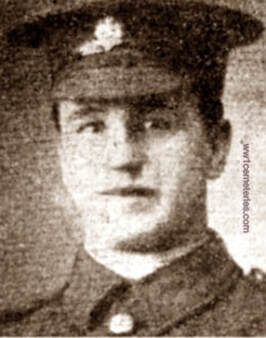 A reservist, he was working as a weaver at Ferndale Mill, Burnley prior to joining up.

His family placed this tribute in the local paper on 4th May 1918;

"He sleeps beside his comrades
In a hallowed grave unknown,
But his name is written in letters of love
In the hearts he has left at home,
May the heavenly winds blow softly
O'er that sweet and hallowed spot
Though the sea divides his grave and us
He will never be forgot." 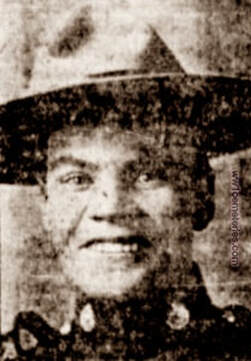 ​His headstone bears the inscription; "He Gave His Life That Others Might Live." 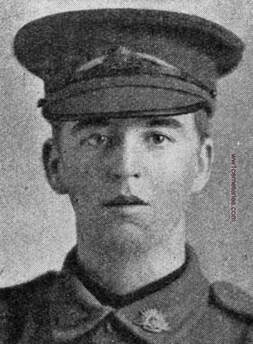 His headstone bears the inscription; "There Is A Lonely Grave In France Where A Brave Young Soldier Sleeps"

From Auburn, NSW. A fitter prior to enlisting, he embarked from Sydney aboard HMAT Ascanius (A11) on 25 October 1916. He was wounded on 9 April 1918 when a shell struck the camp kitchen at Gentelles, France. He died later that day at the 41st Casualty Clearing Station, France, aged 20.

​"Private Maguire was admitted to the 41st C.C.S. on 9.4.18. suffering from shell wounds - head, which were received in action. He was buried in the military cemetery at Namps-au-Val but I am unable to give the number of his grave." 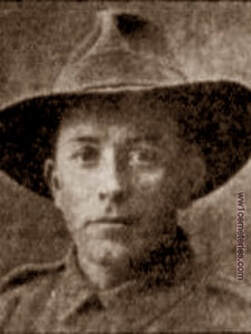 ​His headstone bears the inscription; "Youngest Son Of John And Jessie Mclellan Of Glasgow"

2866 Private R. D. Arthur gave the following description of the fatal wounding of Charles McLellan by an Australian Military Policeman;

"I saw him at Corbie immediately after he had been shot through the side of the nose by one of our own M.P.'s. It appears that a man named Styles of the B. Company Battalion; Pioneers had been in trouble with the police the night before. Seeing the police the next morning, Styles threatened to shoot them but when he went into a room in the house where we were billeted, he was prevented by coming out by Fred Hendricks M.M., but was able to shove the end of his rifle through the side of the door. When the police, who were some distance away saw this, they fired and unfortunately, McLellan who was standing on the footpath, was hit by the bullet. He lived a few minutes after and spoke a few words to someone attending him. I do not know where he was buried."

​As a footnote to this tragic story, it appears from official reports at the time that the incident was "Hushed up" and Charles McLellan's family were told that he had died of shell wounds.

There was a man named Percy Style (4884) of the 50th Battalion, he would eventually return to Australia in July 1919. 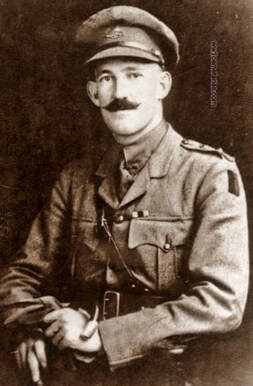 ​His headstone bears the inscription; "In The Lord Put I My Trust Psalm 11.Ver.1"

4497 Lance Corporal, J. N. Gishens gave this description of the incident in which David McConaghy was fatally wounded;

"On April 9th, just before Fritz broke thro' at Villers-Bretonneux. We were holding the line in trenches outside that village. The colonel was killed by a shell in the morning at the Battalion Headquarters, which were in the trenches. He lived about 3 or 4 hours, had a leg and two arms blown off. I did not see his death but I saw him carried out for burial next morning." 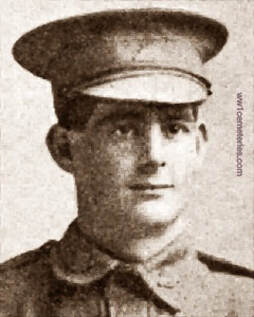 From Lidcombe, NSW. A station hand prior to enlisting, he embarked from Sydney aboard RMS Osterley on 10 February 1917. He was wounded in action near Villers-Bretonneux, France, on 4 April 1918. He died of his wounds at the 41st Casualty Clearing Station, France on 6 April 1918, aged 22. 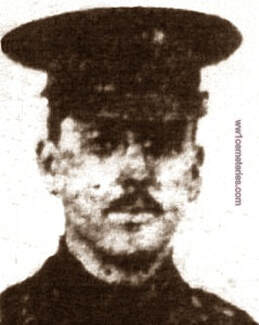 His headstone bears the inscription; "He Was My All. Worthy Of Everlasting Remembrance." 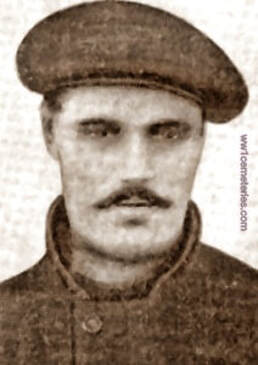 Son of William and Alice Maud Stevens, of Cunnamulla, Queensland.

​His headstone bears the inscription: "In Life We Loved You Dearly In Death We Do The Same." 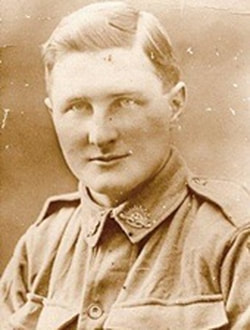 1744 Sergeant
Norman Colin Stewart
53rd Bn. Australian Infantry, A. I. F.
11th April 1918, aged 23.
Plot II. A. 31.
​
Son of  Elizabeth Stewart of Taree, Manning River, New South Wales, and the late William Wallace Stewart. Norman and his elder brother Jack, 1743A, both served in the 53rd Bn., Norman died from wounds 11th April 1918 and brother Jack was killed in action on the 24th April 1918. They were members of a family of nine sons, six of whom had proudly served their country in both the Boer War and WW1 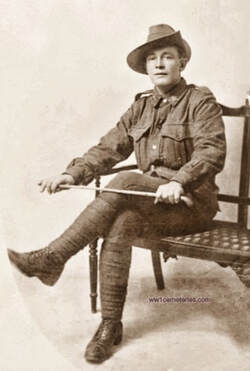 His headstone bears the inscription; "For King, For Country And Freedom, Our Hero."

A 22 year old labourer prior to enlisting on 18 August 1914, he embarked for overseas with the Headquarters staff from Melbourne on 19 October 1914 aboard HMAT Hororata. After serving at Gallipoli where the 7th Battalion had landed on 25 April 1915 as part of the second wave, Driver Walker went on to serve on the Western Front in France and Belgium. He was wounded in the groin by a shell whilst in action at Bussy, France on 11 April 1918 and died of wounds the next day. 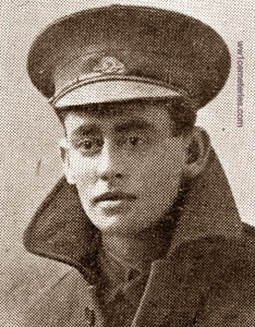 William Walton was fatally wounded near Villers-Bretonneux when he was hit in the face by a piece of shell which blew half of his face away. He was taken to 41st C.C.S. at Namps-au-Val where he died of his wounds. 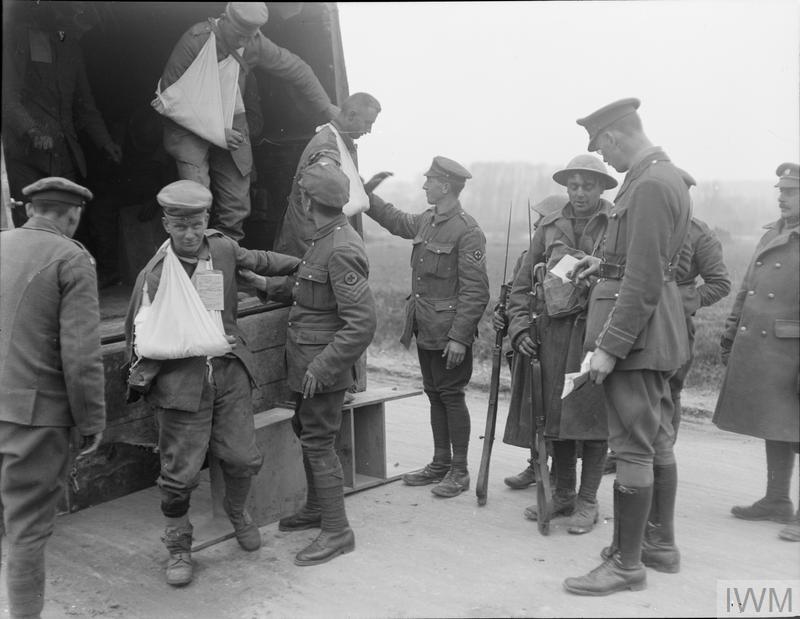 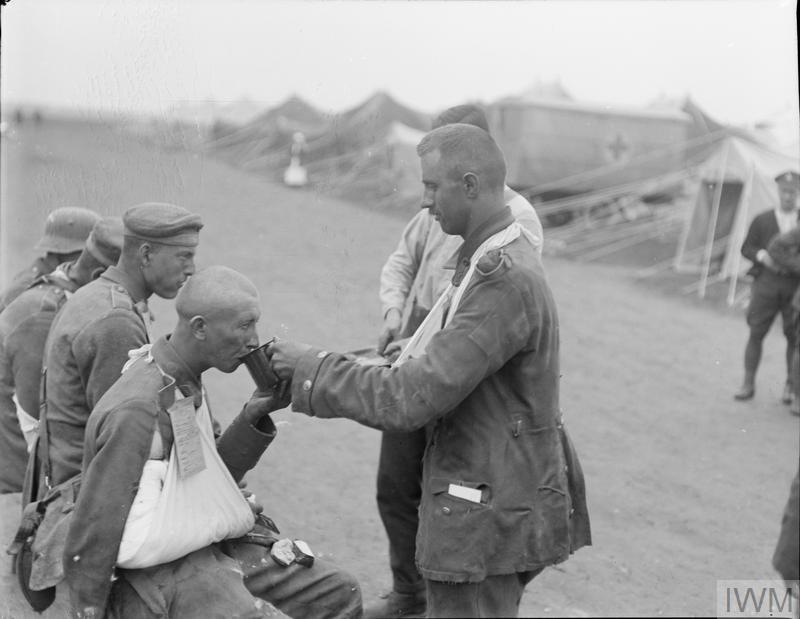 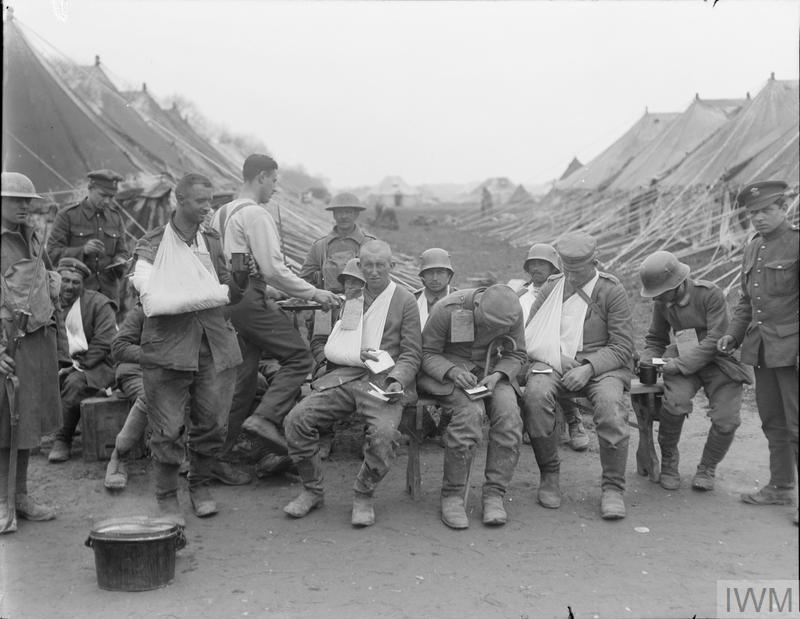 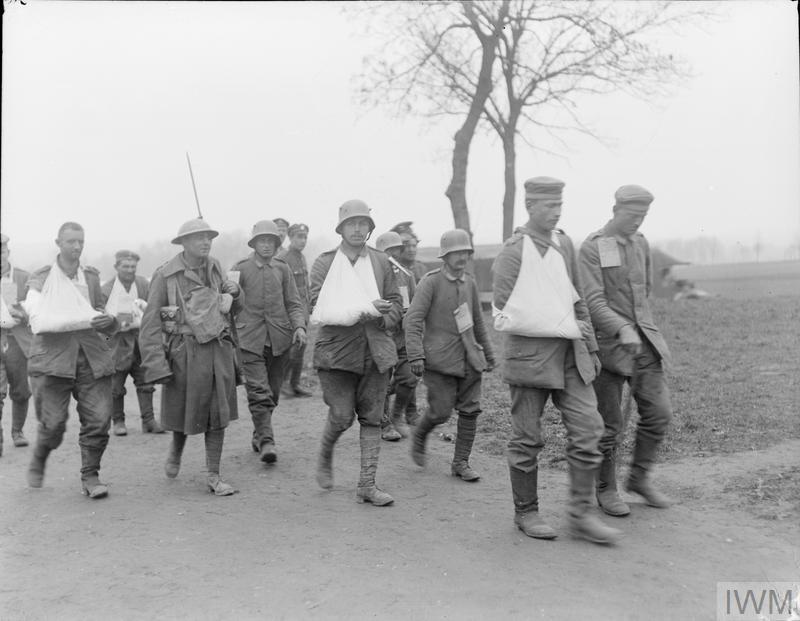 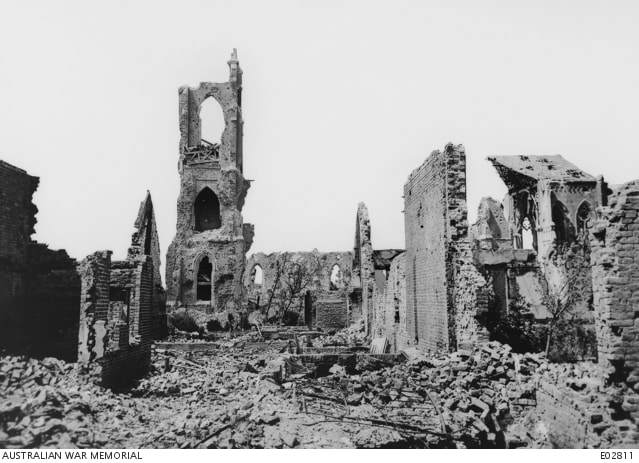 The ruined church of Villers-Bretonneux as it appeared on July 1918. 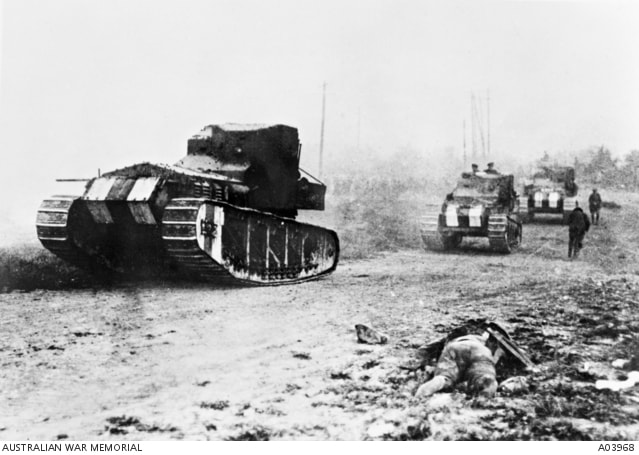 Three British Whippet tanks travelling along a road at Villers-Bretonneux. A body is lying in the foreground.