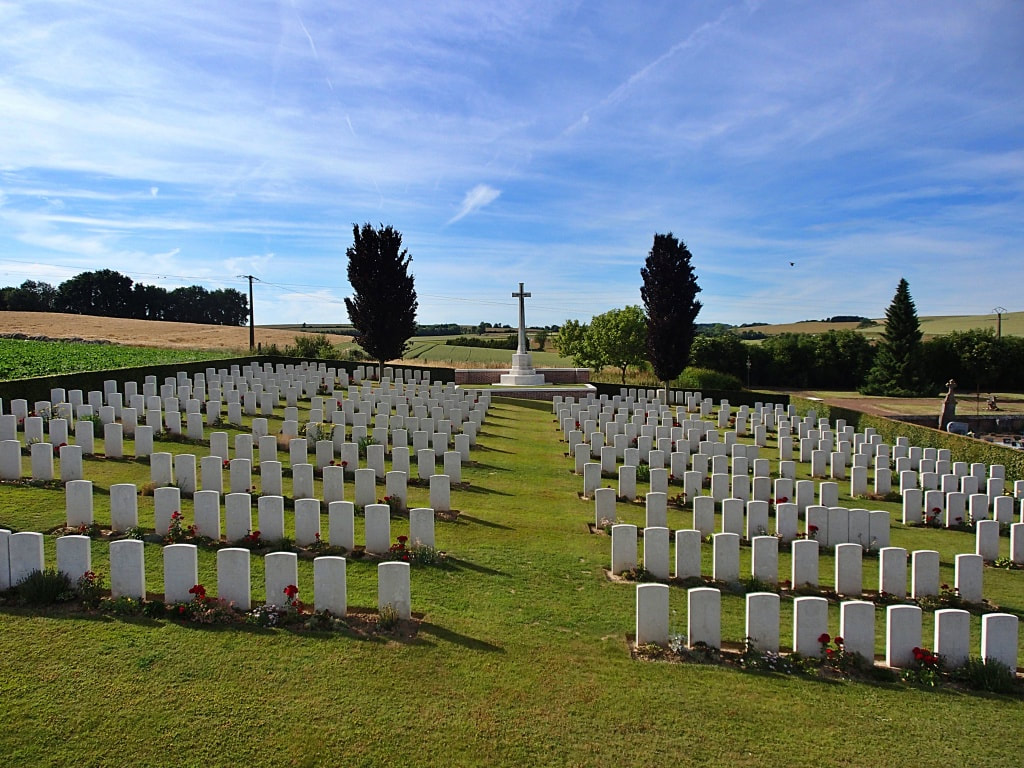 Wheelchair access to this site is possible, but may be by alternative entrance.
​

This sector of the front was taken over by the Commonwealth forces in the early summer of 1915, when Mericourt-Ribemont Station, on the railway line from Amiens to Albert, became a railhead. However, it was not until the German advance at the end of March 1918 that the first burials were made at Ribemont, initially in the communal cemetery itself. The extension was begun in May and used until August 1918, when 68 burials were carried out by units engaged in the defence of Amiens. It was greatly enlarged after the Armistice when graves were brought in from the battlefields of 1918 east of Ribemont and from other cemeteries, including:-

HEILLY BRITISH CEMETERY No.2 (so called in relation to Heilly Station Cemetery), which was in the grounds of Heilly Chateau. It was made by units in April-August 1918, and it contained the graves of 79 soldiers from Australia and 24 from the United Kingdom.

HENENCOURT WOOD CEMETERY, was about 800 metres West of Henencourt, in the Wood. It was used by units and Field Ambulances from June 1916 to August 1918, and it contained the graves of 71 soldiers from the United Kingdom, 34 from Australia, one from Canada, one from South Africa, and one of an unknown unit.

In 1929, the burials in the communal cemetery were also moved into the extension.

The extension now contains 499 burials and commemorations of the First World War. 36 of the burials are unidentified and there are special memorials to two soldiers whose graves in the communal cemetery could not be found, and to 16 buried in other concentrated cemeteries whose graves were destroyed in later battles. 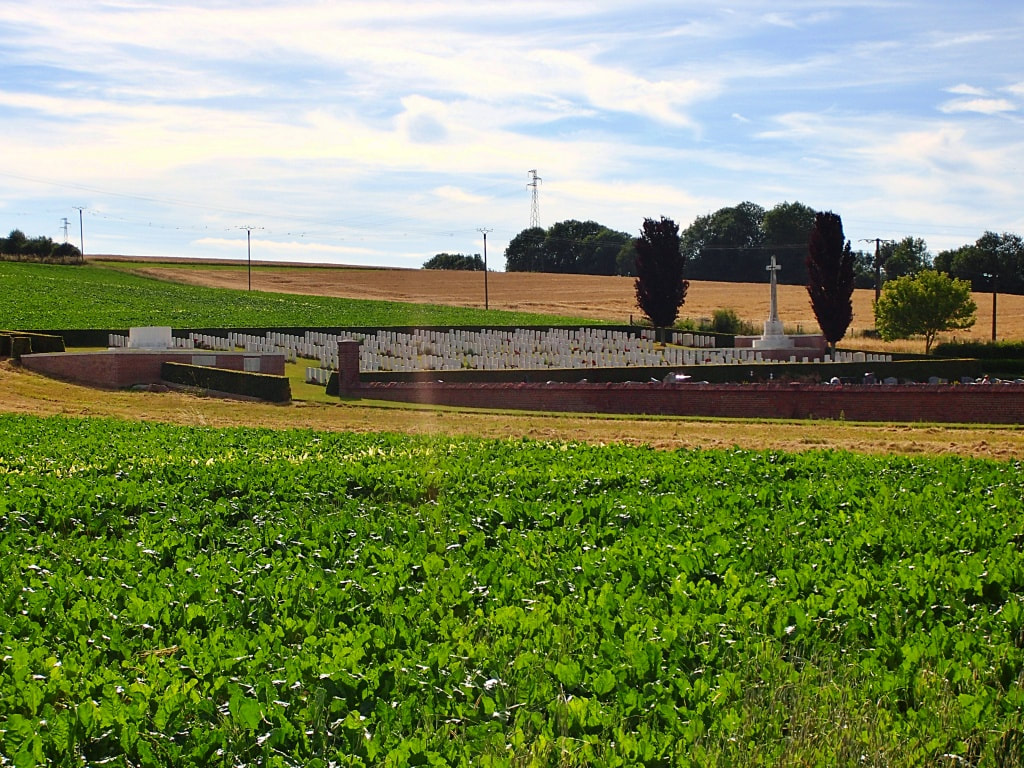 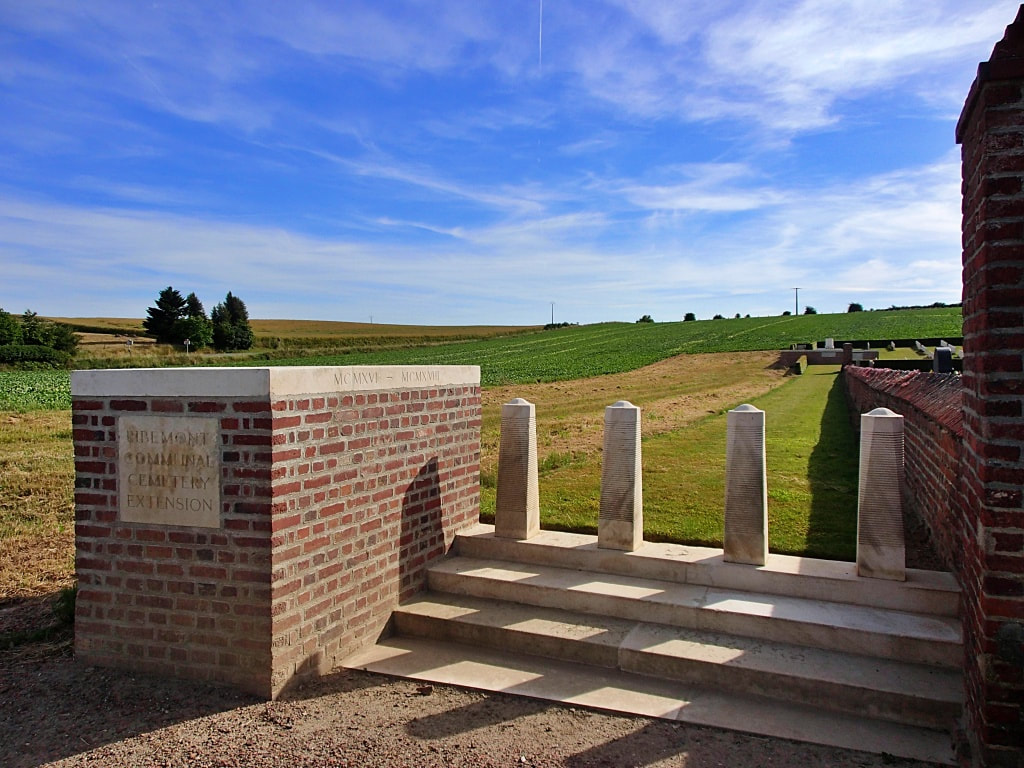 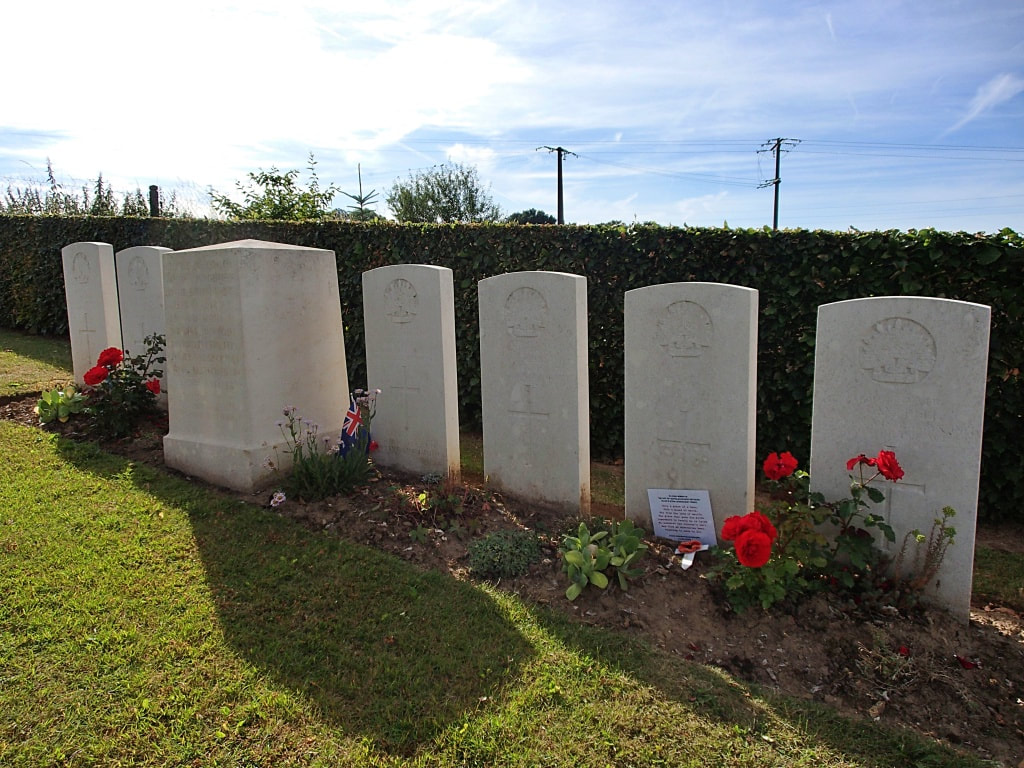 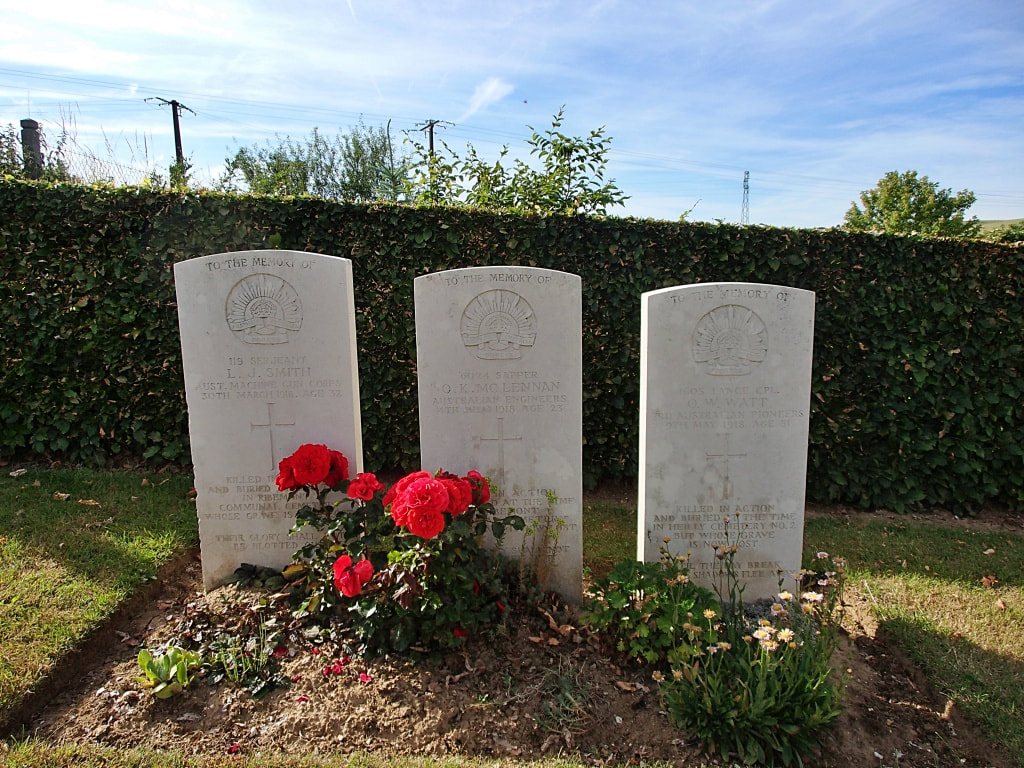 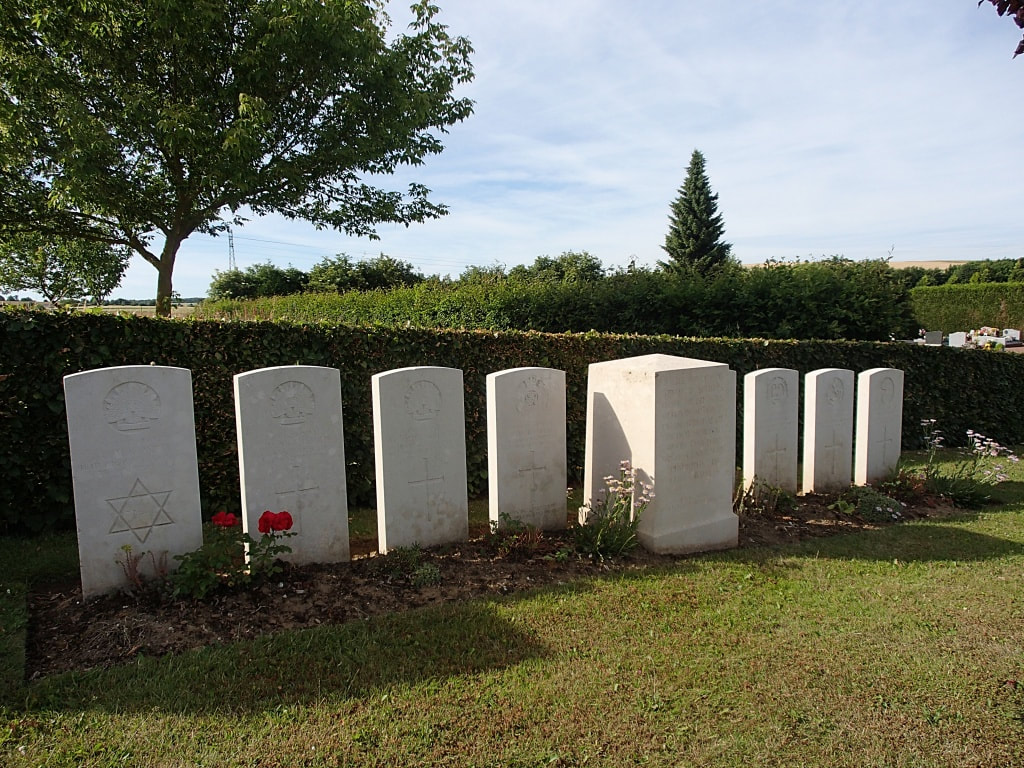 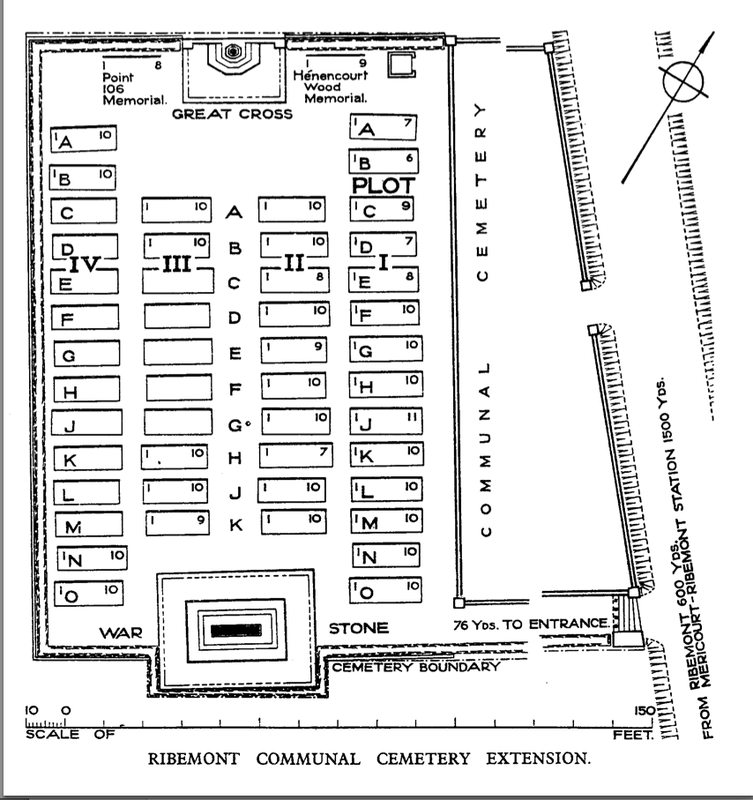 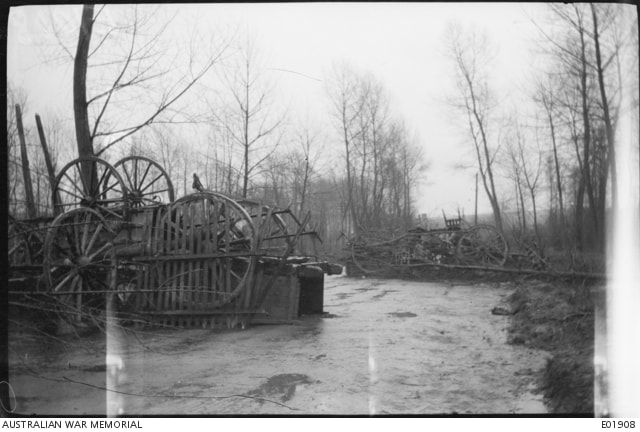 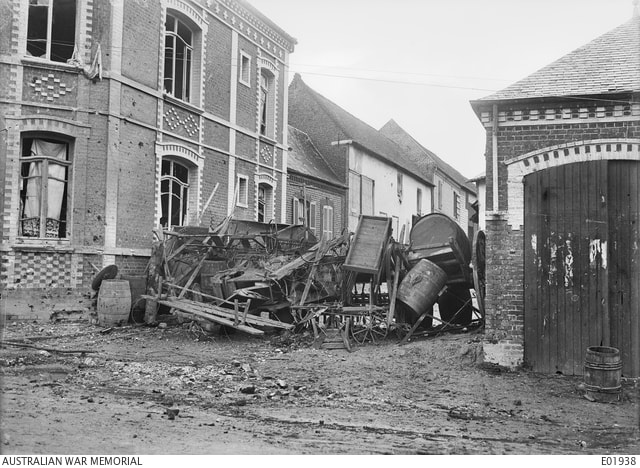 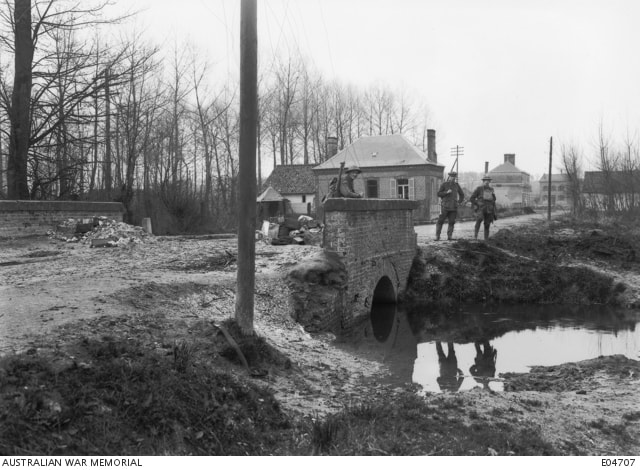 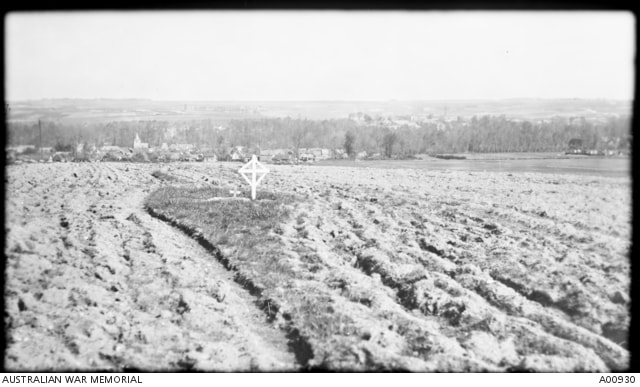 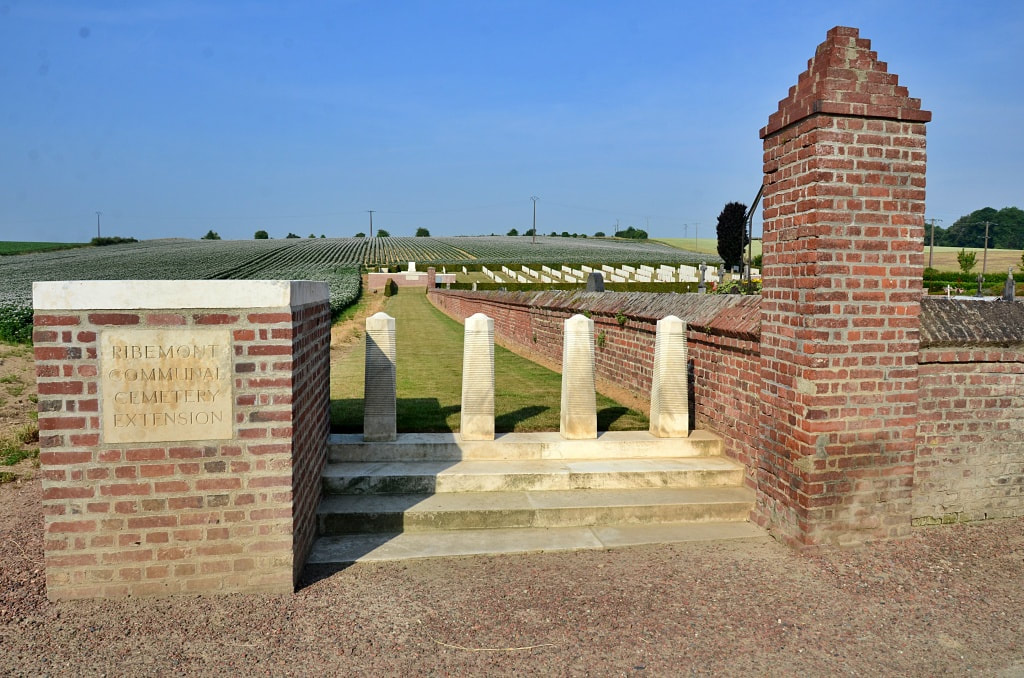 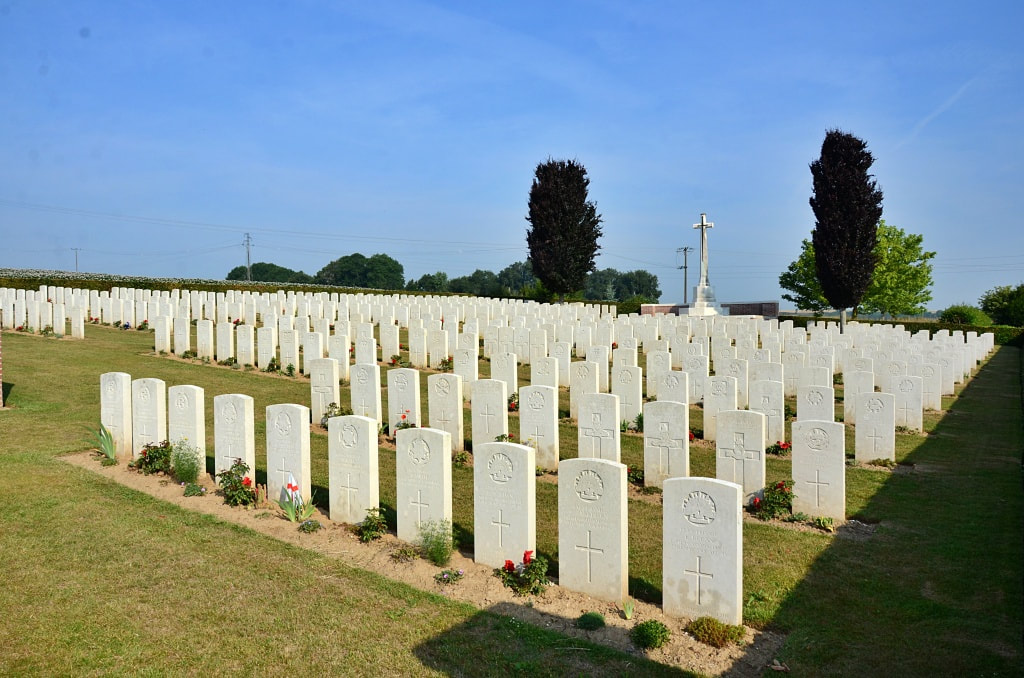 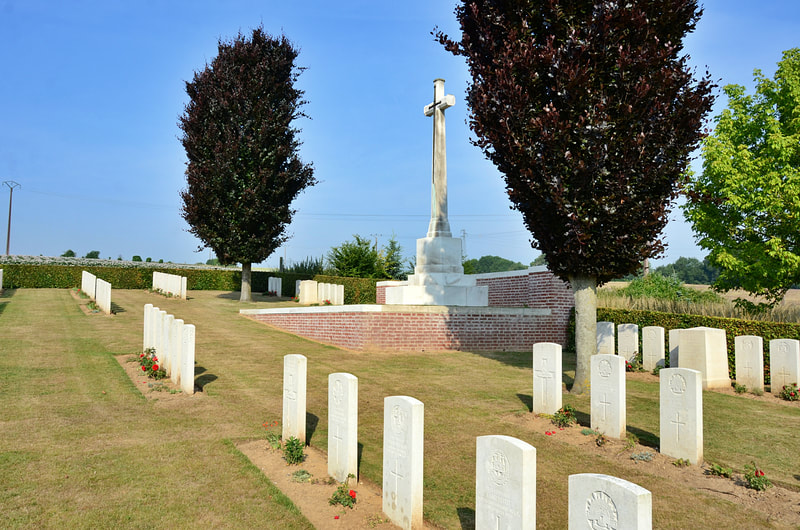 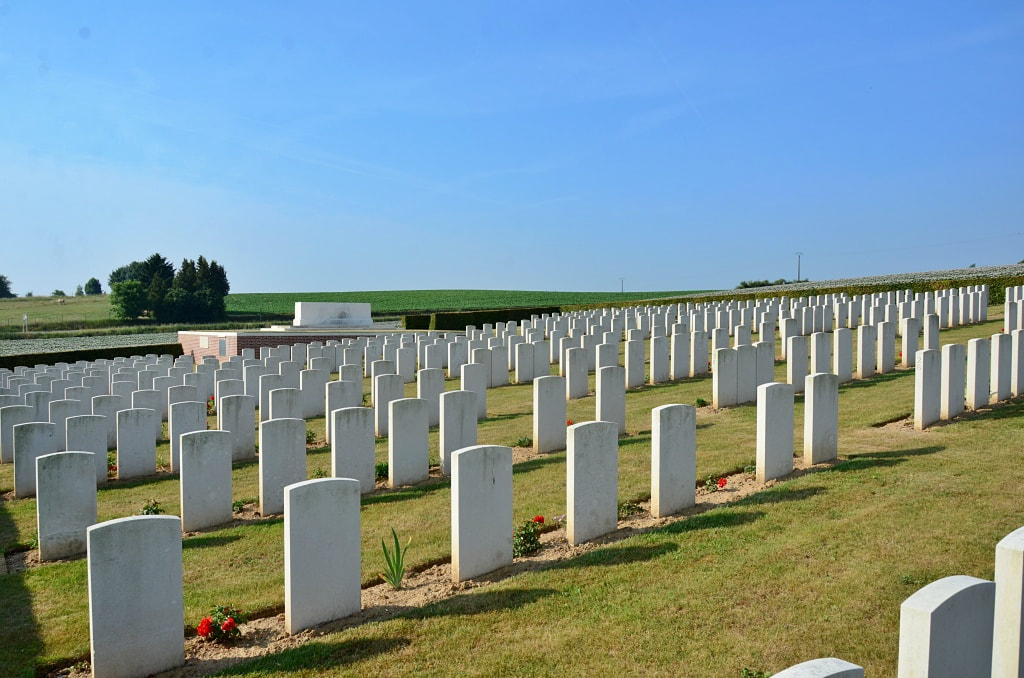 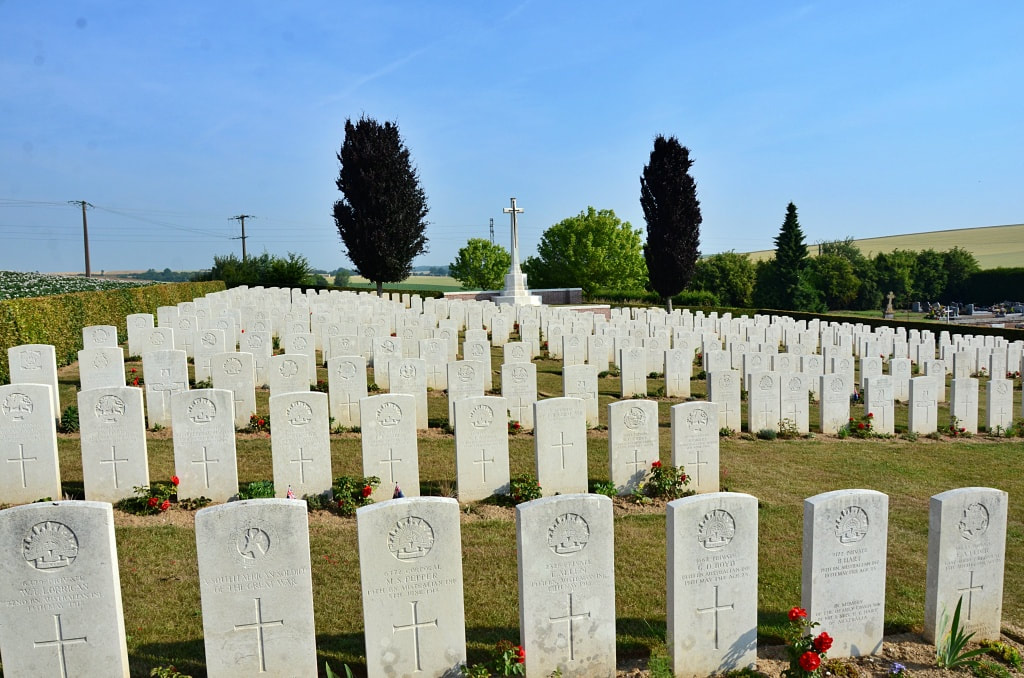 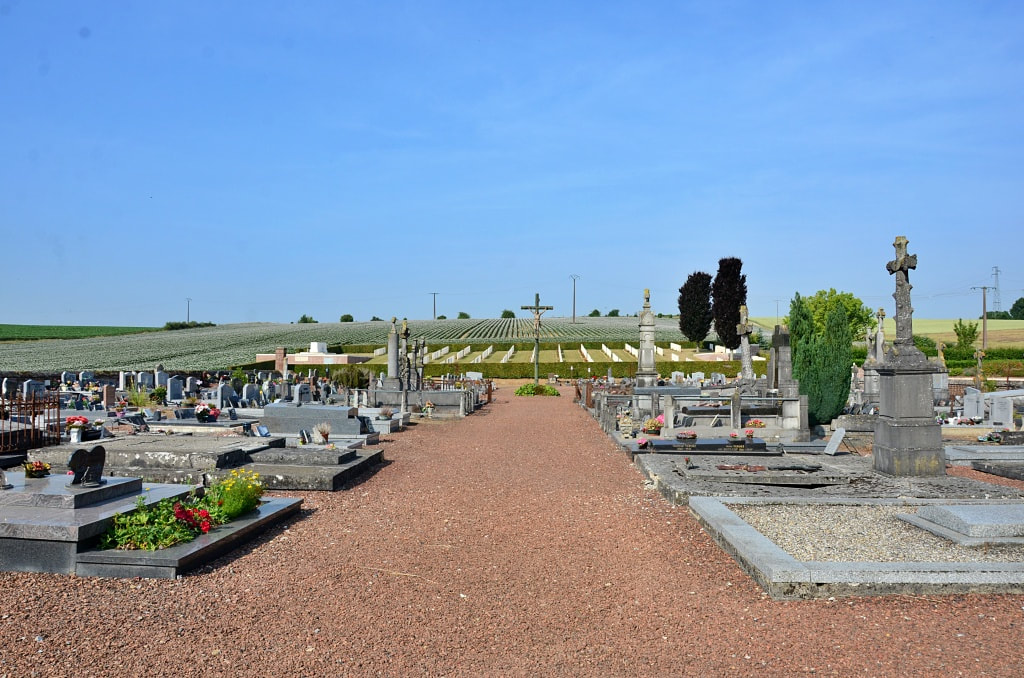 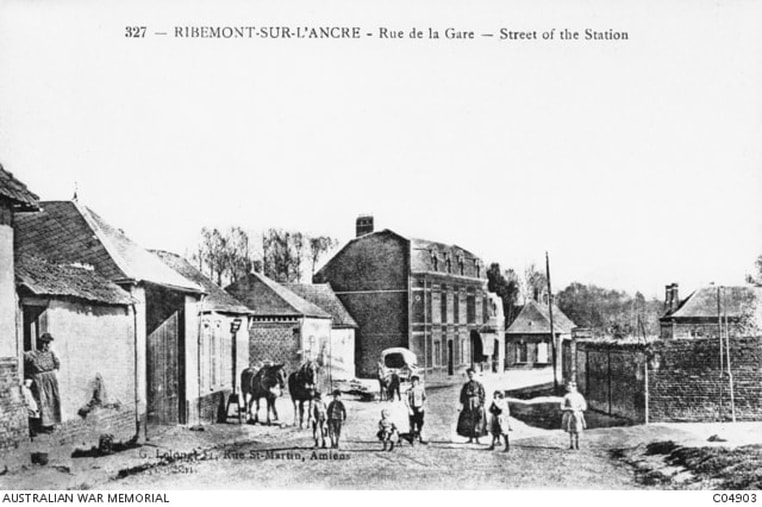 Though a Londoner, formerly of the 7th Hussars, he enlisted in September 1914 with the Canadians — & was tried & sentenced by a full General Court Martial. Butler had killed, with 5 shots, a comrade in his own squadron. It emerged later that he had been behaving strangely ever since suffering a bad fall from his horse.  Mercy was recommended, but Haig confirmed the sentence.  (Putkowski,p.91-92)

He was a pre-war Regular, who had joined up in 1911. In France he served in the same unit as Pte Mullany (see below), who was executed for a similar offence in the same month.

Hamilton told the latter that he had not been smoking, but had picked up a cigarette butt that had fallen from behind his ear & had ‘put it in his mouth while feeding the horses’. The NCO said that the officer would not listen to Hamilton’s explanation. Hamilton, incensed by the apparent injustice, accosted the officer, who brushed aside Hamilton’s polite request to be heard.  At that, Hamilton hit Oates on the face & body with his fists.  (It was said later that Hamilton had some knowledge of boxing).

At trial, Hamilton defended himself fairly ably, demonstrating that the officer had not given the complete story in his evidence; stating that he had felt unjustly accused; that Oates had stumbled on the sloping ground; & that he did not at first realise why he had been arrested.

After conviction, the CO saw no extenuating circumstances, nor did the Divisional & Corps commanders. However the Army commander suggested that  7 years’ penal servitude was appropriate because the officer had refused to let Hamilton speak, but the C-in-C disagreed.

On 16 Sept 1916, the Battery Sergeant Major ordered that 6 teams of horses be harnessed up (for ammunition to be taken up the line), but Mullany protested, shouting: ‘What about some fucking tea ?’.  Placed under open arrest, he sought close arrest (as this would mean he would get his tea). The NCO however told him to get on with the harnessing-up, at which Mullany swore at the Sergeant Major, who ordered him to be put in the guardroom. Mullany then knocked over the NCO, punching him while on the ground; & knocked him down again after another Bombardier’s intervention had enabled the Sergeant Major to get to his feet.

At trial, Mullany said that he had merely approached the NCO with his fist raised and ‘somehow we ran into each other & fell to the ground’.  He sought to call an officer as a character witness, who however was not available (‘at the guns’, unable to get away); but the court went ahead to convict, the president recording that sentence could not have been affected by such evidence.

During the later procedures, a statement was obtained from the officer concerned, which said that Mullany was often insolent in tone, but never openly so; & that he kept his horses & harness fairly well.

The Brigade commander considered Mullany to be ‘an insubordinate man of low class’. All the commanders recommended execution, the Corps commander commenting that ‘discipline in this battery is bad’. (Corns, pp.357-359) 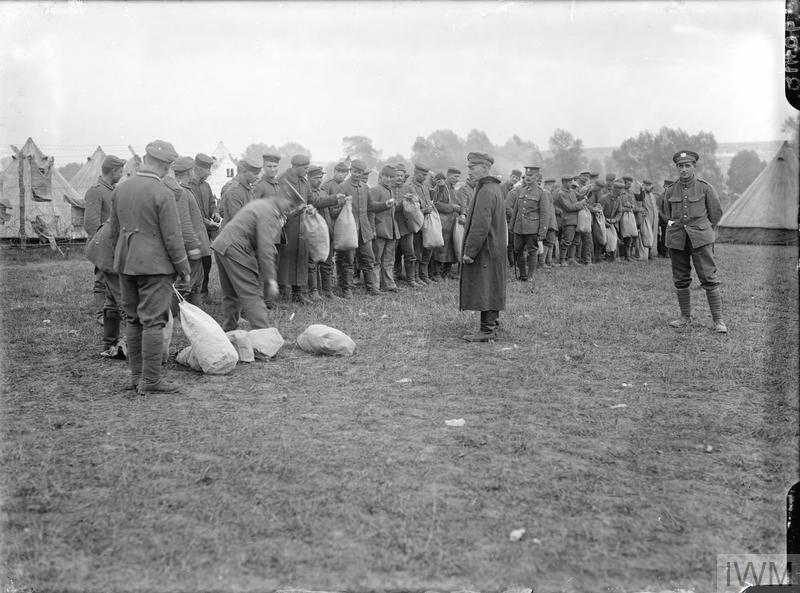 A line of German prisoners being issued with kit at an encampment at Ribemont, October 1916. © IWM (Q 1406) 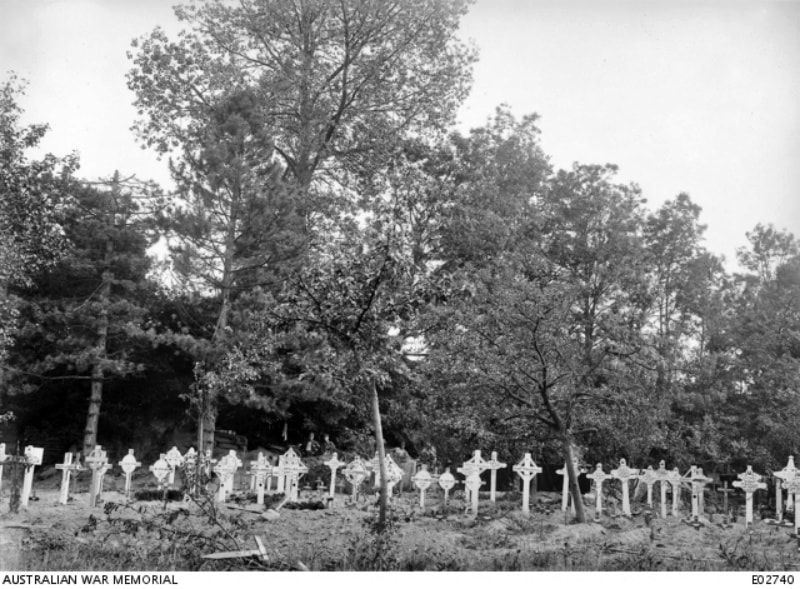 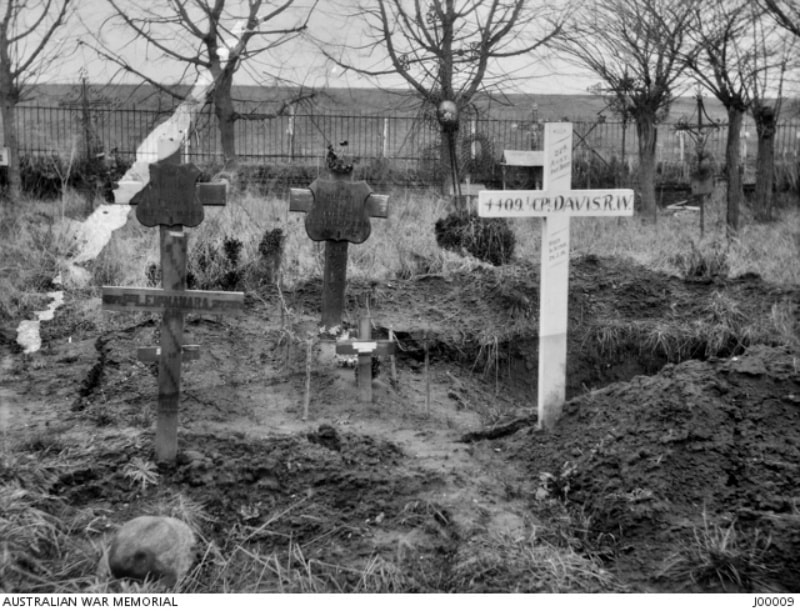 The grave of 4409 Corporal Reginald Walker Davis, 27th Battalion, of Wallaroo, SA, killed in action at Ribemont, near the city of Albert, 28 May 1918, in Ribemont Communal Cemetery. At left is the grave of Private L F McNamara and behind Lieutenant Thompson. All 3 are now buried in the Communal Cemetery Extension. 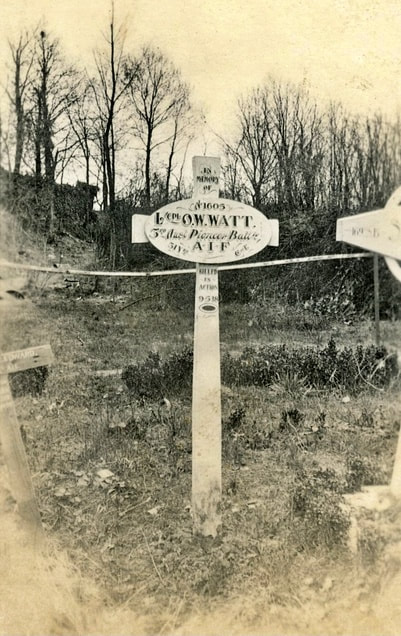 January 1919; 'Grave of my L/Cpl, who was killed by a shell at Heilly & buried there. I was at his funeral." Original cross on the grave of 1605 Lance Corporal (L Cpl) Oscar William Watt, 3rd Pioneer Battalion at No 2 Heilly Cemetery. He was later re-buried at Ribemont Communal Cemetery, Somme. After the war his grave was one of a number which could not be located and he is commemorated on a special memorial in the Ribemont Communial Cemetery Extension. (One of a collection of photographs belonging to Lieutenant (Lt) Robert Trevor Williams and taken by Lt William Wyatt Harvey during a battlefield tour of France and Belgium, January 1919, by officers of the 3rd Pioneer Battalion. The original caption quoted in single inverted commas is by Lt Williams.) 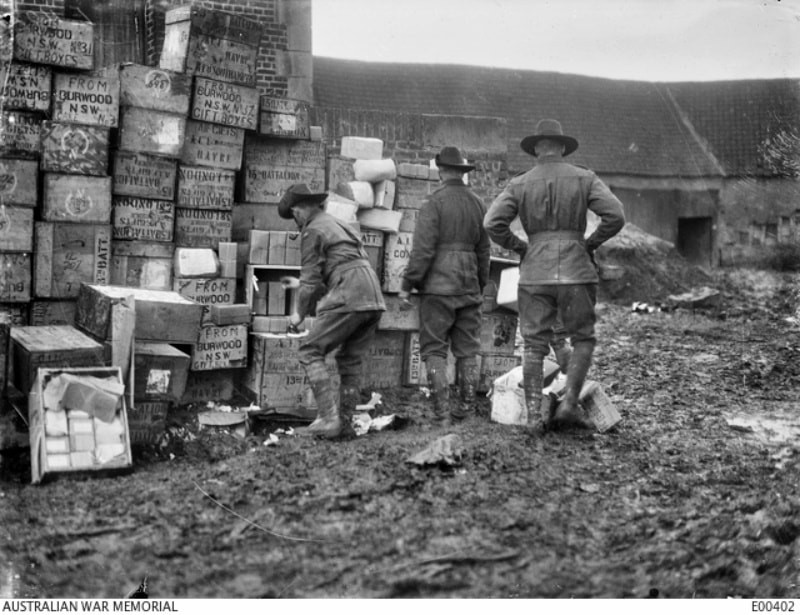 March 1917; Three members of the 13th Battalion at Ribemont, unpacking boxes of comforts from Burwood in New South Wales for distribution to the battalion. 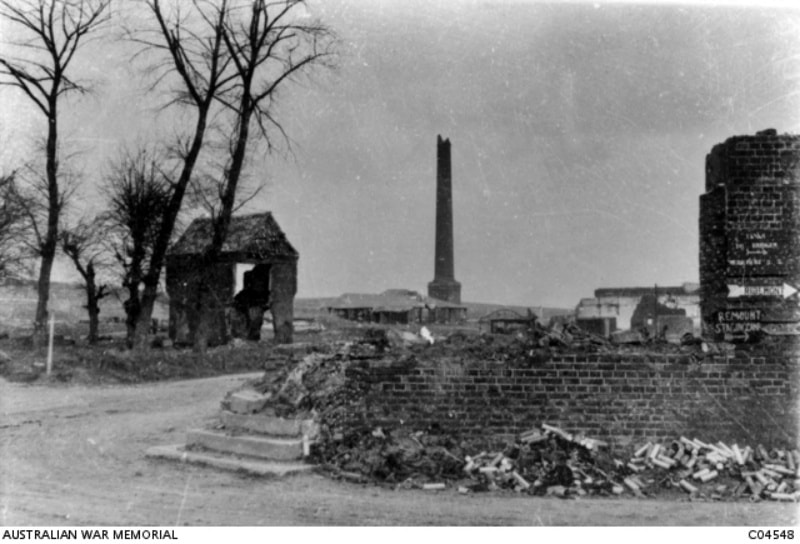 An 11th Field Ambulance car (centre-right) at a loading post in Ribemont. The well-known chimney stack of the Ribemont sugar refinery may be seen in the background. 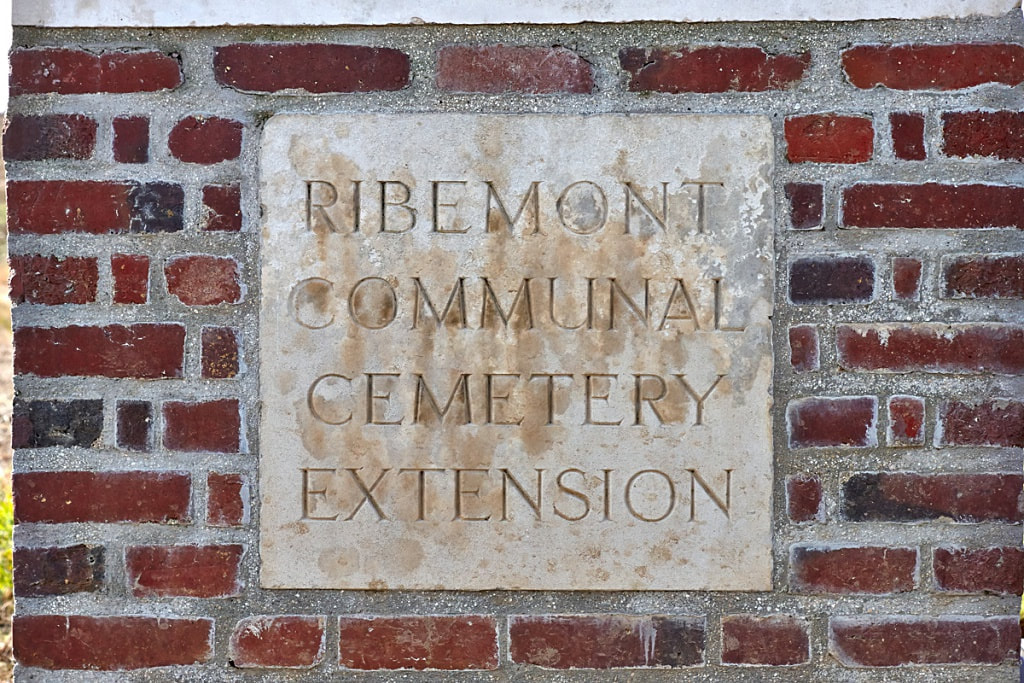 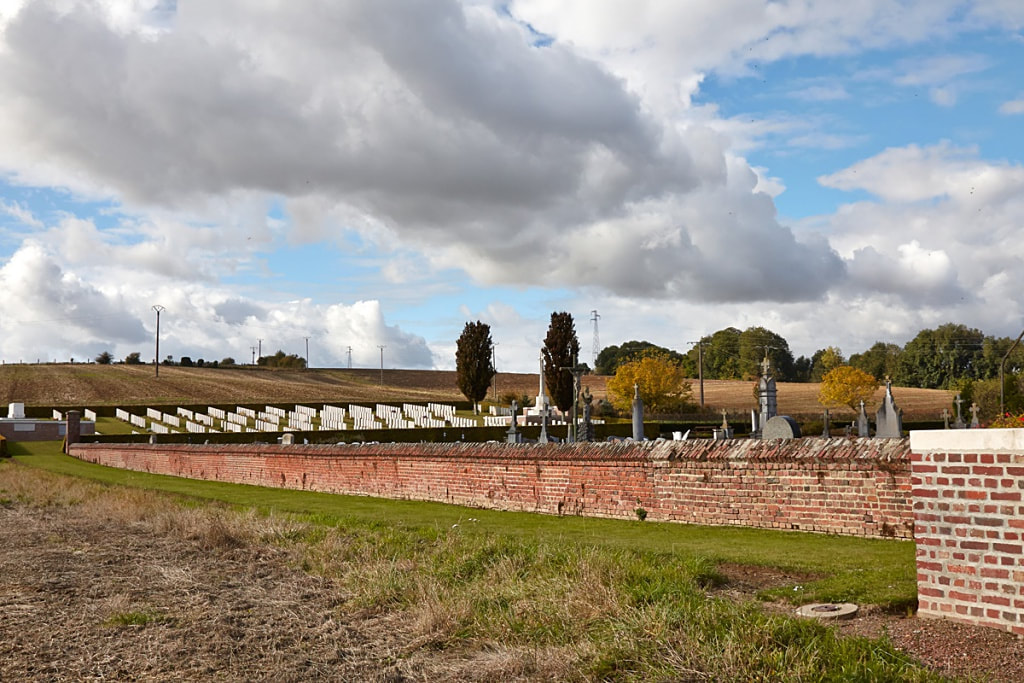 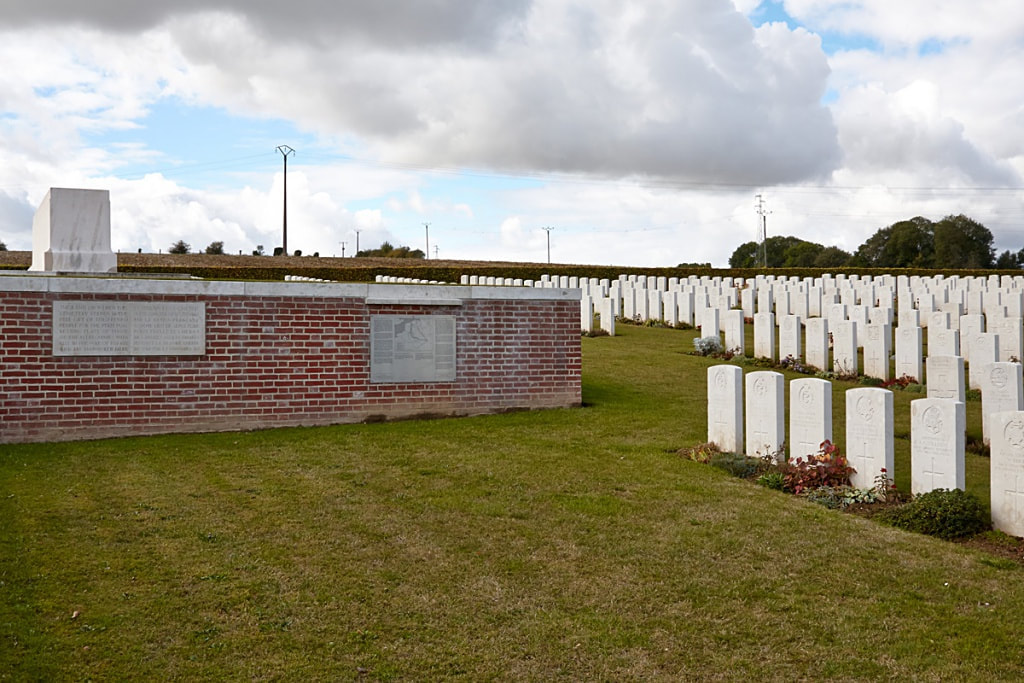 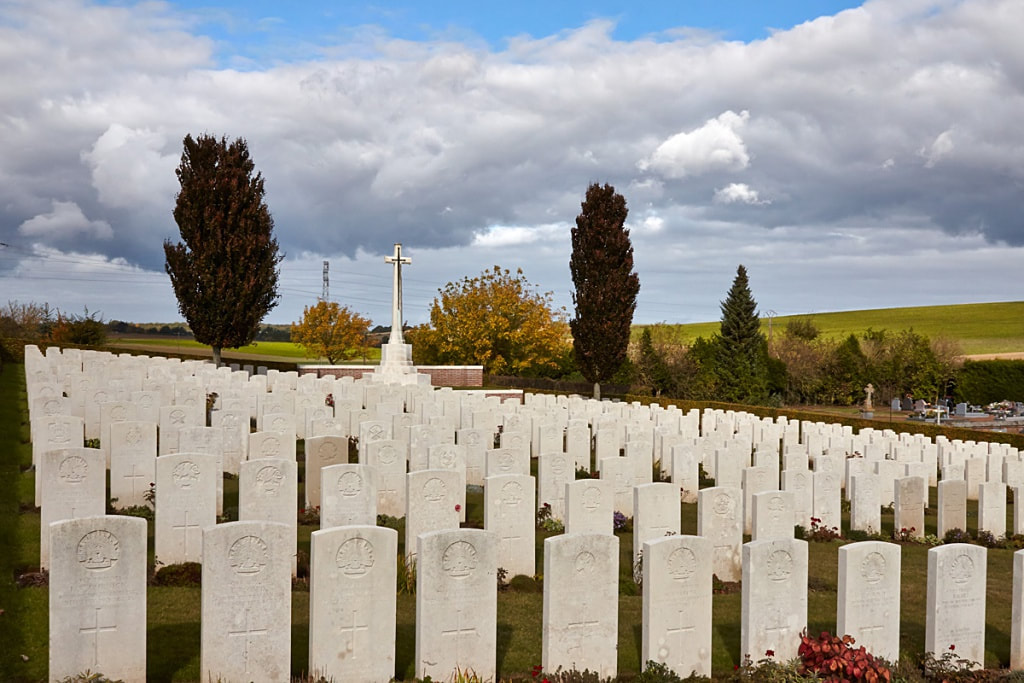 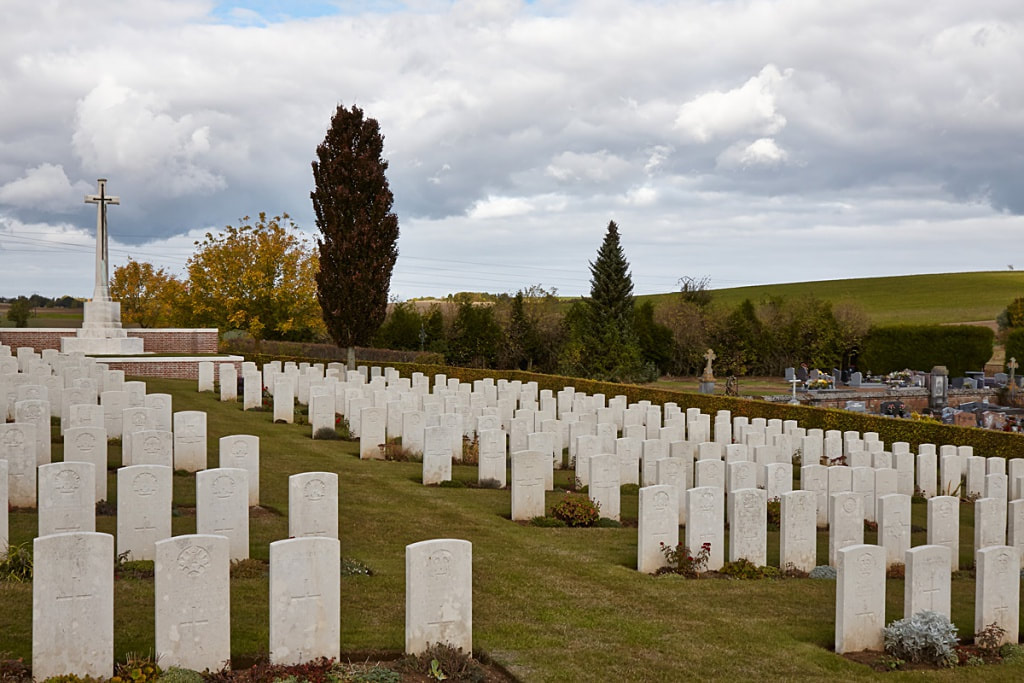 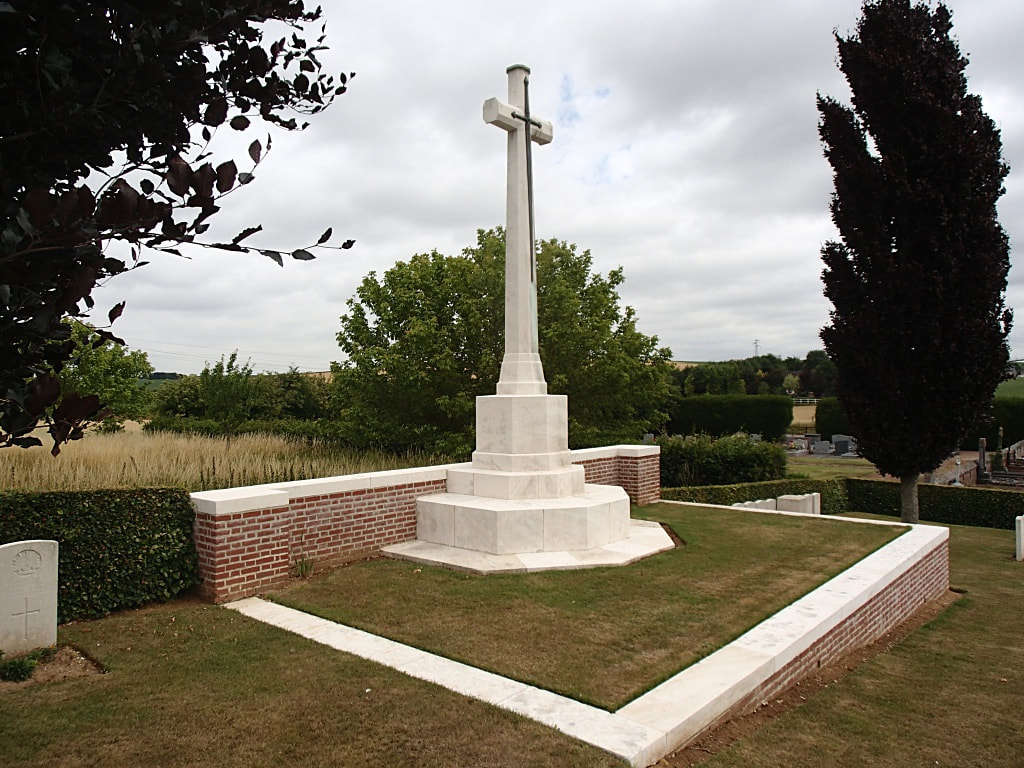 Nearby Cemeteries And Memorials