Salmaise is a village in the Department of the Côte d'Or, some 13 kilometres west of St.-Seine-l'Abbaye Close to the Crucifix is the grave of an Australian soldier. The cemetery is adjacent to the impressive Halles which served as a market place. 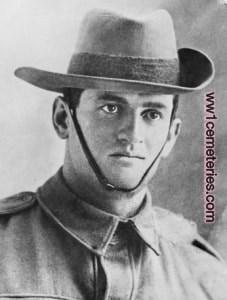 His parents added the following inscription to his headstone: "A soldier and a man, he died honoured by all his country's pride."

A labourer prior to enlisting on 22 December 1914, he embarked for overseas with the 2nd Reinforcements from Brisbane on 13 February 1915 aboard HMAT Seang Bee. He served with the battalion at Gallipoli where he fell sick and was evacuated to Malta and then to Egypt. On recovery, he rejoined the battalion and proceeded to France where he was accidentally killed by a train near Salmaise on 4 April 1916. Pte Meston is buried in the Salmaise Communal Cemetery, France. His elder brother, 1720 Lance Corporal Leslie Gordon Meston, 18th Battalion was killed in action at Morlancourt, France on 19 May 1918 and buried at the Dive Copse British Cemetery.

3891 Lance Corporal, G. H. Richards recalled; "When we left Marseilles on the evening of April 2nd, Meston and Flint missed the train at Laon and came by an artillery train in the guard's van. Meston fell out of the train."

675 Private Proctor, added; "On 4th April 1916, coming from Marseilles to Hazebrouck in a troop train, Meston and others of the battalion got off at a side station and the train went on without them. They picked up a goods train, Meston was leaning against the opening of the truck, the train gave a lurch and he was thrown out and killed."