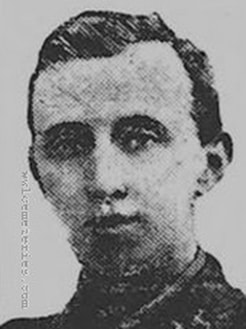 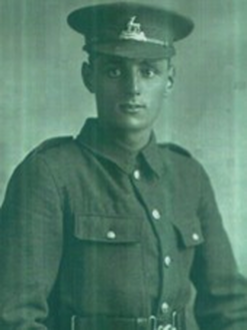 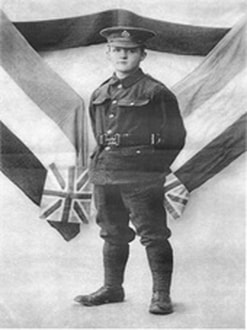 
Remembered by his relative, Lynn Porrino 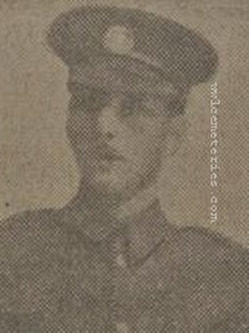 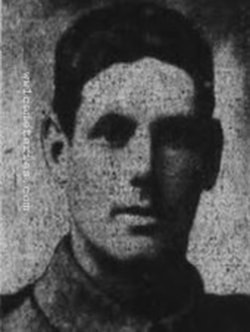 On Thursday Mrs Redmayne wife of Sergeant Miles Redmayne of the 1st Bn. of the East Lancashire Regiment, who resided at Southfield Cottages, Nelson, received word of the death of her husband in action on July 1st. The intimation was sent by a sergeant serving in the same regiment, who stated that Redmayne "died like a hero".

On November 10th an announcement was made that the King had been pleased to approve the award of the Distinguished Conduct Medal to Sergeant Redmayne. Particulars of the deed which brought him such an award were then given as follows:- For conspicuous gallantry on patrol duty on several occasions, notably near Hamel on 23rd September 1915, when seeing two German scouts moving towards a mill, he posted the two men of his own patrol and went forward himself round the building to meet them. One of the enemy shot at him twice at close range with a revolver, but he shot this man through the arm, closed with him and threw him to the ground. He finally brought him in as a prisoner.

Redmayne enlisted in January 1915 and was drafted to the front as a private after four months training. He was promoted to the rank of Sergeant on September 7th. Before going away he was employed at Catlow Quarries. 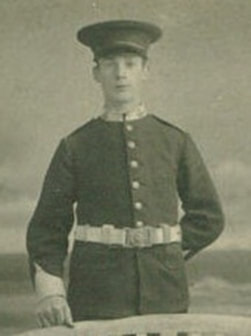 Jesse had eleven sisters but was the only son of Jesse and Clara who
lived at 97 Forest Street, Sutton-in-Ashfield, Nottinghamshire.
He was married to Elsie and they had one son William Ernest.
Before he enlisted Jesse was a miner. 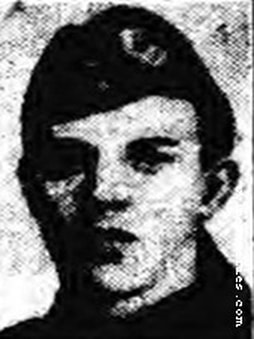 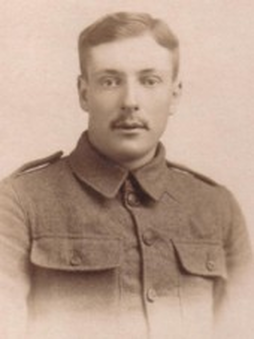 Born George Revely on 05 Mar 1895 in Egglescliffe, Stockton on Tees, County Durham, he was the son of George and Jane Brownless Revely.

Joined the 21st Kings Royal Rifles. He had only been in France a short time when he was reported lost on 15th September 1916 at Flers, France.
​
The family owned a farm in North Yorkshire at the time of his enlistment, where he had worked since a boy. The farm is owned by my in-laws now. George moved there as a six year old and spent 15 years there before his death.

A memorial to him and others lost from their small North Yorkshire village is enshrined in St. Mary’s Church, Myton on Swale, North Yorkshire.
​
Picture courtesy of Stephanie and Thomas Revely, he was their great uncle 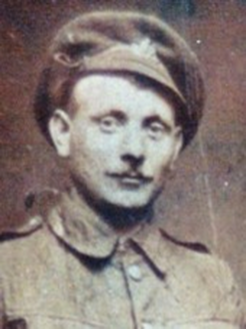 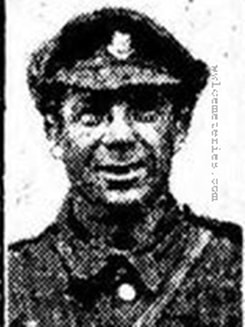 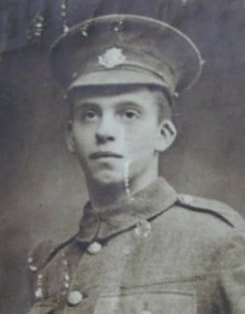 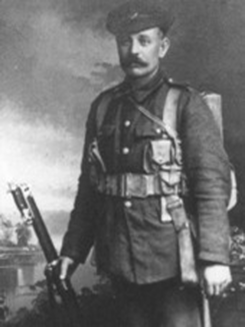 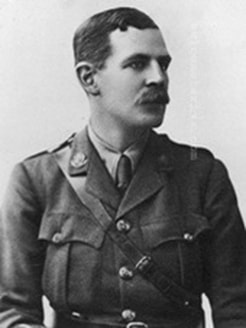 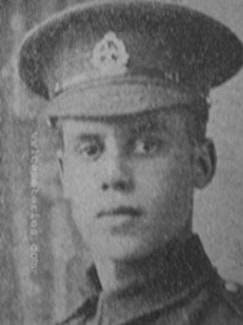 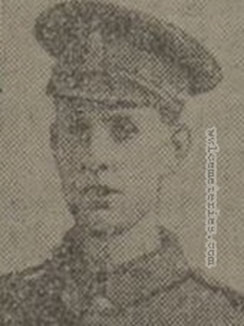 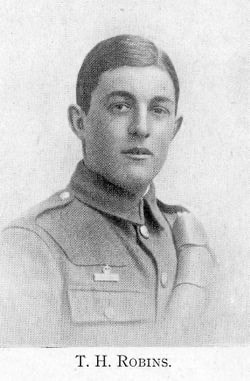 The information below supplied by 'The Ellesmerian Club', the alumni organisation for Ellesmere College where Thomas was a pupil.
​
Thomas Hoblyn Robins was admitted to Ellesmere College on 17th September 1909, shortly after his thirteenth birthday, and he stayed until Christmas 1911. He was born on 14th July 1896 to Thomas Hoblyn and Alice Ann of The Croft, Morville, near Bridgnorth, the eldest of their three children.

He was educated at Bridgnorth Grammar School prior to his admittance to Ellesmere as one of twenty two new boys that term. Three of his direct contemporaries, Digby Cotes, John Kirkpatrick and Tudor Worthington were to die on active service. Digby and Tudor died in the last few weeks before the Armistice was signed. John died whilst serving his country in the Second World War.

There are very few records of Thomas’ time at the college. He was allocated to the ‘Alfred’ dormitory and was placed in Form III under the instruction of Mr. J. G. Sinclair. By the time he left, he was in The Lower Vth with Mr. Poole, who also saw active service during the conflict.

He represented the college in the U. 14, Football team on one occasion and scored his team’s only goal in what was a heavy defeat. Thereafter, he represented his dormitory in various sports.

After leaving the college, Thomas would, almost certainly, have gone to work for his father on the family farm until the outbreak of war when he enlisted, in October, in the Shropshire Yeomanry, Service No. 2288.  He did not maintain any contact with the college or the Old Ellesmerian Club.

After training in the Lowestoft area, he transferred to the 6th Battalion, the Kings Shropshire Light Infantry (Service No. 26576) and it was here that Thomas first encountered trench warfare in the various bloody encounters that formed the Battle of the Somme. It was most likely that, on 6th October 1916 during the attacks on Butte de Warlencourt in the battle for Transloy, that Thomas met his death, two weeks after landing in France, just twenty years old. The battalion war diary records; “Trenches 6/10/16. No unusual activity. 6pm. Relief of battalion by 6th Oxford & Bucks L.I. commenced and battalion moved into Reserve….Large parties again found for digging assembly trenches & carrying to front line. One other rank killed and 19 other ranks wounded. 2 other ranks wounded (self-inflicted wounds)”.

His body was never recovered and his life is commemorated on the Thiepval Memorial and on the War Memorials at St. Gregory’s Church, Morville, Bridgnorth and Ellesmere College. He was awarded the Victory Medal and the British War Medal.

The Ellesmerian recorded: “His officers always spoke of him in the highest terms.”

The Roll of Honour contains two comments by fellow officers.   The first wrote: “And to tell you how much attached I was to your son. He was always bright and cheery and nothing that was wanted was any trouble. I am very sure that he did his best to the end and that everyone who was with him deplores his loss.”

The second said: “They were all splendid and your son was one of the best of them, and however much you feel his loss you cannot but be proud of the character he had.”

The Bridgnorth Grammar School Magazine, December 1916 contained his obituary:
Private T H Robins (Shropshire Yeomanry) died out in France in October. He had fretted at the length of his training in England and was all eagerness to get into the firing line, but though his wish was granted him, he was not destined to have a very long time on the battlefield. He had been out only a very short time when he was struck by a shell and killed instantly.

T H Robins connection with the school dates back 14 years or more and for many years the name of ‘Tommy Robins’ was one of the best known in the School. He was
One of most “sporting” Old Boys, full of life and vigour, full of fight. Looking back over the past, one thinks of him first as a very tiny boy running about between the legs of the big boys. He was the smallest boarder at the school at that time, probably the smallest boarder we ever had, and to see him playing happily round the legs of the captain of the School and Senior Boarder, a strapping six footer, was a sight worth seeing. As he grew up he distinguished himself by being foremost in every rough-and-tumble enterprise that required skill and daring. And yet one was never anxious about him, for he had an abundance of sturdy manhood in him and his character was fundamentally serious and solid.

He had died nobly at his post and there was some comfort in the thought that his end was so mercifully swift. Our heartfelt sympathy goes out to his sorrowing parents and friends. We trust they will find comfort in their great grief”. 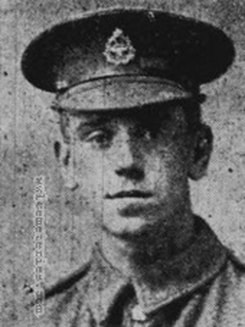 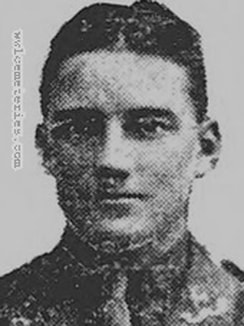 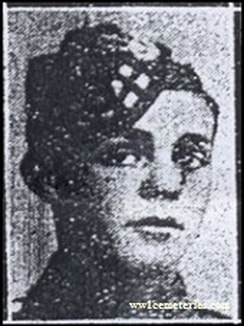 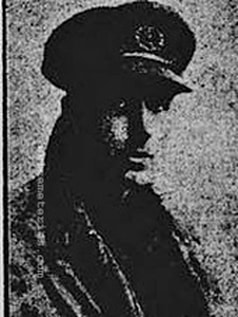 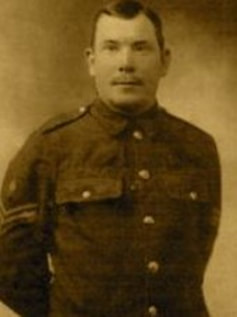 12116 Lance Corporal
James Rymer
15 Platoon, "D" Company, 8th Bn. Yorkshire Regiment. (Green Howards)
Killed during the Battle of the Somme when attacking the village of Contalmaison on 10th July 1916, aged 20.
Pier and Face 3 A and 3 D.

His brother Robert Rymer, M. M.  was also killed during the Great War at the Battle of Estaires in 1918, he is commemorated on the Ploesgteert Memorial.