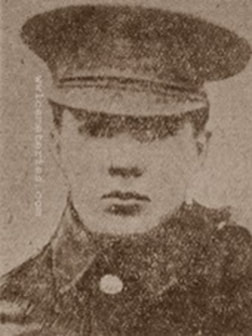 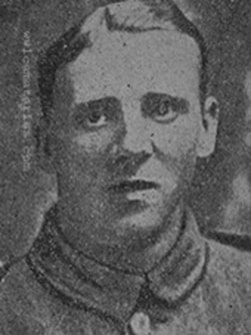 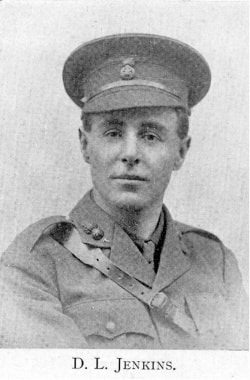 The information below supplied by 'The Ellesmerian Club', the alumni organisation for Ellesmere College where David was a pupil.

David Lewis Jenkins, the son of Captain David and Anne Jenkins of Enkrania House, Llanon, Aberystwyth, was born on 2nd June 1886. He entered the ‘Arthur’ dormitory at Ellesmere College, north Shropshire in May 1900, one of twenty-nine new boys admitted that term, and stayed for two years until he left in July 1902. There were one hundred and ninety pupils in the college.

During those two years he played a very full and active part in college life, on and off the sports field.

He passed his Oxford Local Examinations in Arithmetic, Dictation, English Grammar, History, Shakespearian Essay, Welsh and Mathematics. He also gained his Pitman Shorthand Certificate - and excelled in this to the extent he was awarded the prize for it at Speech Day 1902.

He played cricket for his dormitory, took part in the swimming sports in the summer of 1902 and was a very keen rugby player who represented the college on many occasions. His reputation as a player saw him go on to play for Crickhowell and Brynmawr in the 1903 season. His enthusiasm for sport of all types was demonstrated when he was selected to sit on the Games Committee.

There is very little evidence of his chosen career path immediately he left Ellesmere. It is presumed that he entered the world of banking and worked his way up through the profession as he was the manager of the National Provincial Bank, Abergele when he enlisted in the Liverpool Pals in September 1914.

He had been serving as a Corporal in the 5th (Voluntary) Battalion (Territorial Force), the Royal Welsh Fusiliers prior to the outbreak of war and so was commissioned almost immediately as a 2nd Lieutenant.

On 16th September 1914, he joined the Royal Welsh Fusiliers. He saw action in Gallipoli and was present at the landings at Suvla Bay. He was wounded in this campaign and invalided back to England.

On his recovery he transferred to the Royal Flying Corps and he was based at the No. 2 School of Aeronautics from 7th November 1916. However, for reasons unknown, he was to re-join the 10th Battalion, the Royal Welsh Fusiliers on 7th April 1917.

His promotion to Lieutenant was confirmed in July.

On 26th September 1917 he was at the attack on Zonnedecke Church where he was in charge of the first company in his battalion to reach their objective. Before going into action he had, according to his superior officer, said to his men “Now Boys! ‘Hen Wlad Fy Nhadau ’(Land of my Fathers). He died in the action.

Captain Richards, a fellow Officer, wrote: “I still feel dazed and hardly realise that he has gone. He was absolutely lionhearted. On one occasion at least that I know of he deserved some very high recognition of his work.”

His life is commemorated on War Memorials at Tyne Cot, Belgium; Llansantffraid, near Llanon; Ellesmere College and on the Memorial to the 5th Battalion, the Welsh Regiment, Pontypridd. 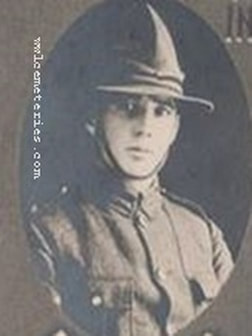 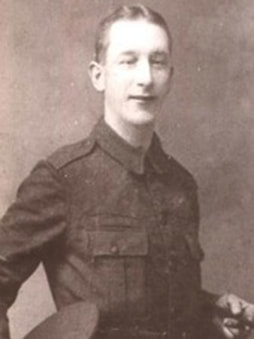 Son of William Jolly and Elizabeth Calderbank of Chorley.

Remembered by his Grandson Ian Jolly. 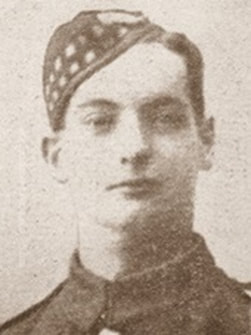