William Lee Brookes Richards was a local lad from Whitchurch. His father, John Richard Richards, who had married Frances Jane from Ellesmere, was retired at the time of William’s birth on 20th September 1897. By trade, he was an ironmonger and tinplate worker. The family lived at “Moss Side”, Brownlow Street, Whitchurch and William was the third of six children, the second boy.

He was educated Whitchurch Grammar School, Bargates, Whitchurch from January 1907 until December 1914 and then admitted to Ellesmere College at the end of April 1915. He stayed until the end of the Autumn Term that same year, a residency of just two terms. Although only resident for such a brief spell he won his 2ndXV rugby Colours and took an active part in the Debating Society. He played cricket for his dormitory, ‘the Alfred’. He also joined the Officer Training Corps and was twice awarded the French Prize.  He was described as a quiet and unobtrusive boy.

William enlisted at Oswestry in January 1916, a month after leaving Ellesmere, and became Private Richards, Service No: 89777. Initially posted to the 38th (Welsh) Division, he later transferred to the 115th Company, the Machine Gun Corps. He missed the worst of the Somme but, in 1917 he was to take part in the Battles of Pilckem and Langemark, episodes in the bigger Battle of Passchendaele. At Langemark, on Sunday 25thAugust 1917, when there was no rain and the temperature was 67°F with 50% cloud, William was killed as the German artillery bombarded dugouts that had been captured from them. He was one of 632 Allied servicemen to lose their lives that day.

William’s body was never recovered and his life is commemorated at the Tyne Cot Memorial.   He was just nineteen years old. His Platoon Commander, 2nd Lt. Louis F Brown (himself killed in action on 14th May 1918) wrote to his parents: “I am very grieved to have to send you news of your son’s death. William Lee Brookes, 115th Machine Gun Company. It occurred early in the morning of August 25th, he was in a captured German dugout with the enemy shelling and a shell hit the dugout and blew it in. He was killed probably without knowing any pain. I was with him at the time; he had just done a spell of duty manfully under most trying circumstances, and was on his way to get a day’s rest. He had proved his value as a soldier, and as a comrade, even in the short time he had been with us. Today a parcel arrived for him, and I have passed on the contents to his friends and I am returning one or two trifles we were able to find on him”.

William was awarded the British War and Victory Medals. His elder brother, John, died on active service the following year. 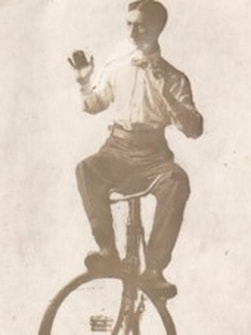 Arthur Richardson died at Langemarck and after his death my grandmother moved to Australia with their two daughters one of whom was my mother. My grandmother subsequently married an Australian. I do not know a lot about my grandfather but do know that he managed or worked in a bicycle shop in Cambridge and was obviously something of a showman! Had he not died, I would never have lived as my grandmother would probably not have moved to Australia so I very much honour his sacrifice and have this photo on proud display in my home.
I have very little knowledge of my grandfather's forebears or those of my grandmother, Winifred Elsie Ivy Richardson (nee Perry). I would be very interested to know more if there is anyone out there who can enlighten me. 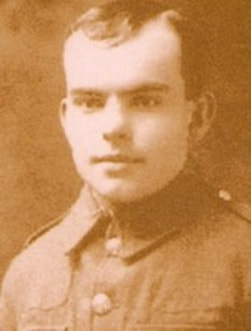 He was killed in action during 3rd Ypres (Passchendaele) and his body was never found. Arthur's name now appears on the Tyne Cot Memorial Panels 72 – 75
A year after Arthur's death a notice appeared in the Memorandum section of the Wellington and Shrewsbury Journal, It was from Arthur's family and read;
Rogers - In ever-loving memory of our dear son and brother, Private Arthur Rogers, 6 Lightmoor. Killed in action Oct. 9th 1917. “Days of sadness still come o’er us, hidden tears do freely flow, memory keeps our dear one near to us, although he died twelve months ago” Silently mourned by his loving Parents and Sisters.
​
Picture courtesy of Dave Shaw 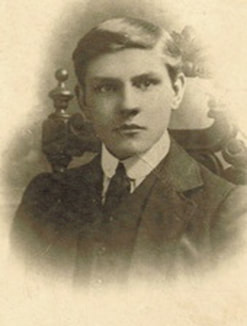 He was the son of Alfred and Ellen Rogers (nee Speakman). He was transferred from The Royal Scots Greys after the 1916 Battle of the Somme and was killed in action on 16th August 1917 at Passchendale. He has no known grave and is commemorated on panels 65 and 66 of the Tyne Cot Memorial along with other members of the S.W.B.
​
Picture courtesy of great niece, Yvonne Burns
​