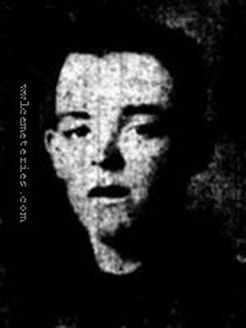 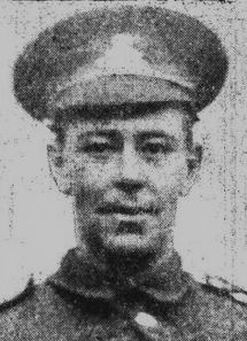 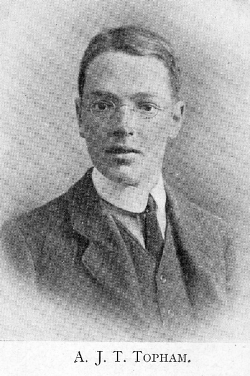 The information below supplied by 'The Ellesmerian Club', the alumni organisation for Ellesmere College where Alfred was a pupil.​
Alfred James Tudor Topham arrived at Ellesmere College on 7th May 1909 and boarded until December 1916. He was born at Bradford-on-Avon, Wiltshire, on 9th March 1897, the elder son of James, a bank clerk, and his wife, Mary Jane. His younger brother, Francis Basil, also came to Ellesmere.

Alfred led a very full life at college. He played a variety of female roles in the various Shakespearian Society dramas, culminating in that of Calpurnia in “Julius Caesar”. (1912) He had success in the various Oxford Local Examinations, passing at his first attempt, Arithmetic, Religious Knowledge, English, Geography, Latin, French, Mathematics and Book-Keeping.

By April 1915, he was dormitory Prefect of the ‘Alfred’ where he had started his career. The following month he was a School Prefect and, in September 1915, he was appointed Prefect of Chapel. He was promoted Sergeant in the Officer Training Corps; secretary for the Games Committee and Reporting Secretary of the Debating Society.

Although he played for the college 1st XV, he was only awarded his 2nd XV Colours. His abilities as a player were described by The Ellesmerian (April 1916) as: “Heavy and slow but fairly good in the tight. Does not use his weight to the best advantage”.

During his last term at Ellesmere, Alfred formally applied for a commission in the Special Reserve of Officers. He completed the necessary documentation and attended interview in Shrewsbury. The Headmaster, the Reverend T. H. Hedworth, wrote the necessary character reference and Alfred detailed his experience with the college O.T.C. He expressed a preference to join the King’s Shropshire Light Infantry.

The War Office duly instructed Alfred to report to the Bristol University Officer Cadet Battalion on 25th February 1916 to undergo the necessary training which he successfully completed. On 3rd July he was gazetted temporary 2nd Lieutenant to the 3rd (Reserve) Battalion, the K.S.L.I. and formally confirmed in the rank the following October.

Alfred was in France by that November attached the 7th Battalion as the 3rd Battalion was a home based training unit. His service records indicate he was admitted that month to No. 1 Red Cross Hospital at Le Touquet suffering from ‘flu. The 7th Battalion had seen action on the Somme in July 1916 and went on to fight at Bazentin Ridge, Serre and Ancre later in the year. It was in action at Arras and in the three severe battles of the Scarpe in April - May 1917. Back in the Ypres sector in 1917, the battalion took part in the fighting at Polygon Wood in September (the 3rd Battle of Ypres).

Appointed Acting Captain on 20th July 1917, Alfred led his men out on Wednesday, 26th September 1917, to gain a foothold on Zonnebeke, a village which had been heavily fortified by the Germans. Peter Barton in his book, ‘Passchendale’, describes the day as “quintessentially autumnal, still and misty, with a warm sun waiting to break through”. Alfred, however, did not survive. He was one of 15,500 casualties of the day: “But these were deemed satisfactory, for the key battlefront was moving forward at the required tempo.”

His Colonel wrote: “He died most gallantly at the head of his company, which he was commanding during the attack. Moreover up to the time he was hit he had been doing splendid work as indeed he always did. His death is a great loss to the battalion and to me personally. Always exceedingly popular he was an absolutely first rate Officer in every way, and I had intended to give him a permanent command of a company on the next vacancy.”

Alfred’s body was never recovered and his sacrifice is commemorated on the panels of the Tyne Cot Memorial, close to where he died. He was awarded the Victory and the British War Medals and these were sent to his father in 1922 who was, by then, a manager for the Capital & Counties Bank in Gosport.

The 7th Battalion, the K.S.L.I. suffered more casualties than any other battalion in the regiment with 1,048 killed in action or died of their wounds during the war and earned more battle honours than any other K.S.L.I. battalion.
​