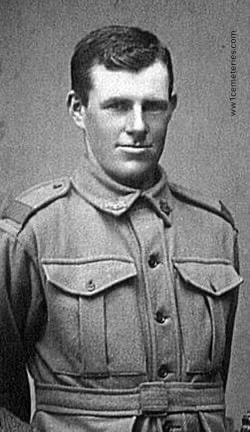 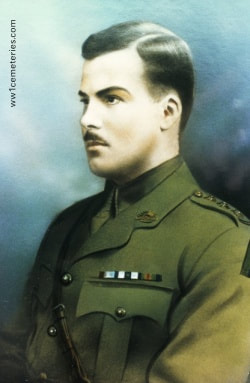 Lovett enlisted on 23 August 1914 and was assigned regimental number 448, C Squadron, 1st Light Horse Regiment, which embarked from Sydney aboard HMAT Star of Victoria on 20 October 1914.

On 6 September 1916, Lovett was commissioned as a lieutenant and stationed in the Cario area where he was assigned to the newly formed 53rd Battalion which soon moved to the Western Front in France. This battalion was one of the units which took part in the Battle of Fromelles and Lovett was wounded in this action on 22 September 1916.

He was promoted to Captain on 25 May 1917 and soon after transferred to the 54th Battalion.

In April 1918, the battalion became involved in fighting in the Villers-Bretonneux area. Lovett was also appointed as Adjutant of the unit. Early on 9 April 1918, the Germans launched a heavy bombardment in which the Headquarters of the 54th Battalion was hit with the result that the Commanding Officer and Intelligence Officer were mortally wounded and the Lovett was killed on 9 April 1918.

During his service in France, it is evident that Lovett performed with great distinction , being awarded the Military Cross on 14 December 1916, "For conspicuous gallantry and devotion to duty in action. Though wounded while leading his platoon in the attack, he continued fighting all night...". He was awarded a Bar to his MC on 30 March 1917. Lovett was also awarded the Belgian Croix de Guerre on 19 January 1918 by the French Authorities. He is buried in the Aubigney British Cemetery (Somme), France.

​It was not uncommon for studios to make mistakes when "enhancing" portraits such as this and here the artist has painted the MC and Bar in the centre of the ribbons rather than its proper position at far left (Lovett's right) of the three. The artist has also failed to include the ribbon for the British War Medal which would have accompanied Lovett's medals when sent to his family c 1920. 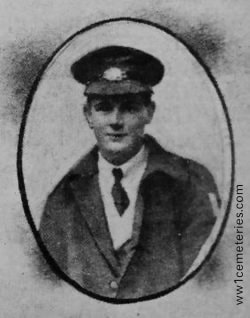 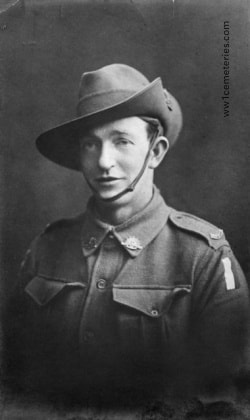 Studio portrait of 4854 Private (Pte) Rupert Clyde McKeon, 56th Battalion, of Marrickville, NSW. Pte McKeon, a labourer prior to enlisting on 27 October 1915, embarked on 8 March 1916 with the 15th Reinforcements of the 4th Battalion from Sydney on HMAT Star of England. On 20 April 1916 he was taken on strength of the 56th Battalion. He was killed in action in France on 8 April 1918.
​ 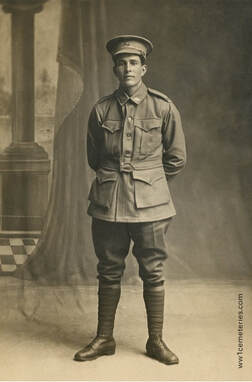 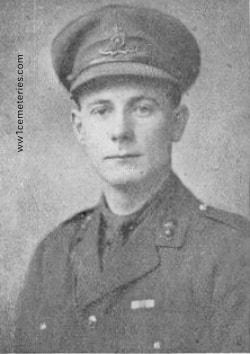 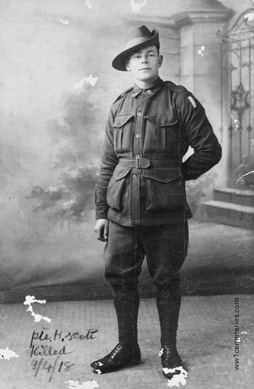 His headstone bears the inscription "A Noble Life A Noble Death"

Studio portrait of 4123 Private (Pte) Harold Bendik Pittersen, 32nd Battalion. A labourer from Midland Junction, Western Australia, he originally enlisted as a Stoker in the Royal Australian Navy on 19 December 1914 but left the navy on 12 May 1916 to join the AIF four days later as 4123 Pte Harry Scott.

He embarked with 10th Reinforcements from Fremantle on 28 October 1916 aboard HMAT Port Melbourne for Devonport, England. Following training in England he proceeded to France and joined his battalion on the Western Front near Grevillers in early April 1917.

The source of the note on the photograph “H Scott Killed 9/4/18” is unknown and is not supported by official documentation. He was aged 23 years. His older brother, 822 Regimental Sergeant Major Norman Pittersen (also known as Norman Stribley), 11th Battalion, also died of wounds received in action near Bapaume, France, on 7 April 1917. He is buried in Bancourt British Cemetery. 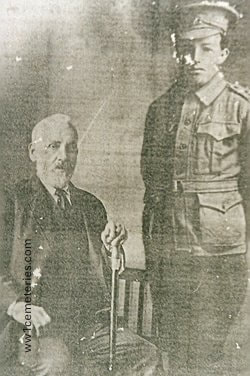 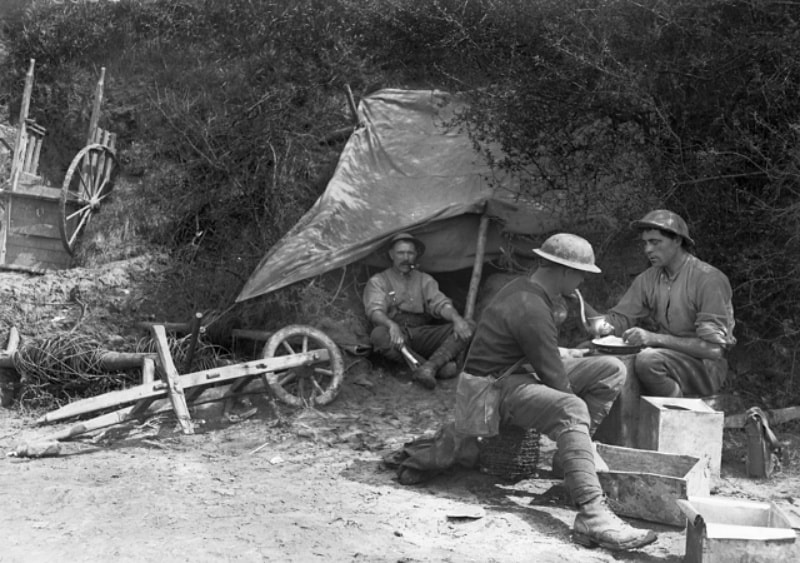 Outdoor group portrait of three members of the 35th Battalion Headquarters near Marett Wood, France.
The soldier preparing a meal on the left and buried in this cemetery is 2402 Private George Dilworth Stubbs, 35th Bn. Australian Infantry, A.I.F. who was killed in action near Villers-Bretonneux on 27th May 1918, aged 35. Row D. 13. Son of George and Isabella Stubbs, of Napier, New Zealand. His headstone bears the inscription "He Feared God And Honoured The King.

The other two soldiers identified are on the left near the tent is 7272 Private (Pte) Edward Kirby from Undercliffe, Sydney, NSW. and preparing the meal with George is 12290 Pte George Arthur Smaills MM from Kempsey, 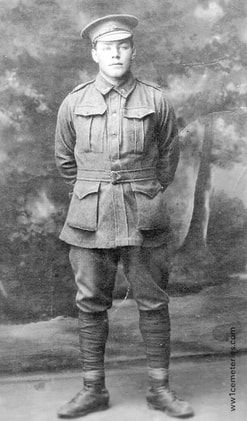 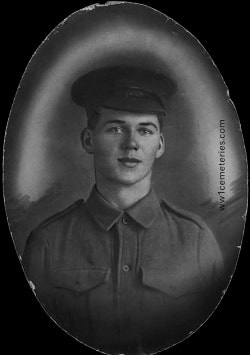 ​Studio portrait of 596 (later 596A) Private (Pte) James Woodlands, 36th Battalion, of Beechwood, NSW. A labourer prior to enlistment, Pte Woodlands embarked with B Company from Sydney aboard HMAT Beltana on 13 May 1916. Later transferring to the 54th Battalion, Pte Woodlands was killed in action in France on 12 April 1918, aged 20. 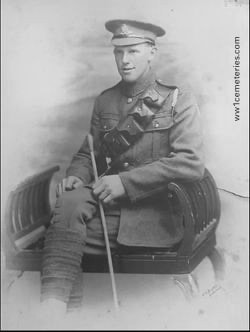 Husband of Mrs. A. Woolfenden, of 499, Edenfield Rd., Norden, Rochdale. 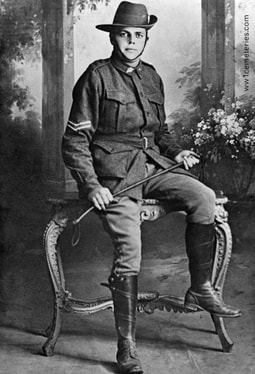 ​Son of William and Louisa Young, of May Terrace, Ottoway, Rosewater, South Australia.

Studio portrait of 8269 Corporal Charles Edward Young, 2nd Field Bakery, from Port Adelaide, South Australia. A 22 year old baker prior to enlisting on 14 June 1915, he was promoted to Corporal on 1 September 1915 and embarked for overseas with the 19th Australian Army Service Corps Field Bakery and Butchery from Sydney on 30 November 1915 aboard HMAT Suffolk. While serving in France with the 2nd Field Bakery, he was promoted to Sergeant on 5 March 1916 and then on 22 September 1917 reverted to the rank of Private at his own request and transferred to the 5th Pioneer Battalion. He was killed in action near Corbie, France on 20 May 1918 and is buried in the Aubingy Military Cemetery, France.