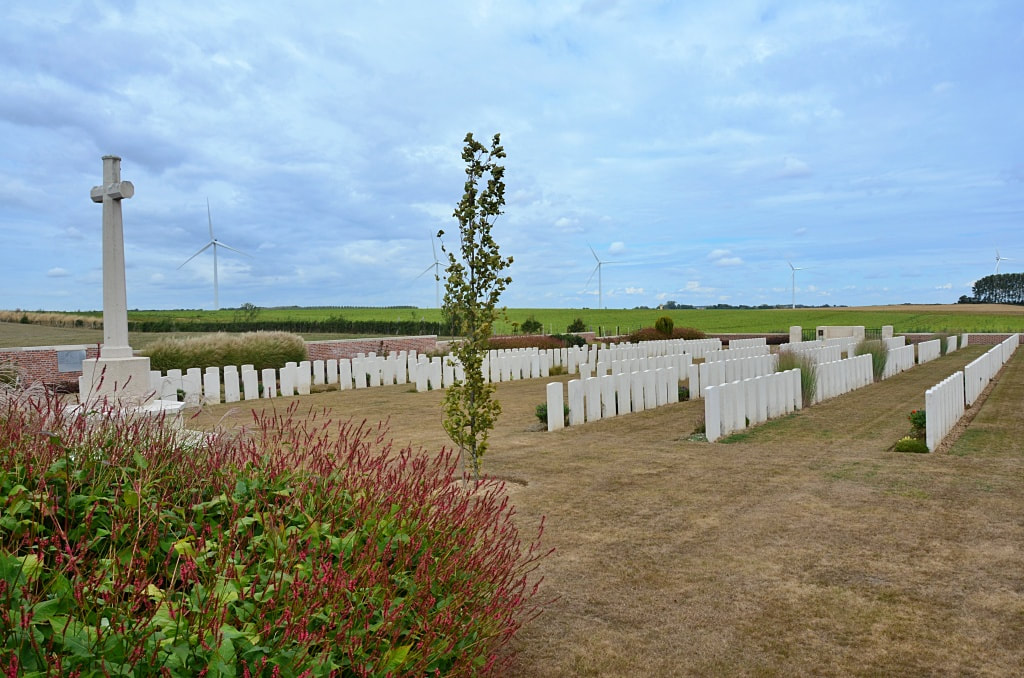 Busigny is a village about 10 kilometres south-west of Le Cateau and 24 kilometres north-east of St. Quentin. The Communal Cemetery and Extension are a short distance west of the village on the south side of the road to Bertry.

Busigny was captured by the 30th American Division and British cavalry on 9 October 1918, in the Battle of Cambrai, and in the course of the next two months the 48th, 37th and 12th Casualty Clearing Stations came successively to the village. The majority of the burials were made from these three hospitals.

The cemetery extension was begun in October 1918, and used until February 1919. After the Armistice it was enlarged when graves were brought into Plots II-VII of graves from a wide area between Cambrai and Guise.

The following cemeteries were concentrated into it:-

ANDIGNY-LES-FERMES BRITISH CEMETERY, VAUX-ANDIGNY, on the North side of the hamlet of Andigny-les-Fermes. This place was taken by the 46th (North Midland) Division and the 1st Loyal North Lancashire Regiment on the 17th October, 1918, and the cemetery contained the graves of 16 soldiers of the latter unit.

BUSIGNY CHURCHYARD, from which the grave of one soldier from the United Kingdom was removed in 1927 to VIII. B 56.

BUSIGNY COMMUNAL CEMETERY, which contained the graves of 13 soldiers from the United Kingdom and eight from Australia, all artillerymen, who fell in October, 1918.

ESNES CHURCHYARD, which contained the graves of one soldier from the United Kingdom and three from New Zealand who fell in October, 1918.

MAGNY LA FOSSE CHURCHYARD, which contained the graves of 19 soldiers from the United Kingdom who fell in October and November, 1918.

MARETZ BRITISH CEMETERY, at the South-Western end of the village of Maretz, made by the 1st/8th Worcesters on the 11th October, 1918, contained the graves of 16 soldiers from the United Kingdom.

MOLAIN CHURCHYARD, which contained the graves of three soldiers from the United Kingdom who fell in October and November, 1918.

MONTRECOURT CHURCHYARD, which contained the graves of two artillerymen from the United Kingdom who fell in October, 1918.

RIQUERVAL BRITISH CEMETERY, BOHAIN-EN-VERMANDOIS, in Riquerval Wood, close to the Bohain-Regnicourt road. This cemetery contained the graves of 35 soldiers from the United Kingdom (almost all of the 46th Division) who fell on the 17th October, 1918.

ROCQ CHURCHYARD, which contained the grave of one Notts & Derby Regiment soldier who fell in October, 1918.

The extension was designed by Charles Holden and John Reginald Truelove 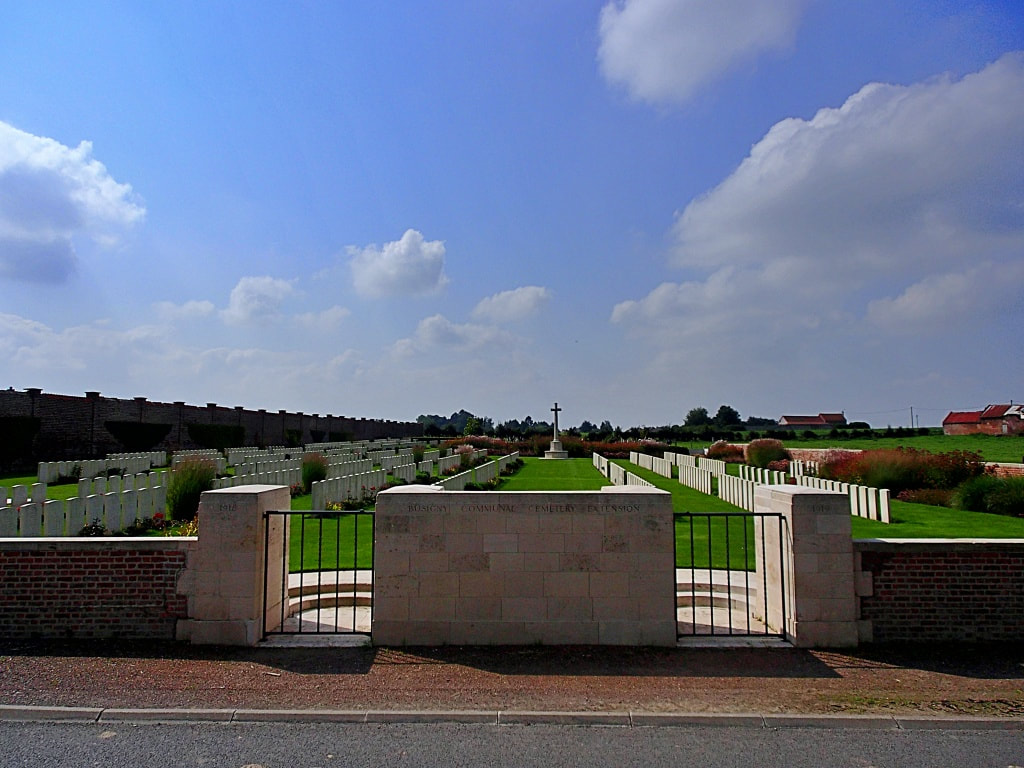 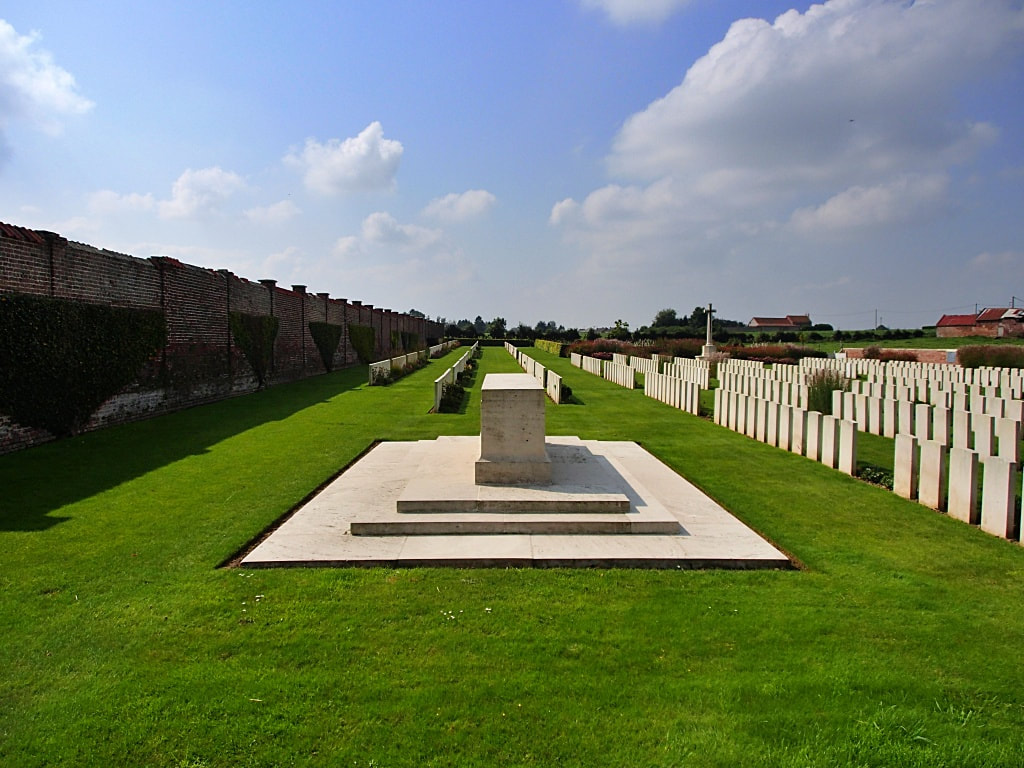 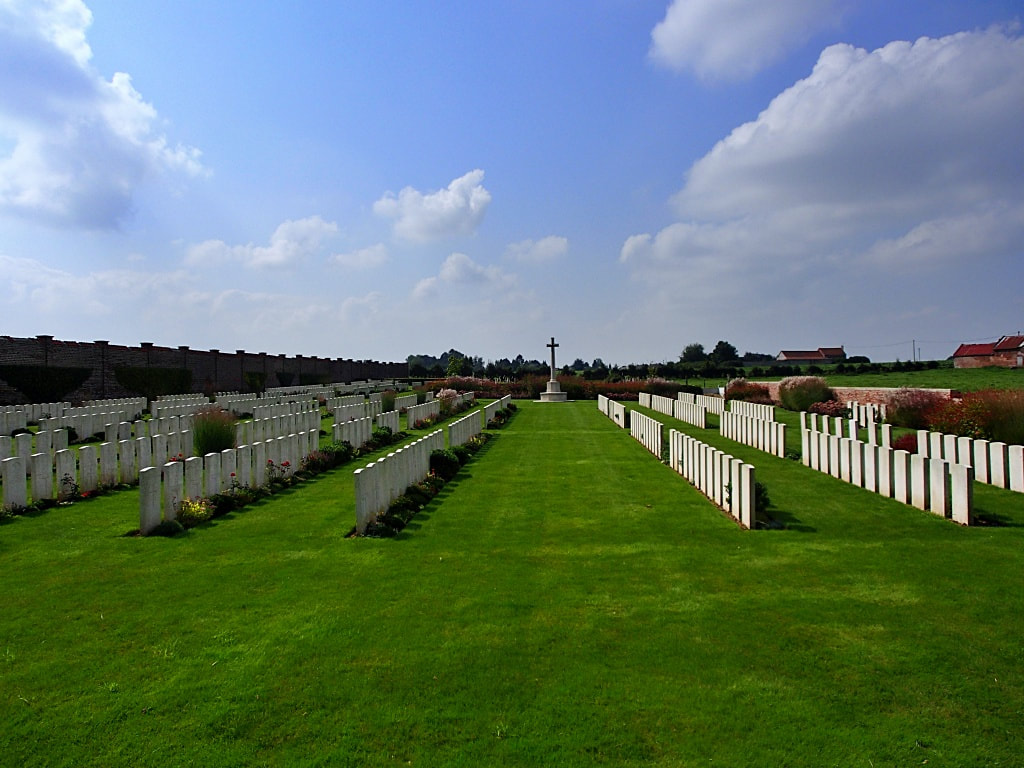 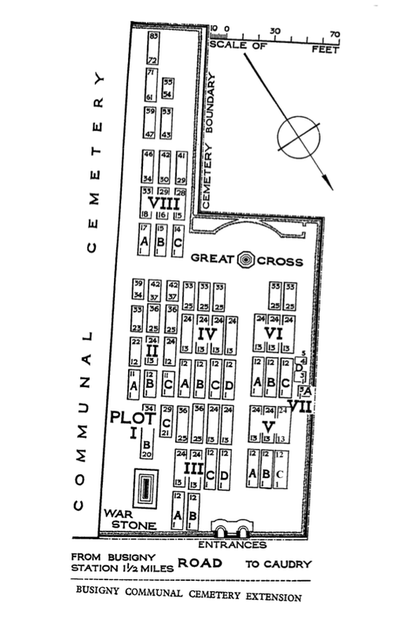 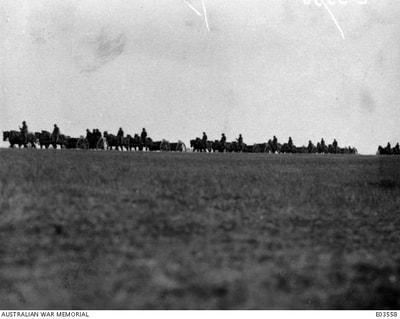 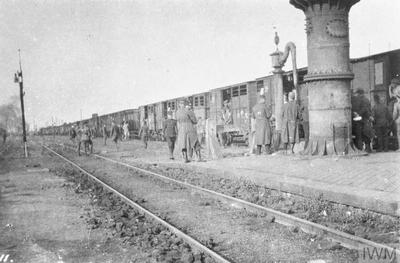 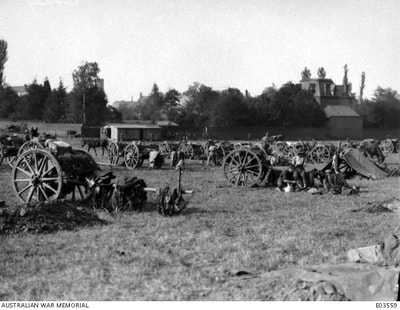 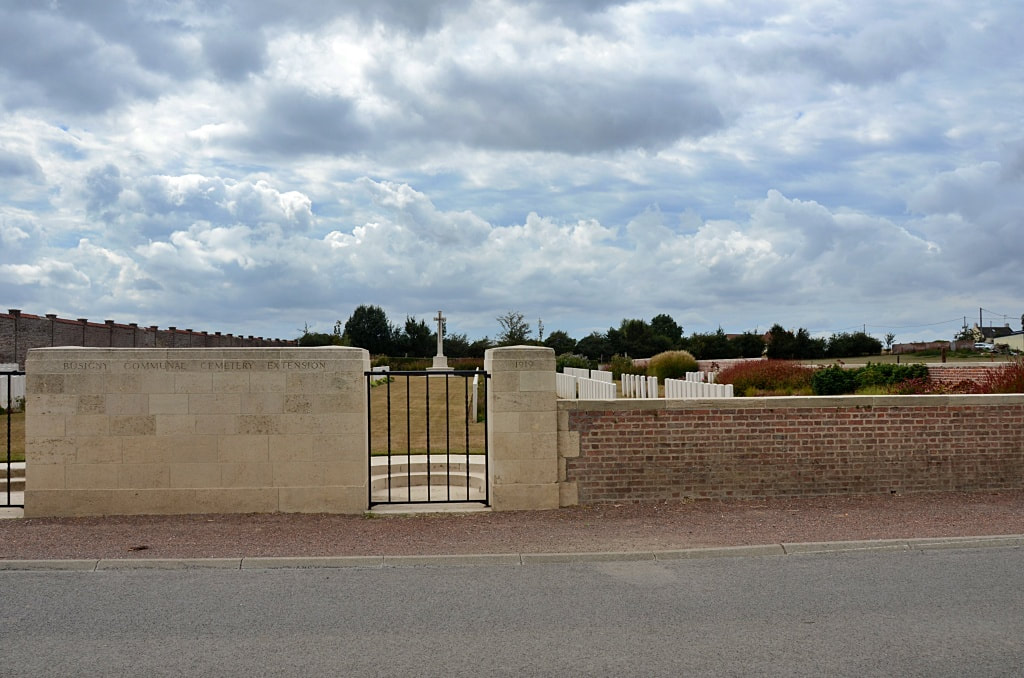 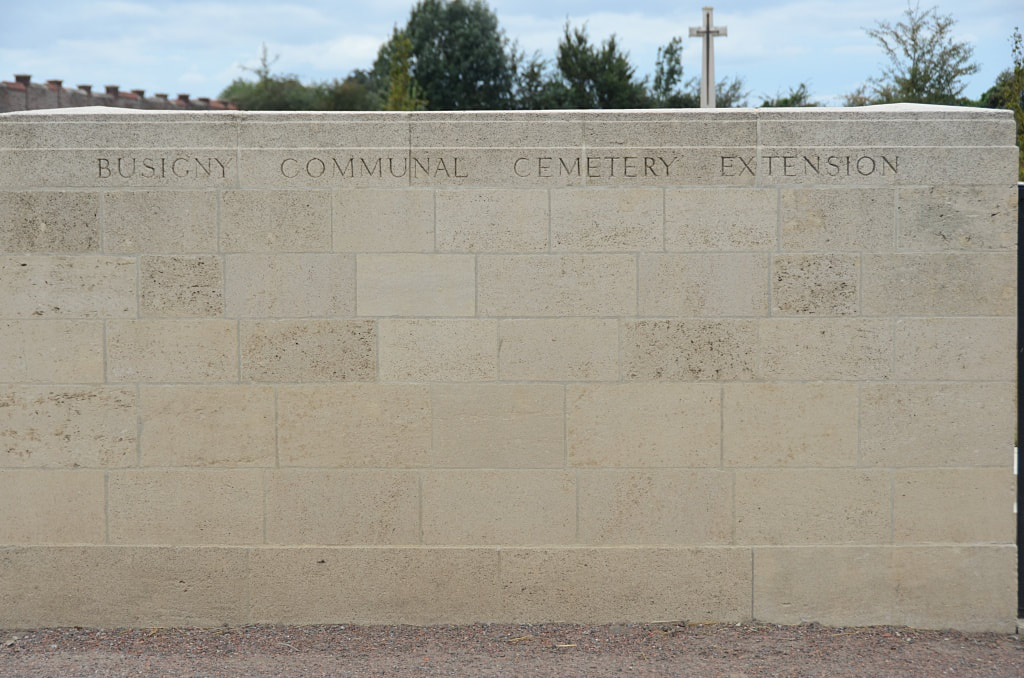 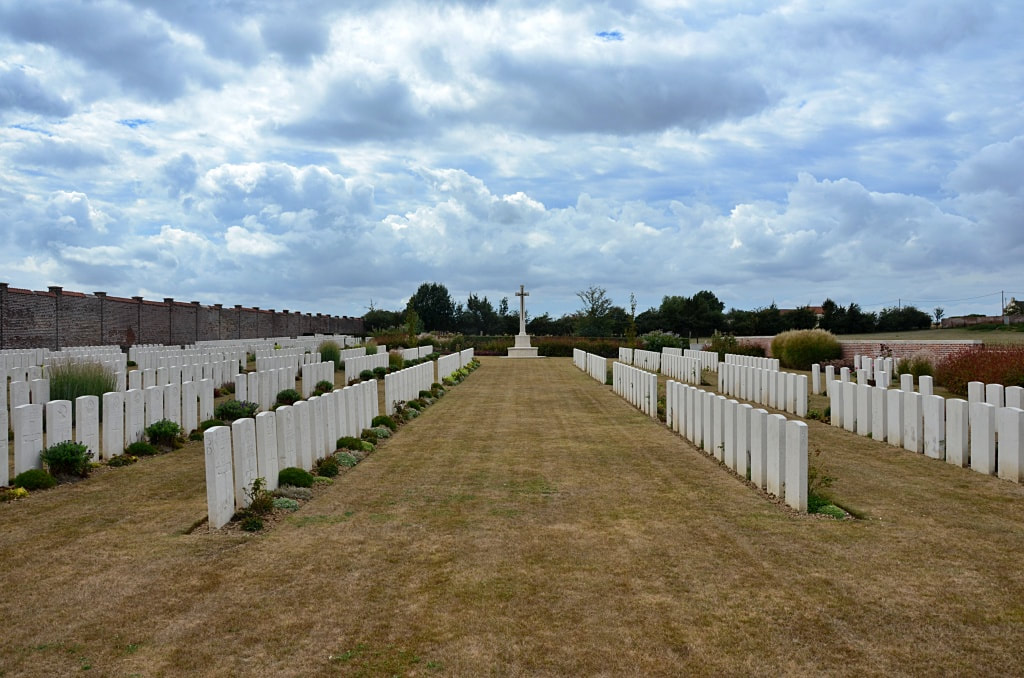 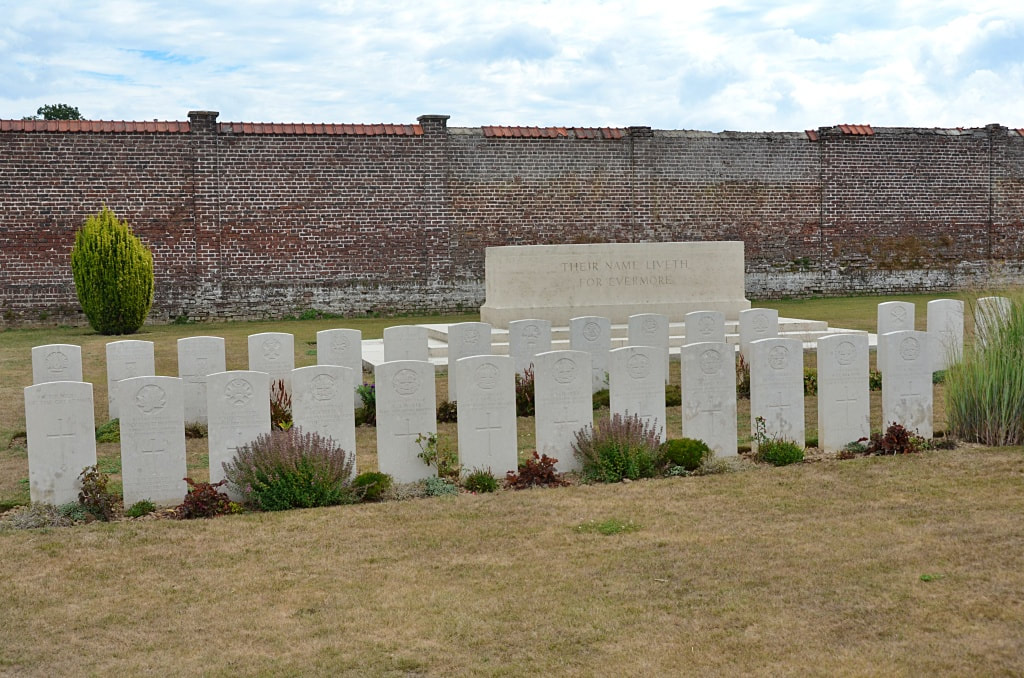 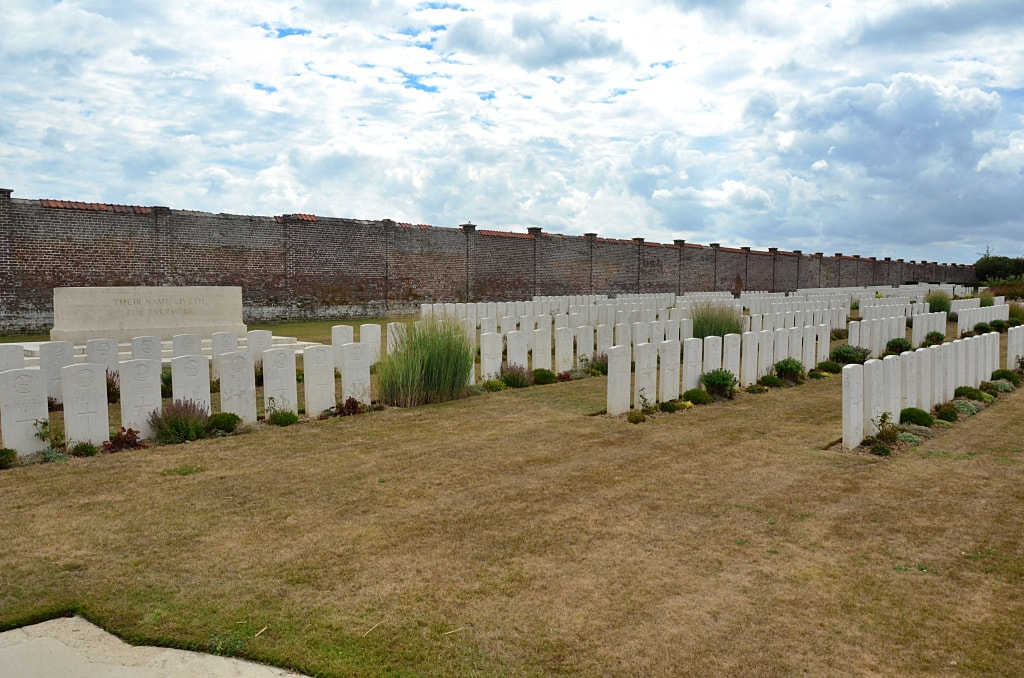 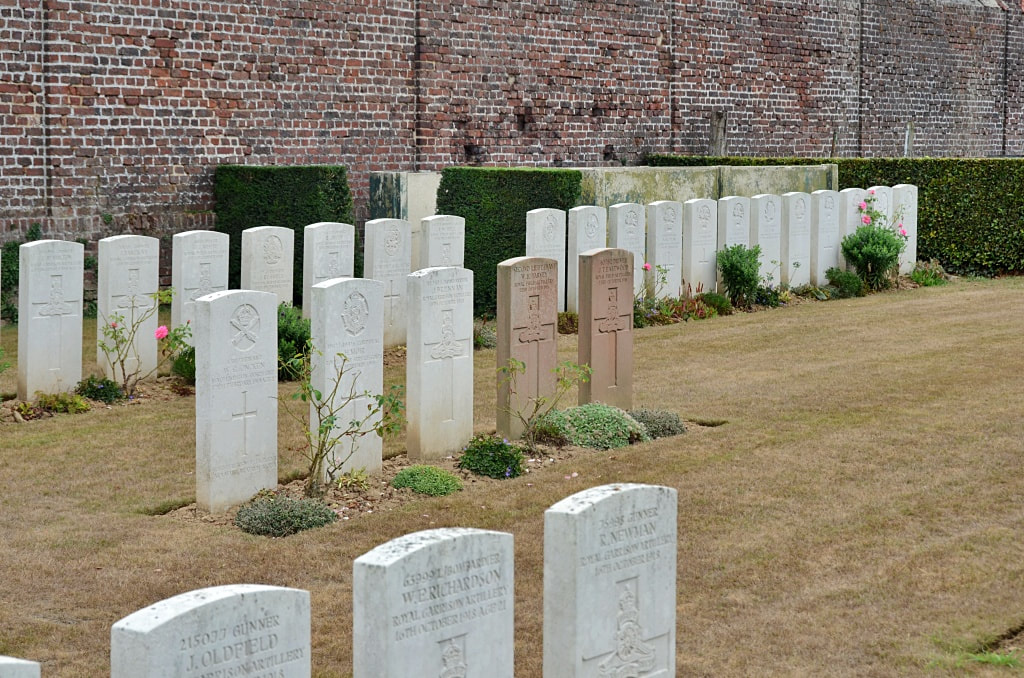 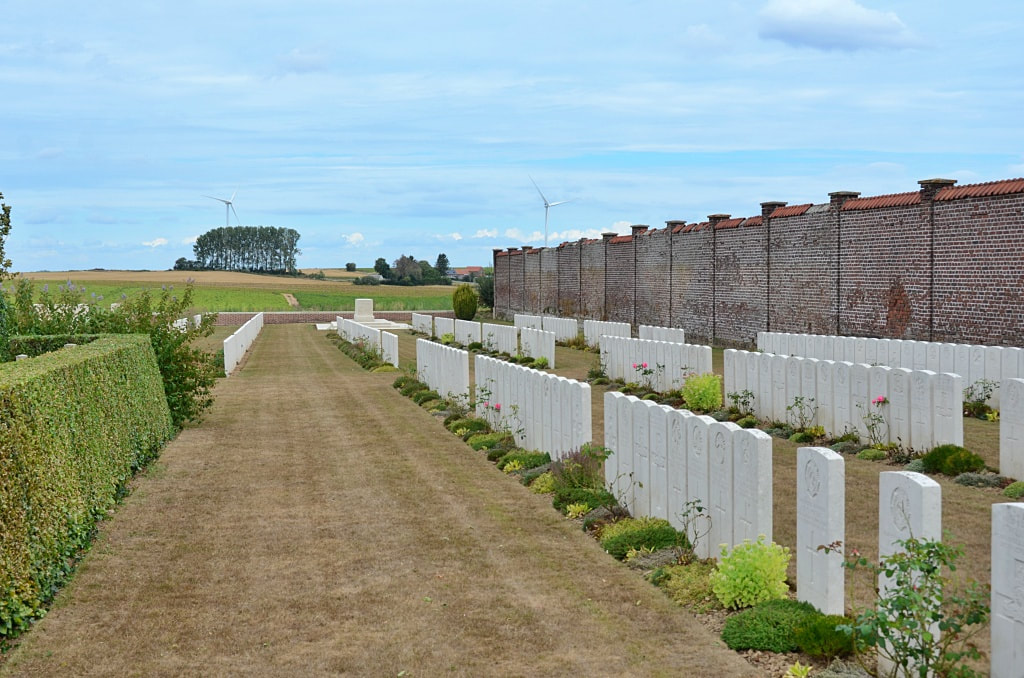 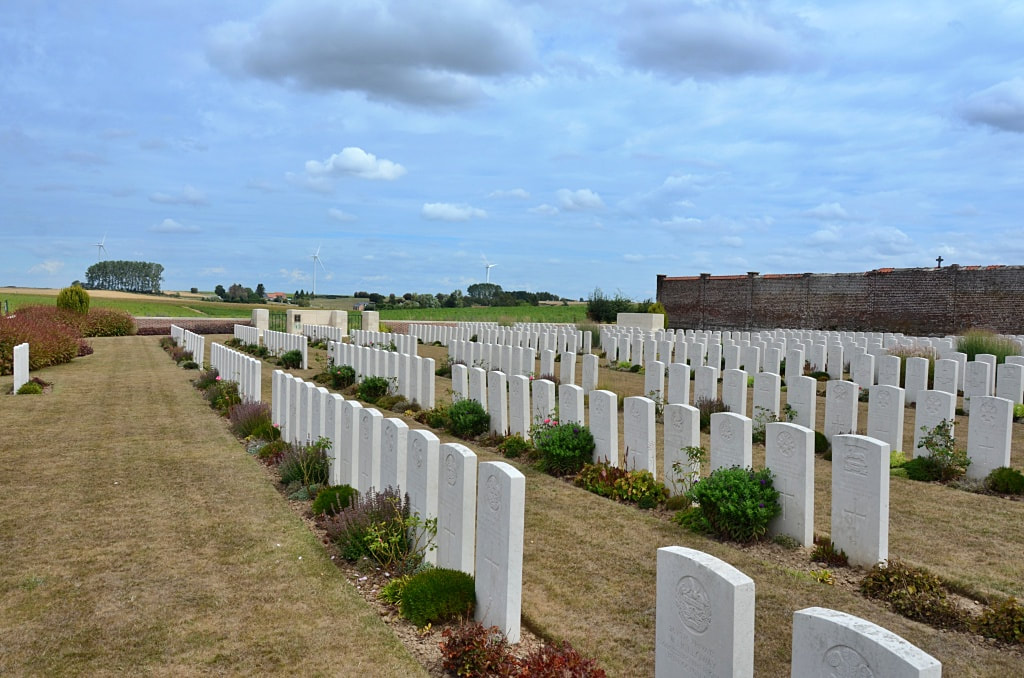 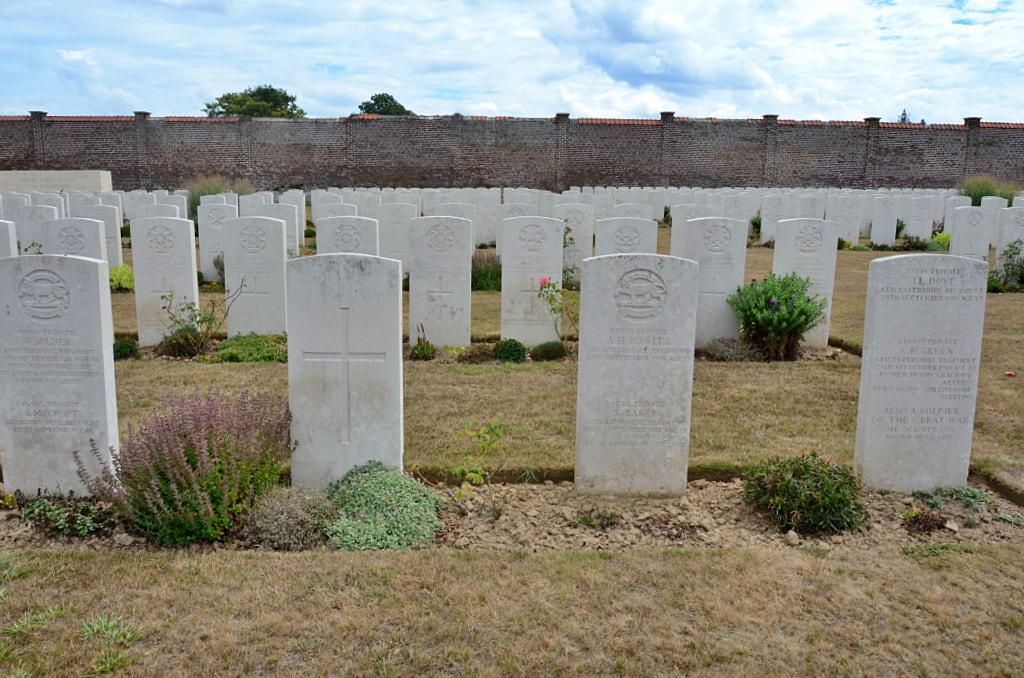 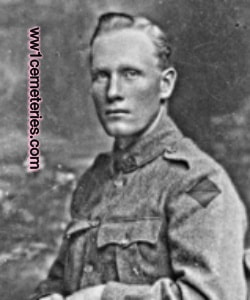 Allan Hooker of Uralla, NSW, enlisted at Liverpool, NSW on 20 July 1915 and embarked from Sydney aboard HMAT Argyllshire on 30 September 1915. He was promoted to driver on 24 April 1916 and died of pneumonia on 29 November 1918 at the Casualty clearing Station in France aged 22 years. 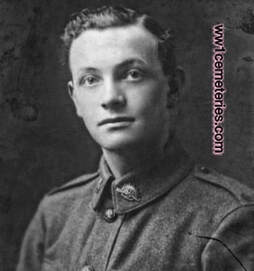 Son of James and Sophia Mary McGrath, of Cooroy, Queensland.

A labourer prior to enlisting in August 1915, he embarked from Sydney with the 11th Reinforcements on board SS Hawkes Bay on 21 October 1915. Upon arrival in Egypt in March 1916, he was transferred to the 54th Artillery Battery. Gunner (Gnr) McGrath arrived in France on 30 June 1916. In July 1917 he became ill and was hospitalised several times over the following months. He rejoined his unit on the Western Front in September 1917 but was ill again between March and June 1918. Gnr McGrath was killed in action on 22 October 1918 near the village of St Martin, Proyart, France when a shell landed in his dug out. He was 20 years of age. Gnr McGrath was first cousin to 6205 Private Walter McGrath, 25th Battalion, who was killed in action on 3 October 1918.

​3298 Driver, M. Fargher witnessed the incident in which James McGrath lost his life, he wrote:

"I saw him killed by a shell which burst in a dug-out at St. Martins, a piece of shell went through his head. He came from Queensland and was buried near St. Martins, alongside Hackett's* grave, both were killed by the same shell." 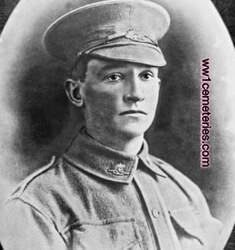 From North Adelaide, South Australia. A 26 year old labourer prior to enlisting on 22 February 1916, he embarked for overseas with the 7th Reinforcements from Adelaide on 6 November 1916 aboard HMAT Afric. Following further training in England, he arrived in France and joined the 50th Battalion in April 1917. After being wounded in action at Villers-Bretonneux, France on 26 April 1918, he received medical treatment and re-joined the battalion four months later. Pte Russell was killed in a train crash on 5 December 1918 and buried in the Busigny Communal Cemetery Extension, France.

"He was sent as an escort to some prisoners and while at Vaux-Audigny some trucks dashed into the train in which he was travelling, killing him outright. I was not with him but was sent down with seven others from the Battalion as burial party. We buried him at the British Communal Cemetery, Busigny and a cross was erected by us." 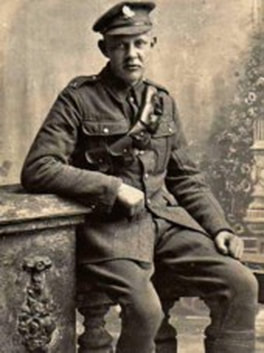 
Picture courtesy of Kath Prince, great niece of this soldier 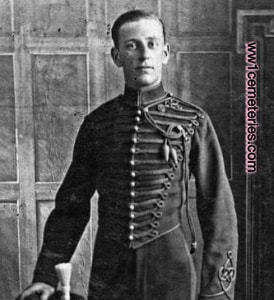 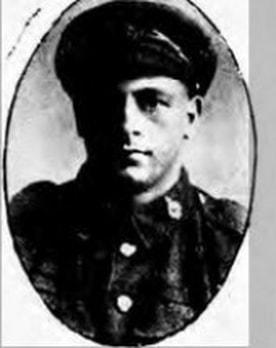 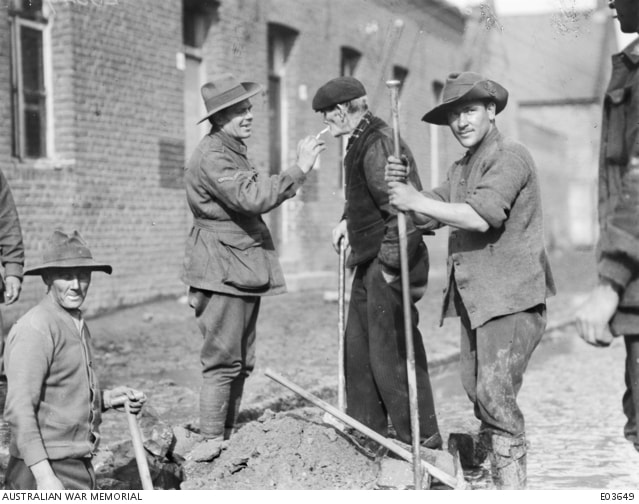 26th October 1918, Busigny: An old French villager, liberated by the Allied advance, enjoying the luxury of a cigarette given him by a member of the 1st Australian Tunnelling Company, which on this date was repairing a road through the village. Left to right: 3485 Sapper (Spr) J. J. McKinnon; 337 Second Corporal R. J. Tracy; French villager; 3640 Spr A. A. Moore.