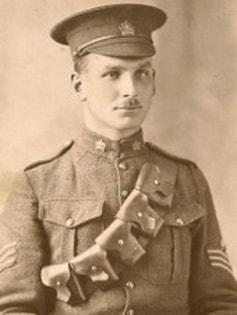 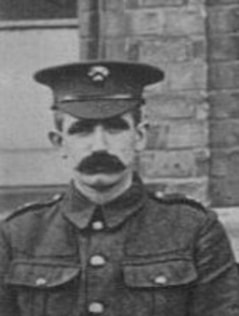 He joined the Grenadier Guards in 1914, although he was a serving Detective Constable in the Burslem Police in Staffordshire. 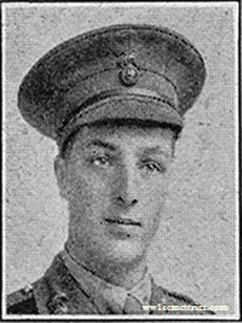 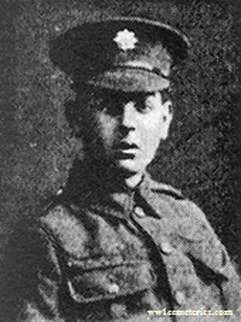 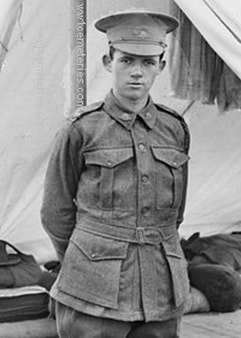 1331, 2nd Air Mechanic Alexander Hamilton Lockley, 2 Squadron, Australian Flying Corps. Later training as a pilot he was promoted to the rank of Lieutenant and served with No 4 Squadron AFC. He was killed in action on 5 September 1918. 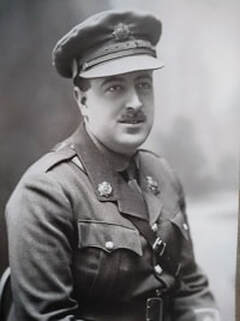 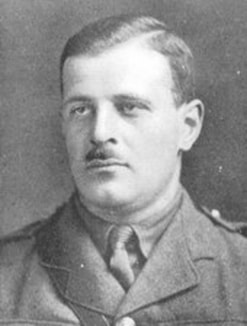 Picture and information below provided by Gordon Caldecott


John Martin was born in Edinburgh on the 28th November 1888, the son of James and Euphemia Carrack Barclay Martin. He was educated at Malvern College and Edinburgh University. He served in the College Cadet Corps as a Private for two years, then in the Officer Training Corps at University.

John joined the Army on the 14th August 1914, and was granted a temporary commission as 2Lt on the 26th August. In the Gordon Highlanders. He had also expressed an interest in the Cameron Highlanders and the Highland light Infantry. At his time of enlistment he was living at 13 Forbes Road, Edinburgh.

On the night of the 29th/30th a raid was carried out by B and D Coys on the Butte De Warlencourt and the Quarry. At midnight the two assaulting Coys, clad in white smocks and with whitened steel helmets moved up into position along tapes which were laid the night previously by Capt Martin and Capt Priday. Lt Mutch was in command of B Coy with 2Lt Kemp, 2Lt Walker, 2lt Hafford. Lt Kenyon was in command of D Coy with 2Lt Knowles and 2Lt Farster. Some difficulty was experienced in getting the men into place, but this was accomplished safely, by 1.30 am. The German wire was all cut by artillery and gaps were made in our own. During all this time there was practically no shelling by either side. Prompt to a second to zero 1.45 am our artillery of all calibres placed an intense barrage on the enemy trench in front of Butte, stokes guns, medium trench mortars and machine guns assisted. Immediately the artillery started the assaulting waves (2) commenced to cross no mans land at zero +1 minute the barrage lifted at the rate of 50 yards per minute. Practically no opposition was offered to our advance with the exception of the left flank which was held up for a short time by a MG on the left of the quarry. The waves moved steadily forward and reached the Butte after 10 minutes. The ground was in a very bad condition and full of enormous craters. B Coys objective was the Butte and dugouts in it. The right of B Coy encountered a German post and held by six men that immediately surrendered. They then entered the Butte Trench and discovered a deep dugout and trench mortar emplacement with gun in position. This was destroyed and dugout bombed. The left flank and centre of B Coy saw no trench before reaching the Butte, there they discovered several dugouts. The occupants were called upon to surrender those in the first refused so several mills were throw in one or two P bombs and a stokes bomb were thrown in, wrecking the dugout and setting it on fire. One prisoner was got out of the second which was treated similarly to number one. In the third 12 prisoners were captured and it also was wrecked. D Coys objective was the Quarry. This was reached after a short time, owing to the activities of a machine gun on the left edge. This gun was knocked out and then the advance was continued to the Quarry. Her many Germans were discovered and killed. One dugout in the right hand corner was successfully bombed. Six prisoners were reported to have been captured, but they never reached our Adv Btn Hq. The whole raid was a great success in all 17 prisoners passed through our hands. According to all reports many casualties were inflicted on the enemy. Its calculated that these amount to 50 or 60 all told. Our casualties were slight amounting at the very outside to be 16 or 17. There were three Officers, two 2Lt Farster and 2Lt Walker slightly wounded and 2Lt Knowles missing believed killed. The enemy did not put up a fight at all. No barrage was placed on our lines and no SOS signal were seen. It is thought that owing to the quietness that they were absolutely deceived as to our intentions and no thought of our attack occurred to them. On the admission of one of the prisoners who spoke a little English, it came as a complete surprise. The following message was received from the Div. The GOC congratulates you and your brigade on the operation so successfully carried out.

Brig Gen Marshall adds. I wish to thank all ranks for the trouble taken in preparing for the raid, and gallantry displayed in the execution. About 3.15 am the dugouts on the Butte were blazing merrily at this hour an explosion occurred there and flames rose about 30 feet in the air, bombs and SAA were also heard exploding, at 10 am this morning the Butte was still smoking.

Capt Martin was awarded the Military Cross for this action, it appears in the London Gazette on the 12th March 1917. His citation reads,

`For conspicuous gallantry and devotion to duty. He displayed marked courage and ability in organising the arrangements previous to a raid. Later, during the raid, he personally supervised the guiding of the assaulting troops`.

The Battle of Arras

At 2.30 am on the 9th April 1917, the Btn began to move forward to assembly trenches for the attack. The Btn was reported in position at 4.30 am, one hour before zero, no casualties having occurred and the enemy’s suspicions apparently not having been aroused. The position of the Btn as follows- A Coy under Capt John Martin MC, right front. B Coy under Capt W McCall, on the left front. D Coy under 2Lt B Burnett, in support. C Coy under Lt P Booth, in reserve. Strength Officers 20 OR`s 702.

At 5.30 am Zero our barrage opened with a thunder of sound and our support and reserve Coys moved out of their trenches. At 2 minutes in accordance with the plan, the front Coys climbed from their trenches and moved forward. The movement was made in perfect order, a tendency on the part of the men to follow our barrage too closely being the only problem calling for Officers control.

John’s will states that his estate of £122 9 5, was to go to his Father. James Martin Solicitor Supreme Courts of 13 Forbes Rd Edinburgh. All his personal effects were sent home, and collected by his father. In a letter dated 5th May 1917, the following items are sent home,

"Sir, I am directed to inform you that a report has been received which states that the late Capt J Martin 8th Gordon Highlanders, is buried at Blangy Cross roads, North East of Arras. The grave has been registered in this office, and is marked by a durable wooded cross with an inscription bearing full particulars. John Martin is buried in Cabaret-Rouge British Cemetery, Souchez, Pas de Calais France, XVII. J. 48. Portraits of John Martin can be found in, Watsonians who served in the Great War and the University of Edinburgh Roll of Honour. His medals were sent to his father at 61 Queens St Edinburgh, which appears to be his offices on the 9th August 1917. His Military Cross was sent on the 15th June 1917. To my knowledge only his Memorial Plaque survives." 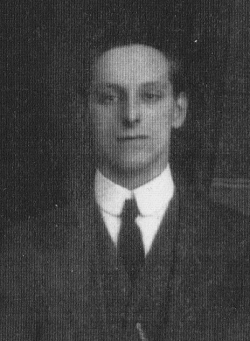 Son of Frank and Mary Oldham of Haughton; husband of Emma Oldham of Denton and commemorated on her gravestone in Denton Cemetery.

Tom was a warehouseman at Cheetham's hat-works in Hyde, Cheshire. He enlisted with the Royal Garrison Artillery on 8th December 1915 and was shipped to France on 5th October 1916. He was killed in action on Saturday morning 11th August 1917. Sergt. Strike wrote to his widow, "Poor Tom met his death about 8.30am this morning. He along with his section were stood near the gun when a shell burst close by killing two and wounding four... he died immediately. He was ever ready to do anything and was an asset to the battery... (he) was loved and respected by all."

His grave is adjacent to that of James William Lythgoe of Burnley Road, Failsworth who was killed at the same time. The son of Mrs Olivia Billington, he was a packer at the cotton mill who enlisted on October 15th 1914 aged 23 and died of wounds. 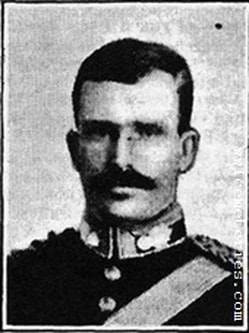 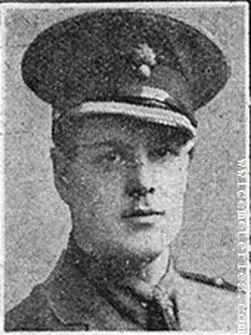 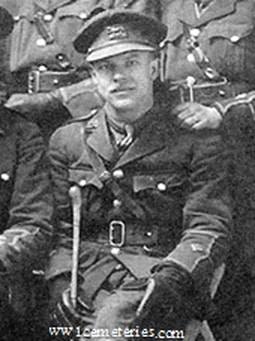 Son of the Rev. Canon Pitts, of The Rectory, Loughborough. 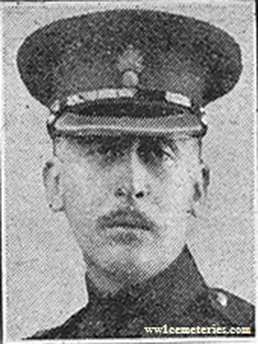 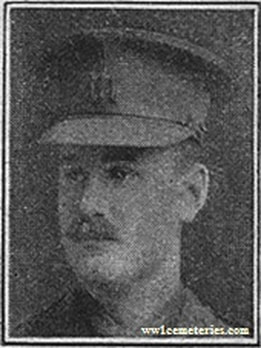 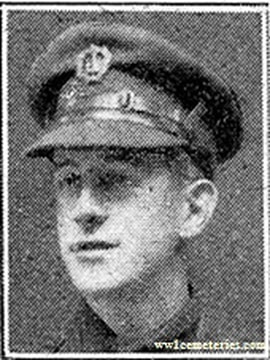