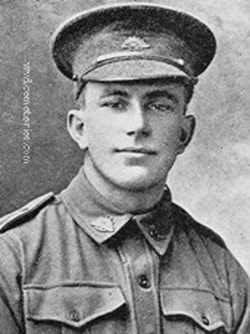 Son of Job and Rosamond Maslin. Native of South Australia. 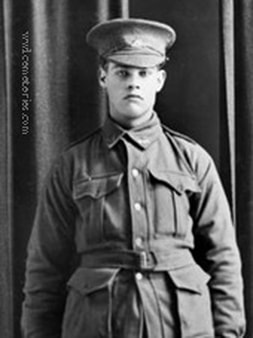 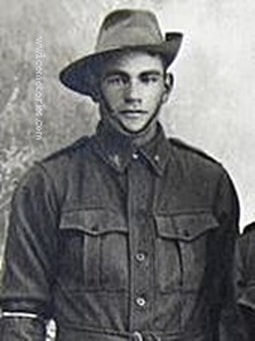 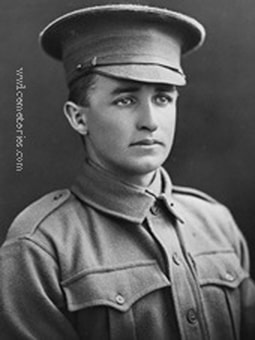 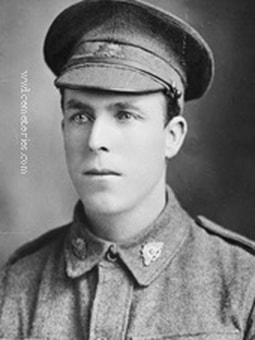 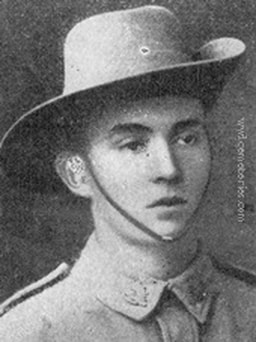 Son of Albert and Rose Reiman, of The Range, Cordalba, Queensland. Native of Maryborough, 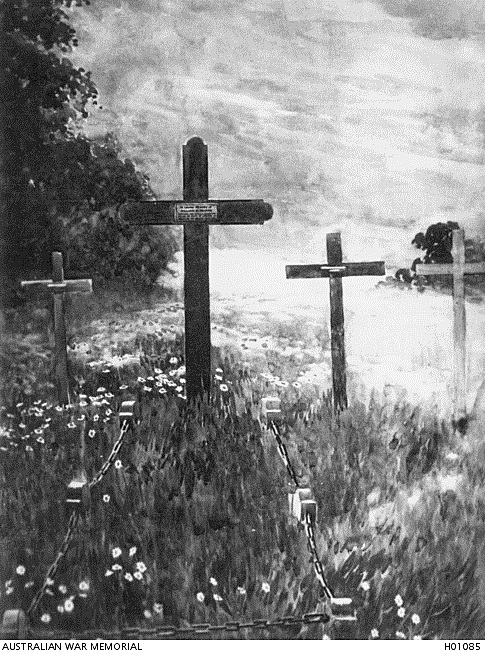 1918. Image of the original grave at Dernancourt of, William S. Rowan, he was Secretary of the Australian Young Men's Christian Association, he was attached to the 4th Div. Area, Australian Imperial Force. William S. Rowan was killed whilst on duty on 14th January 1917 and buried in the cemetery at Dernancourt. He is now to be found in Plot IV. G. 15. of the Communal Cemetery Extension. He was the son of William George and F. E. Rowan (step-mother), of 24, Grace St., Malvern, Melbourne, Australia 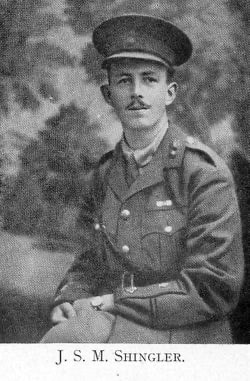 The information below supplied by 'The Ellesmerian Club', the alumni organisation for Ellesmere College where John was a pupil.

John Stanley Marsh Shingler, the elder son of John and his wife, Sarah Elizabeth, was born in Collins Street, Melbourne, Australia in January 1893. The family arrived back in England in October 1903 and it was in 1909, just after his 16th birthday, that John found himself entering the ‘Conqueror’ dormitory at Ellesmere College. His family were resident in the town at Brownlow Road.

In the next three and a half years he threw himself into college life and, by the time he left in July 1912, he was Captain of School. As soon as he arrived at the college, his name started to appear in the sports teams and he made his debut in the ‘Conqueror’ football match in 1909 in his first term. From then he took a very active part in all the major sports – football, hockey and cricket, was appointed Captain of Tennis in 1912 and Secretary to the Games Committee.

Off the sports field, he took part in many drama productions and was a member of the Debating Society. Academically, he passed all his Oxford Local Exams and he progressed through the ranks in the Officer Training Corps being promoted Sergeant. His contribution to college life was recognised as he was first appointed dormitory Prefect, then promoted to Prefect of Hall and Prefect of Chapel before his final appointment as Captain of School. However, his association with the college did not cease there as, in the winter term of 1912, he was back as a member of staff. He remained for a further two years until he started to study for law Mr. Rutter’s practice in Ellesmere itself.

John joined the 4th (Denbighshire) Battalion (Territorial), the Royal Welch Fusiliers as a 2nd Lieutenant on 11thNovember 1914 and was posted to France on 6th March 1915, where he spent the spring in trenches at Festubert. He took part in the unsuccessful assault on Aubers Ridge in May 1915 when his battalion suffered heavy losses. A report in the Liverpool Echo (15th December 1915) details correspondence they received from John at “the Front”. The letter indicates there were still moments of normality in life in France as John was playing in goal when his battalion challenged members of the Divisional Ammunition Column to a game of hockey. The article recorded that “the ground was, as may be expected, somewhat rough, but this in no way detracted from the spirit or ardour of the game. The battle raged up and down the field with great vigour, but no definite result was arrived at. In spite of the fact that the teams were not in practice, and recently been engaged on important operations in their respective sphere, the game was very fast and well contested, until the referee’s whistle put an end to a thoroughly enjoyable contest”.

He was promoted temporary Lieutenant on 2nd March 1916 and confirmed in that rank the following June. On 20th July 1916, he was promoted Acting Captain. John was a specialist Mining Officer in operations at Messines Ridge where, at 0250hrs on 7th June 1916 the British Army, having stopped the artillery barrage on the German lines, detonated over four hundred tons of high explosive that had been placed in a network of some 8,000 yards of tunnels excavated below the ridge. Over ten thousand Germans died instantly and the British forces reached their objectives within twelve hours.

John was awarded the Military Cross for his actions on 11th & 12th June 1917 at Bluff Tunnels in the Battle of the Somme. His citation read: “For conspicuous gallantry and devotion to duty at a critical moment when hostile shell fire was constantly concentrated upon his platoon, who were at work in a trench. He steadied and collected his men, going up and down the trench for the purpose, and showing utter disregard of his own safety whilst doing so. He then led them from the shelled area, afterwards taking them back to their work and completing it with success before daylight. Throughout the operations, he has displayed coolness and untiring energy when employed on similar work.”

John commanded ‘D’ Company but lost his company in the battalion in the re-organisation of 27th January 1918 when his company was split into three platoons and transferred, one to each of the other Companies. He later commanded ‘A’ Company and for the rest of the war John’s unit operated as a Pioneer Corps building trenches, roads, and rail systems to keep the Allied emplacements supplied.

He was wounded in the back, almost certainly by sniper fire, on 2nd September 1918 during mopping up operations at St. Pierre Vasst Wood.  John died two days later at a Casualty Clearing Station. He was buried in Dernancourt Cemetery Extension and his life is commemorated on War Memorials at Ellesmere College and at St. Mary’s Church, Ellesmere. 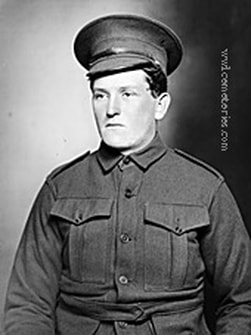 Son of John and Catherine Smith, of Hotspur, Victoria, Australia. 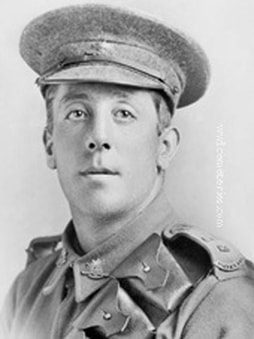 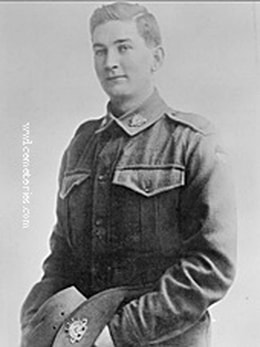 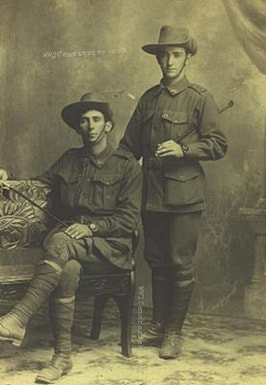 Jack lived out a full life in Queensland, Australia
.
Picture and information courtesy of Murvyn and Jack's nephew, John Williamson 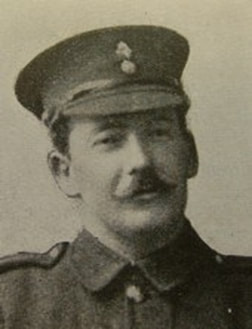 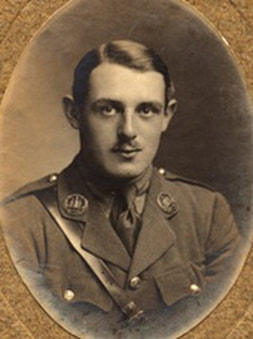 He died of wounds at 45th Casualty Clearing Station on 18th February 1917 after being wounded by a gunshot wound to the chest at Boom Ravine on 17th February, possibly by machine-gun fire whilst crossing Grandcourt Trench.

He was brother to Cecilia Clara Winkworth and John Staverton Winkworth.
"Lest We Forget"