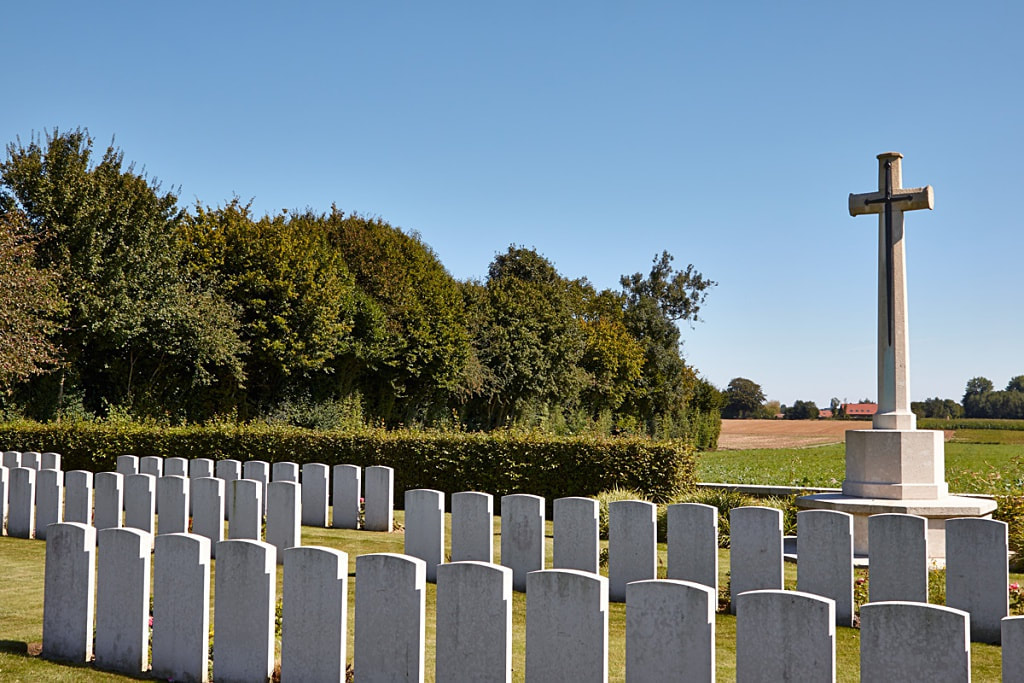 
TWO SPECIAL HEADSTONES IN FIENVILLERS BRITISH CEMETERY
​
Visitors with an attentive eye may have noticed two headstones that stand out from the rest in Fienvillers British Cemetery. At first glance, you might think the wrong material was used for those two headstones. However, historical research has revealed the truth. Originally, all the headstones were erected in Stancliffe sandstone. Later, in the 1950's all, except for those two, were replaced by headstones of Portland stone. At that time, it was believed that the soft Stancliffe sandstone would not wear as well and that Portland would be easier to maintain. However the two surviving headstones in sandstone disprove this theory.

The cemetery was made by the 38th and 34th Casualty Clearing Stations which were posted at Fienvillers in the summer of 1918. It was begun in May 1918 and used until the following September, and one grave was brought in after the Armistice from an isolated position near Bernaville. 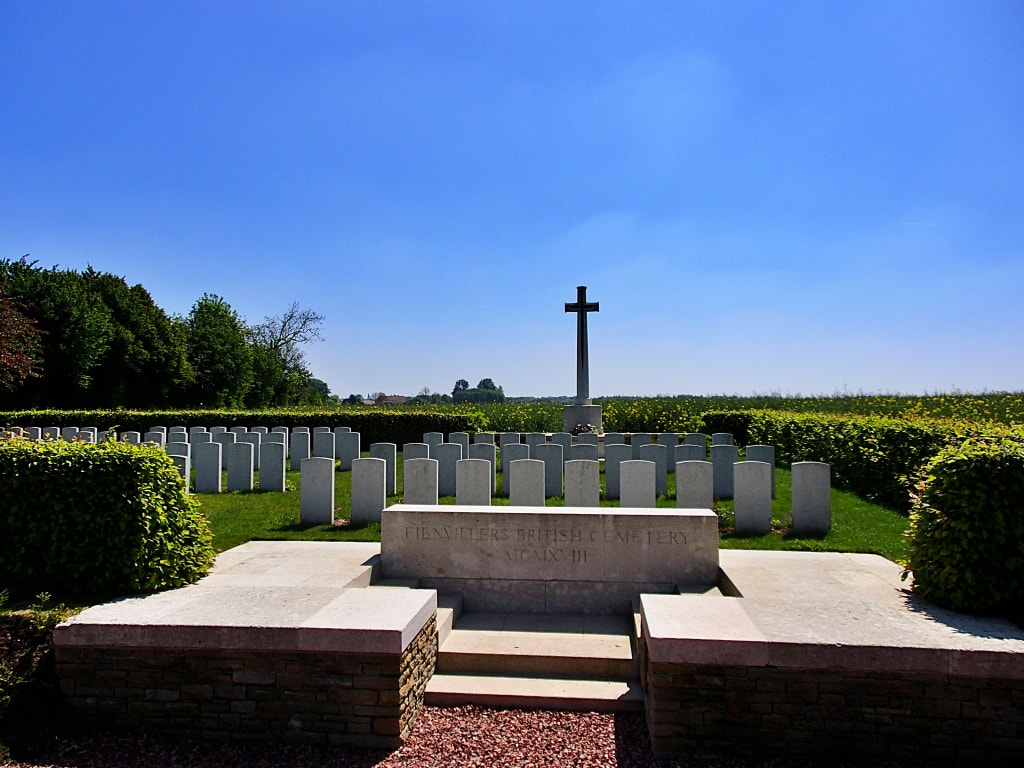 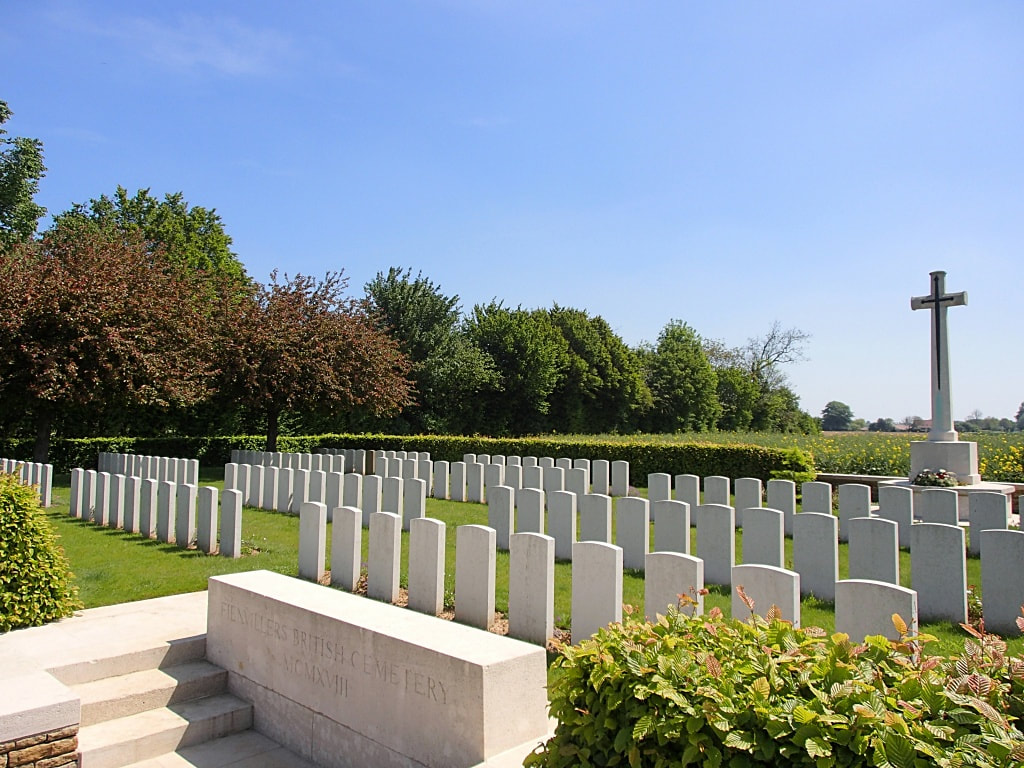 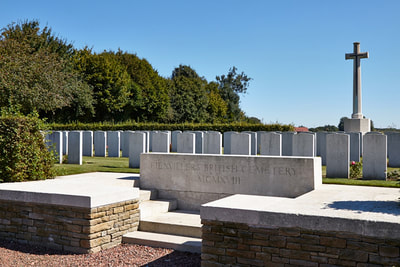 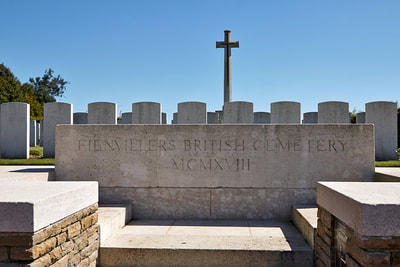 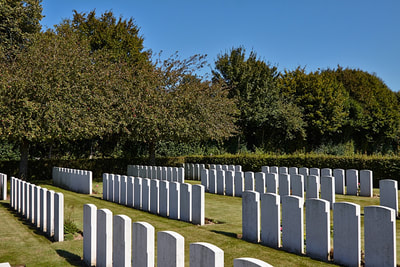 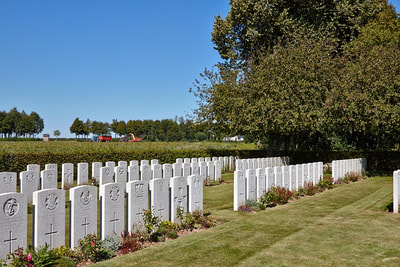 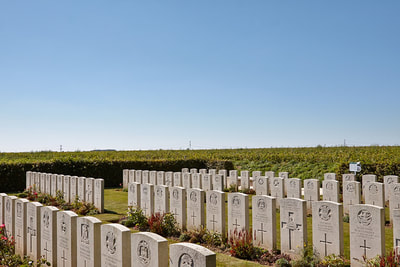 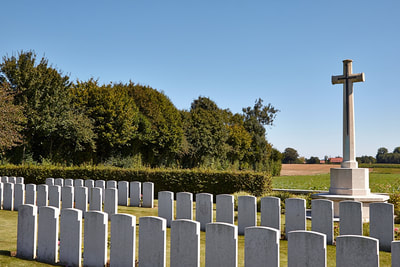 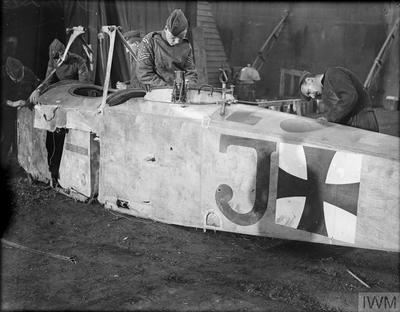 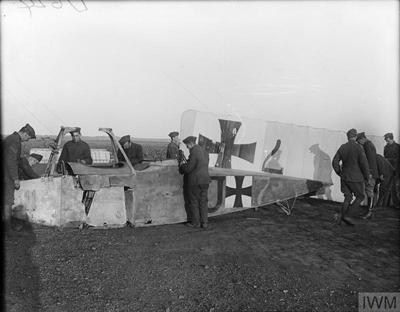 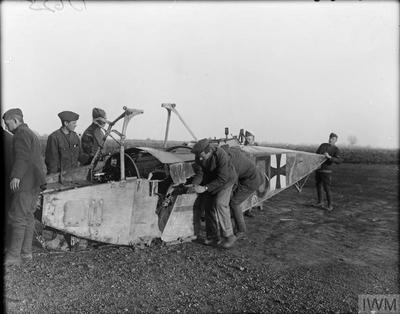 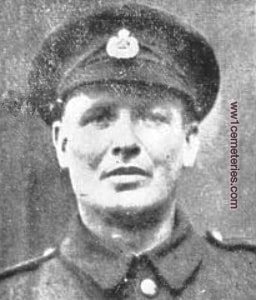 Son of the late Alexander and Isabella Brown Aitken, of Innerleithen.

His headstone bears the inscription; "He died, that we may live." 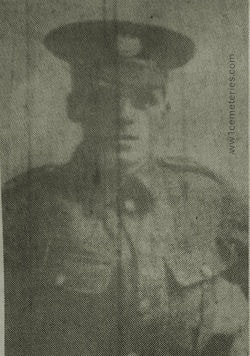 Son of William Dean, of 5, Trafalgar Square, Ashton-under-Lyne. Also served at the Dardanelles. 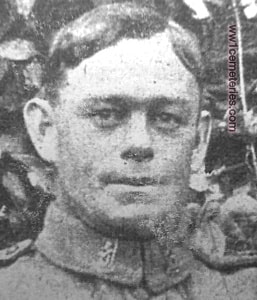 Son of G. B. Murfitt, of Rangiora, Christchurch, New Zealand. 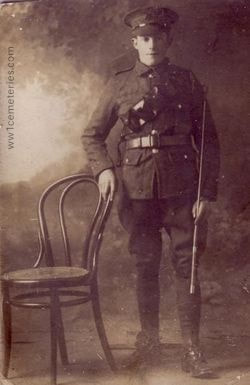 His headstone bears the inscription "Fold Him O Father, In Thine Arms, And Let Him Henceforth Be" 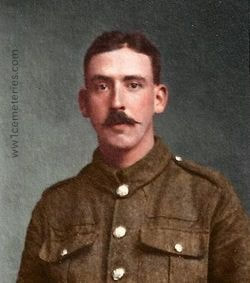 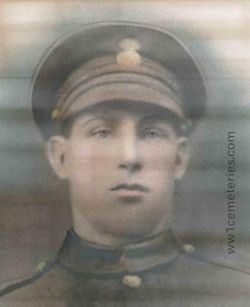 His headstone bears the inscription "His Battles Are Over, And God Thought Best To Take Him To Eternal Rest"

He was an early volunteer, enlisting in Sept 1914. In the evening of 4 Aug 1916, Anderson had been in a working party carrying rations to the front line, but started to go back. When accosted by an  officer, he said: ‘I am going out. I can stick it no longer. My nerves are gone’. He was apparently let pass — & in due course found asleep in his dugout.
Examined by the battalion MO, the report was that there was nothing wrong with him, no evidence of nervous exhaustion & — in terms — no sign of shell-shock.

At trial, Anderson said (but not on oath) that in June 1916 he had been buried in a dugout & had a nervous breakdown, spending some weeks in hospital. In March he had been sent to hospital for chronic bronchitis. On the night in question his nerves were ‘all shook up’ due to the shelling.

No character witnesses were available, the 2 officers sought being amongst recent casualties. In mitigation, Anderson said that 2 brothers had been killed in France & another wounded at Gallipoli.  He also mentioned that he had taken part in the battle of Loos in 1915.

The CO — without personal knowledge of Anderson, who had only been with the battalion since 24 July — opined that Anderson was so frightened of shell-fire that he deliberately prepared to take his chance of the consequences rather than remain under it; & that he was not worth keeping, & deserved execution for the sake of example.  The other commanders all concurred. (Corns, pp. 199-200, 212) 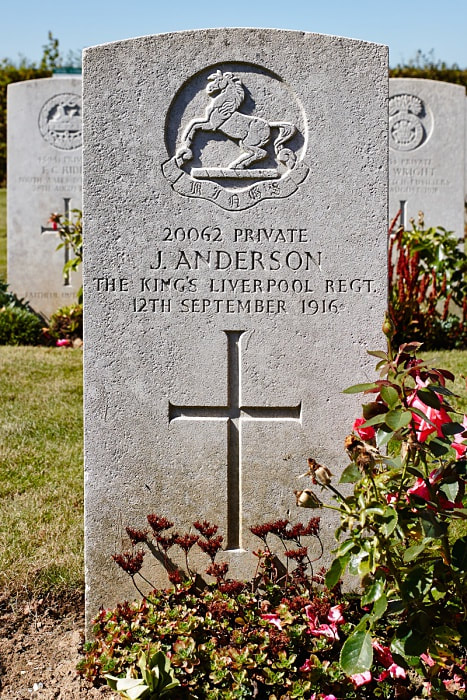 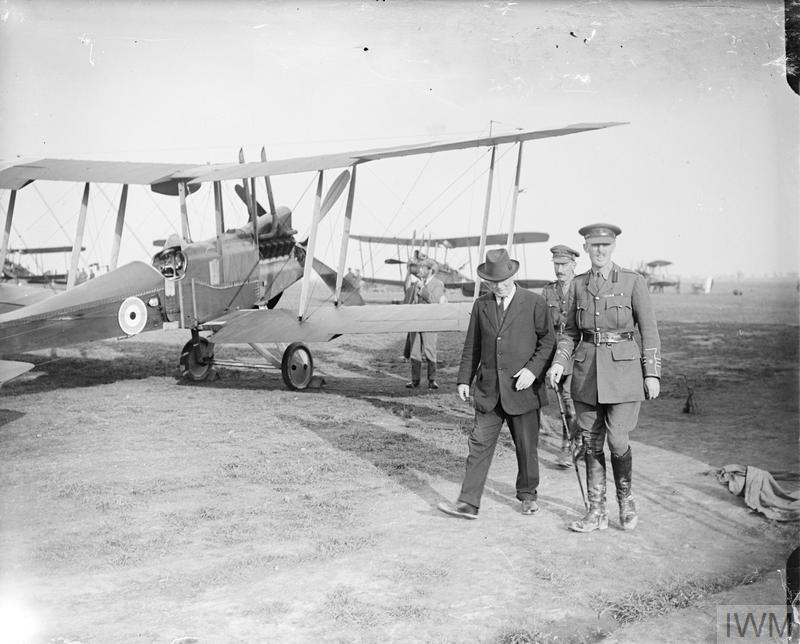 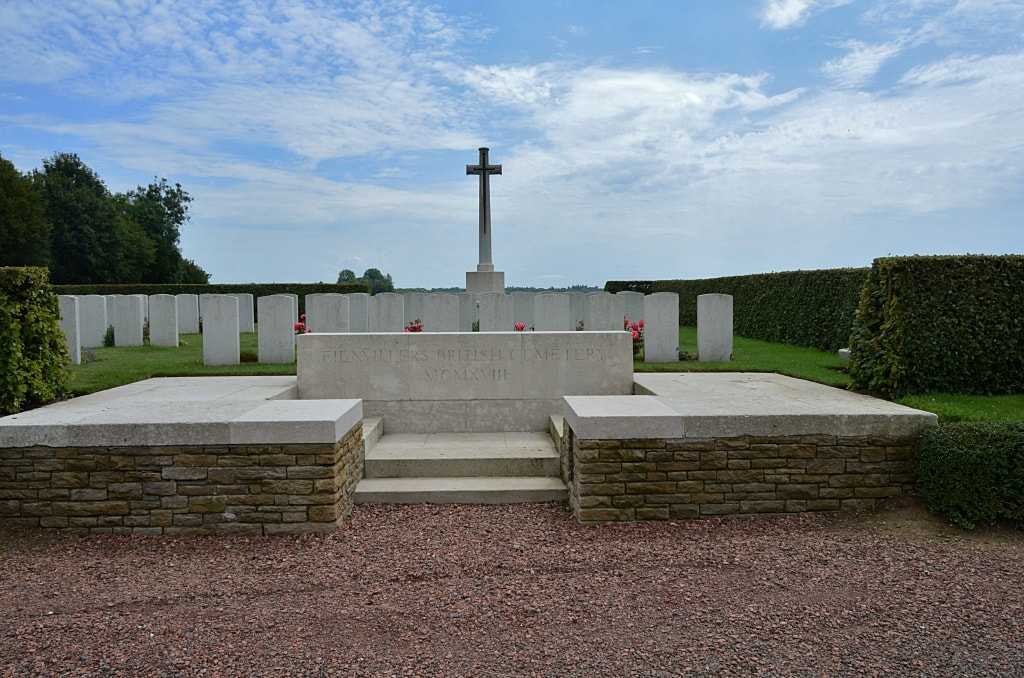 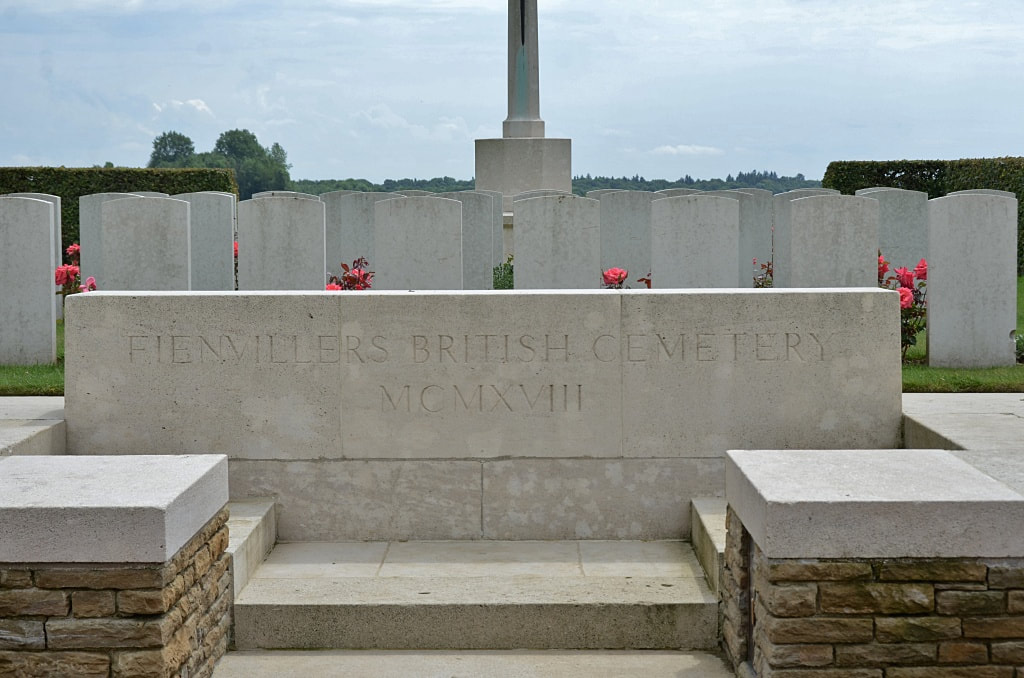 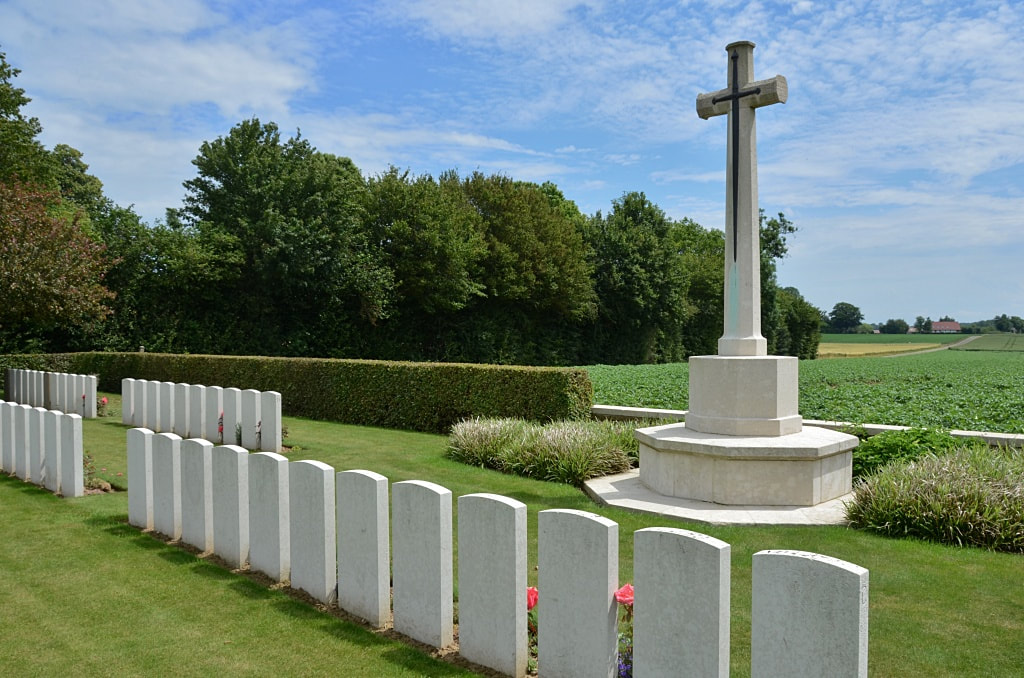 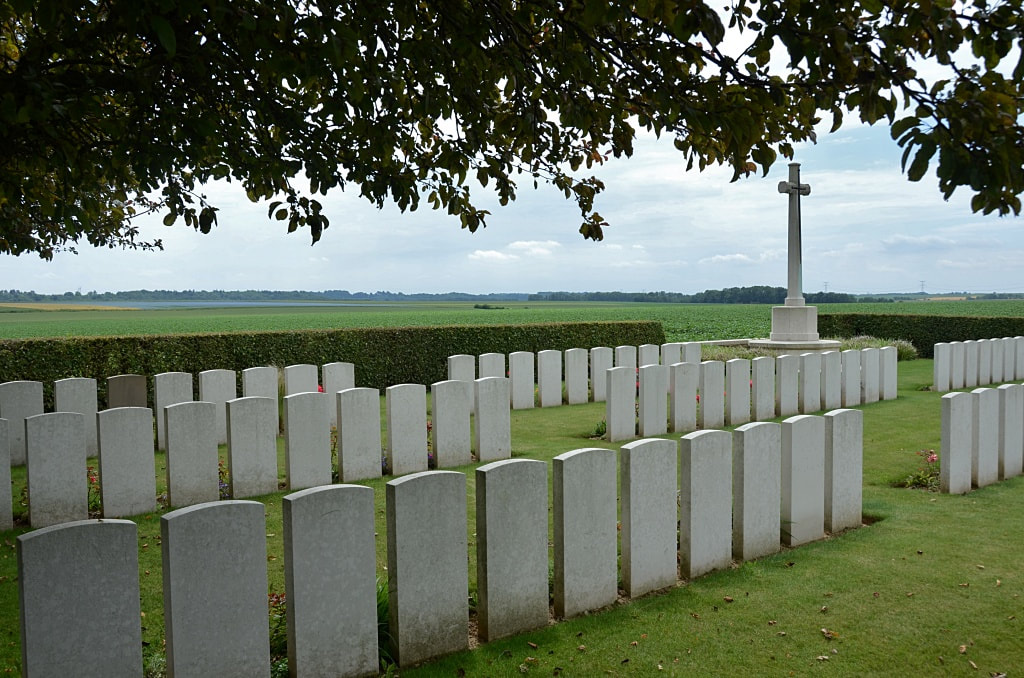 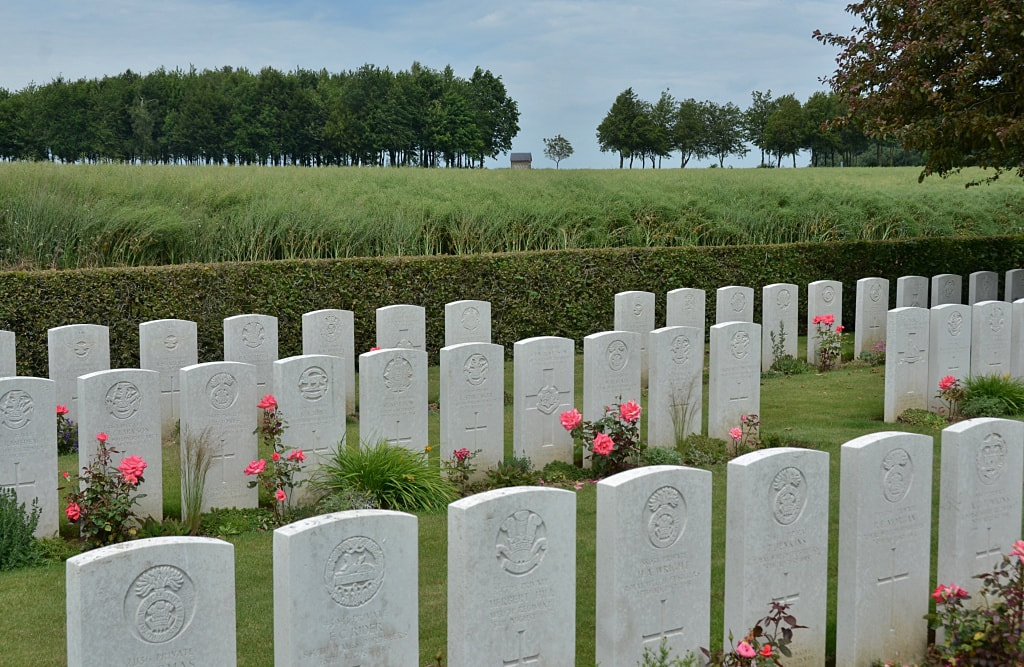