Maricourt is a village situated on the D938, Albert-Peronne Road, 10.5 kilometres from Albert.

Péronne Road Cemetery is on the western outskirts of the village.

Maricourt was, at the beginning of the Battles of the Somme 1916, the point of junction of the British and French forces, and within a very short distance of the front line; it was lost in the German advance of March 1918, and recaptured at the end of the following August.

The Cemetery, originally known as Maricourt Military Cemetery No.3, was begun by fighting units and Field Ambulances in the Battles of the Somme 1916, and used until August 1917; a few graves were added later in the War, and at the Armistice it consisted of 175 graves which now form almost the whole of Plot I. It was completed after the Armistice by the concentration of graves from the battlefields in the immediate neighbourhood and from certain smaller burial grounds, including:-

AUTHUILE COMMUNAL CEMETERY EXTENSION, which was on the South side of the Communal Cemetery. It contained the graves of 108 French soldiers and those of 23 from the United Kingdom who fell in 1915 and early 1916.

BRIQUETERIE EAST CEMETERY, MONTAUBAN, on the East side of the brick-works between Maricourt and Montauban, containing the graves of 46 soldiers from the United Kingdom who fell in the latter half of 1916.

CARNOY COMMUNAL CEMETERY EXTENSION, in which 36 French soldiers and one from the United Kingdom were buried in March 1918.

CASEMENT TRENCH CEMETERY, MARICOURT, on the West side of the road to the Briqueterie, in which 163 soldiers from the United Kingdom and one from South Africa were buried in 1916-1918.

FARGNY MILL FRENCH MILITARY CEMETERY, CURLU, on the North bank of the Somme, in which six soldiers from the United Kingdom and two from Australia were buried in 1916-1918.

LA COTE MILITARY CEMETERY, MARICOURT, a little way West of Peronne Road Cemetery, containing the graves of 38 soldiers from the United Kingdom and one from Australia who fell in 1916-1917.

MARICOURT FRENCH MILITARY CEMETERY, on the South side of the village, containing the graves of two soldiers from the United Kingdom who fell in December 1916.

MONTAUBAN ROAD FRENCH MILITARY CEMETERY, MARICOURT, in which six men of the 1st/8th King's Liverpools were buried in August 1916.

TALUS BOISE BRITISH CEMETERY, CARNOY, between Carnoy and Maricourt, at the South end of a long copse. It was used in the latter half of 1916 and (chiefly by the 5th Royal Berks) in August 1918, and it contained the graves of 175 soldiers from the United Kingdom and five from South Africa.

There are now 1,348, 1914-18 war casualties commemorated in this site. Of these, 365 are unidentified and special memorials are erected to 26 soldiers from the United Kingdom known or believed to be buried among them. Other special memorials record the names of three soldiers from the United Kingdom, buried in other cemeteries, whose graves could not be found.

The cemetery covers an area of 3,787 square metres and is enclosed on three sides by a low red brick wall.

​His headstone bears the inscription; "When My Spirit Enters To Its Rest My Lips Shall Say "I Too Have Known The Best""

Citation: An extract from the "London Gazette," dated 30th April, 1918, records the following:-"For most conspicuous bravery, determination, and gallant leading of his command. The enemy attacked on the right of the battalion frontage and succeeded in penetrating the wood held by our men. Owing to successive lines of the enemy following on closely there was the greatest danger that the flank of the whole position would be turned. Grasping the seriousness of the situation, Colonel Anderson made his way across the open in full view of the enemy now holding the wood on the right, and after much effort succeeded in gathering the remainder of the two right companies. He personally led the counter-attack and drove the enemy from the wood, capturing twelve machine guns and seventy prisoners, and restoring the original line. His conduct in leading the charge was quite fearless and his most splendid example was the means of rallying and inspiring the men during the most critical hour. Later on the same day, in another position, the enemy had penetrated to within three hundred yards of the village and were holding a timber yard in force. Colonel Anderson reorganised his men after they had been driven in and brought them forward to a position of readiness for a counter-attack. He led the attack in person and throughout showed the utmost disregard for his own safety. The counter-attack drove the enemy from his position, but resulted in this very gallant officer losing his life. He died fighting within the enemy's lines, setting a magnificent example to all who were privileged to serve under him."
INSCRIPTION
​"WHEN MY SPIRIT ENTERS TO ITS REST MY LIPS SHALL SAY "I TOO HAVE KNOWN THE BEST" 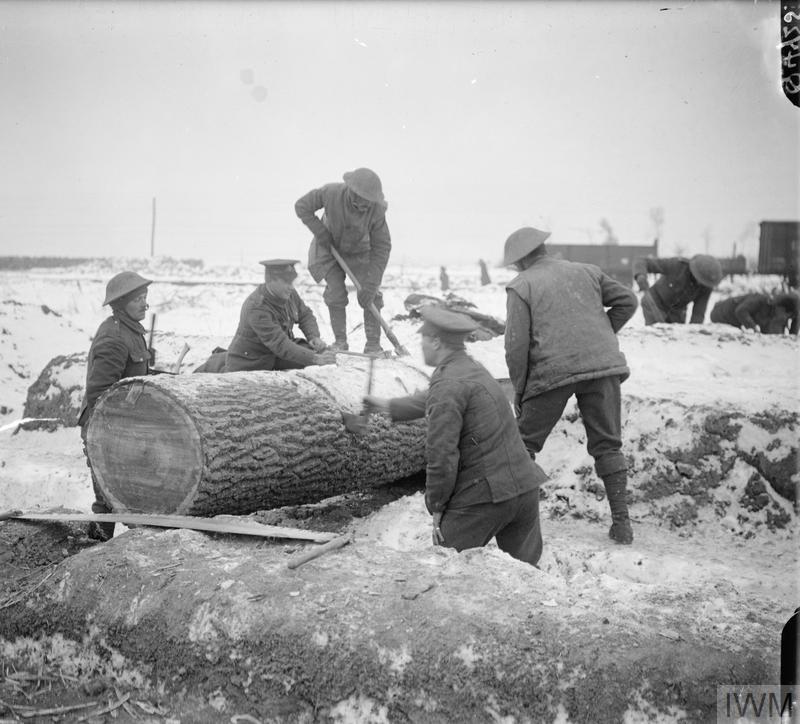 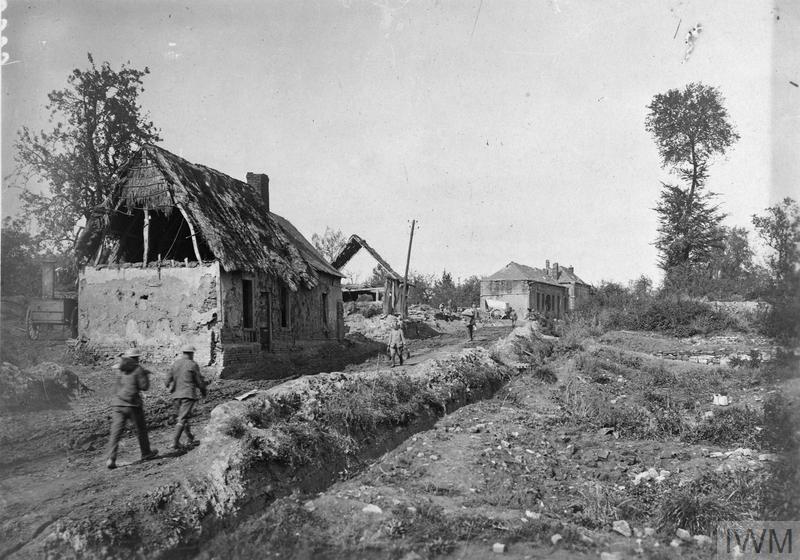 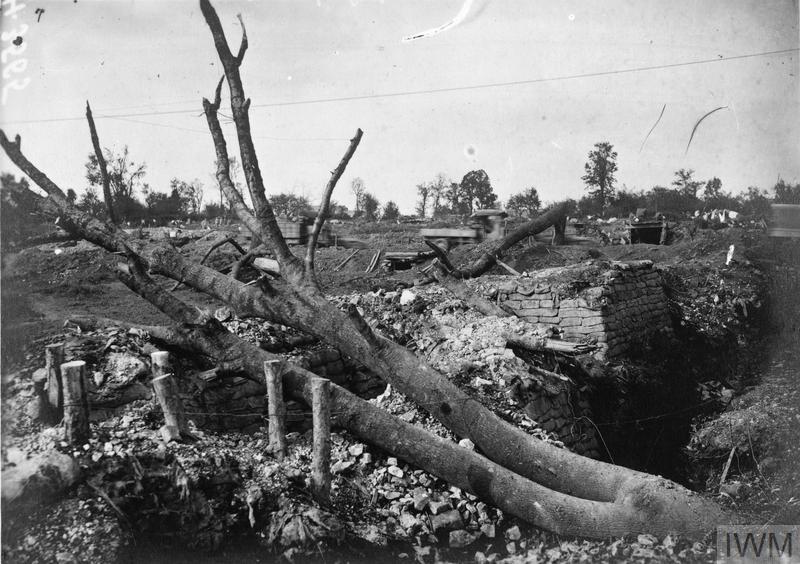 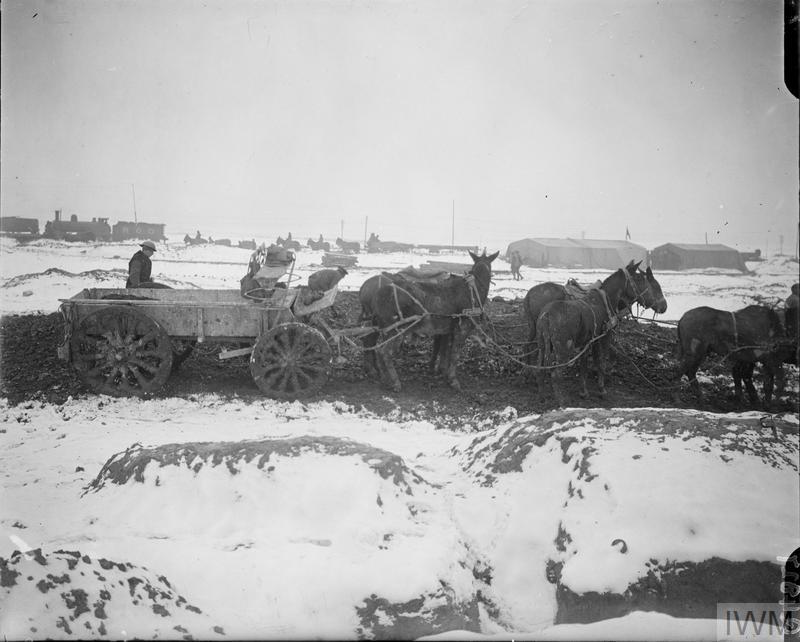 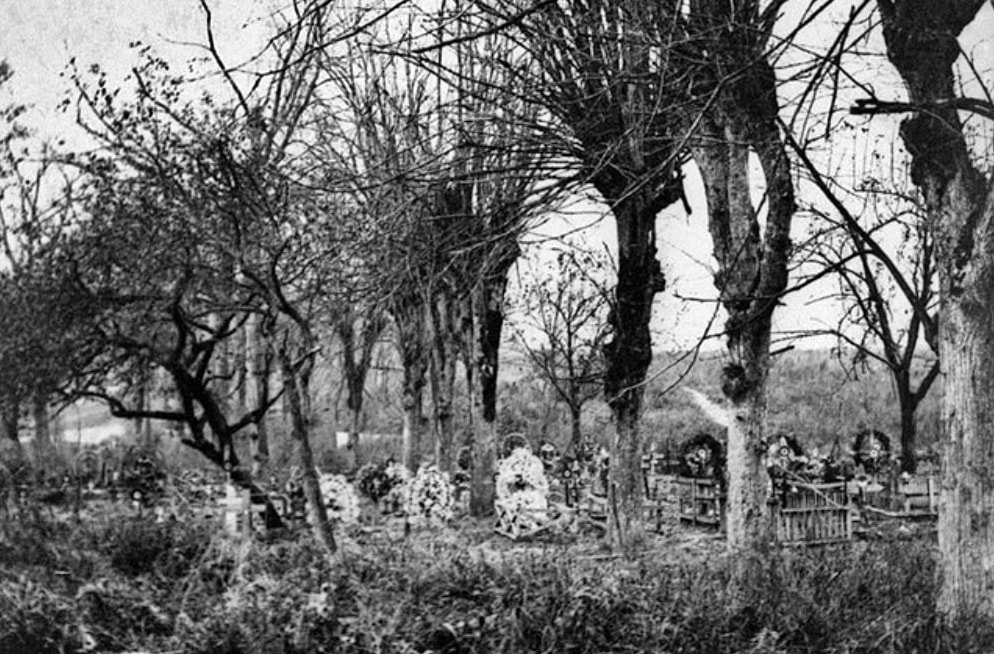 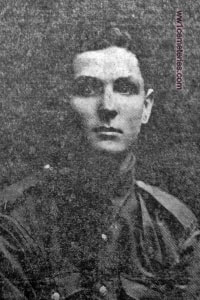 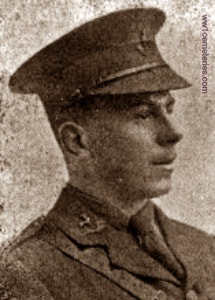 Son of Harry Brinkworth, of Reading.

His headstone bears the inscription; "He Fought The Good Fight." 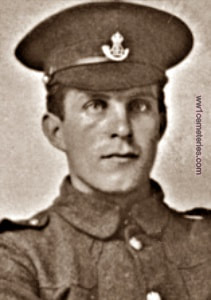 Son of Joseph and Sarah Cobain. Born in Co. Tyrone. 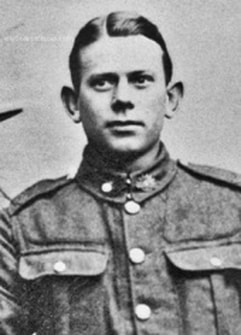 His headstone bears the inscription; "He Giveth His Beloved Sleep."
​
A carpenter from Brompton, South Australia, prior to enlistment, he embarked as an Acting Sergeant with the 6th Reinforcements from Adelaide on 11 April 1916 aboard HMAT Aeneas for Suez. The battalion relocated to the Western Front, France, during June 1916. In mid-October 1916 he was promoted to the substantive rank of Sergeant (Sgt) and in late October he was hospitalised with rheumatism and myalgia for four months before rejoining his battalion near Albert, France. Sgt Dimmick died of heart failure while on unit training near Bapaume, France, on 25 April 1917. 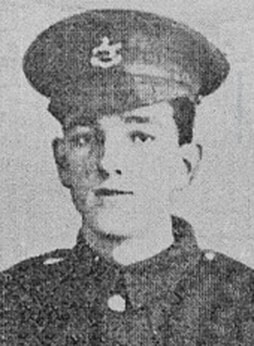 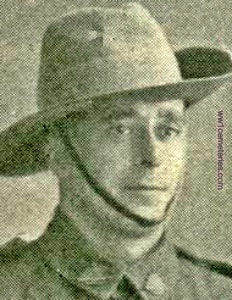 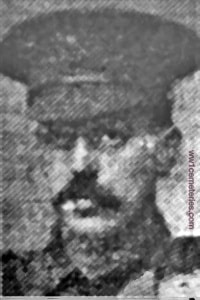 His headstone bears the inscription; "Ever In Our Thoughts." 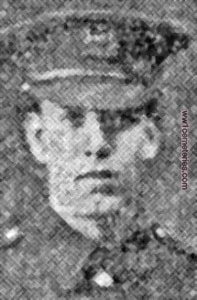 His headstone bears the inscription; "The Supreme Sacrifice." 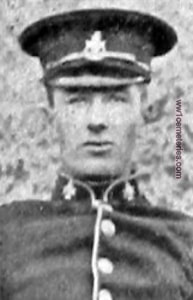 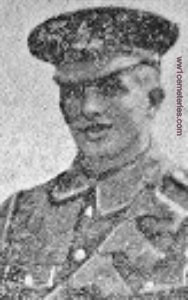 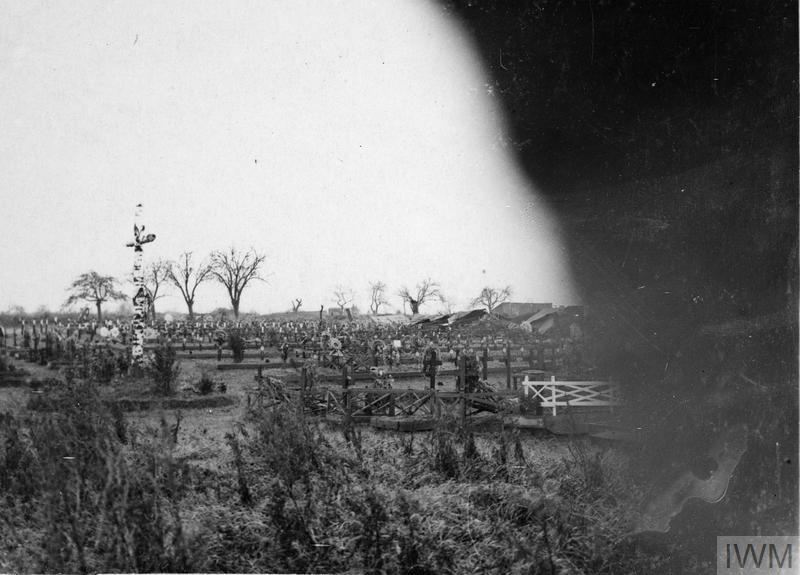 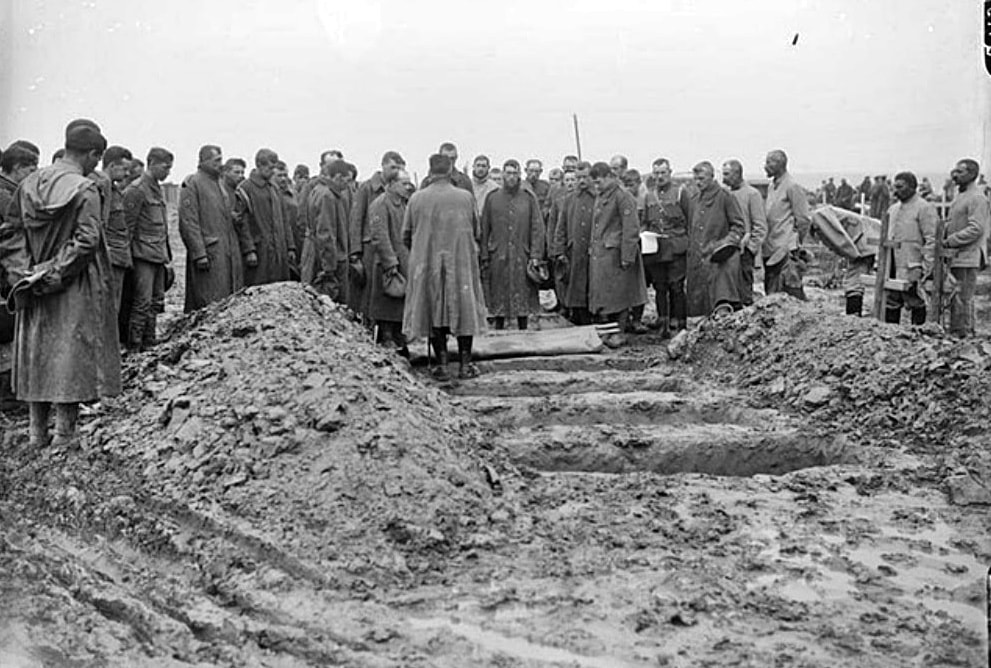 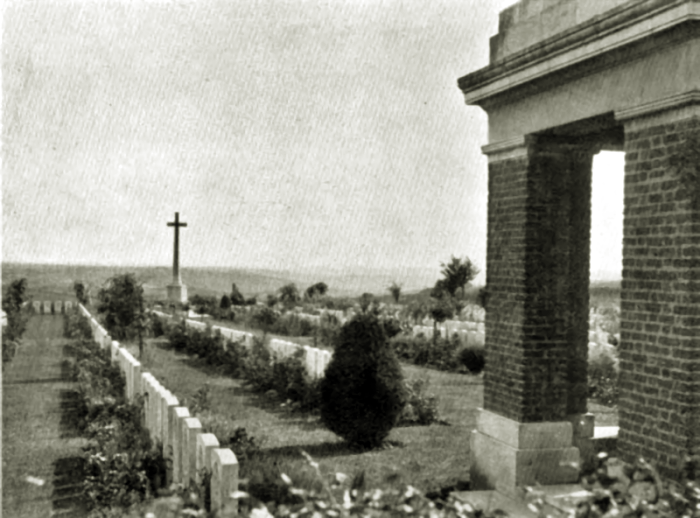