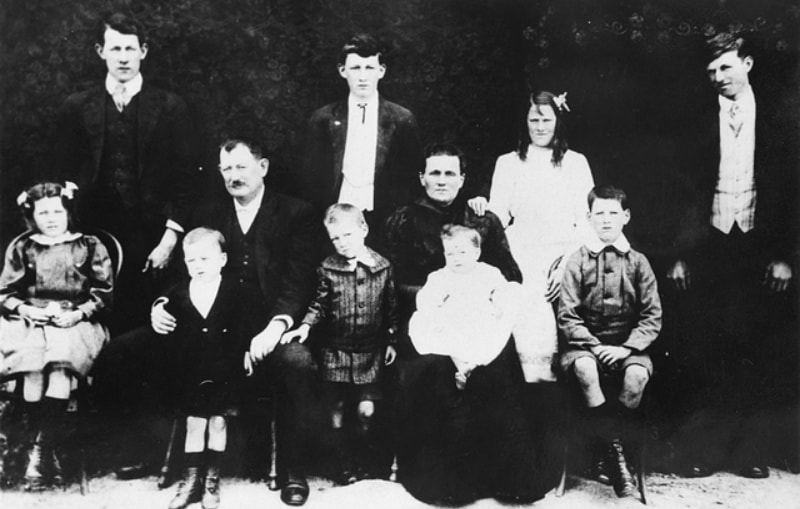 Group portrait of members of the Hill family of Germantown (later renamed Holbrook), NSW. Back row, standing, left to right: Otto Gordon; Harry ; Lena and George. Front row, seated: Elizabeth; Mr Hill; John Roger (Jack); Mrs Hill (nursing Keith); and Emil. Tom is standing in front of Mr Hill. Otto and George Hill both enlisted in the AIF in the First World War. 37 Private (Pte) Otto Hill embarked with A Company, 13th Battalion, from Melbourne aboard HMAT Ulysses on 22 December 1914. He was killed in action at Gallipoli on 3 May 1915. 6523 Pte George Hill embarked with the 21st Reinforcements, 2nd Battalion, from Sydney aboard HMAT Ceramic on 7 October 1916. He was wounded in action in France and returned to Australia on 27 September 1917. John Hill served in the Second World War. NX49021 Pte John Hill enlisted in 2/20 Battalion on 10 October 1941. Whilst in Singapore he transferred to 2/19 Battalion and was taken prisoner of war (POW) of the Japanese. Pte Hill was in a group of prisoners moved to Japan in December 1943 where died of illness on 20 July 1945. 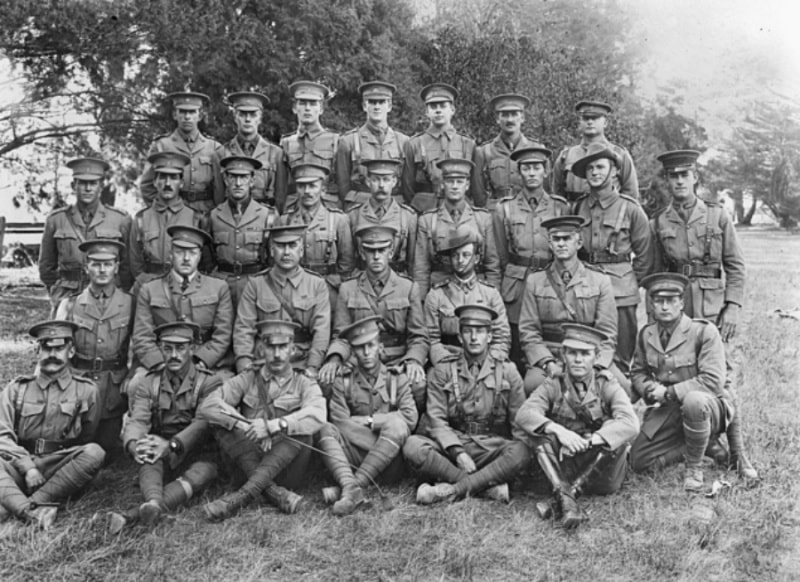 Group portrait of officers of the 15th Battalion prior to embarkation overseas. Captain (later Major) Quinn [of Quinn's Post, Gallipoli], is second from right, third row. 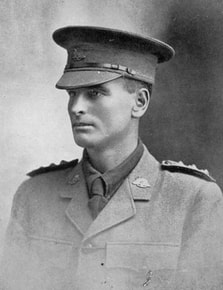 Son of Alexander and Elizabeth Hoggart; husband of Mrs. R. J. Hoggart, of 35, Domain Rd. East, South Yarra, Victoria. Of Buangor, Victoria.
​
Studio portrait of Captain William Ross Hoggart, 14th Battalion of Brighton, Victoria. A schoolmaster prior to enlisting, he embarked from Melbourne aboard HMAT Ulysses (A38) on 22 December 1914. On 27 April 1915, he was killed in action, at Quinn’s Post, Gallipoli, Turkey, aged 38, 2 days after landing at Gallipoli. He is buried in the Quinn's Post Cemetery, Gallipoli, Turkey. 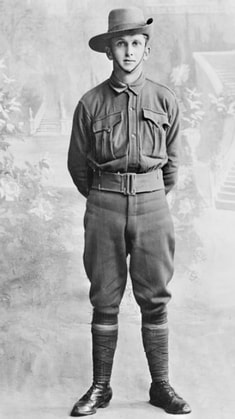 Inscription " To Live In Hearts We Live Behind, Is Not To Die Our Dear Boy At Rest" 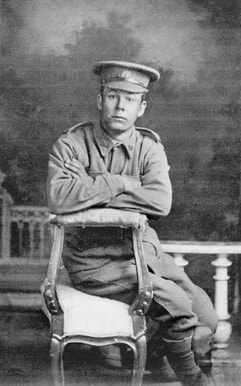 Studio portrait of 264 Private Archibald Joseph Keens, 1st Battalion. A carriage fitter of Lewisham, he embarked on HMAT Afric (A19) on 18 October 1914. He was killed in action on 1 May 1915 on the Gallipoli peninsula. Two brothers also served: 1236 Private David Keens, 4th Battalion was killed in action on 22 July 1916 at Pozieres, France, and is commemorated on the Villers-Bretonneux Memorial and  6824 Private Charles Henry Keens, 17th Battalion returned to Australia on 31 March 1919. 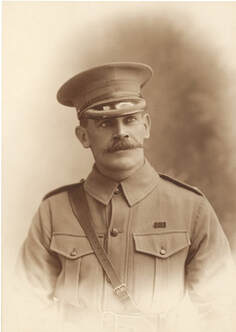 Studio portrait of Major Thomas James Logan, 2nd Australian Light Horse Regiment, of Forest Hill, Qld, who was killed in action on 7 August 1915. He is wearing the ribbon of the Queen's South Africa medal; during the South African (Boer) War he served as a private with the 1st Queensland Mounted Contingent. 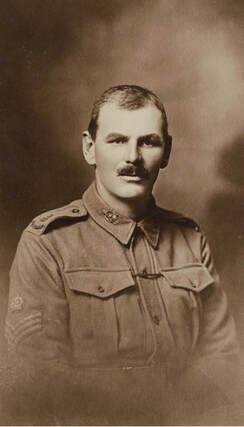 Portrait of 1481 Company Sergeant Major Donald Neil MacGregor, 3rd Battalion, AIF, who was killed in action at the landing at Anzac Cove, Gallipoli on 25 April 1915. (Donor Base Records, Melbourne) 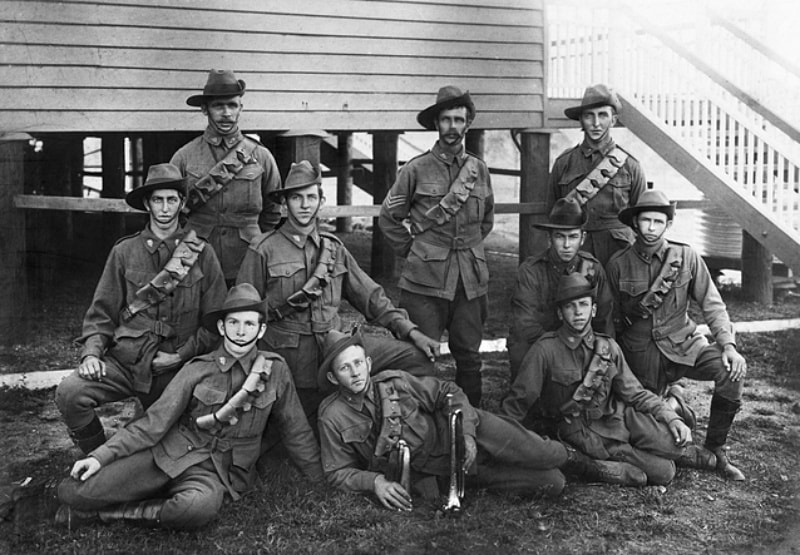 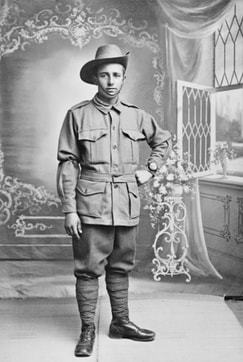 Inscription "Son of Mr. & Mrs. A. McDonald, Of Fryerstoun, Victoria" 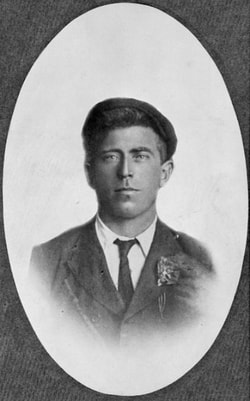 Pre-war studio portrait of 1395 Private (Pte) Robert Reubenicht, 15th Battalion, of Birkinhead, SA. A seaman before enlisting in November 1914, Pte Reubenicht left Australia for Egypt with H Company in December 1914. Having taken part in the landing on Gallipoli on 25 April 1915, Pte Reubenicht was killed at Pope's Hill on 1 May 1915, aged 24. 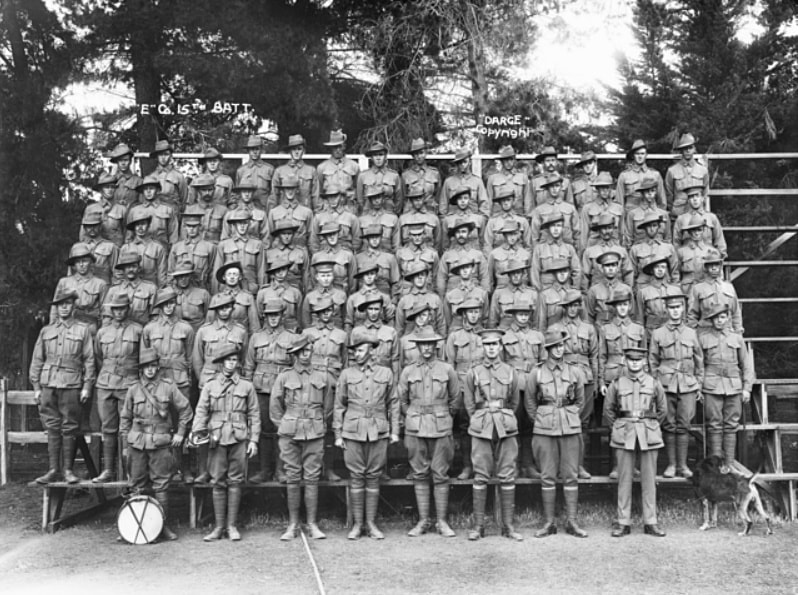 Identified back row, left to right: