St. Mary's A. D. S. cemetery is located in the vicinity of Haisnes, which lies between the towns of Lens and La Bassee in the Pas-de-Calais. Although the Cemetery lies in open farmland, there are neighbouring towns of Vermelles, Loos-en-Gohelle and Hulluch.

The Cemetery can be reached from the D947, Lens to La Bassee road, and a CWGC signpost is visible on this road. The Cemetery is on the D39, Hulluch to Vermelles road.

The village was reached, or nearly reached, by the 9th (Scottish) and 7th Divisions on the 25th September 1915, the first day of the Battle of Loos; and parts of the commune were the scene of desperate fighting in the Actions of the Hohenzollern Redoubt (13th-15th October, 1915). No further advance was made in this sector until October 1918, when the enemy withdrew his line.

"St. Mary's Advanced Dressing Station" was established, during the Battle of Loos, and the cemetery named from it is at the same place. The cemetery was made after the Armistice, by the concentration of graves from the battlefield of Loos; the great majority of the graves are those of men who fell in September and October 1915.

The only defined burial ground from which graves were brought to this cemetery was:-

LOOS COMMUNAL CEMETERY, on the South-West side of the town, in which nine soldiers from the United Kingdom were buried in February 1916, and which was subsequently ruined by artillery fire.

There are now nearly 2,000, 1914-18 war casualties commemorated in this cemetery. Of these, over two-thirds are unidentified and Special Memorials are erected to 23 soldiers from the United Kingdom, known or believed to be buried among them. Six other special memorials record the names of soldiers from the United Kingdom, buried in Loos Communal Cemetery, whose graves were destroyed by shell fire.

The cemetery covers an area of 6,097 square metres and is enclosed by a low rubble wall.

There was at one time a French cemetery of 800 graves on the opposite side of the road; but in 1922 these graves were removed to Notre Dame-de-Lorette French National Cemetery. 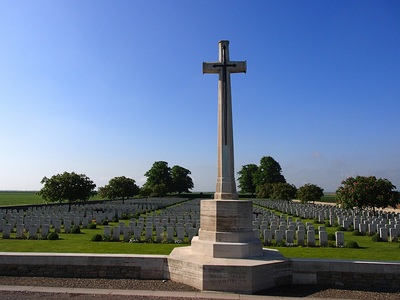 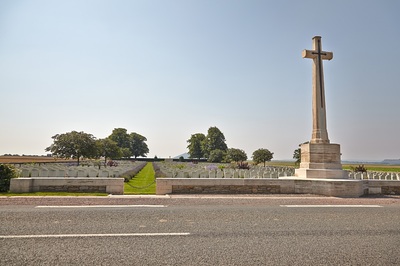 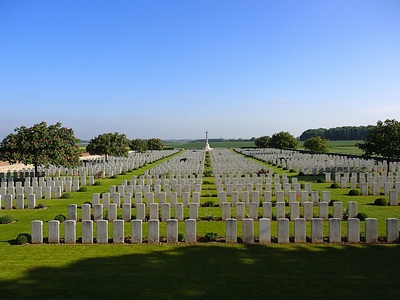 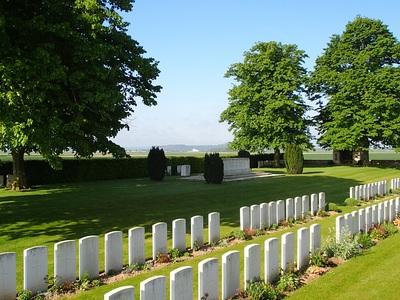 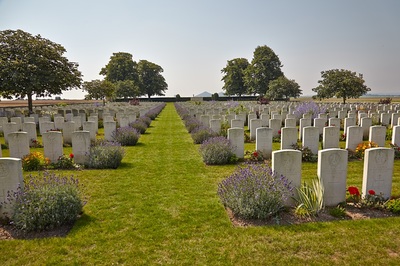 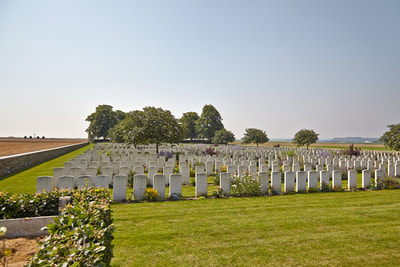 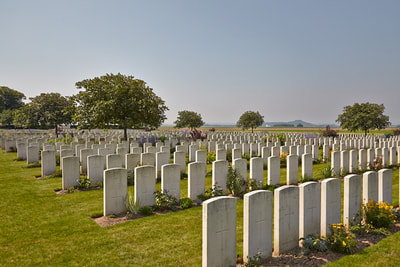 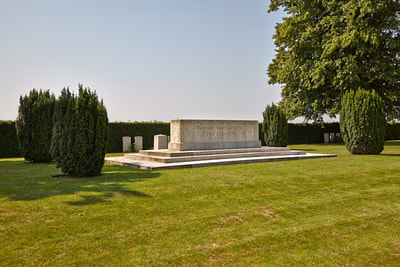 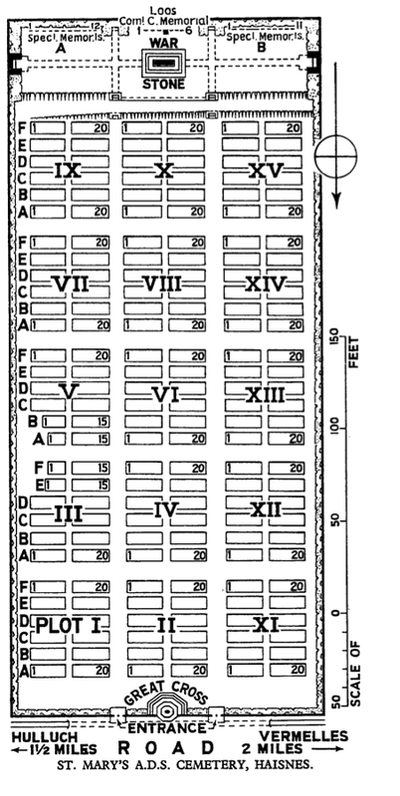 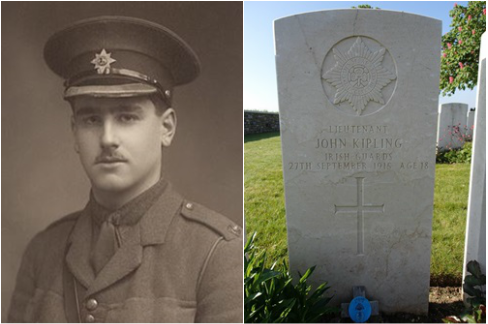 John "Jack" Kipling (17 August 1897 - 27 September 1915) was the only son of the British author Rudyard Kipling. He was killed at the Battle of Loos while serving with the British Army during the First World War, a few weeks after his eighteenth birthday.
​
He is a central character in the 1997 play My Boy Jack and its 2007 film adaptation.

Born in 1897, Kipling was the youngest of three children of the author Rudyard Kipling and his American wife Caroline Starr Balestier. He was born at "The Elms" at Rottingdean in Sussex, which was the Kiplings' home between 1897 and 1902. He was educated at Wellington College, Berkshire.

Kipling was 16 when war broke out in August 1914. His father was a keen imperialist patriot who was soon writing propaganda on behalf of the British government. He sought to get his son John a Commission but John Kipling was rejected by the Royal Navy due to severe short-sightedness. He was also initially rejected from the British Army for similar reasons. However, his father was friends with Frederick Roberts, 1st Earl Roberts, commander of the British Army, and Colonel of the Irish Guards, and through this influence, Kipling was commissioned as a Second Lieutenant in the 2nd Battalion of the Irish Guards having just turned 17 in August 1914. After reports of the Rape of Belgium and the sinking of the RMS Lusitania in 1915, Rudyard Kipling came to see the war as a crusade for civilization against barbarism and was even more keen that his son should see active service.

After completing his training, John Kipling was sent to France in August 1915 (his father was already there on a visit, serving as a war correspondent).

The casualty rate amongst junior officers in the trenches was extremely high, much higher than NCOs or other ranks - on average, a junior officer leading from the front survived six weeks before becoming a casualty (killed or injured).

Kipling was reported injured and missing in action in September 1915 during the Battle of Loos. A shell blast had apparently ripped off his face. With fighting continuing, his body was not identified.

His parents searched vainly for him in field hospitals and interviewed comrades to try to identify what had happened. A notice was published in The Times on 7 October 1915 confirming the known facts were that he was "wounded and missing".
​
The death of John inspired Rudyard Kipling to become involved with the Commonwealth War Graves Commission and write a wartime history of the Irish Guards. The poem My Boy Jack also alludes to the wartime loss of a son, although its themes are rather nautical.

The Grave of Kipling was reportedly identified in 1992, and he is officially listed as buried in St Mary's ADS Cemetery in Haisnes  However, other research suggests that this grave may be of another officer, that of Arthur Jacob of the London Irish Rifles. The first biography of Kipling including this research and was published by military historians Tonie and Valmai Holt to coincide with the film.
(Source: Wikipedia) 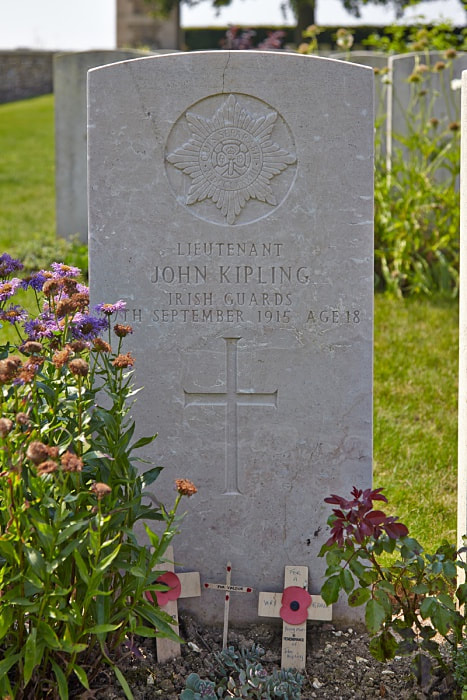