Ste. Marie Cemetery is one of the town cemeteries, but it is actually situated in the commune of Graville-St. Honorine, overlooking Le Havre from the north. The main entrance to the cemetery is on the Rue du 329ème Régiment d'Infanterie. There is another entrance on the west side of the cemetery which is closest to the main war graves plots and this can be accessed via the Rue Eugène Landoas.

Please note that the sketch plan of the cemetery that can be downloaded from the Commissions website was drawn up many years ago as a guide to the layout of the plots within it. The road names and numbers shown on the plan are therefore no longer representative of today.

Wheelchair access to this cemetery is possible with some difficulty.
OPENING HOURS :

During the First World War, Le Havre was one of the ports at which the British Expeditionary Force disembarked in August 1914. Except for a short interval during the German advance in 1914, it remained No.1 Base throughout the war and by the end of May 1917, it contained three general and two stationary hospitals, and four convalescent depots.

A memorial in Plot 62 marks the graves of 24 casualties from the hospital ship 'Salta' and her patrol boat, sunk by a mine on 10 April 1917. The memorial also commemorates by name the soldiers, nurses and merchant seamen lost from the 'Salta' whose bodies were not recovered, and those lost in the sinking of the hospital ship 'Galeka' (mined on 28 October 1916) and the transport ship 'Normandy' (torpedoed on 25 January 1918), whose graves are not known.

There are now 1,690 Commonwealth burials of the First World War in this cemetery, 8 of which are unidentified.

During the Second World War, Le Havre was one of the evacuation ports for the British Expeditionary force in 1940 and towards the end of the war it was used as a supply and reinforcement base.

There are now 364 burials of the Second World War here,(59 of them unidentified) in Divisions 64 and 67 of the cemetery.

The Commonwealth plots in the cemetery were designed by Sir Reginald Blomfield.

253617 Gunner Frank O. Wills, X50th Trench Mortar Battery, Royal Field Artillery, executed for murder 27th May 1919, aged 20.  Division 64. 6. F. 5. He went missing from his unit after the Armistice, & was accosted by the Military Police in Paris in March 1919.  However Wickings made his escape, using his revolver to shoot dead an NCO & to wound another — only to be detained by a crowd of Parisians. (Putkowski,p.265) 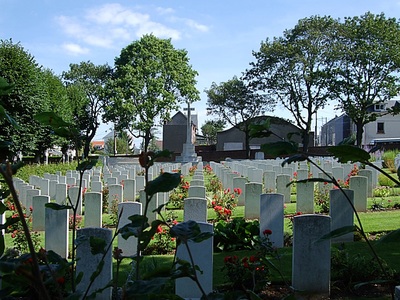 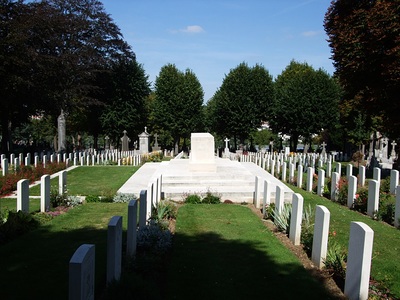 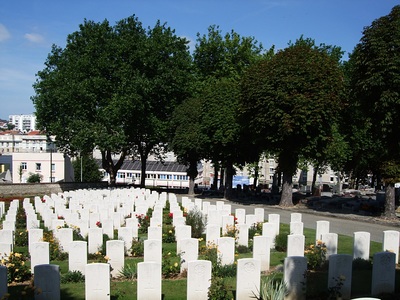 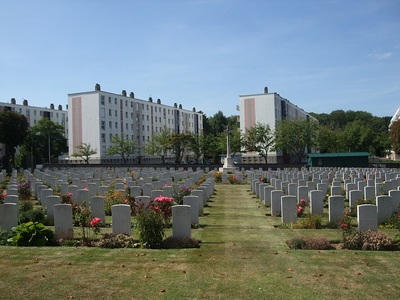 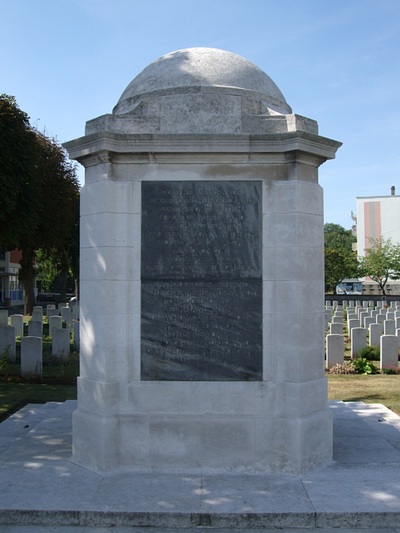 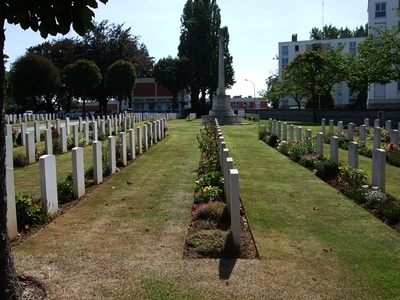 Son of Richard and Annie Waring, of Welshpool, Mont.

Citation: An extract from the "London Gazette," dated 31st Jan., 1919, records the following:- "He led an attack against enemy machine guns and, in face of devastating fire from the flank and front, rushed a strong point single handed, bayoneting four of the garrison and capturing twenty others with their guns; then under heavy shell and machine gun fire, he re-organized his men, led and inspired them for another 400 yards, when he fell mortally wounded." 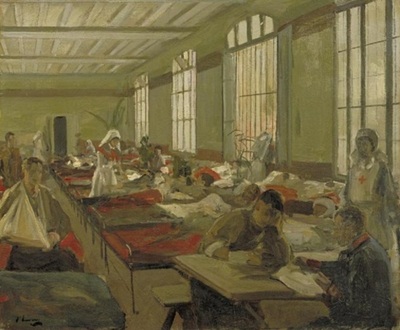 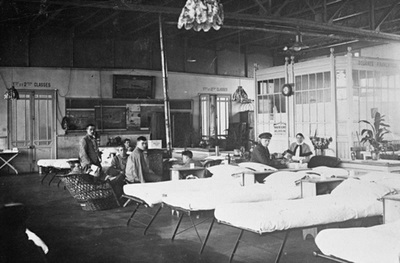 
Biography by Brent Whittam with thanks to Burnley in the Great War.

Allan Crabtree died of Broncho-Pneumonia at at No.2 General Hospital in Le Havre, France on 17th October 1918. Burnley born Allan was the only son of Barker and Elizabeth Ellen Crabtree, his father, a native of Todmorden was a dental mechanic who made and adapted artificial teeth. Allan followed his father into the dental profession and upon enlisting for the army he was shown as an unregistered dental mechanic.

In May 1915 Allan Crabtree married Sarah May Hayhurst, the following year a daughter, Marjorie was born and in 1916 their son, Fred arrived. Allan and May lived at 73 Oxford Road in the same house as his parents, a Baptist he was at one time connected to the Hollingreave Congregational Church. On the 24th August 1916 he was enlisted into the Royal Army Medical Corps, his records show that he was 5ft 4 inches, 108lbs and physically well developed.

Making use of his dental knowledge the army utilised him as a dental mechanic first in Italy and later at the military hospital in Valletta, Malta where as a specialist he was paid an extra 6d per day. he worked at the hospital between March 1917 and June 1918, he then embarked for Italy and landed at Taranto in early August before continuing to France. He spent time at home on leave in Burnley during September 1918 before returning to France on October 2nd. Two weeks later Allan Crabtree would be dead.

It was at Le Havre, France that Allan Crabtree died of Broncho-Pneumonia at No.2 General Hospital on 17th October 1918. He left a widow May and two young children behind in Burnley. The local newspaper reported that "By a host of friends and acquaintances his death will be much regretted".
​
His grave can be found in the Ste. Marie Cemetery at Le Havre, his parents grave in Burnley Cemetery also carries the inscription "Also of their son Pte. Allan Crabtree. R. A. M. C. Died in France, Oct 17th 1918, aged 25 years. 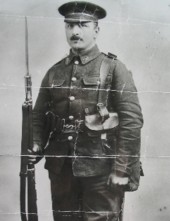 "Remembered with honour" by Anita, Emma and Frederick East 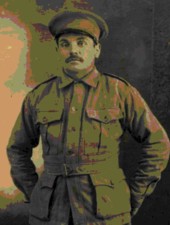 Picture courtesy of the Field family and submitted by Harry Willey

Son of Thomas and Mary Rawcliffe, of Chorley, Lancs. 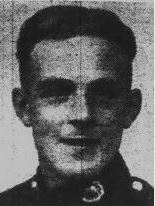 Son of Frank and Ellen Ann Whitaker, of Burnley, Lancashire