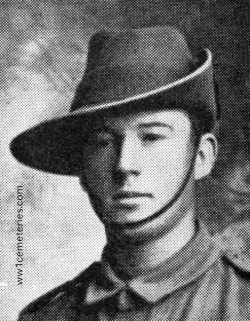 His headstone bears the inscription "Dearly Loved Son Of A. & H. McGlashan Of N. S. W."

Studio portrait of 2418 Private Arthur William McGlashan MM, 17th Battalion of Croydon, NSW. A railway worker prior to enlisting, he embarked from Sydney aboard HMAT Themistocles (A32) on 5 October 1915. He was killed in action near Pozierer, France, on 26 August 1916, aged 20. He is buried in the Sunken Road Cemetery, Contalmaison, France. Pte McGlashan was awarded the Military Medal in the London Gazette of 21 September 1916, for gallant devotion to duty for his action during the period 25 July 1916 and 5 August 1916 when he acted as telephonist and messenger between the front line and battalion HQ. He unhesitatingly repaired the telephone line when it was repeatedly cut by shell fire. When the line failed he carried messages through severe barrages when required.

​His cousin 1359 Pte Frederick McGlashan was killed in action at Gallipoli, Turkey on 22 August 1915 and is commemorated on the Lone Pine Memorial. 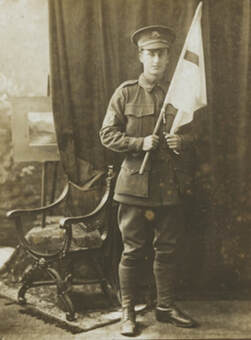 His headstone bears the inscription "Because I Live Ye Shall Live Also" John 14 Chap. 19. V.

Studio portrait of 3318 Private (Pte) Percy Roy Merrick, a railway porter from Kiama, New South Wales, he enlisted with the 19th Battalion on 15 August 1915. Pte Merrick was wounded in action near Pozieres on 26 July 1916 and died from his wounds the next day on 27 July 1916. 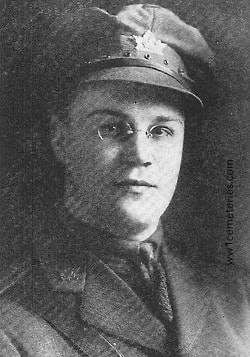 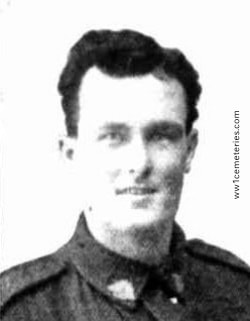 His headstone bears the inscription "Pause, Oh You Winds Of France As Around His Grave You Moan & Whisper" 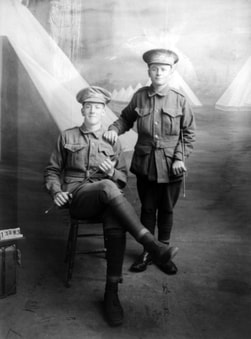 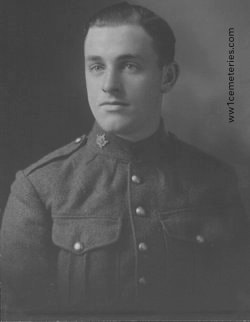 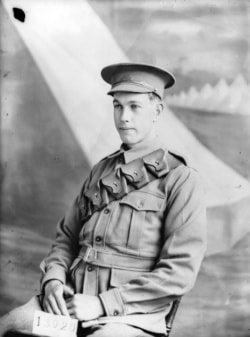 Studio portrait of 4311 Private (Pte) John Stark. Originally from Carlisle, England, Pte Stark was a railway employee from Cranbourne, Victoria and had previously been rejected due to bad teeth. He later embarked with the 13th Reinforcements, 5th Battalion from Melbourne on HMAT Demosthenes on 29 December 1915. On 18 August1916, aged 21, he was killed in action and buried in the Sunken Road Cemetery, Contalmaison, Picardie, France.​ 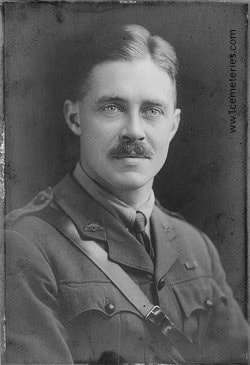 On the left is an image of 4549 Sergeant George Alexander Tuffley, 25th Bn. Australian Infantry, A.I.F. who was killed in action on 29th August 1916, aged 21. Plot I. B. 1. Son of Joseph and Louisa Fielding Tuffley, of State School, Townsville North, Queensland. Native of Warwick, Queensland. His headstone bears the inscription "Thy Will Be Done"

On the right above is an image of Sergeant (Sgt) George Alexander Tuffley and his mates, all of the 25th Battalion.

Identified left to right, back row:

Tuffley has inscribed the verso: 'The uniform is of the same material as our old school cadet uniforms. I don't like the helmet. They are too clumsy. Nearly all our chaps wore shorts in Egypt. Lahey was on the Peninsula. Notice that the uniforms are not very good fits. Alex 26/6/16. These are my mates.' 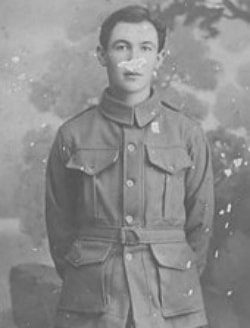 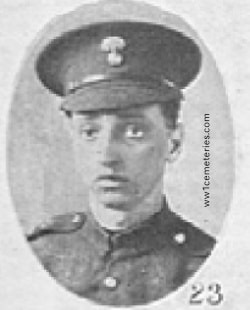