I have the “large bronze” penny sent to the next of kin for, Private 9180 Ernest Cable, 2nd Bn. East Surry Regiment who died 13th March 1915 in the Wimereux hospital. He was a friend of our family and lived before joining the army with my grandmother. He had no relatives which I guess that was why she received the penny. I was not born till 1939 but the story was known within the family. He is in grave I.D. 27.
​
Information provided by Mike Norman 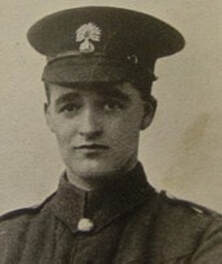 Son of Herbert B. Barkham, of Croydon, Surrey. 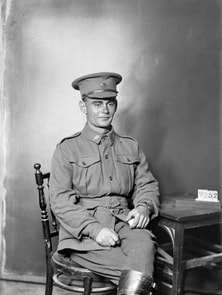 Inscription "May his Soul Rest In Peace"

Studio portrait probably of 2562 Pte William Bernard Beirne, 8th Reinforcements, 6th Battalion, of Wandong, Vic. Pte Beirne enlisted on 31 May 1915 and embarked from Melbourne aboard HMAT Anchises on 26 August 1915. He died of wounds he received at Pozieres, France, on 25 July 1916. 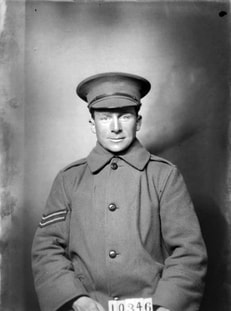 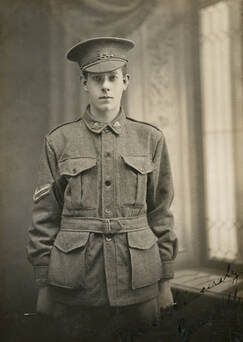 Inscription "Could I Have Kissed His Brow When Death War Near"

Portrait of 2895 Acting Corporal (Cpl) Granville Bennett, 31st Battalion, of North Sydney, NSW. A warehouseman prior to enlistment Pte Bennett embarked with the 5th Reinforcements from Melbourne on HMAT Anchises on 14 March 1916. After being appointed Acting Sergeant (Sgt) he reverted to the rank of Private (Pte) after transferring to the 8th Machine Gun Company and, on 16 October 1917, died of wounds received in action at Passchendaele. 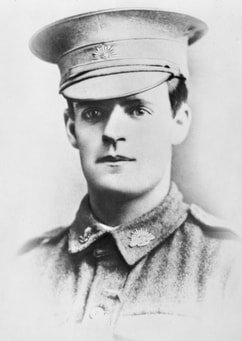 Studio portrait of 2787 Private (Pte) John Henry Bishop, 6th Battalion, of Brunswick, Vic. A labourer prior to enlistment, Pte Bishop embarked with the 9th reinforcements from Melbourne on HMAT Star of Victoria on 10th September 1915. After initially transferring to the 58th Battalion, he was later posted to the 60th Battalion with the service number of 2787A and, on 25th July 1916, he died of wounds received in action and was buried at Wimereux Cemetery, Boulogne, France. 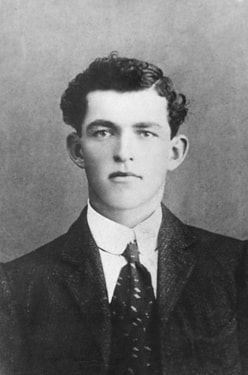 Inscription "Sunshine And Shadows Pass But Loving Memories For Ever Last"

Pre enlistment studio portrait of 1623 Private (Pte) Joseph Michael Brown, 54th Battalion, of Beechworth Vic. A labourer prior to enlistment, Pte Brown embarked with the 2nd Reinforcements from Sydney on HMAT Ceramic on 14th April 1916. On 25th May 1917 he died of wounds received in action and was buried in the Wimereux Communal Cemetery, France. 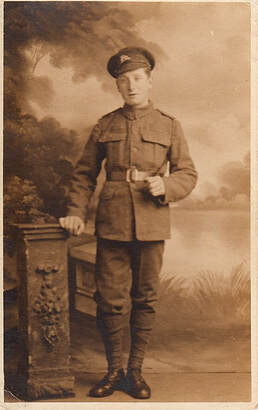 Son of the late Mr. and Mrs. Cook, of Shadwell, London; husband of Florence Edith Cook, of 27, Gedling St., Bermondsey, London. Married 6 months before he was killed. 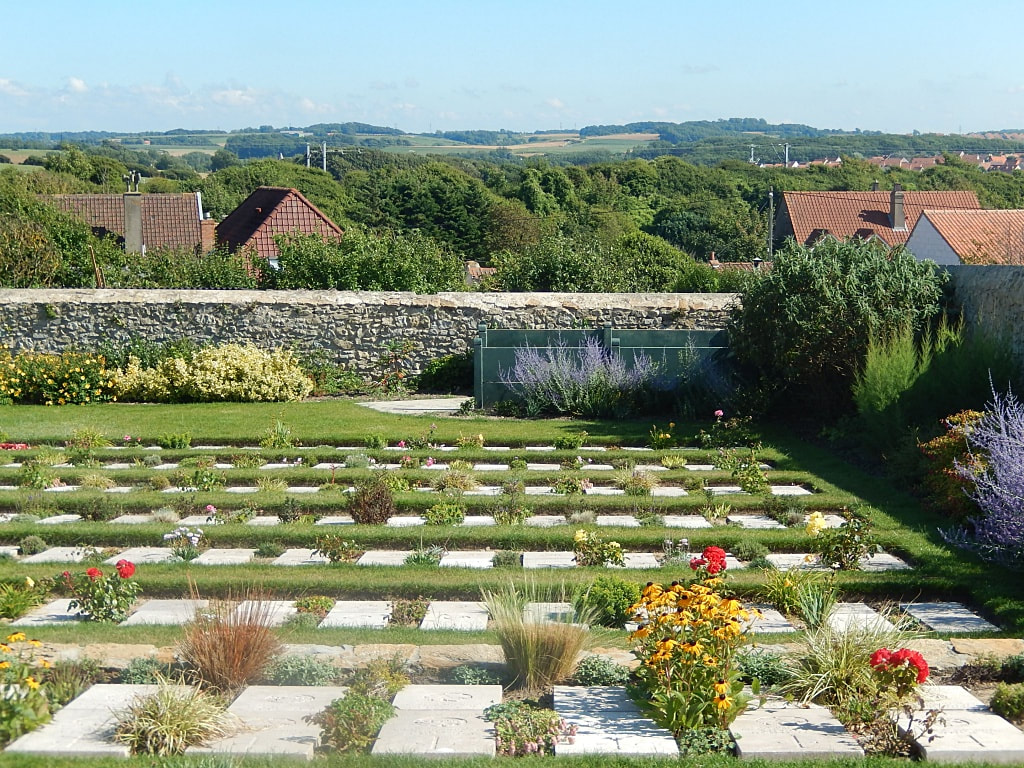 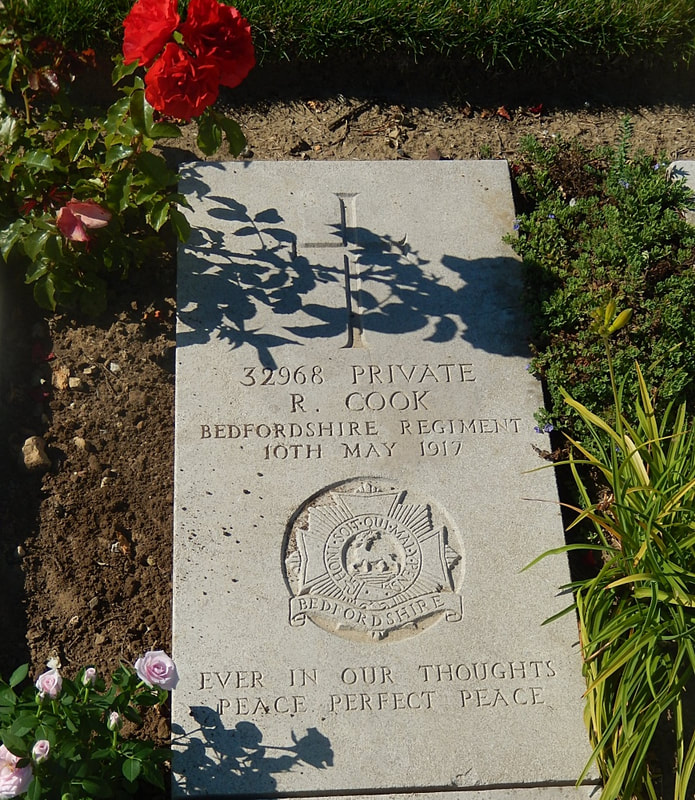 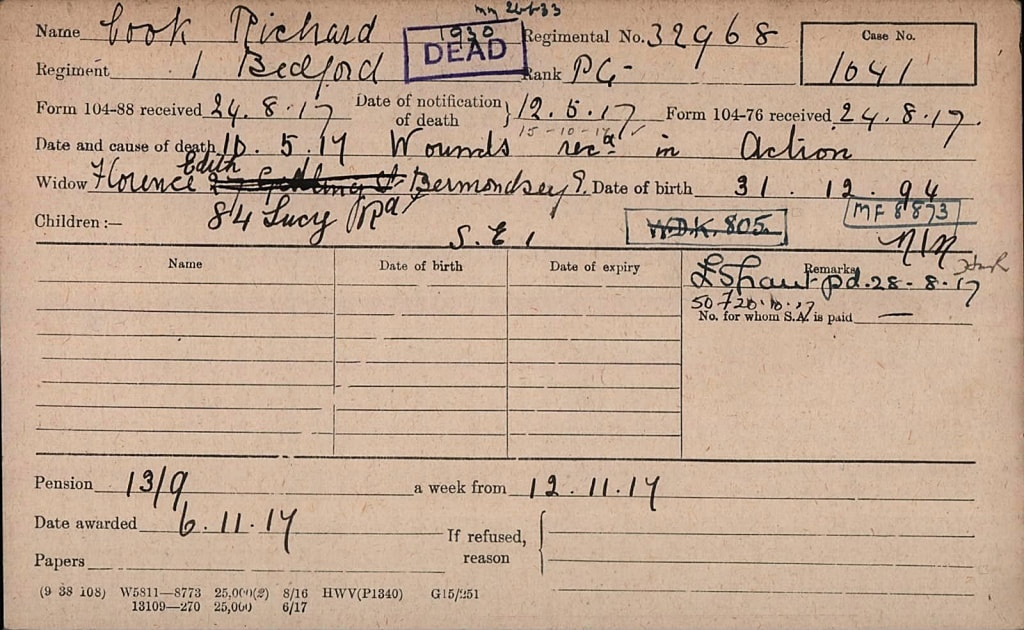 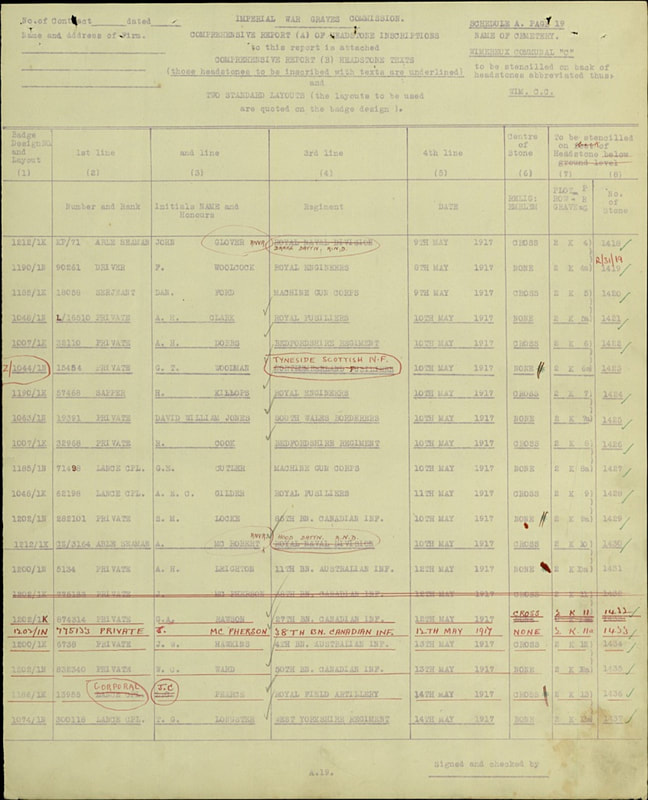 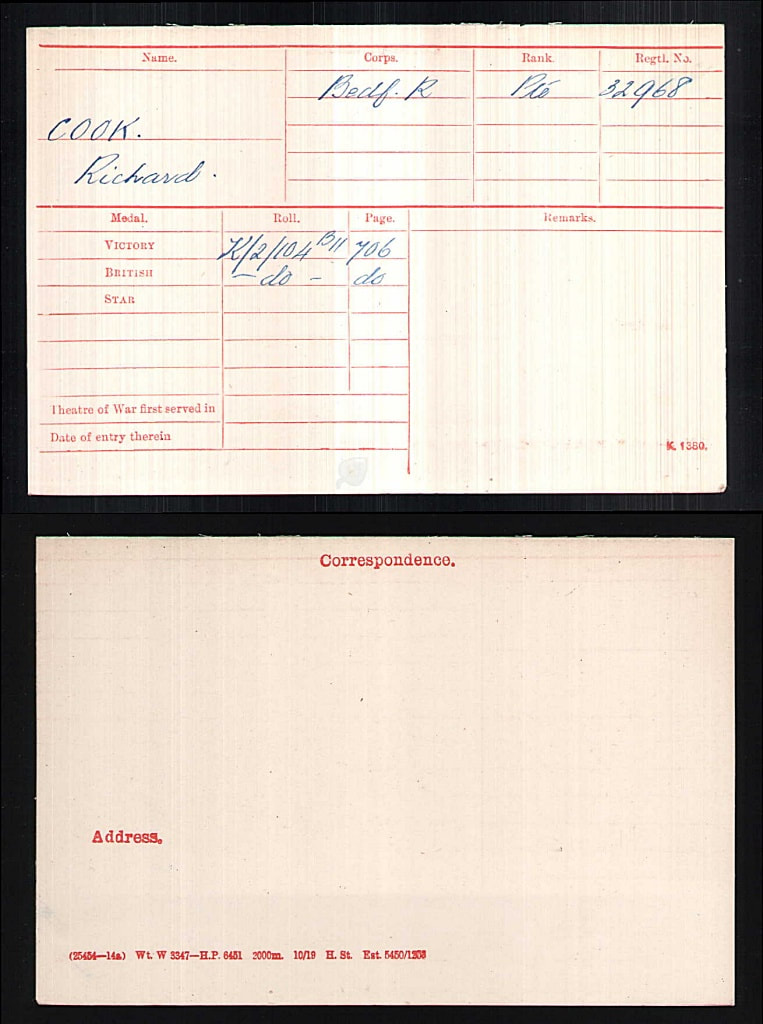 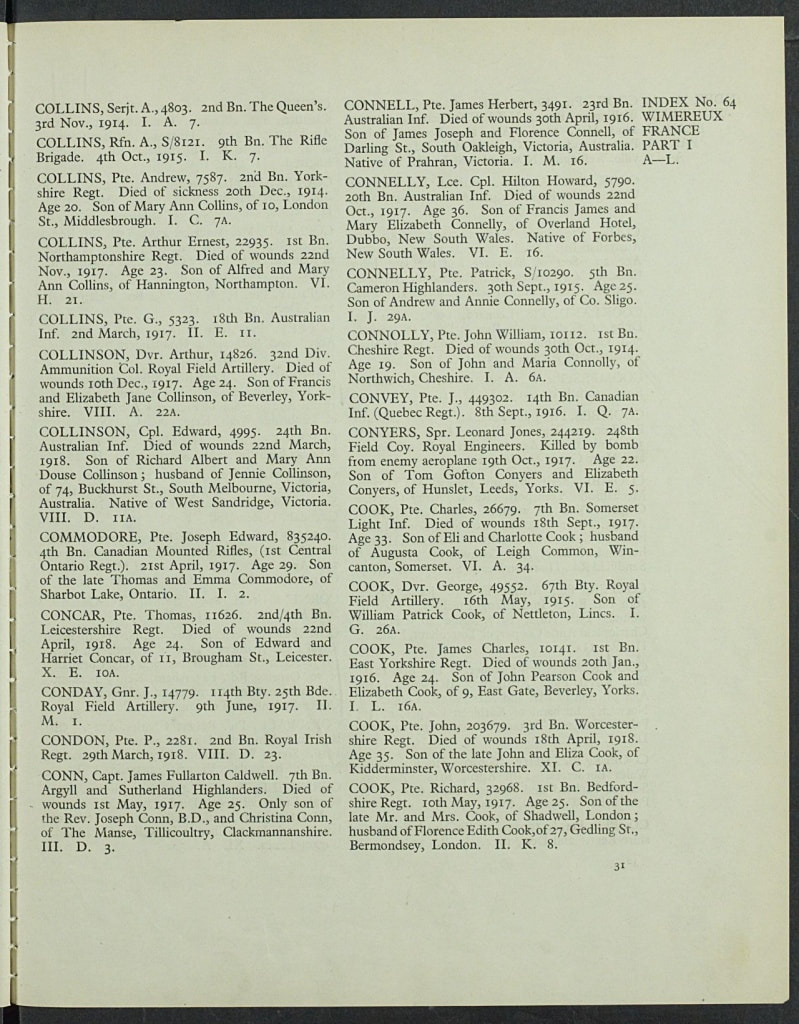 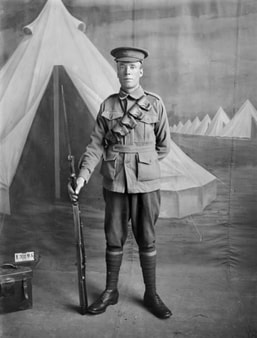 Inscription "Beloved By All Who New Him So Sadly Missed"

Studio portrait of 3503 Private (Pte) George Young Davis, 23rd Battalion. A house painter from Oakleigh, Vic prior to enlistment, Pte Davis embarked with the 8th Reinforcements from Melbourne aboard HMAT Afric on 5 January 1916. Later transferring to the 59th Battalion, on 25 July 1916 he died, aged 36, at the 8th Stationary Hospital, Boulogne, France from wounds received in action at Fromelles 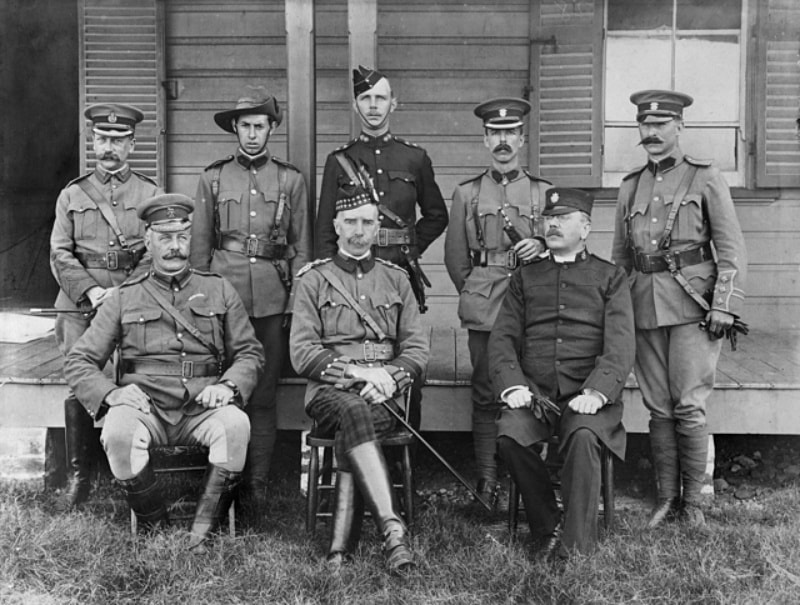 A group photograph relating to the service of Lieutenant Colonel (Lt Col) James Froude Flashman of the 1st Australian Hospital, Australian Army Medical Corps during the First World War. He died of disease on 12 February 1917 at the age of 46 (back row standing) 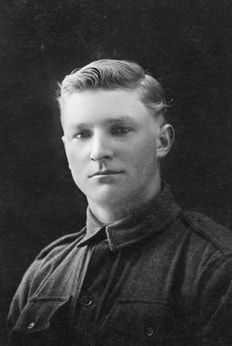 Inscription "The Lord Gave & The Lord Has Taken"

Studio portrait of 3652 Private (Pte) Gustav Alfred Gerhardy, 32nd Battalion. Gustav and his older brother 3556 Pte Johannes Arthur Gerhardy, both farmers from Black Hill, South Australia, prior to enlistment, embarked from Adelaide with the 8th Reinforcements aboard HMAT Ballarat on 12 August 1916 for Devonport, England. They received training in England then proceeded to France where they attended wireless training at Campagne-les-Hesdin before joining their battalion on the Western Front near Bapaume, France. Pte Gustav Gerhardy was wounded in action near Dickebusch, Belgium, on 1 October 1917 and was evacuated to No 2 Australian General Hospital, Wimereux, France, where he died of these wounds on 14 October 1917. He was aged 23 years. Pte Johannes Gerhardy continued to serve with the 32nd Battalion until 7 February 1918 when he was detached to the Assistant Provost Marshal, 5th Australian Division. He was wounded in action as the result of a gas attack and was evacuated to England for treatment and recuperation. Pte Johannes Gerhardy continued to serve with the Provost Corps in England and in France until he returned to Australia for discharge in July 1920. 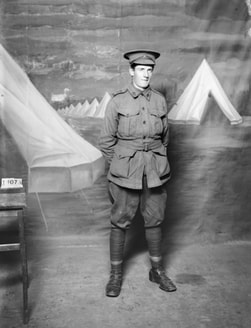 Studio portrait of 4796 Private Walter Nicholas Goss, 12th Battalion, of Eastwood, Tasmania. A milkman prior to enlistment, he embarked with the 15th Reinforcements on HMAT Ballarat on 19 February 1916. He transferred to several artillery units before becoming a driver with the 10th Field Artillery Brigade. He received a shot wound to the back on 5 April 1918 and died of these wounds on 18 April 1918. 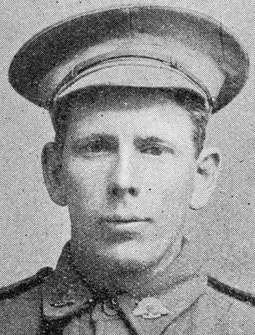 Studio portrait of 3758 Private Basil Benjamin James Hunter, 1st Battalion (later 1st Pioneer Battalion) of Cecil Park via Liverpool, NSW. A fitter prior to enlisting, he embarked from Sydney aboard RMS Mooltan on 11 December 1915. He died on 1 October 1916, in the No. 8 Stationary Hospital, Wimereux, France, of self inflicted wounds, aged 27. 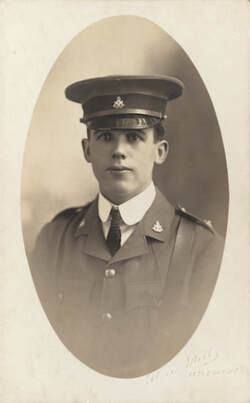 
Studio portrait of 19803 Gunner (Gnr) Samuel Joseph Jones, 8th Field Artillery Brigade (FAB). Gnr Jones, a clerk from Fitzroy, Victoria, enlisted on 4 November 1915 and embarked from Sydney aboard HMAT Medic (A7) on 20 May 1916. He served in France where he was wounded and then sent to England to recover. He then returned to the Western Front where he was again wounded and died on 25 October 1917. Gnr Jones was buried in the Wimereux Communal Cemetery, France. Gnr Jones is shown in his pre-war uniform uniform of a Second Lieutenant in the 60th Battalion Citizens Forces (Brunswick-Carlton). The unit's unique badge is worn prominently on his collar and cap. 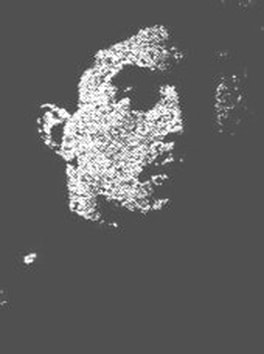