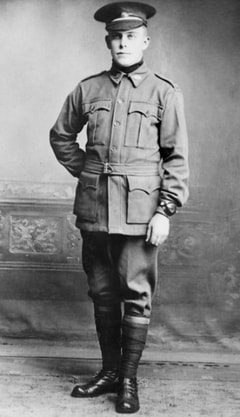 Inscription "Near My God To Thee"

Studio portrait of 3265 Private (Pte) William Herbert Tilley, 23rd Battalion from Ivanhoe, Victoria. A 22 year old factory hand prior to enlisting on 21 July 1915, he embarked for overseas with the 7th Reinforcements from Melbourne on 26 November 1915 aboard HMAT Commonwealth. After further training in Egypt where he was transferred to the 58th and the 59th Battalions, he rejoined the 23rd Battalion and deployed to France in May 1916. He was wounded in action on 3 May 1917 and evacuated to England for medical treatment. After recovering, he returned to France on 15 February 1918 and then was killed in action in Belgium on 28 March 1918. He was buried in the Rosenberg Chateau Military Cemetery and Extension however his grave was one of five destroyed in later battles. He and the other four soldiers are commemorated on a Special Memorial Cross in the Royal Berks Cemetery Extension, Hainaut, Belgium. 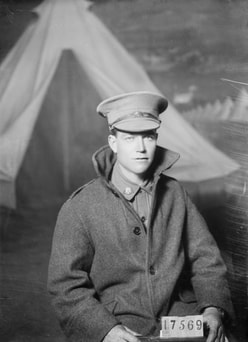 Studio portrait of 6911 Private (Pte) William Emanuel Wallman, 23rd Battalion from Pinnaroo, South Australia. A 26 year old farmer prior to enlisting on 24 October 1916, he embarked for overseas with the 19th Reinforcements from Melbourne on 11 May 1917 aboard HMAT Ascanius. After further training in England, he joined the 23rd Battalion in Belgium on 24 February 1918. Pte Wallman was killed in action less than a month later, on 22 March 1918 and is buried in the Berks Cemetery Extension. 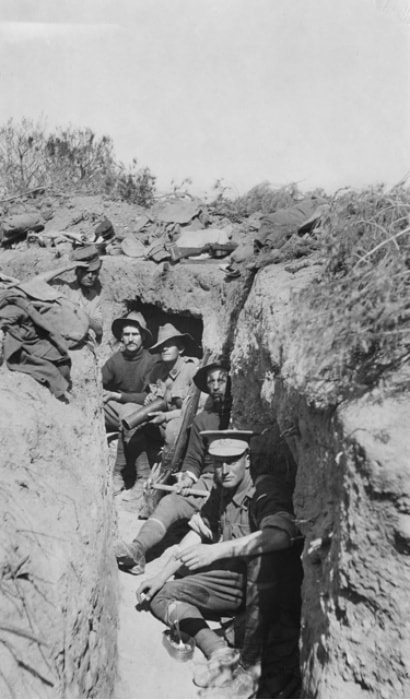 Men of the 8th Battalion in an abandoned Turkish position on Bolton's Ridge.
Identified 2nd from the front and buried in this cemetery is 617 Lance Corporal Sam Wilson, 8th Bn. Australian Infantry, A. I. F. who was killed in action on 29th June 1916, aged 37. Plot I. B. 4. Son of William Wilson, of 11, Chelsea St., Brighton, Victoria, Australia, and the late Fanny Wilson. Inscription "Youngest Son Of W. M. Wilson Of Dimboola And Brighton, Victoria"