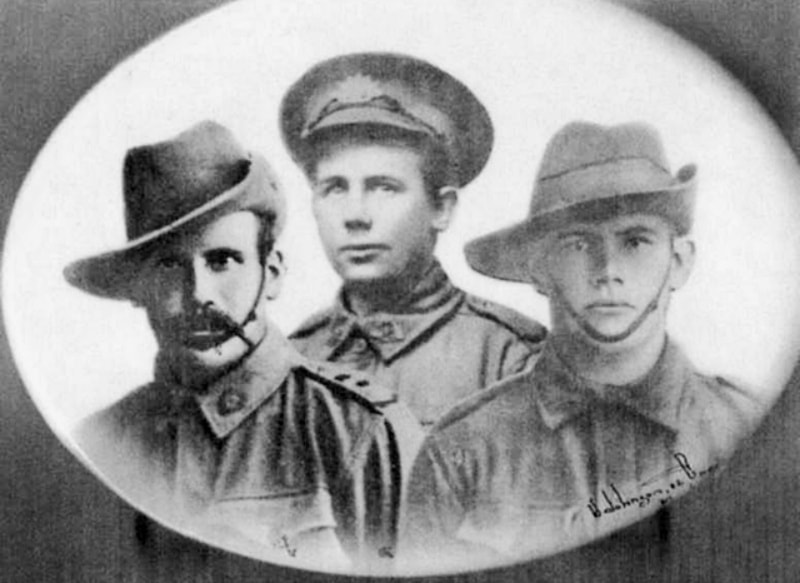 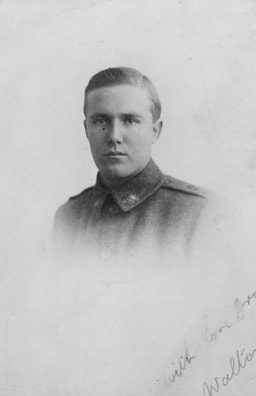 Studio portrait of 1134 Bugler Henry Walter Seymour Dumbrill, 10th Battalion, of Semaphore, SA. An engineer's apprentice before enlisting in October 1914 at the age of 16 years and eleven months, Bugler Dumbrill was a pre-war member of the 77th Battalion Military Cadets and left Australia for Egypt with the 1st Reinforcement in December 1914. He spent two months on Gallipoli before being evacuated with influenza, and rejoined the battalion in England in February 1916. Arriving in France for service on the Western Front in July 1916, Bugler Dumbrill was killed in action at Mouquet Farm on 23 August 1916, aged 18. 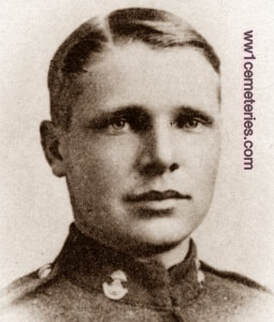 Image does not enlarge
​ 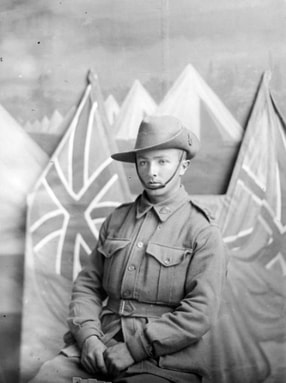 Inscription "In Memory Of The Loved Son Of Mr. & Mrs. Fogarty Of Tasmania"

A letter carrier from New Norfolk, Tas prior to enlistment, Pte Fogarty embarked with the 13th Reinforcements from Melbourne aboard HMAT Afric on 5 January 1916. On 22 August 1916 he was killed in action at Mouquet Farm by a High Explosive Shell in the Somme area of France, aged 21. 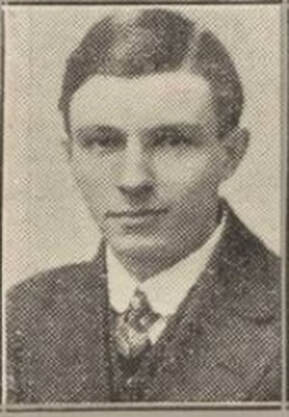 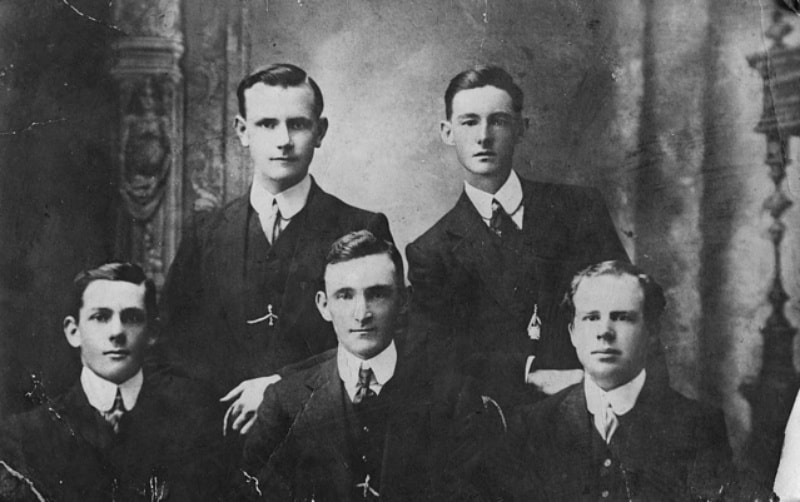 Studio portrait of five men, including two brothers, Percy and Bertie Gardiner. Standing, back right is: 854 Private (Pte) Percy Theodore Gardiner, H Company, 13th Battalion, of East Maitland, NSW. A machinist prior to enlistment on 26 September 1914, Gardiner also served with the 16th Infantry, Citizens Military Forces. He embarked from Melbourne aboard HMAT Ulysses on 22 December 1914. He was killed in action on 29 August 1916 near Albert, France, aged 19 years. Son of Theodore Coster Gardiner and Zenobia Winifred Gardiner, of Hope St., Wallsend, New South Wales. Native of East Maitland, South Australia. Plot VI. E. 19. Inscription "Dearly Loved We sadly Miss Him He Was One Of The Best Of Sons" 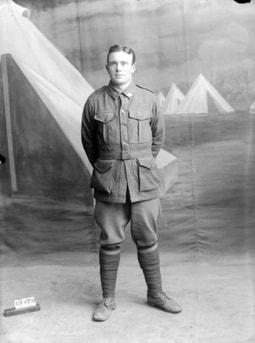 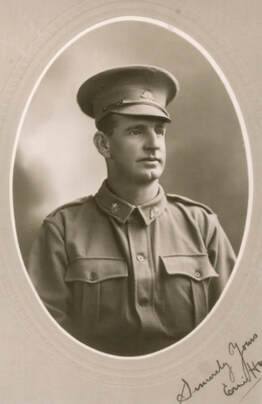 Inscription "Only Brother Of A. G. Hughes Of Gilberton, S. Australia"

Studio portrait of 836 Private (Pte) Alfred Ernest (Ernie) Hughes, D Company, 27th Battalion, of Gilberton, SA. Formerly a gardener and a driver, Pte Hughes enlisted on 23 February 1915 and embarked from Adelaide aboard HMAT Geelong (A2) on 31 May 1915. He served on the Western Front and he was killed in action at Pozieres, France, on 4 August 1916, aged 36. 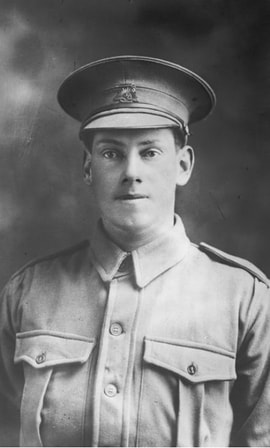 Inscription "In Memory Of The Dear Son Of R. & M. Hunt Thy Will Be Done"

Studio portrait of 4219 Private (Pte) William Hunt, 14th Battalion, of Mount Egerton, Vic. Pte Hunt enlisted on 19 July 1915 and embarked aboard HMAT Demosthenes on 29 December 1915. On 12 August 1916 he was killed in action at Pozieres in the Somme area of France. 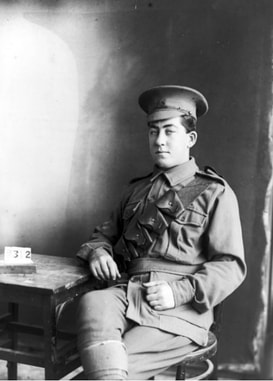 Studio portrait probably of 2392 Private (Pte) Edward A Johnson, 5th Reinforcements, 24th Battalion, of South Melbourne, Vic. Pte Johnson enlisted on 12 July 1915 and embarked from Melbourne aboard HMAT Osterley on 29 September 1915. He was killed in action at Pozieres, France, on 22 August 1916. 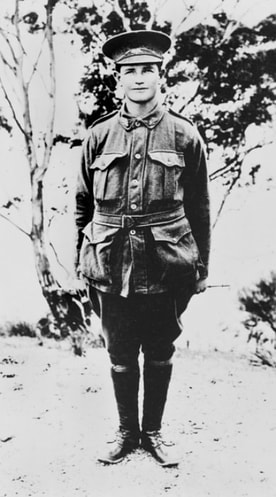 Studio portrait of 5120 Private (Pte) Alfred John Jones, 12th Battalion from Zeehan, Tasmania. A 21 year old labourer prior to enlisting on 29 October 1915, he embarked for overseas with the 16th Reinforcements from Melbourne aboard RMS Orontes on 29 March 1916. Shortly after arriving in Egypt, he proceeded to France where he joined the 52nd Battalion in July 1916. Pte Jones was killed in action on 4 September 1916 at Mouquet Farm, Pozieres and is buried in the Courcelette British Cemetery, France. 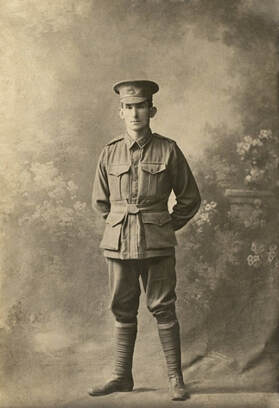 Studio portrait of 3803 Private (Pte) David Hamilton Kunkler, 49th Battalion. A farmer from Coraki, New South Wales, Pte Kunkler enlisted on 23 September 1915 and embarked from Brisbane aboard HMAT Itonus (A50), on 30 December 1915. Pte Kunkler was killed in action in France on 4 September 1916, age 33.